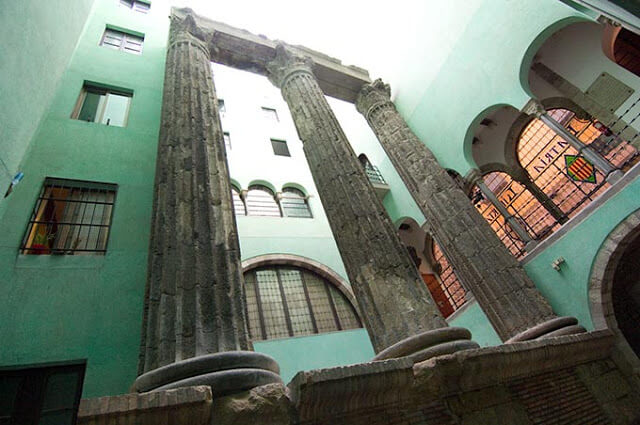 1. A secret in the Gothic Quarter: the ruins of the Temple of Augustus
Walking through the Gothic Quarter, with its tangled streets and its combination of architectural styles. But if there is a corner that is inspiring, certainly is the medieval courtyard on Calle Paradís, 10. There you will find four columns that once had been part of the Temple of Augustus. They have over 2000 years old and measure 9 meters high.

2. New York em Barcelona: Library Arús
As one famous writer, even the infinite can be found in an encyclopedia. But finding a Statue of Liberty, original nineteenth century, Arus na biblioteca, it is incredible? True, it is a smaller size, but it is still a beautiful connection between Barcelona and New York. If you want to see it you just have to go to Paseo San Juan, 26. Besides the statue, you will discover one of the most beautiful city libraries. 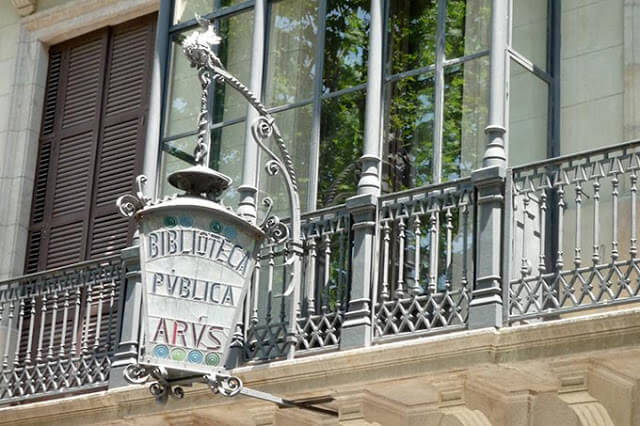 3. Discover Barcino through MUHBA and fall in love with St Chapel. Agatha
The headquarters of the Historical Museum of the City of Barcelona (Plaza del Rey s / n) It is a guaranteed way to know until the last of nooks and crannies to hide in the bowels of Barcelona. His visit to the archaeological site from Roman times, visigótica (Século VII) and medieval (XIII). For out of the itinerary is completed with a visit to the important medieval buildings, as St Chapel. Agatha sheltering objects, Jaume Huguet, in the fifteenth century, It is one of the most important Catalan Gothic artists. 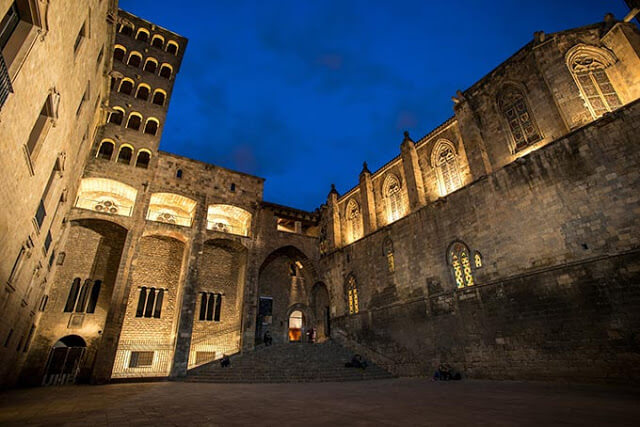 4. Anti air refuges
The recent history of Barcelona hosts lurid chapters, some of them still palpable if you are willing to look for them. A civil war 1936 and its bombing, forced to perform real engineering works underground to ensure the survival. Today, some of these shelters are open to the public. This is the case of Diamond Plaza refuge, built with 13 meters deep, with a length of 250 meters and capacity for 200 people. To visit you must make a reservation by telephone before +34 932 196 134. It is also interesting to dive into the call “under 307” (Nou de la Rambla), 169. Consisting of 400 meters of tunnels 1,6 m wide and 2 meters high, and they can still be distinguished the 4th, such as bathrooms or nursing. 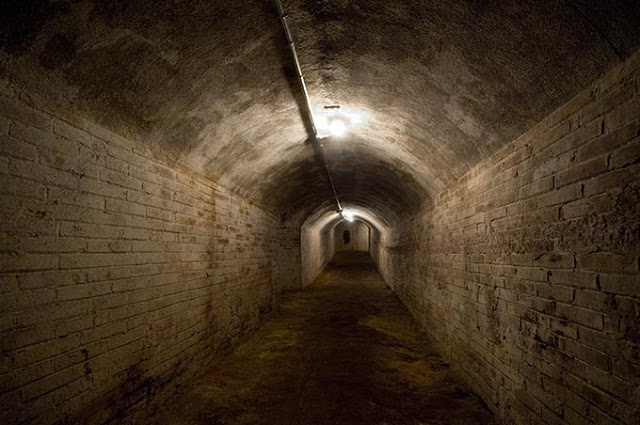 5. silent witnesses Sant Felip Neri in the church
The Plaza de Sant Felip Neri became one of those places of serenity and silence full of meaning: a reflective space in the middle of the Gothic Quarter. And in front of the church of the same name that still presides holes shrapnel made in aerial bombing 1938. This attack killed 42 refugees who were hiding in the basement of the convent can be seen. Later, in the picture, when the church was restored. 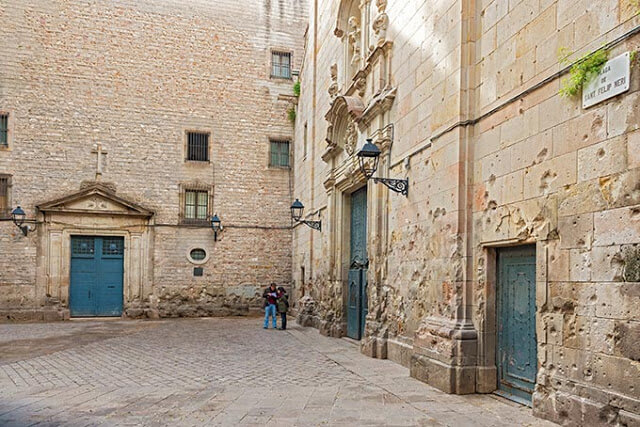 6. Following the trail of the Roman aqueducts of Barcelona
It is known that Barcelona had two aqueducts to carry water to the city: a river Besós and another Collserola. Both came to New Plaza, where you can see a reconstruction of the aqueduct, besides the two watchtowers that still remain and gives a unique feel to the whole place. 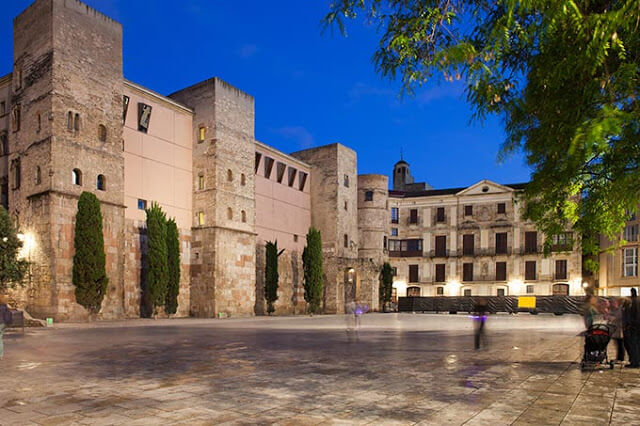 Another trace of the conduit are in Calle Duran y Bas, até Plaza in March 8. As part of the partition wall of a building and creating a gloomy atmosphere, four arches of what was this beautiful structure now almost seem a mirage.

7. The exoticism of oriental Casa Vicens
On Calle Carolinas, 24, Gracia, It is one of the most fantastic city buildings designed by one of the most acclaimed modernist architects, Antonio Gaudi. This is the Casa Vicens, a building full of imagination with oriental touches and surprising ways. Contemplating its facade is beautiful. However, for not being in the center of Barcelona and not be open to the public, Casa Vicens goes unnoticed by most travelers. What makes it one of the selected locations that still remains protected from mass tourism. 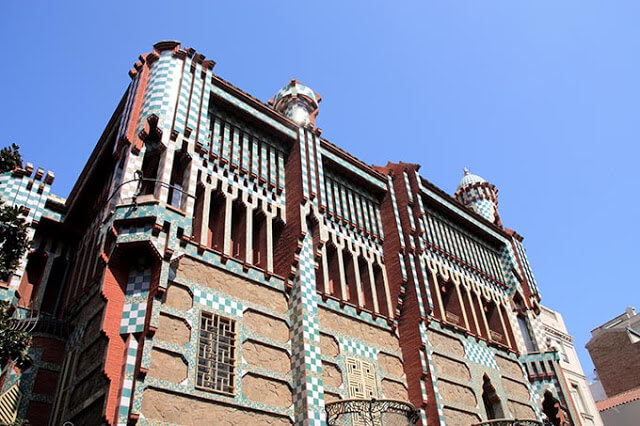 8. The most popular source: La Font del Gat
La Font del Gat is one of the most popular sources of Barcelona. I sculpted by Antoni Homs 1918, It was a popular meeting place for picnics. Thanks to a song 1922 composed by John Amich, the source acquired a prominent role in Barcelona folklore. It is located in one of the most beautiful city gardens, Laribal Jardins (Tapioles street, 10), you will immediately understand that it is in these places that exude a special force. 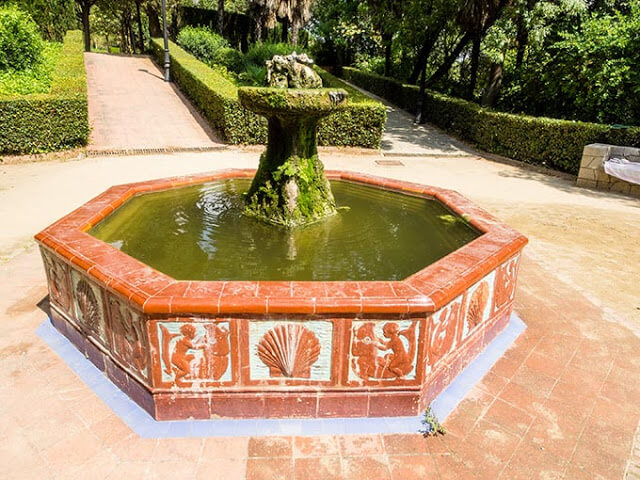 9. The Chapel of St. Matrona, the holy unknown patron saint of Barcelona
During the middle ages, Montjuïc was a place full of chapels and shrines, but all of them, the only one that survived is the Ermita de Santa Madrona (1403), that Calle Montanyans. It is a place full of mysticism by all the legends that have sprung up around them. 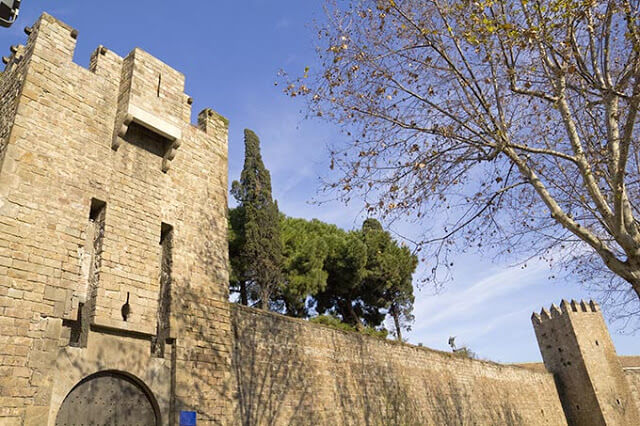 Some traders moved the saint's relics to Marseille, but the ship was wrecked in front of Montjuïc, then, interpreted the desire of the saint was not being hosted outside of Barcelona. In 1563 he was declared patron saint of Barcelona, although, is little known. Today the chapel is open once a year, on the fourth Sunday of Easter.

10. Works of urban art, a secret in plain sight
Our last point is dedicated to rediscover two corners of the city in which artists have erected their works. First, a famous painting by Keith Haring “All AIDS”, now restored in an outer wall of MACBA (Square Anjos). Nas Ramblas. When you least expect it you will be treading a beautiful work of Miró art inspired by the cosmos. If you look closely you can distinguish pure colors and shapes that characterize the style of children.

He feels like traveling after so many tips? The Blog TurMundial gives you even more tips to ease your travels: Want to book a hotel? Book hotels with great prices by Booking. Want to book an apartment, home, boat or even a tree house and still win 100 real in his first stay? Book all these and many other choices of places with great prices by Airbnb. Want to buy advance tickets for various attractions and tours without those huge queues? Buy Ticketbar Want to rent a car? Undoubtedly indicate the Rentcars.com it seeks the best cars and market values. You need to send or receive money to / from abroad, without paying those absurd charges of bank or exchange houses it Wise You want to avoid problems in the middle of his long-awaited trip? Hire a travel insurance with any of these companies Real Travel Insurance, or insurance Promo You want to avoid those sky-high mobile bills at the end of his international trip? And yet able to do, receive calls and use the internet? Buy an international phone chip with any of these companies: OMeuChip OBS: We emphasize that the responsibility for providing the services / sale and delivery of products, suppliers are described above.
CategoryEurope What to do in Spain?
Tags10 Barcelona Arus library Casa Vicens Catalonia Europe What to do in Spain? shelters secrets Temple of Augustus

New partnership between TurMundial and TransferWise

Indication of hostels and hotels in Barcelona