Bar, na on the coast of Montenegro

May 9, 2019 0 By Christian Gutierrez and Priscilla Gutierrez

Bar It is a city on the south coast of Montenegro, very close to the capital, Podgorica, Bar is very visited because of its extensive coastline and to be more than 2 hours from the center of the country.

We went to Bar on a road trip and we did a route between BiH and Montenegro, Here we begin to part of the journey from the beaches, before we visited the interior of Bosnia s Montenegro we passed by Trebinje, Stolac, Mostar, Blagaj, Sarajevo, Ostrog e Podgorica. 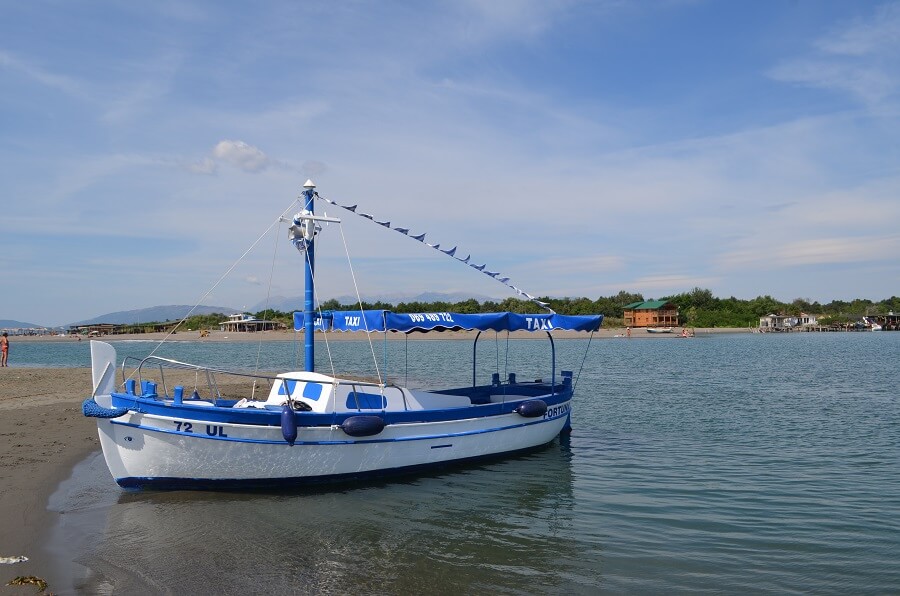 We arrived at night in the city since before we had visited the capital, and we went straight to our hotel that was right near the beach overlooking the sea, or hotel Apartments Saric it's very good, super recommend, the owner is a love, even not knowing how to speak very good English was super helpful, the room was great with everything we need, We chose the hotel because it had kitchen in the room, so we can buy food for breakfast and dinner, so the trip is cheaper, the lunches we ate out or take food to the beach, here in Europe it is very common. 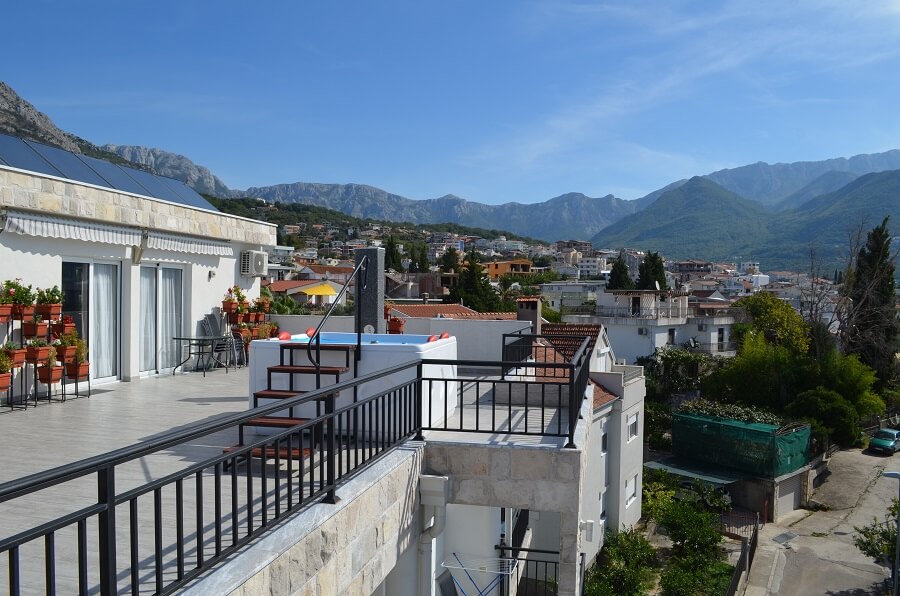 as we had 6 days to know the entire coast of Montenegro, We divided in three cities base to visit the beaches that were: Bar, Budva, e Kotor.

Attractions Bar and what are the most beautiful beaches in Bar?

As I said on the first day we arrived at night, the next morning we were early in the supermarket to buy food and drinks, almost corner of the hotel has a supermarket, already bought items for several days of beach.

A very funny thing is that nowhere in Montenegro sells ice, in order to take the beers to the beach we had to turn around and ice the whole trip, We seek everywhere you can imagine, large markets, markets minis, gas station, they said that maybe it would have in a fish shop, but we do not think, so we made with some cups they sell in the markets that they look like plastic bags, earlier also picked to, but then we aces lol .

After securing the purchase went to our first stop the Beach Saranda and Florida no extremo on from coast, almost on the border with Albania, that we almost know also, but as the beautiful beaches of Albania were far, We leave for an upcoming trip, Beach Saranda is a very fine sandy beach but not too white, a beautiful beach, but not close to the other beaches we know in Montenegro.

A Beach Florida It is a nude beach, not only the beach but the whole complex is nude, camping, hotels, bar, is all to practice nudism, even scared at first, but then we got used, and even for the first time in life we ​​also decided to try and make nude seeing what it felt, at first it was a strange feeling, then comes the feeling of freedom, and as the beach is too long or were very close to others, then we were almost home already lol. 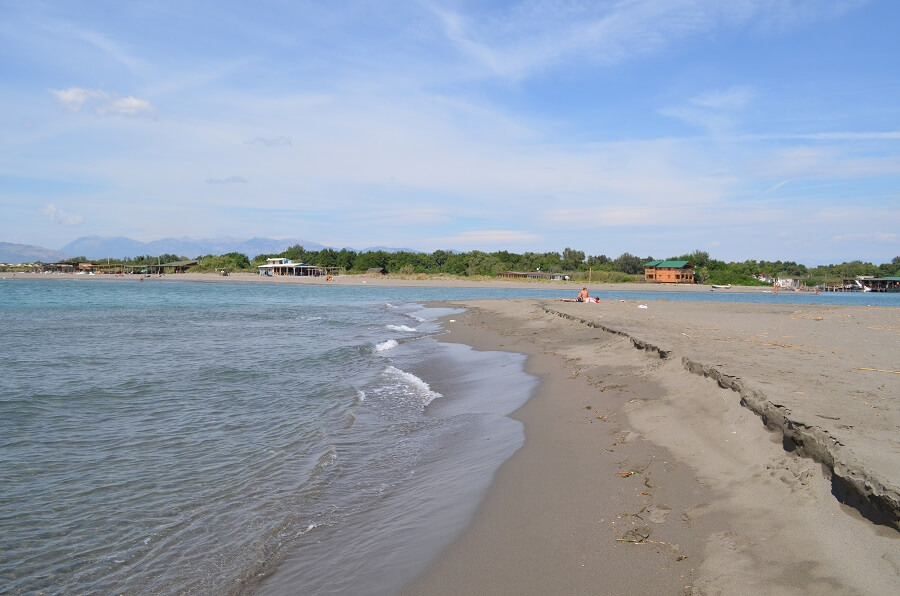 Like the first two beaches were not very pretty afternoon we went to other beaches, passed first by the beach were quite time it was of Valdanos beach, a stone beach but with the color of the very blue sea, pretty well with a few people, had only a kiosk but with a good drink price, since our beers were already hot. 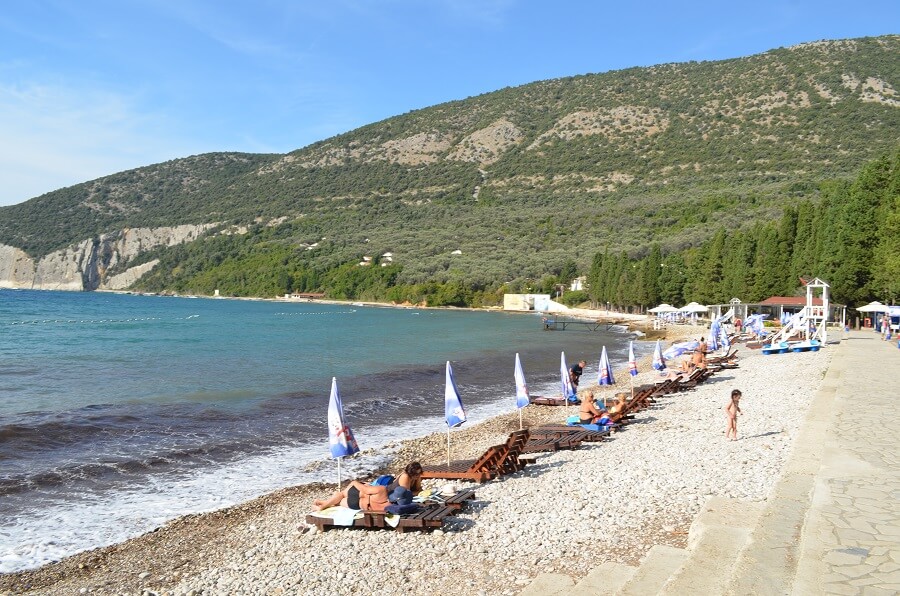 Then we went to a small cove Praia de Paljuskovo another beach and beautiful stones and there enjoyed the late afternoon and we enjoyed the sunset. 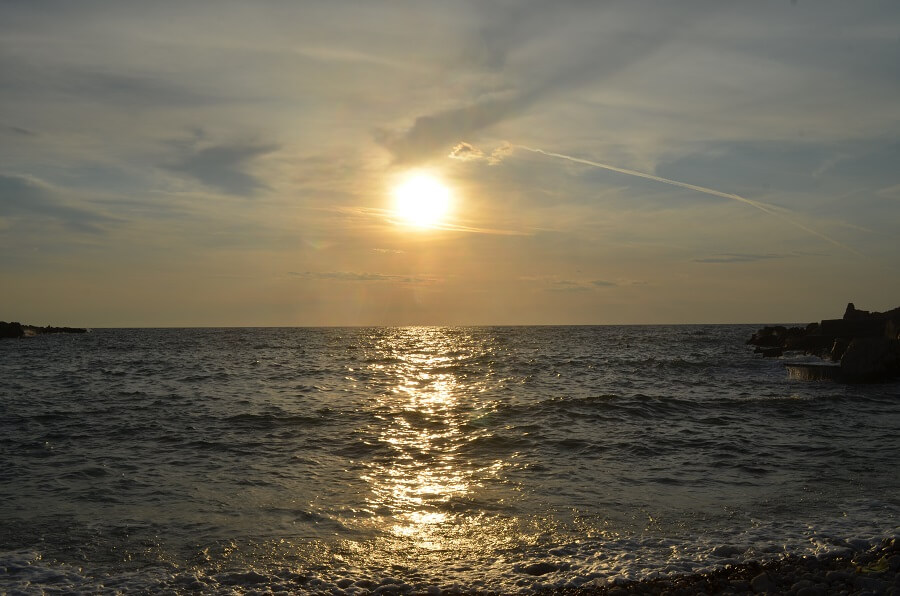 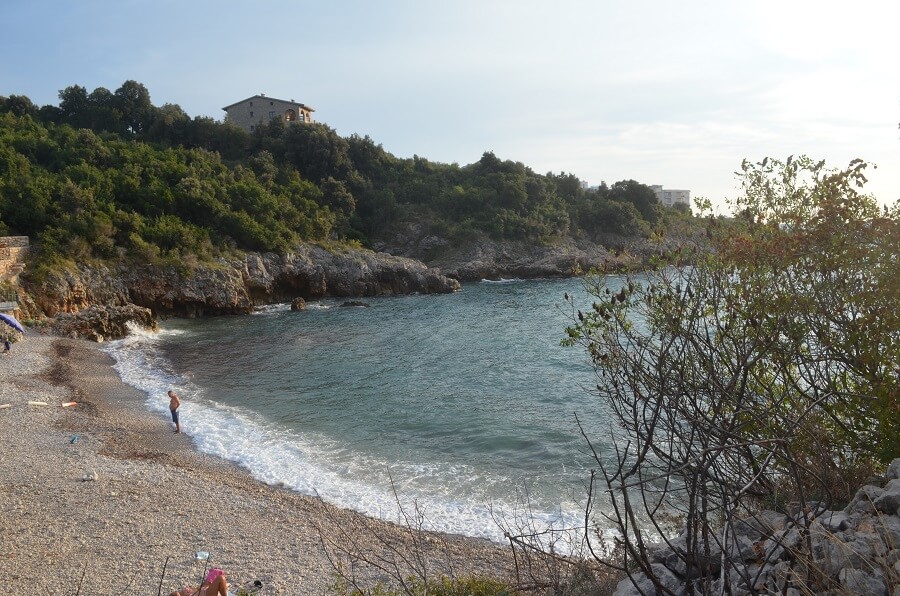 Returning to the hotel took advantage of the jacuzzi which was at the top of the building on the roof.

The next day we went to other beaches have towards Budva, where we stayed another two days.

The first day was the beach Cape Kricevac We strolled a little bit for it. 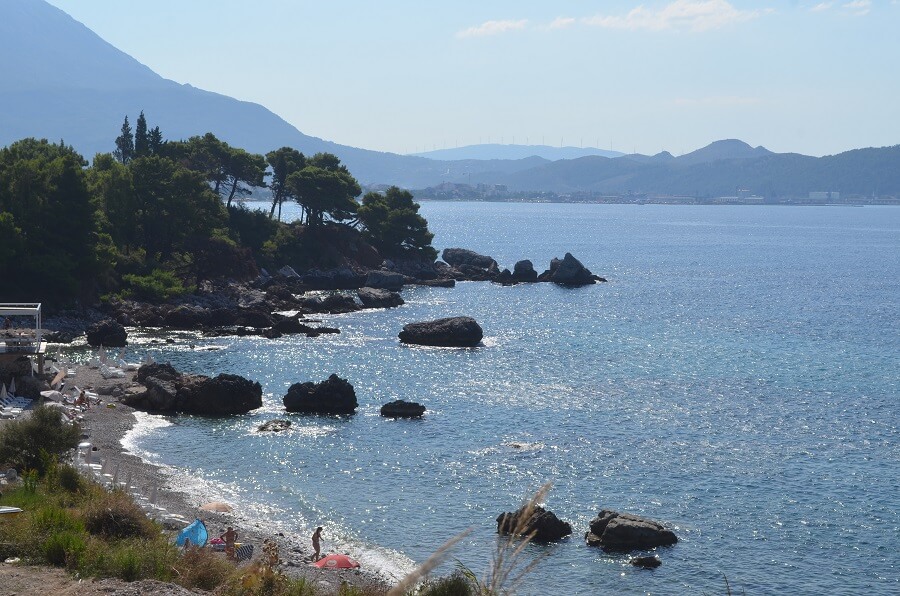 Another beach we visited was the beach Maljevik 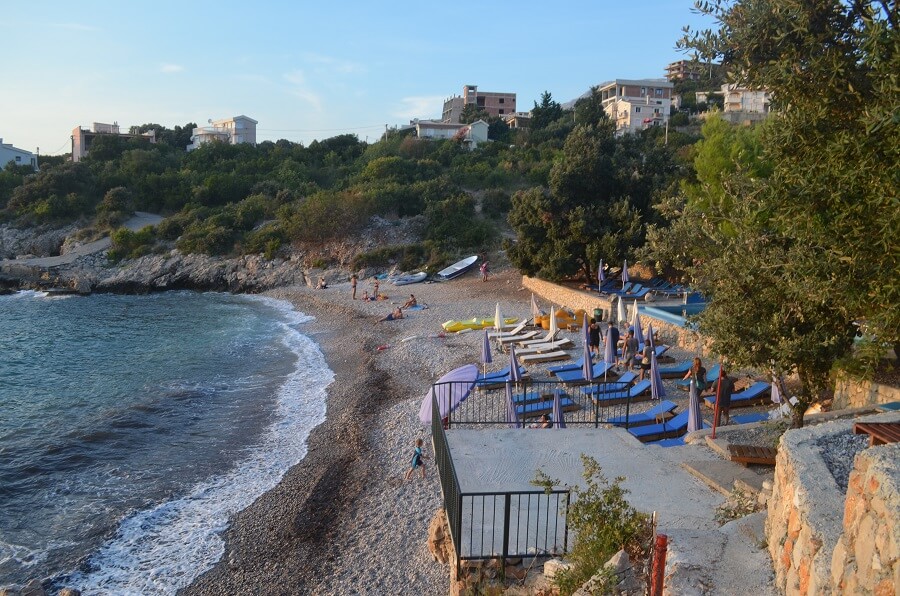 But where we stayed most of the day were the two praias of Sveti Stefan, an ancient medieval town on a small island, very beautiful place, one of the most beautiful beaches in Montenegro, but today is a resort, then you have to pay to enter or book the restaurant within the island, which is not cheap, but just so you can know the island inside, We decided not to know inside, but the view from outside is amazing, worth it anyway, as the place is very beautiful and has lots to do, wrote an exclusive post on Sveti Stefan. 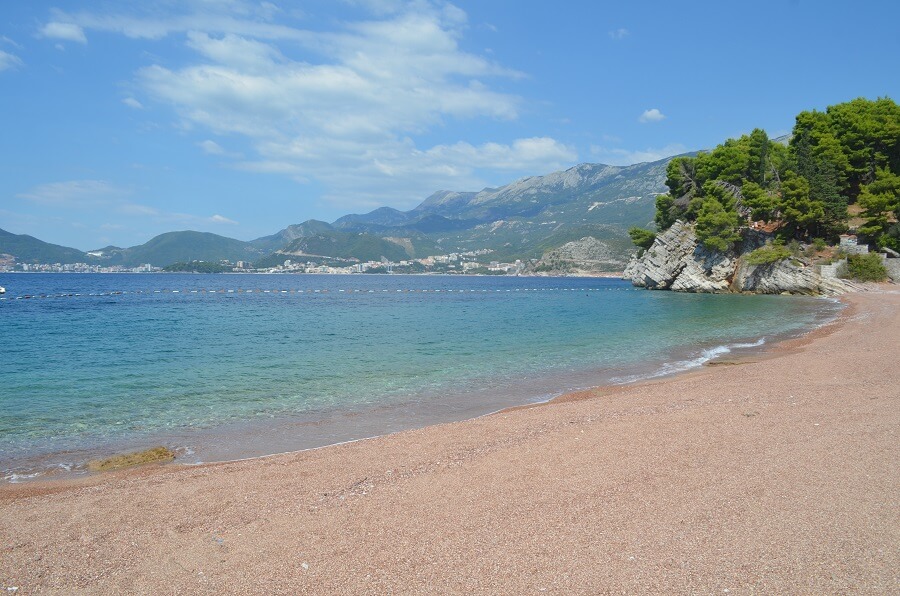 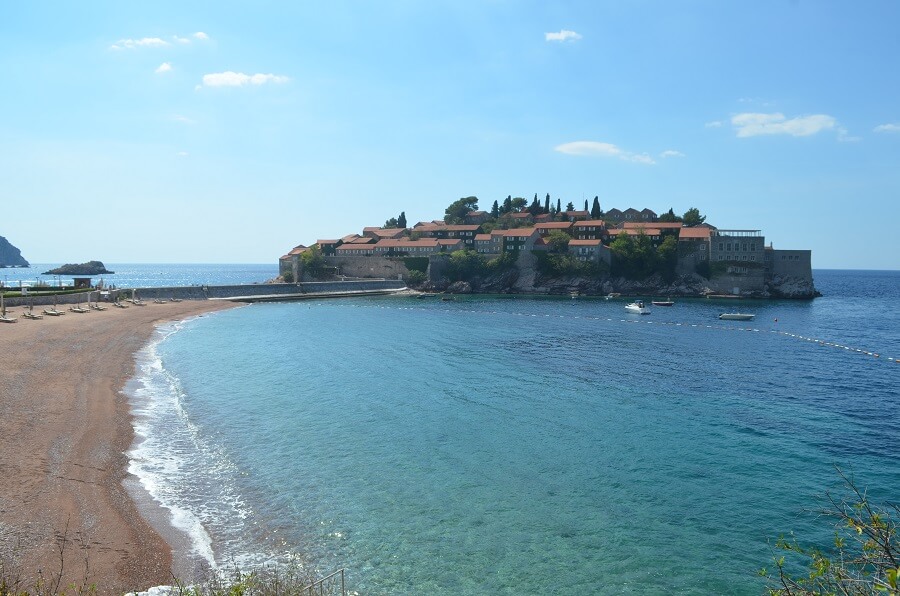 This was our passing by Bar, next stop, Budva.

Things to Do in Podgorica: a capital of Montenegro