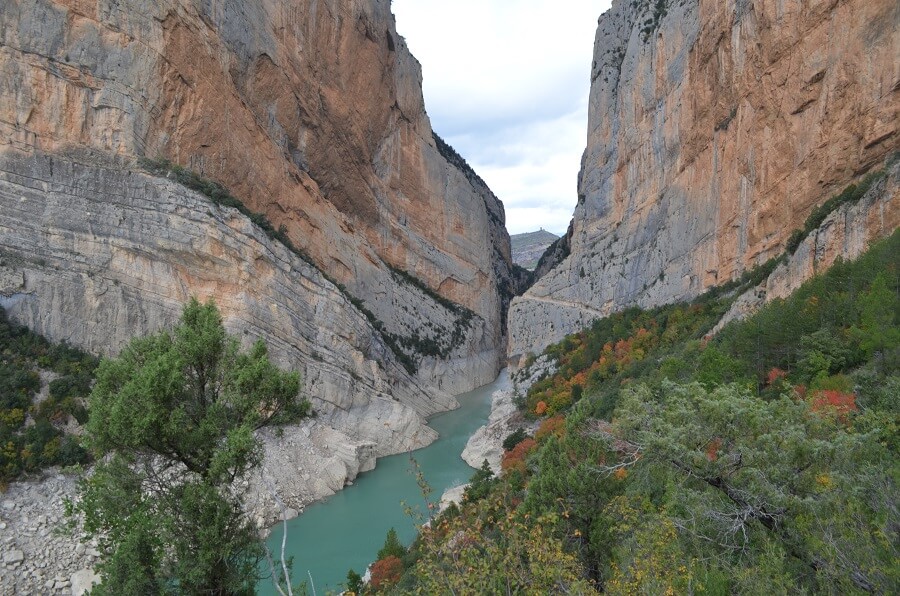 In November holiday made our first trip and Motorhome, in one of the stops visited the Mont-rebei, located between the provinces of Lleida (Catalonia) e Huesca (Aragon). Considered one of the most impressive natural jewelry and least known of Catalonia, but his fame has grown and the number of visitors, so it's good to go before getting massiveness. Com post, we want to show this natural setting of charm in Spain, ideal for a weekend getaway. 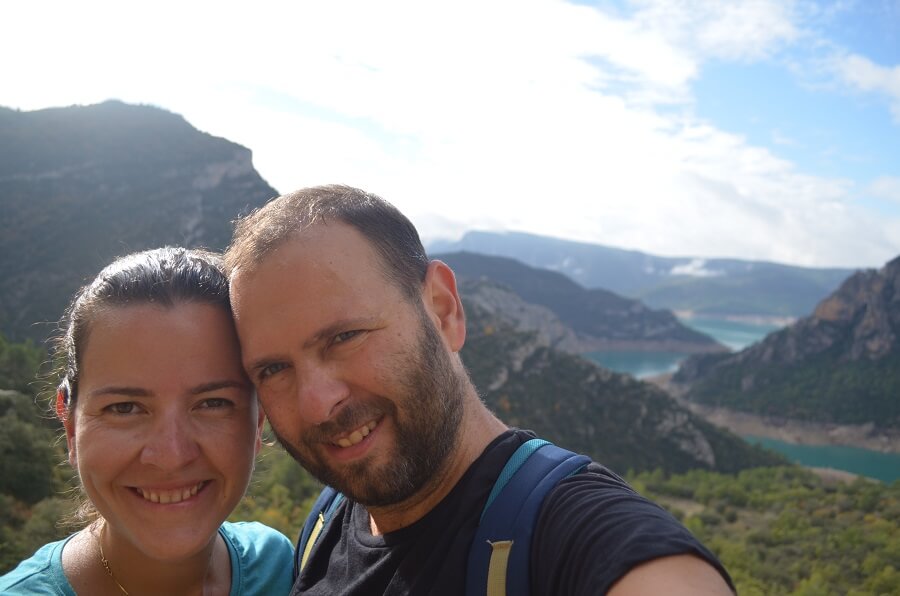 What is the Congost de Mont-rebei?

O Congost de Mont-rebei is made up of canyons (gorges) and the river Noguera Ribagorçana passes among them that crosses from north to south. The Mont-Rebei of Congost is located between the regions of La Ribagorza (Aragon) and Pallars Jussà (Catalonia) and can be reached on foot from different points, car parks and trails , although the most popular is the access of La Masieta, where you have a business structure for tourists. Carved a path in the rock allows go all the gorge on the edge of the cliff and get views like the ones you see in the pictures. The Mont-rebei of Congost is protected and managed by the Fundació Catalunya – The stone, the same that takes care of Casa Milla by Antoni Gaudi in Barcelona. 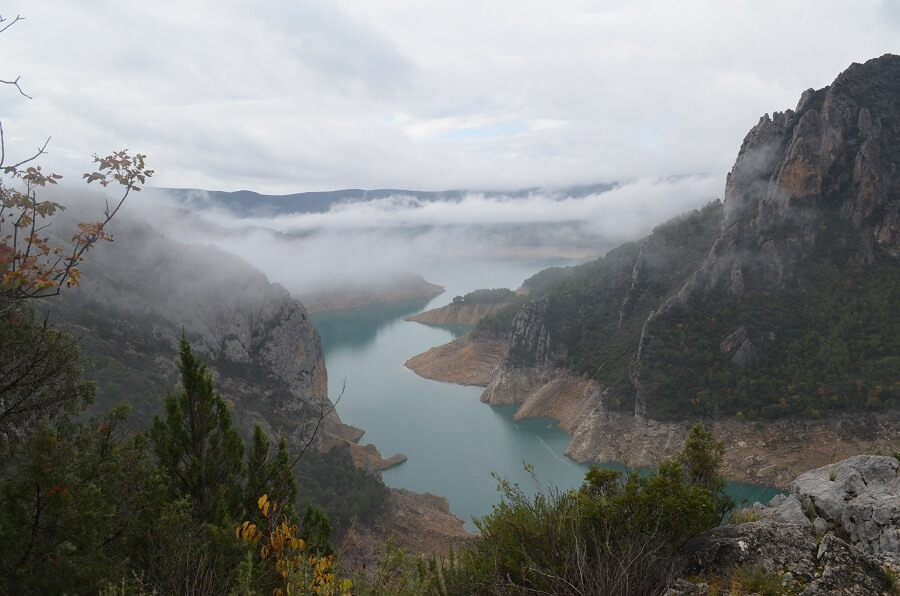 The road that runs through the Congost de Mont-rebei is part of the GR-1. There are at least three options to do this tour: the shortest and simplest option is to make the signposted route that goes from north to south of La Masieta car by the end of the gorge. The road is quite simple, about 3,5 km and you need about 1hr 45 to make the outward journey. You can extend the walk to the second suspension bridge, that crosses the gorge or Seguer (+ 1 km) e, once encouraged (or not) down the steep wooden stairs built in the wall leading to the lodge of Montfalcó.

The second option, for a little more advanced hikers, It is to make the road south to the north from the chapel of the parking “Mare Déu of Pertusa”, PERTO Corçà, until after the second suspension bridge in the gorge (near 8 km de ida). In our visits, we chose the second option, because as we were with a Motorhome, the location of the car park was good for this type of vehicle, the first was not possible to go with a MotorHome. A third option, in this case of Aragon, It is to make the Montfalcó hostel route to Congost. 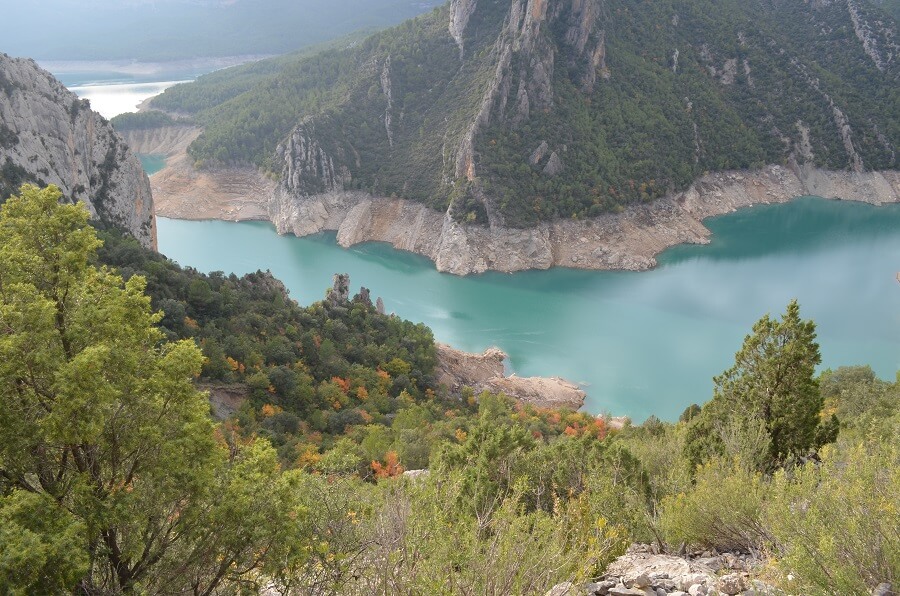 O estacionamento The Masieta, which has a place of information, It is open in the high season 07:30 at 20h and 8:30 17h the rest of year. On the official website, you can check the detailed schedule. In the days that pay (5 € per vehicle), it is convenient to book a place online. parking, is very easy to reach the gorge following the signposted path that runs along the river.

After walking a little less 2 km along a beautiful path that crosses an open field, a first suspension bridge is traversed (not suitable for people with vertigo) and soon the canyon entrance is already visible, the most impressive part of the tour. In the first meandering river, among the rocks, you have is with your mouth open in front of the huge walls of up to 500 meters high, but it is best to enter the canyon itself and see how it extends the distance and through which the road carved into the wall. 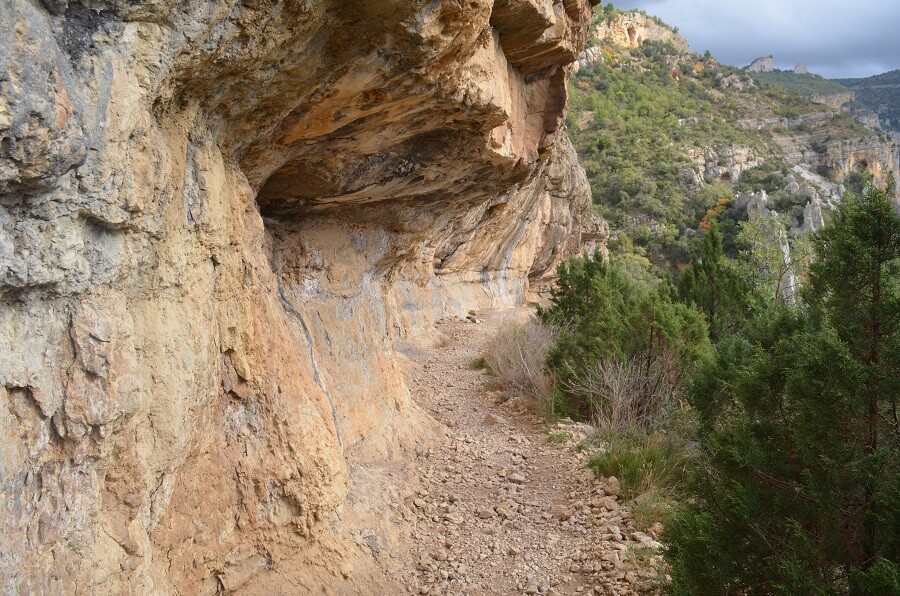 To exit the canyon, it forces the monitor and you have time, we recommend you go to the suspension bridge Congost del Seguer. Although you add 1 km to the route and in this area it has slopes steeper, worth getting for two reasons: the first is the view from Congost from that point and the second is that you can go down (and return) for a few minutes. wooden steep stairs that run vertically rock and connect with the route of Montfalcó, in Huesca. To achieve them, it takes up about 6 m along a path quite steep, but those who did recommend the experience.

As for the way back, nothing to add, since this is the way to undo. Try to start too early or ride will be too late to find a place to eat in fact, It is quite advisable to bring some snacks and drinks in abundance, because even car areas “civilized” They are somewhat distant. And if you go in winter, keep an eye on the time of day, so that the darkness will not surprise you along the way.

hermitage of the parking route “Mare Déu of Pertusa” – Mont-rebei

It's about 16km to and by incredible scenery, the path is very quiet despite being long, this route is also quieter for people with vertigo.

The trail passes through several mountains, valleys and breathtaking views, at the end of this path you will reach the end of the first route and may also go on the suspension bridge and the driven side stairs in the mountains of Aragon. 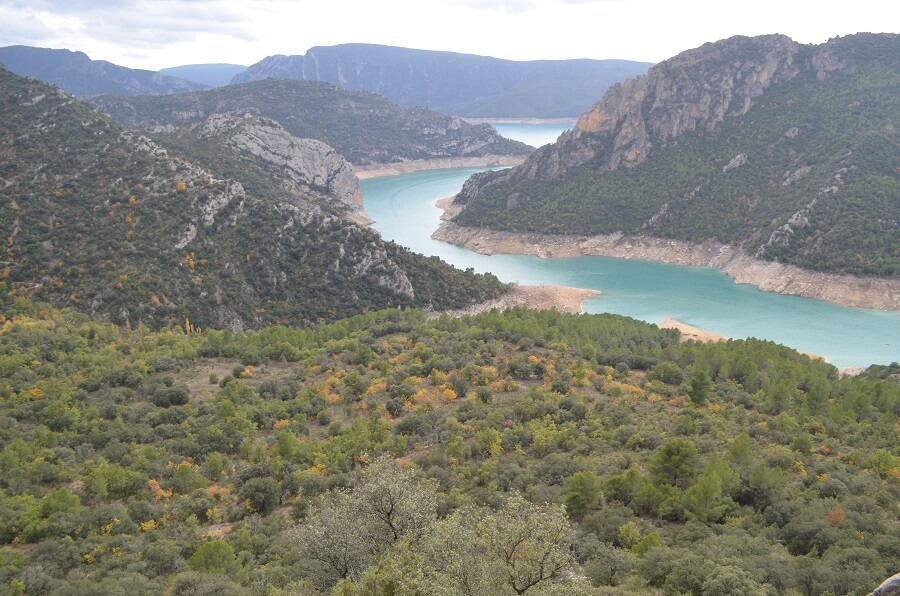 This track has far fewer people because they do not have the structure of the first route, the other route, when the two come together near the bridge, It has much, but many people, if you like trails quietest and few people this is the best, but the ideal is to know the two or three routes. 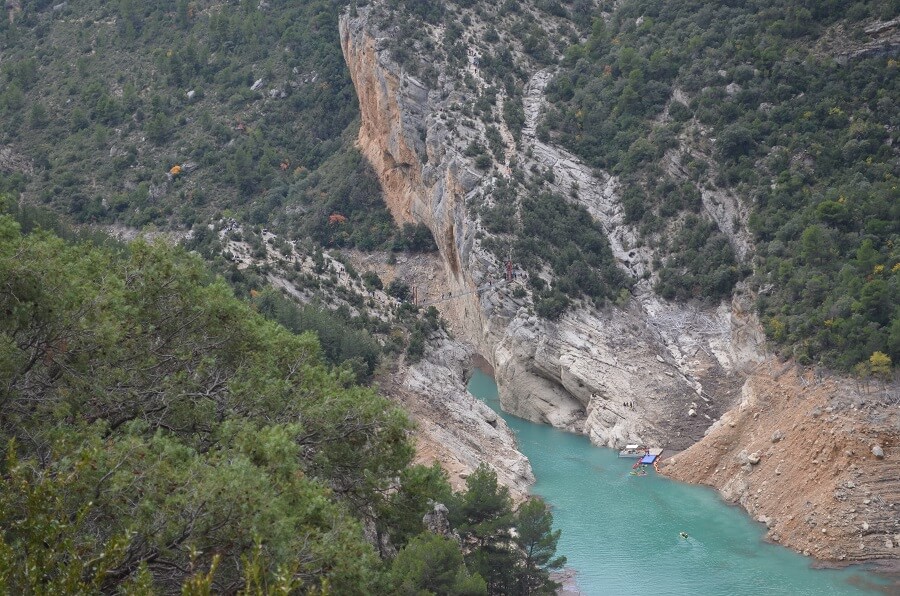 as we speak, It is very important to take plenty of water and food, since the middle of the track has no structure, and plan the time it takes to do the walking, if back in the evening take these lanterns put on the head.

The parking lot of the Ernica, where we left the Motorhome, It has beautiful views already in the parking lot, then after the walk the trails were on the outside of the vehicle to enjoy this beautiful landscape. 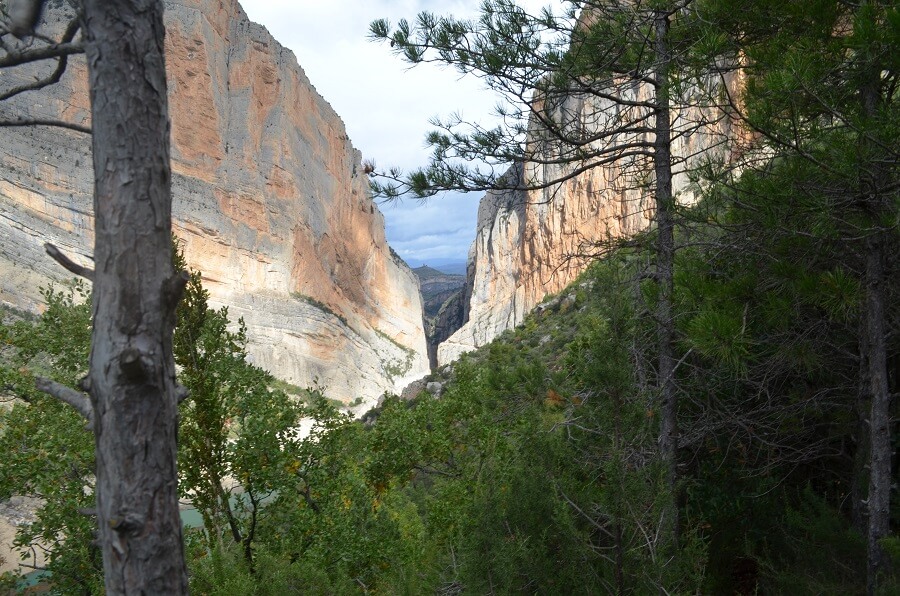 Want to know how was ourFull travel Motorhome? Here in this post. 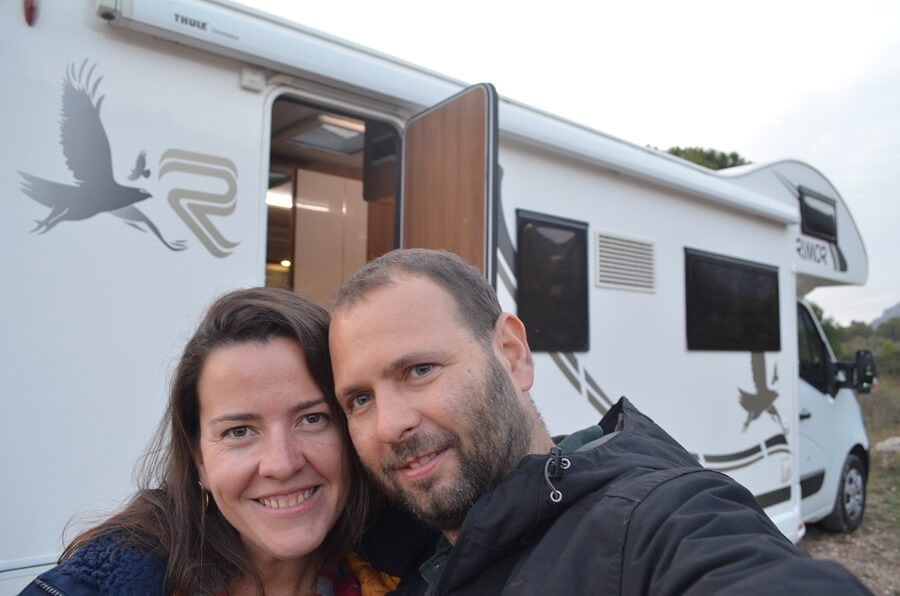 He feels like traveling after so many tips? The Blog TurMundial gives you even more tips to ease your travels: Want to book a hotel? Book hotels with great prices by Booking. Want to book an apartment, home, boat or even a tree house and still win 100 real in his first stay? Book all these and many other choices of places with great prices by Airbnb. Want to buy advance tickets for various attractions and tours without those huge queues? Buy Ticketbar Want to rent a car? Undoubtedly indicate the Rentcars.com it seeks the best cars and market values. You need to send or receive money to / from abroad, without paying those absurd charges of bank or exchange houses it Wise You want to avoid problems in the middle of his long-awaited trip? Hire a travel insurance with any of these companies Real Travel Insurance, or insurance Promo You want to avoid those sky-high mobile bills at the end of his international trip? And yet able to do, receive calls and use the internet? Buy an international phone chip with any of these companies: OMeuChip or with the or with the OBS: We emphasize that the responsibility for providing the services / sale and delivery of products, suppliers are described above.
CategoryEurope Motorhome What to do in Spain?
TagsAragon Aragon canyon Catalonia gorge Mont-rebei gorges destination RBBV Europe motorhome What to do in Spain? routes tracks

Motorhome hire in Spain and Europe