You are in Barcelona for more than 5 days, or came for the second time and do not know where to go? How about making a day trip to Colonia Güell?

Cologne Güell is another masterpiece of Antoni Gaudí, that Eusebi Güell service designed several buildings in the textile colony which is 25KM from Barcelona. This is the colony Güell, one of nearly a hundred textile colonies that were in Catalonia at the time of the nineteenth century, It has churches, homes and schools designed by Gaudí

The Güell Colony has it all: the old cooperative – Now an interpretation center – the school, past the homes of employees. Here we will tell a little of our visit there, we drove there as we were returning from a romantic weekend where we rented a house in Airbnb sixth, Saturday and Sunday in a wonderful glass house that always wanted to stay in a, with panoramic views of the mountains and the sea, in the city of Pallejá, close to Barcelona, on the way Barcelona (city ​​to live) decided to stop the Colonia Güell, since we had plenty of time before returning the car at the airport, where we had rented with Rentcars. 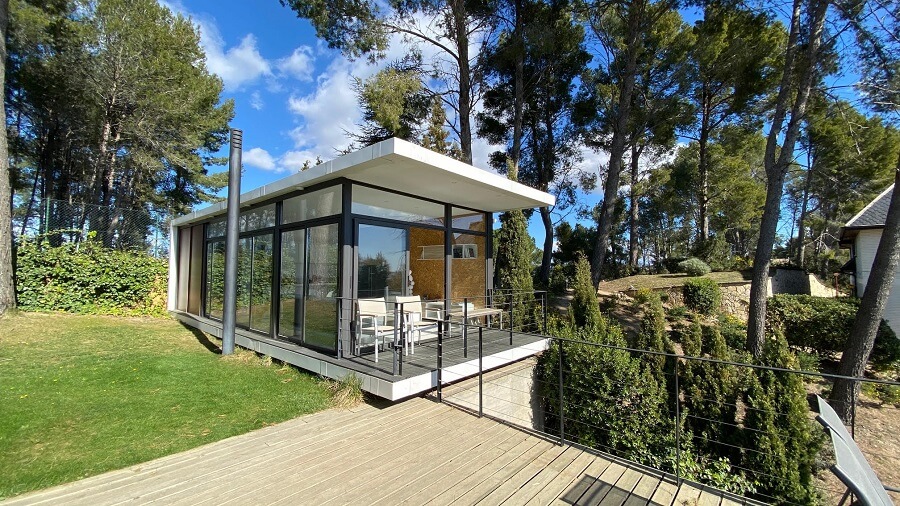 We went by car which is one of the options, but there are other ways: by bus, train or book an excursion.

A short story about the Cologne Güell: Its origin and Eusebi Güell

The father of Don Eusebi, Don Joan Güell i Ferrer, He made his fortune in the Americas, with the slave trade. The family fortune, back to the Old Continent, It grew with the textile industry. We speak of a family, two Güells, what – as estimated by Forbes – It would be one of 25 richest families in the world in the late nineteenth century and early twentieth century.

By the time Eusebi inherited the family textile factory in Barcelona – he decided to switch production to a quieter place, away from strikes and riots in the capital. In 1891, he offered work and home to three families. They were the first inhabitants of the new colony Güell. Unlike many other textile colonies in the region, Güell ordered the construction of the house of their workers to the image of the German colonies. houses among 100 e 120 sqm with garden in that in most cases served orchard.

think that, to get away from that convulsive Barcelona, they ended up settling in the Güell colony seems a contradiction in the XXI century. Your “flight” He did not yield nor twenty kilometers. But, At that time, these kilometers marked a sufficient distance to the capital.

Over the next twenty years, the colony Güell has not stopped growing. Its population reached 1.200 people.

for Guell, life was based on three fundamental pillars: job, religion and education. Therefore, the administrator of the factory, the priest and the teacher – with the doctor – they were “the personalities” colony. They ran the lives of employees and their families in Santa Coloma de Cervello city where is the colony, while Don Eusebi still living in Barcelona, Gaudí built him a palace and a park, or Guell Park

Life in the colony was governed by factory standards. Everyone worked on it: only women on looms and men in tasks “heavy” and positions of responsibility. Boys and girls attend school, although in different buildings and also different studies. The girls learned to read, writing and basic math, started working at 14 years. Children who demonstrate certain skills continued to study in the capital and, on his return, occupied positions of responsibility. Those who do not, how girls, started working at the factory to also 14 years.

Eusebius, besides building spacious homes, also commissioned the construction of a bar, the Athenaeum Unió that exists to this day and the Theater Fontova, already in 1892. From now on, on Sundays, they were full of activities: dances, theater, shows … Sim, Sunday was also the day when the women went to the laundry to wash clothes.

And that was all. Life was spent entirely within the colony that had all services – medical consultation with free assistance to workers – and the security that the Lord provided. If you think about it with the mentality of the XXI century, It may seem like a mix between exploitation, paternalism and almost kidnapping, but let us take for our century. Over a hundred years ago, work and live in a colony was almost like winning the lottery: a guaranteed salary, a house, Cheers, education, safety … Nothing comparable to the conditions of Barcelona or rural life. Things have changed a lot, but this was the first step.

The organization of the colony was in charge of the architects Francesc Berenguer and Joan Rubió, supposedly supervised by Güell and Gaudí. the buildings, also the work of the architects themselves, show the importance that the Lord assigned to the comfort of their workers. The most important inhabitants of the colony – or parent, the teacher, doctor and administrator – They had a house with higher education. The highest was the administrator who could see the entire colony of its tower.

A special mention deserves, of course, home Güell na Colônia: Can Soler de la Torre. Located near the factory, at one end of the colony, It was owned by the family until 1945.

Over the years, the plant's ownership changes, new buildings were built in the colony off the original plan. In 1945, the family sold it to another textile businessman, Bertrand i Serra. In the mid 60, the last houses were built, near 250, call “tram” by its form.

After knowing about the history of the colony now indicate what to see there:

The castle Salvana Tower is a fortress of the century X, located next to the historic complex of Colonia Güell, Santa Coloma my brain. 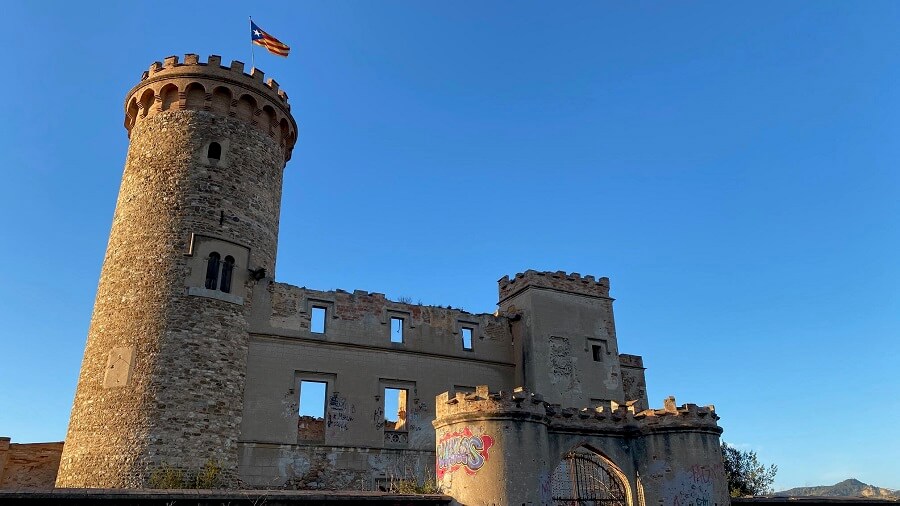 Romanesque castle dating from the tenth century, It has a tower defense feature in its structure, the first reference we have is the sale of the property Ennec Bofill by Count Ramon and in Emngol 992. As a result of the Civil War in Catalan 1224, the castle was partially destroyed. In the year of 1.297, James II buys the castle, keeping it on their property and their heirs for nearly a century and, no ano 1.390 It is sold to the city of Barcelona. In 1715, the castle is abandoned in poor condition due to the war between James I and Joan II. currently, It is in a state of disrepair.

A house and a school set joined by a bridge between them, built by Gaudí in 1900 and it was the home of the factory administrator. The apparent brick building stands out this geometric lines and also the viewpoint tower shape in a corner of the building. 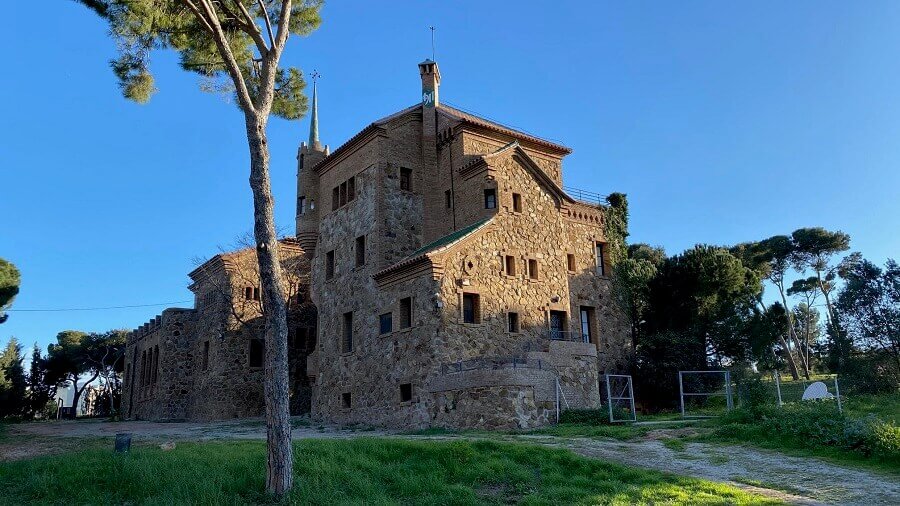 architecturally beautiful, one of the quaint houses of the Colony Güell, previously lived the company administrator. Vale a pena visit, stroll through its streets and see all the magic in them. 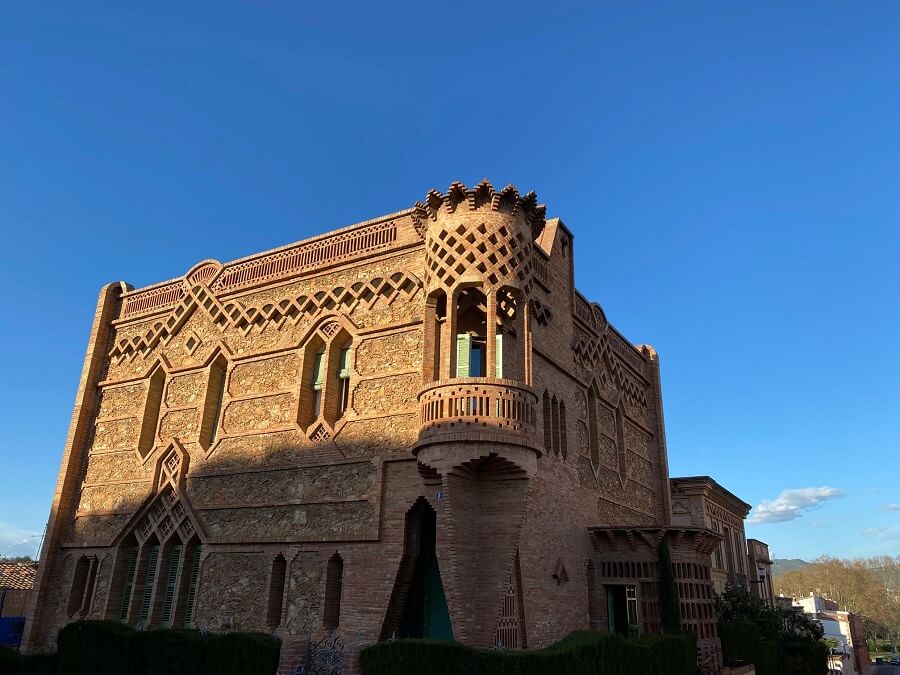 Ca l'Ordal is the first building we find in the residential part of the Cologne Güell, although the look is not a home, the architect wanted to meet the unique way the most significant features of rural houses. 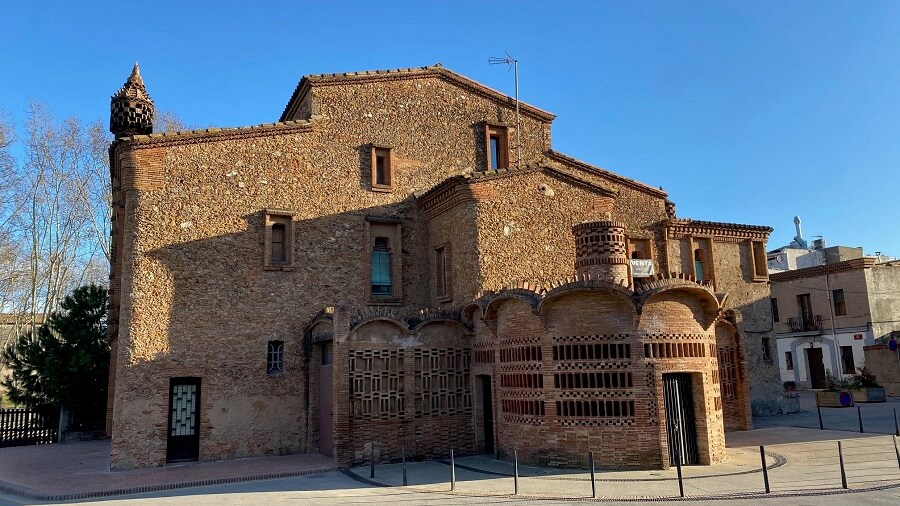 It is an isolated building, formed by three terraced houses, with a basement dedicated to stables, ground floor and attic. The most original house is that each facade of the ground (front and rear) It has a different treatment, and in the form of its plant.

The main attraction of Colonia Guell, a Gaudi Crypt, crypt of a church that Gaudí started to build in Cologne Güell, the church was not completed by Gaudí as a matter of funding, but the crypt was completed by him. 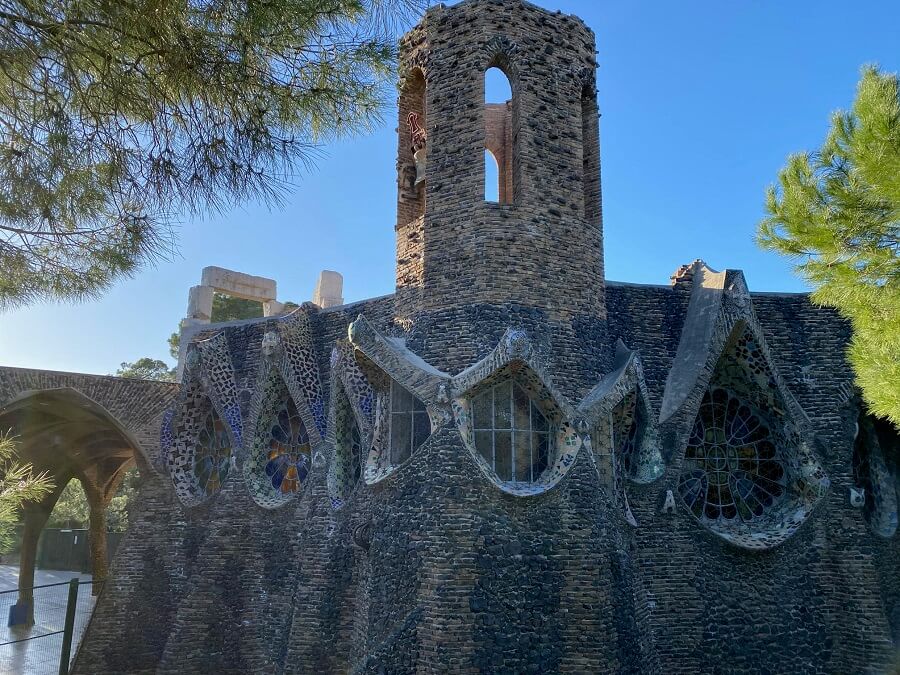 In this job, Gaudí used his more usual architectural technique, the arc of catenary and natural resources as a source of inspiration, giving organic forms to the church that was part of the environment. The materials used were black basalt stone, brick and mortar. crosses, fish, alphas and omegas flood the facade recalling his devotion to the Catholic religion. not inside, a number of vertebrate arches flood the ceiling.

Somehow, this crypt reminds us a lot of the Holy Family. And Gaudí remarked: "Without the test wide range of helical and deformed shapes and paraboloids in columns on the walls and domes made in Cologne Güell, I would not dare use them in the temple of the Holy Family "So, this unfinished project must have been the main inspiration for the Holy Family, Also unfinished work of Gaudí. 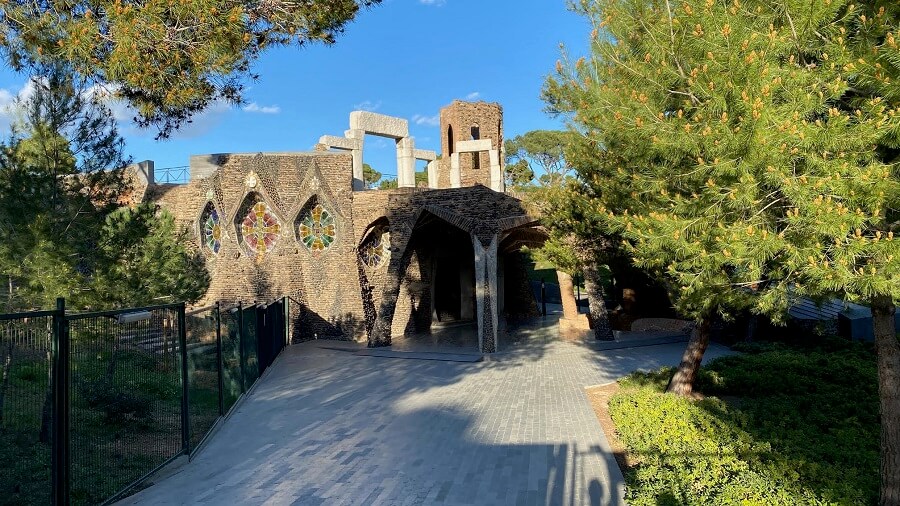 This is the only attraction that has a visit is that it can be purchased online at the site TicketBar.

It is a rectory built in 1914 by Francesc Berenguer and Maestros architect who worked for Gaudí. 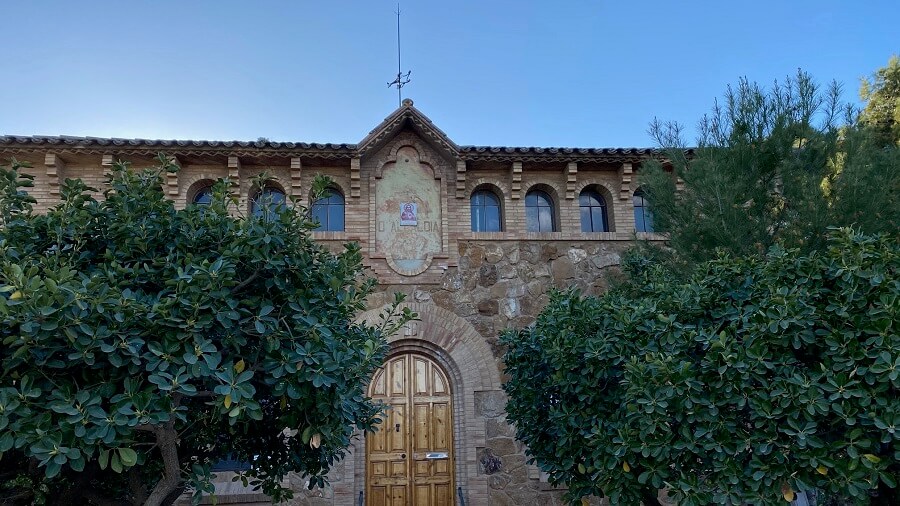 Just as the water tower there are several other very interesting history and culture in the Colony Guell, walk across the colony so you will have an idea of ​​the Güell architecture and go back in time, in colonial.

If you liked the Colonia Guell and want to visit with a tour, It has a very good visiting the Colony and Guell Montserrat, another wonderful attraction near Barcelona, the ticket can be purchased here.