What do Geneva? City that enchanted us

May 29, 2018 0 By Christian Gutierrez and Priscilla Gutierrez

Geneva is one of the largest and most famous Swiss cities, It is located in the west, divided by the Rhone River and is on the banks of Lake Geneva, Here we will discuss about what to do in Geneva.

Geneva written in French Genève, this part of Switzerland has as the official language, The french, Switzerland has four official languages, and every part of the country speaks one language by the proximity of the country, for example Zurich that is closer to the Germany Speak German, and Geneva that is almost on the border with France speak French, from the most famous lake of the city you can see who is in the MontBlanc France.

As I said above, the city is divided by the river Rhone, the largest hotels are on the left side of the river, where we booked our hotel the Residence Studio Geneva Center, which is well located, near the main tourist attractions in Geneva, they are on both sides, the charm of the city is walk the edge of Lake Geneva and the jet of water that gets into the lake. 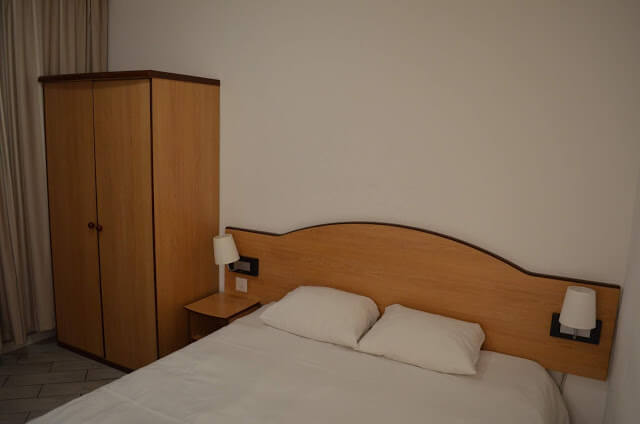 Geneva is also very famous for political and diplomatic side, along with New York are the most important centers of diplomacy and international cooperation due to the presence of numerous international organizations, as the United Nations, the Red Cross and UNESCO. 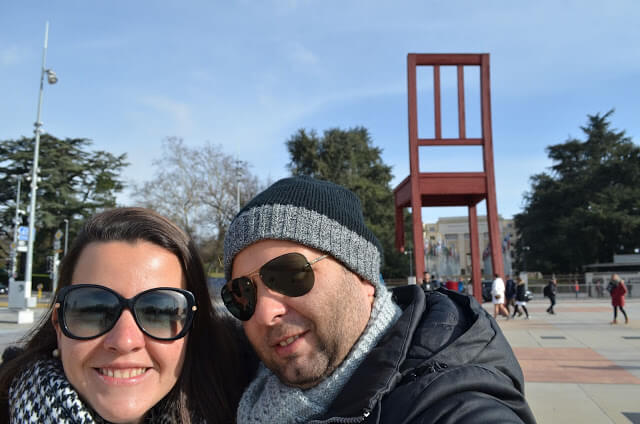 We were there on a trip we made at Easter this year, we made a screenplay by Switzerland, We know the city Zurich, Lucerne, Lausanne, Montreux and the last stop was Geneva, all that we train, we think it is the best option to travel around the country, to write a text on how to buy train ticket to Switzerland, and to facilitate the logistics arrive by plane for Zurich and we left for Geneva. 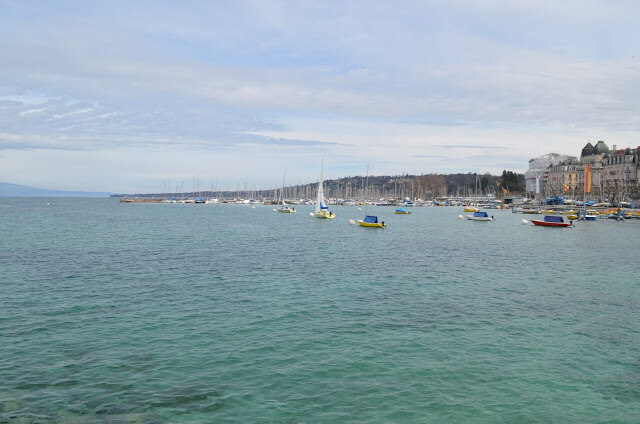 We stayed one night and one day in Geneva, it was run, but he has to know almost everything, not only had time to make a further boat ride.

Things to Do in Geneva and what are the main tourist attractions?

We got there at night after spending the day in Lausanne and Montreux, We got off at the main train station in Geneva that has the same name of the city, there at the station has it all and we would pass the Coop supermarket and buy our dinner, since the hotel had a small kitchen, Switzerland is an expensive country, so we thought it good some days eat at cheaper places, and this supermarket is well known for there, O Hotel Residence Studio Geneva Center, is a 10 minutes walk from the station, and also a 5 minute walk from Lake, Its location is good and the hotel is very good and cheap, by Swiss standards, the only thing is that this region has prostitution and selling drugs, but quiet and saw no danger, in this region are almost all city hotels, e.g. hotel Novotel It is in the same block.

Soon after we left our things at the hotel and dinner went for a night on the town, we take our machine to take pictures which is great and do not pass by any danger, so we think the quiet neighborhood and the people also spoke to us that it was safe.

In the evening We strolled along the edge of Lake Geneva and that day had a beautiful full moon that made the ride even more amazing and beautiful, the lake has several parks, squares and a boardwalk, by the time we got there it was after 10 PM and the most famous Water Jet City was already off, on our tour to exchange an idea with one of those travelers who travel around the world walk sleeping in the street and asking for money, the conversation was really nice and he told many interesting stories, he stopped to talk to us as well as he were drinking beer on the street, as we had traveled, agreed early and have paced by two other cities, we were tired, then we returned to the hotel to rest for the next day we had to get up early again for the city. 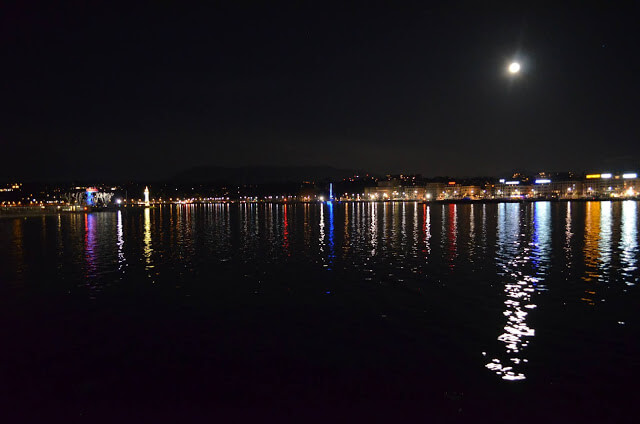 The next day we went straight to the farthest points of the city center, to give to walk, but as public transport in Switzerland is free for guests of hotels, we take our ticket we got in the hotel and went to the cable car Broken Chair in Geneva (Broken Chair), a symbol / sculpture in front of the United Nations Palace, the chair has only three legs because, It represents people who have suffered and suffer from landmines worldwide, wooden sculpture over 5 tons was established in 1997 by the NGO Handicap International and would be only for a few months, but he became a symbol for peace in the world and today is there. 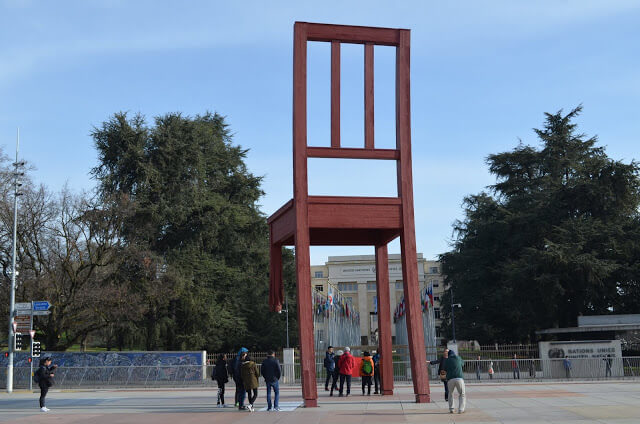 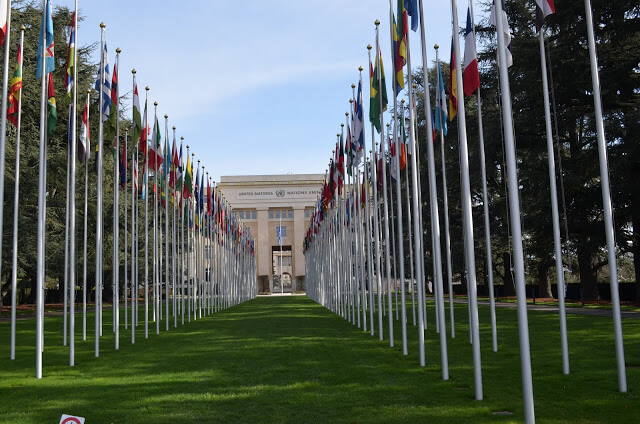 The United Nations Palace, you can visit and has the room where the meetings take place with representatives from around the world, the visit is guided and takes about 2 hours to do the whole tour, a time that we did not have, only then we strolled through the park next to the palace. 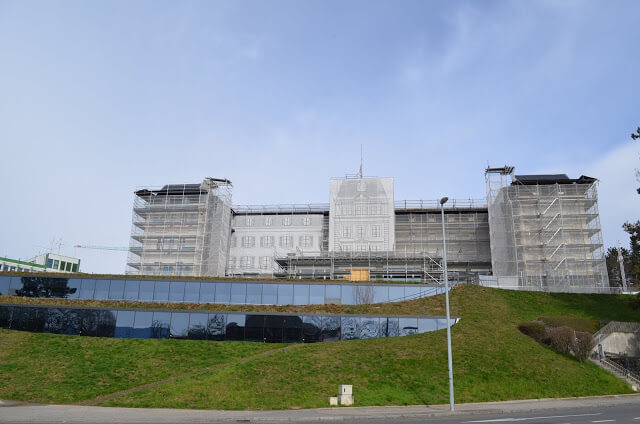 On this side of the city, only have these three attractions, we take again the tram ticket came back to the city center and went straight to the the Rhone and the island of l'Île It is a very beautiful area of ​​town. 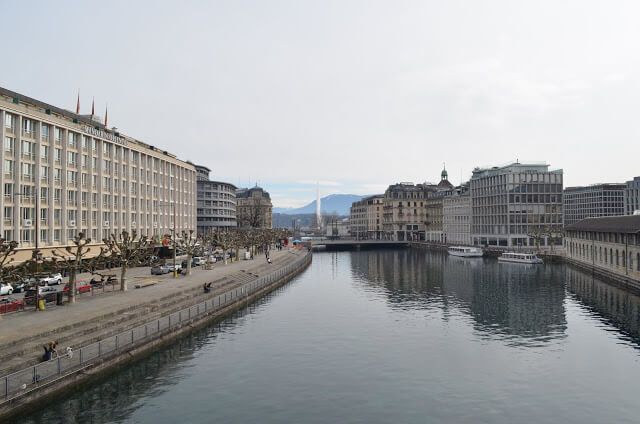 We passed the Grand Theater de Geneve (Grand Théâtre de Genève), beautiful but nothing too, we went to this part of town to meet elsewhere. 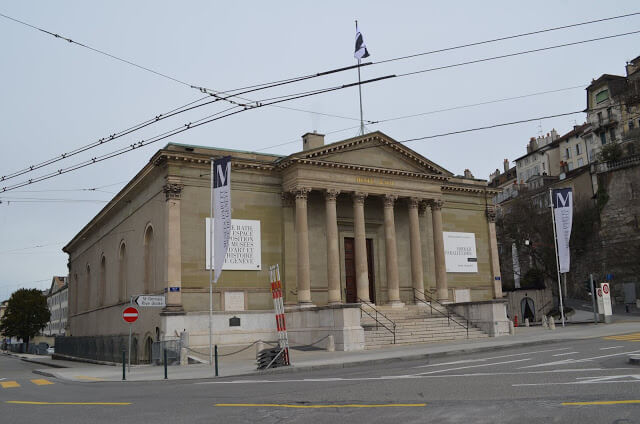 O Bastions Park (Promenade des Bastions) It is a park in front of the theater, where the University of Geneva one of the oldest in Switzerland and the sculpture Two Reformers Wall (Reformation Wall), the wall is the four pioneers of the Reformation: William Farel, John Calvin, Theodore Beza, who was rector of the Geneva Academy and successor of Calvin and John Knox, who was the founder of the cult in the Presbyterian Scotland. 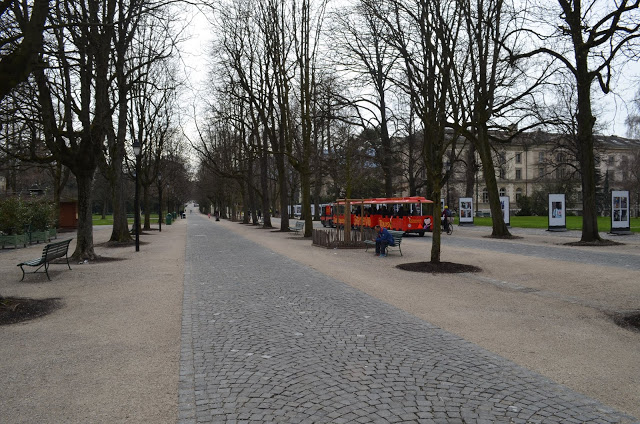 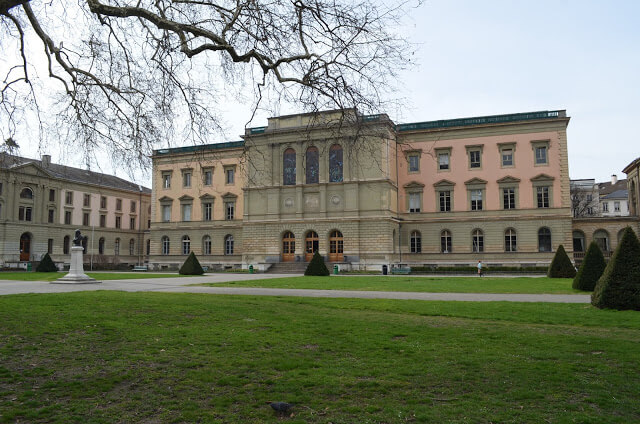 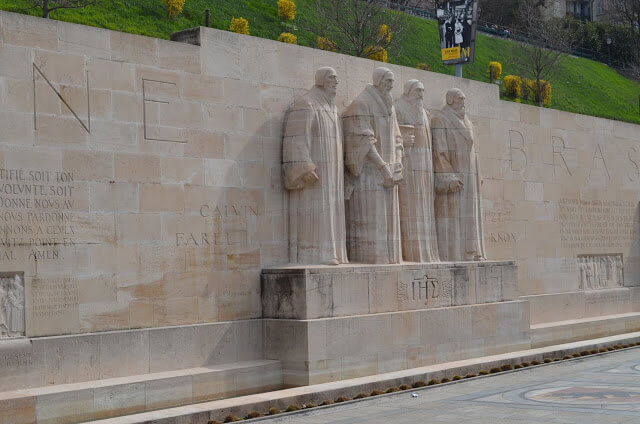 After strolling through the park, we went to the old center of Geneva, where the city began, there visited the Antigo arsenal (ancien arsenal). 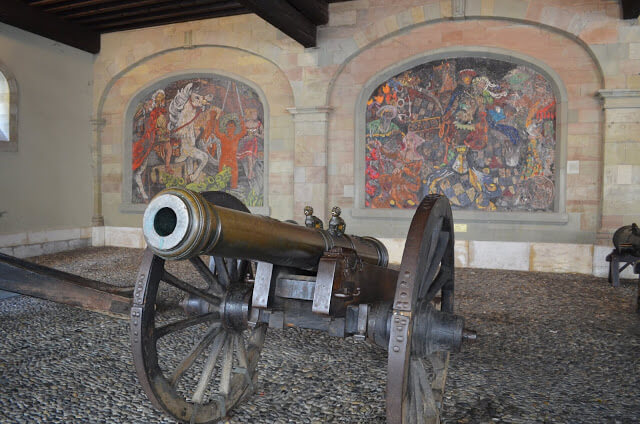 As in other Swiss cities, Geneva has several Drinking Water Source, and beautiful, like this we know. 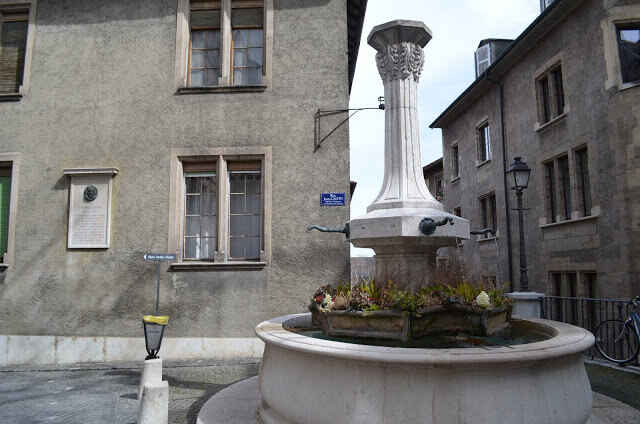 A Cathedral of St. Peter in Geneva It is also in the old city center, built in the sixteenth century is the main Protestant church in the city, the cathedral has a tower with a panoramic view of beautiful city 360, the church building style is Romanesque transition to the Swiss Gothic, it has undergone a major change occurred when inside the Reformation. 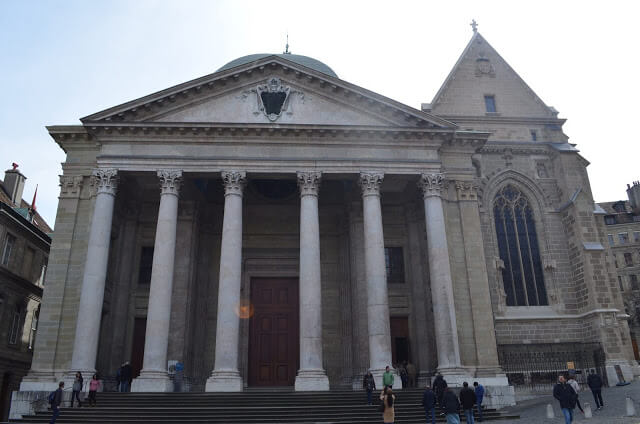 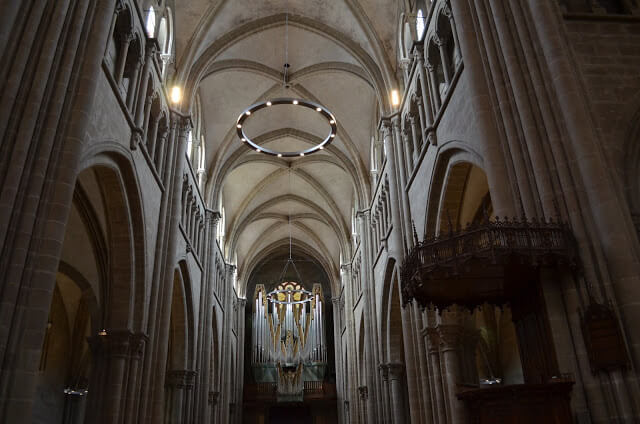 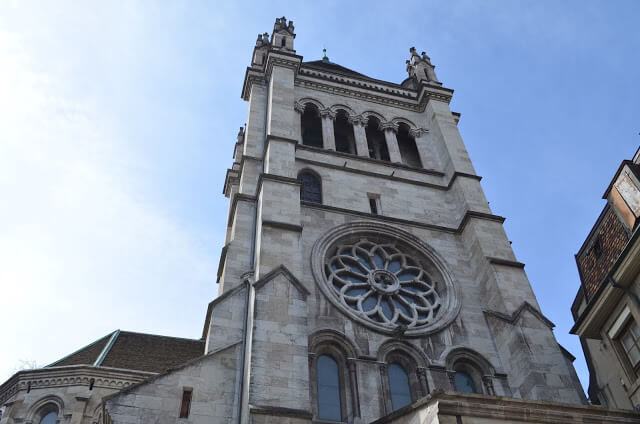 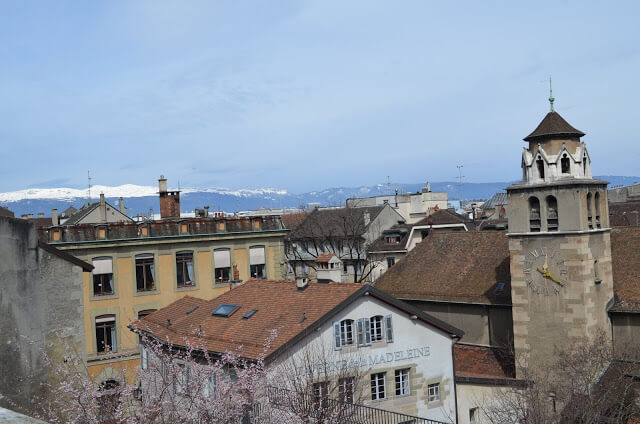 One thing that can not miss on a trip to Switzerland is to eat the delicious Swiss chocolates and of course we did not fail to enjoy and eat these delicacies, We took a stop at the store Confiserie Arn and eat some delicious chocolates.

Outside the city we pass by Art and History Museum in Geneva and in front of him the Observatory Park, with a beautiful view of the Geneva Jet. 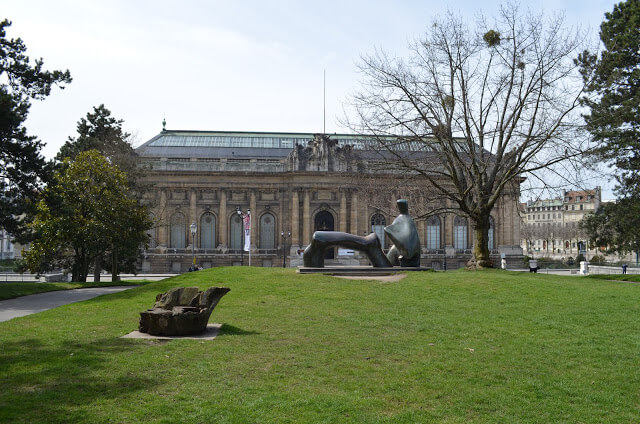 For once we stop to eat at McDonald's, as we talked about, Switzerland is a very expensive country, one of the most expensive to travel we once were, stay and especially to eat, to the Big Mac there is expensive, I turn to 12 euros, what we pay in Spain 6 euros, we there so expensive, or maybe a little less than Iceland Or the Norway.

O Lake Geneva Water Jet (Water Jet) It is the postcard of the city, It is the highest jet in the world, you can see the jet of many parts of the city. 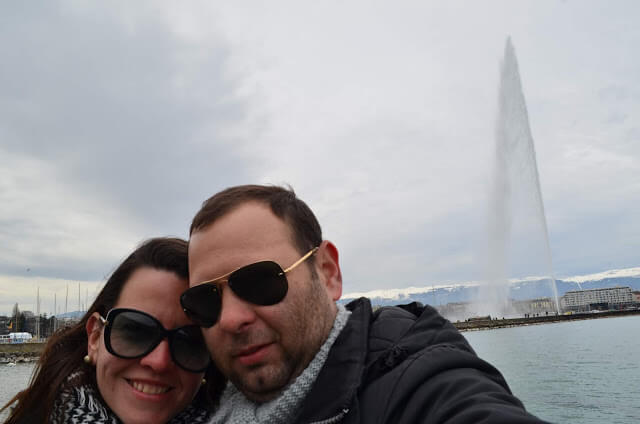 Since we were on the lake, We took advantage and strolled in a boat crossing from one side to the other of the city, this boat is a public transportation is also included in the public transport ticket that won at the hotel and are for all guests. 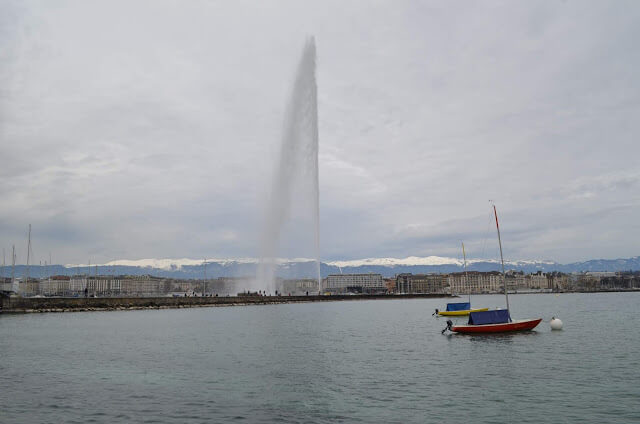 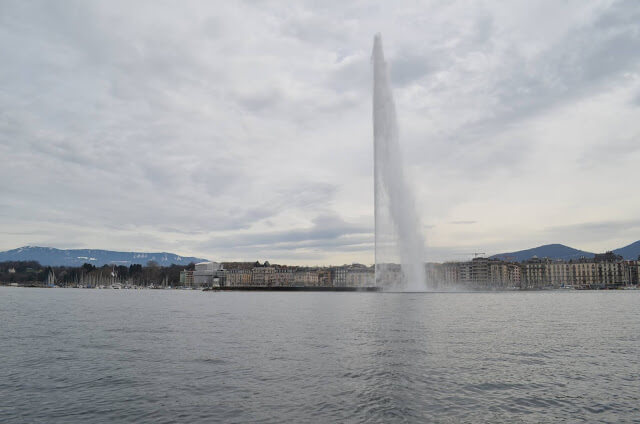 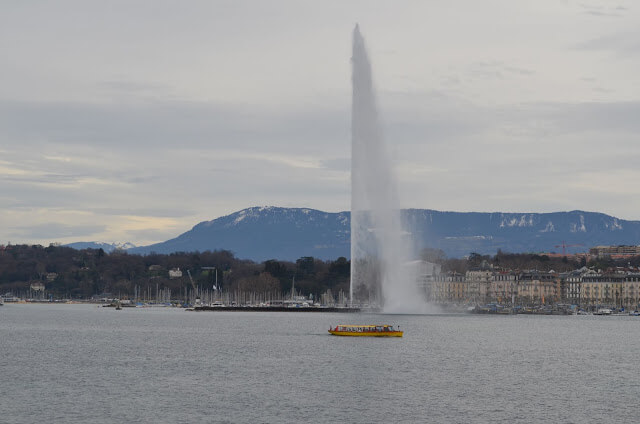 Another tourist attraction in Geneva it's the English Garden and Flower Clock (The flower clock), a clock that has the hands on top of a beautiful and very well-kept garden of flowers. 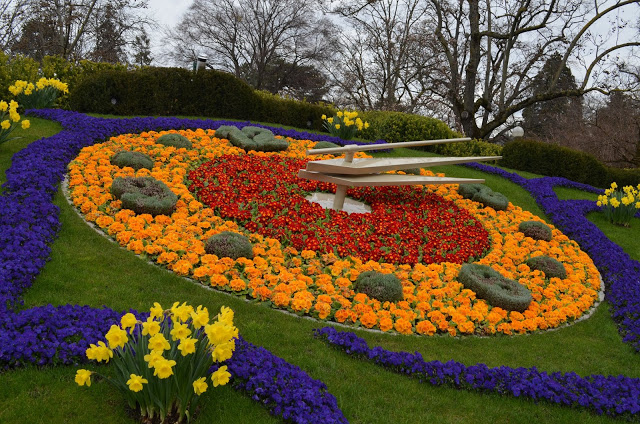 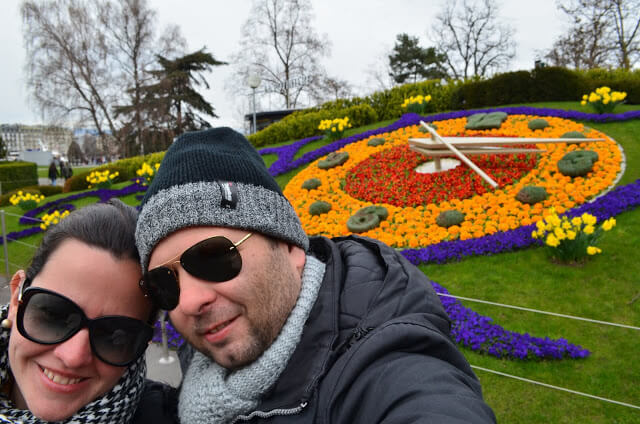 Getting back to the hotel we were walking by Promenade du Lac passed the Monumento a Brunswick, and we arrived at the last stop before going to the hotel pick up your bags and go to the free airport train also, the last stop was to know and get some rest in “Beach” the Lake Geneva called Baths des Pâquis, but it was in the early spring and not rolled a beach, but there during the summer “boils” and auction, They say it's very cool and you can swim quietly and spend the whole day there. 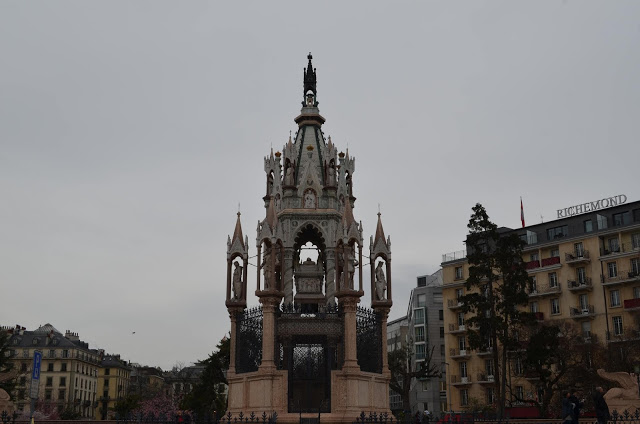 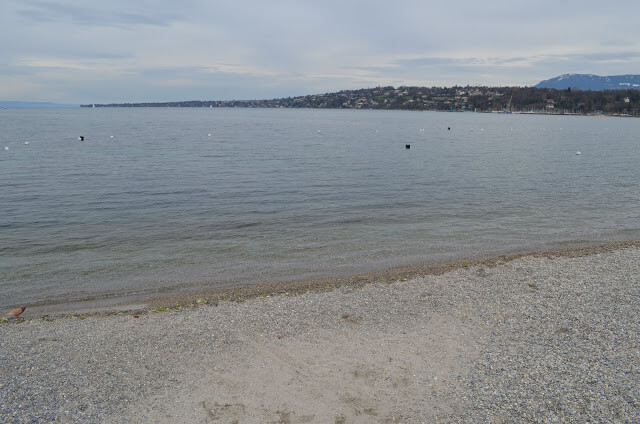 These are our tips dwhat to do in Geneva, I hope it helps in scheduling your trip through this beautiful place.

CategoryEurope What to do in Switzerland?
Tagsdestination RBBV Europe Geneva Geneve Lake Geneva lake Geneva United Nations Things to Do in Geneva Switzerland

Things to Do in Lucerne? The charming city overlooking the Lake of the Four Cantons

Things you should not miss a trip to the US