Santorini, the most famous island of Greece, postcard Country, with its white houses facing the sea, a volcanic island with amazing places, that only an island so has.

The Santorini Island was our last stop of the cruise we did the Greek islands, we start from Athens, we stopped in Mykonos, Chalk, Patmos Island e Wheels.

To be formed by the eruption of a volcano thousands of years ago, the island of Santorini has a format that resembles a half moon, in front of the other islands, in the middle of everything is the caldera of the volcano, has several gazebos scattered around the island to see the boiler. 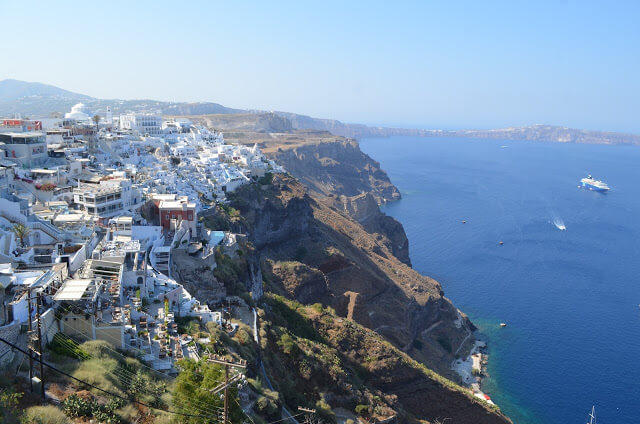 The ship was anchored in the Surroundings Ocean, it has not harbor from them, there all passengers leave the boats cruise who seek and lead to the old port of Santorini (Old Port) and from there you will have to climb a mountain and have 3 ways to do this: the one that indicated is to take a cable car costs 6 EUR per person, by distance, it takes a 5 minutes to go up or down, but you can not buy round trip along, you can climb on foot, are stairs, but it is a bit heavy rise, it is pretty steep and should take around 30 minutes or the third option are the donkeys, but we do not recommend this, as well as haze of the bugs can be a little dangerous, they can slip and fall along with you. 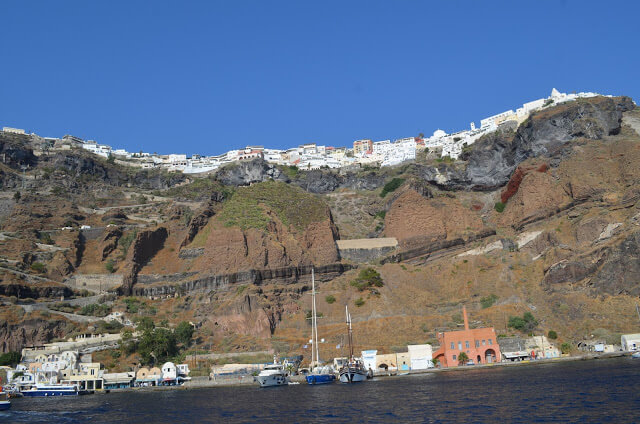 Like the other islands there were also only a few hours, more or less 8 hours.

Things to Do in Santorini? What are the main attractions of Santorini Island?

The ship anchored at the scheduled time, but different from other ports, there was a bit confusing landing, for the ship prioritized people who had done tours with them, and left us wanting more or less 45 minutes into the ship out. 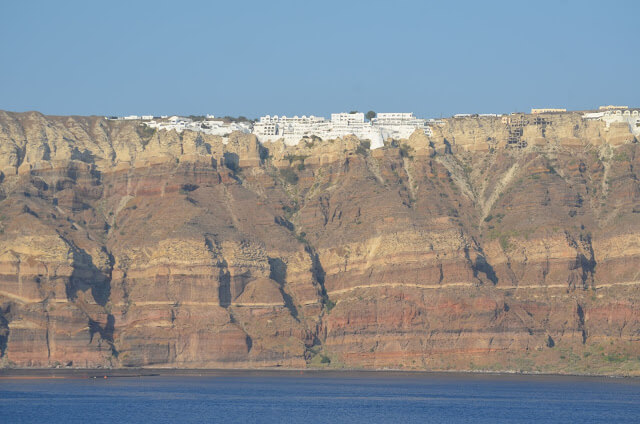 With this we almost lost the ATV we had previously rented and was waiting for us at the port, we got there and it was gone, I'm glad you were with the internet chip Greece we had bought in Mykonos, we called the rental company and luckily the person who would leave the ATV with us was nearby, and he could quickly return, so we do not lose more time. So here's the first tip, if you are not doing tours with the ship and you know the island like we did ATV, check with each rental 30 a 45 minutes after the landing time

Our first day's destination was to visit the city of Oia, there and the city's famous white houses facing the sea, as we speak is the postcard of the island and Greece, It was very quick to get there by ATV and then left at the beginning of the city, because the city was a lot of traffic because of bus tours. 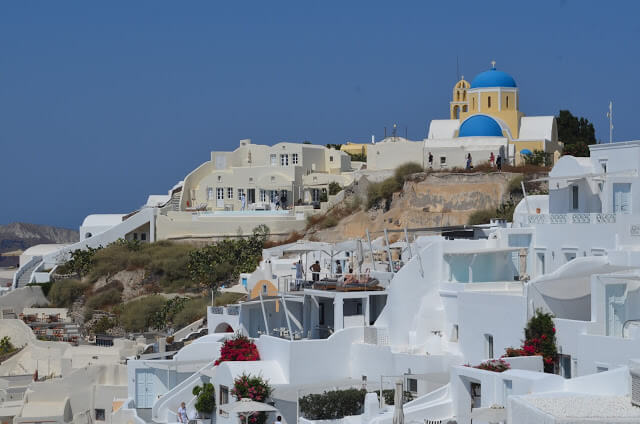 We were a few hours to get to know the city and its sights, and we visited the Oia Castle, the sunset viewpoint. 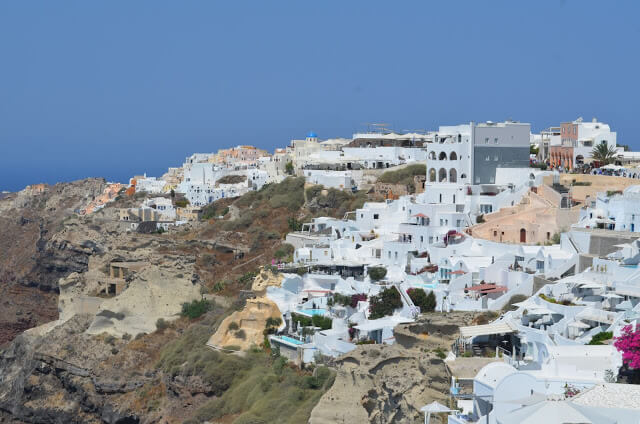 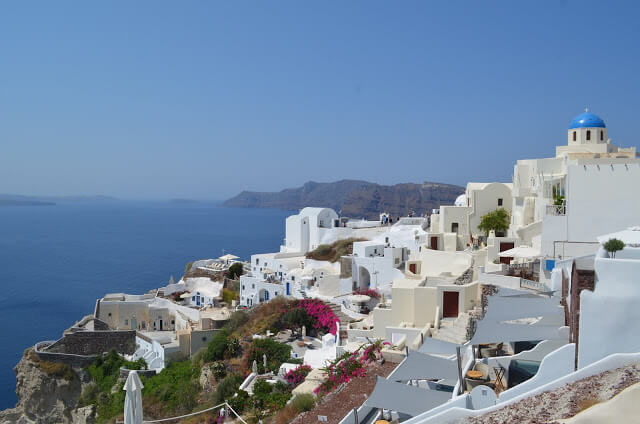 We walked through all the streets, it has to be done calmly as the city is very beautiful, with various angles to see the diverse landscapes and take thousands of photos. 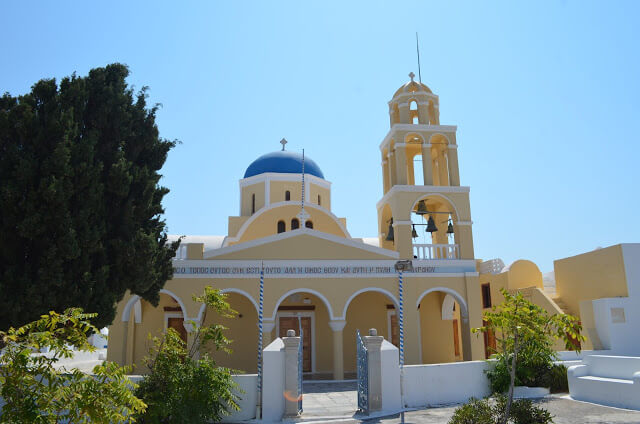 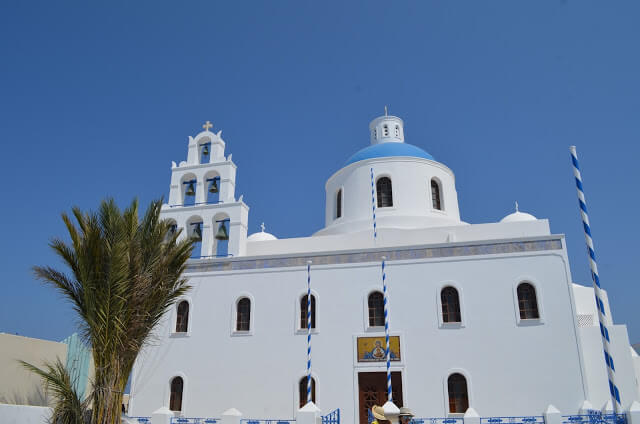 We also know some Greek Orthodox churches, What are those white buildings with blue domes. 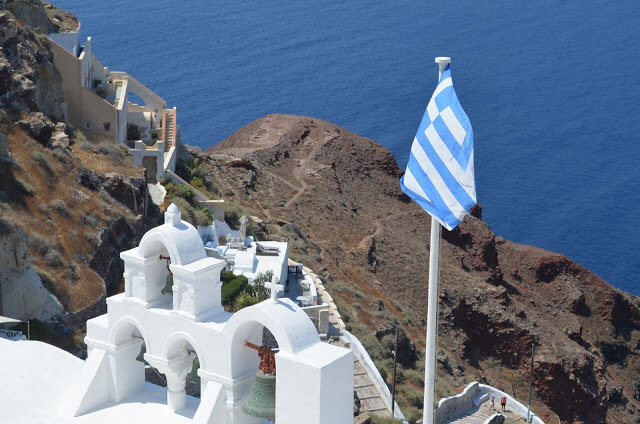 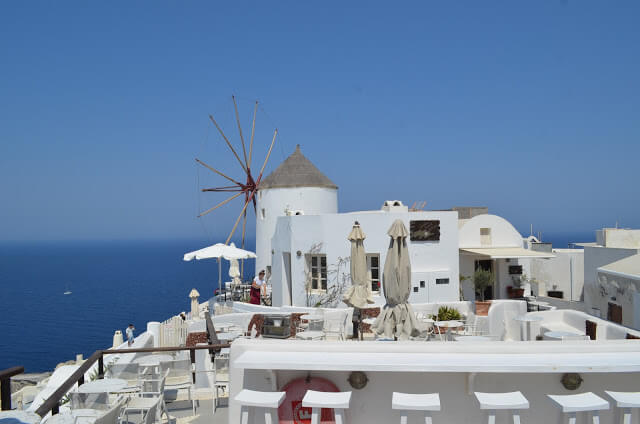 The sunset there must be beautiful from what we saw in photos, but as we were on the ship had no time to see this spectacle of nature that angle. 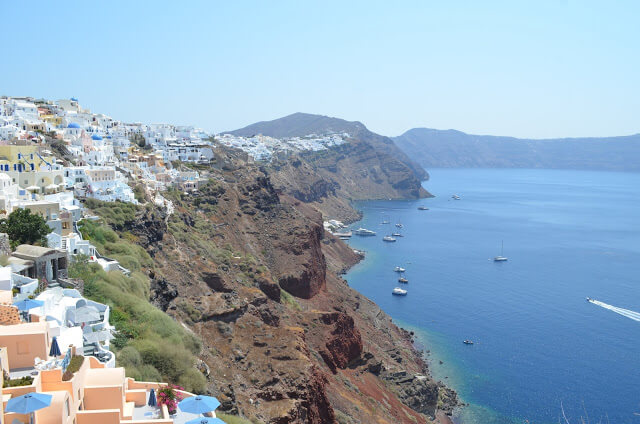 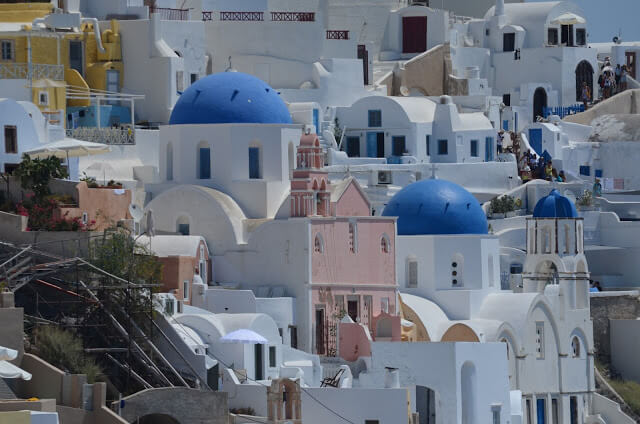 We were delighted with the town of Oia, it really is very beautiful, equal to or more beautiful than we have seen in thousands of photos. 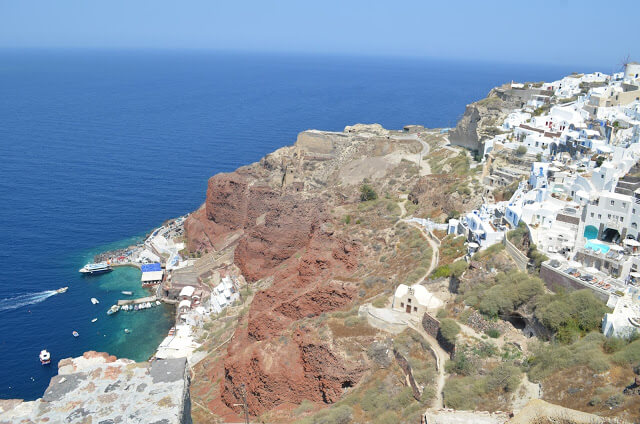 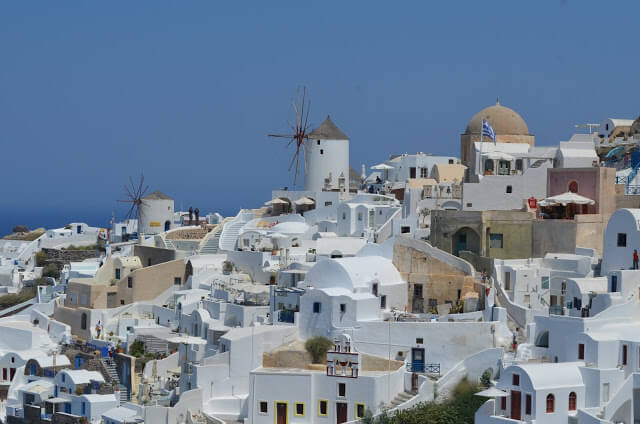 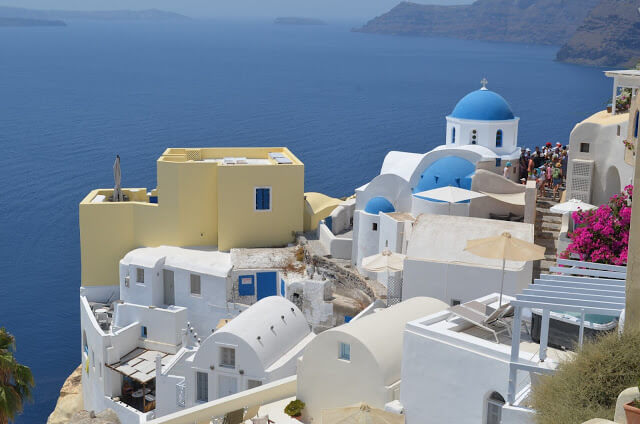 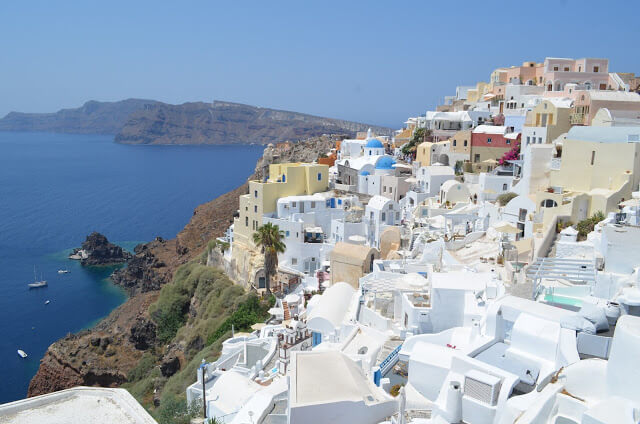 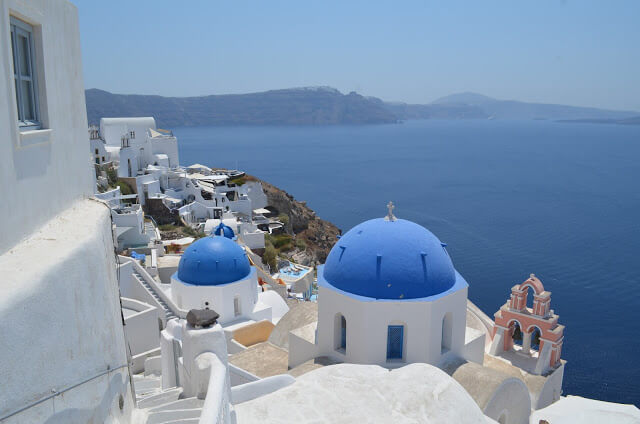 In an upcoming trip there, let us stay in those hotels with pool facing the sea, each hotel more beautiful than the other, many of them the pool is on the balcony of your room, how beautiful and luxurious.

Continuing our tour we went to Perissa Beach (Perissa Black Beach), Santorini has those beautiful beaches with white sands and crystal clear waters, blue and green tones as in other islands of Greece, but the beaches there has its charm, for example this beach is black sand, so even black, because the island is volcanic, We did not know that there was also beach so, only we knew of the existence of beaches like this in Iceland. We love to know beaches, an important tip, during the Greek summer do not walk at all on black sand without shoes, because it is soooo hot, even slipper is almost killing hot. 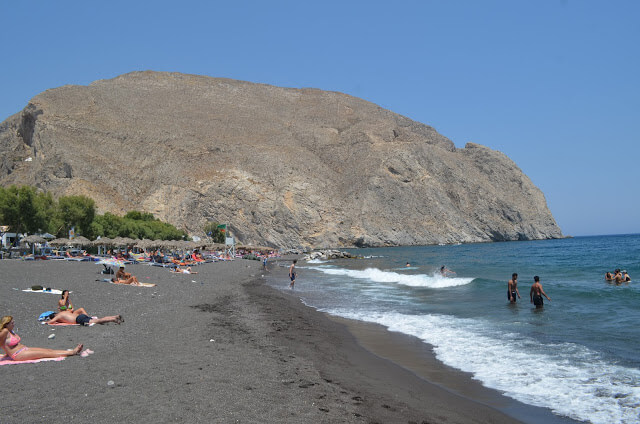 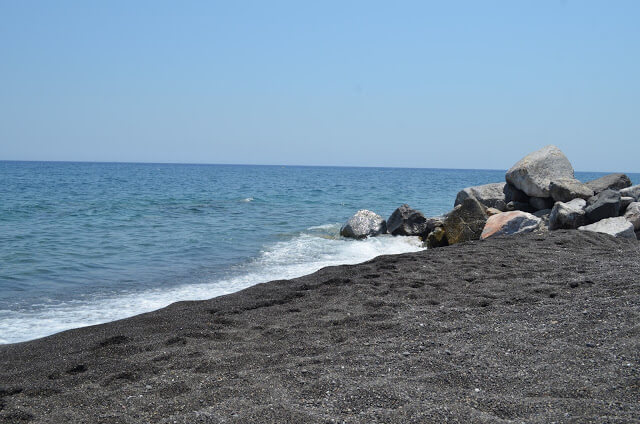 After we know this beach, We went to meet another beach in the same style, we were in Red Beach, as the name suggests it is a red beach, where the sand is formed by red and cliffs. 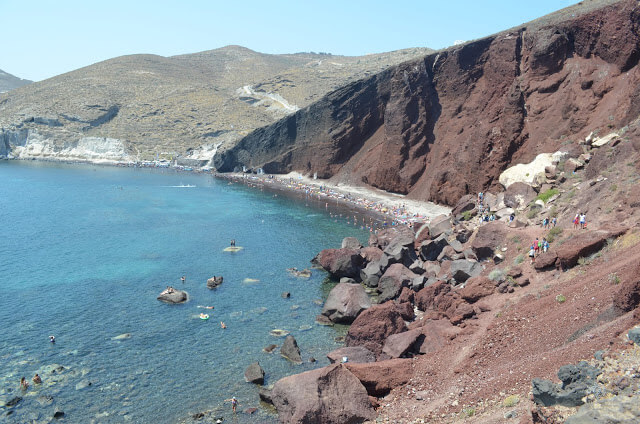 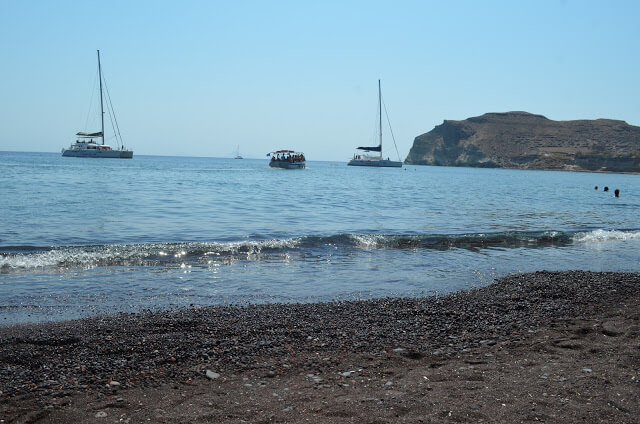 Dali leave boat trips to a beach on another island called White Beach, because of the mountains of the island are white, as we had little time could not go.

Halfway between this beach and Perissa Beach we stopped to see Volcano boiler, in a gazebo in the middle of the road, impressive size of the boiler, imagine how was the explosion of this volcano. 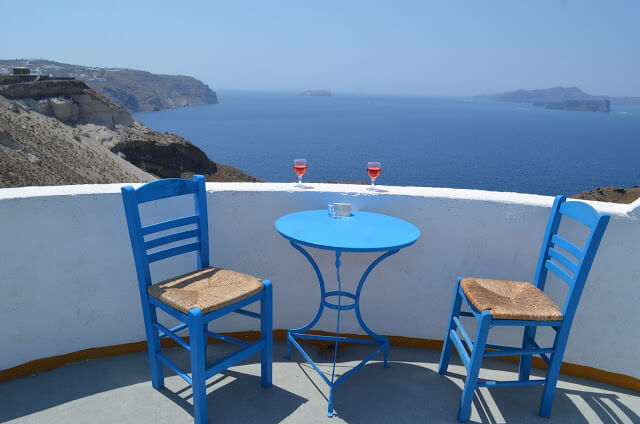 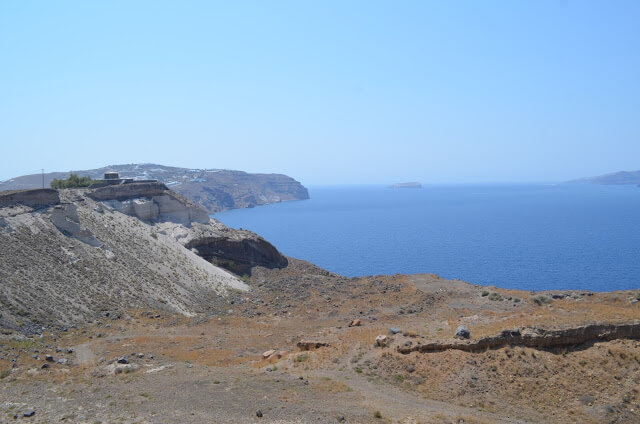 It seems to have a boat ride that goes on a part of the sea nearby island, where the sea water is very hot because of the volcano.

Our last stop was to meet another important city of the island, a capital fair, there as well as the city is all Oia with white houses, Facing the sea, with panoramic views similar to Oia. 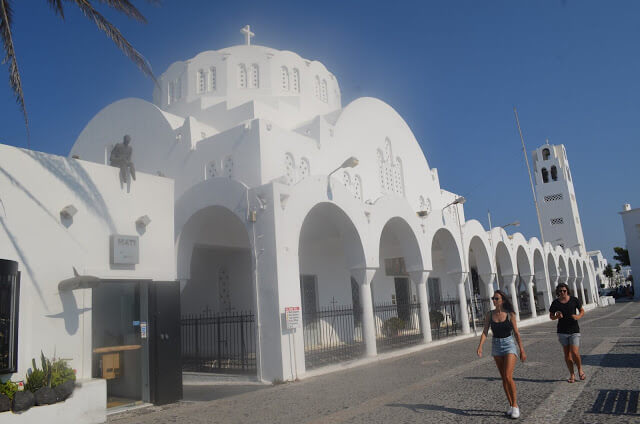 We walked by Fira, I know every little street and its beauties.

As mentioned above FIRA, out the cable car to the old port, where we took the boats to return to cruise. 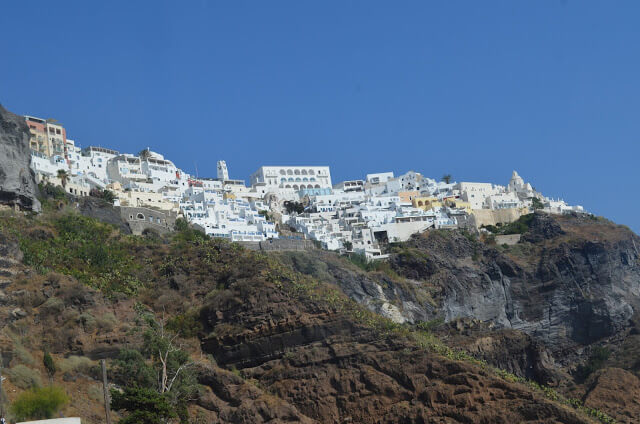 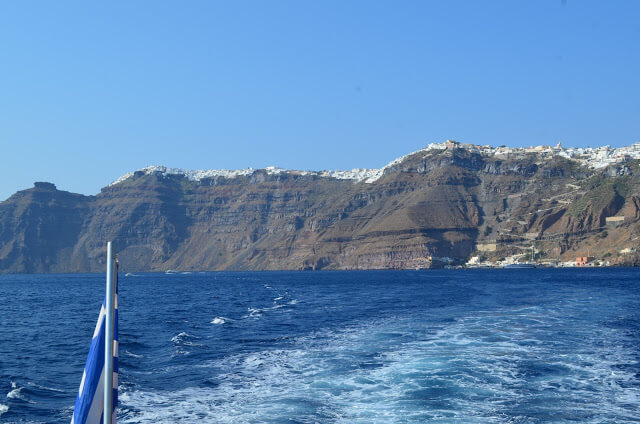 We were homesick, because it was our last night on the cruise and the next morning already go back home. But before we saw the last sunset of the trip in the Aegean. 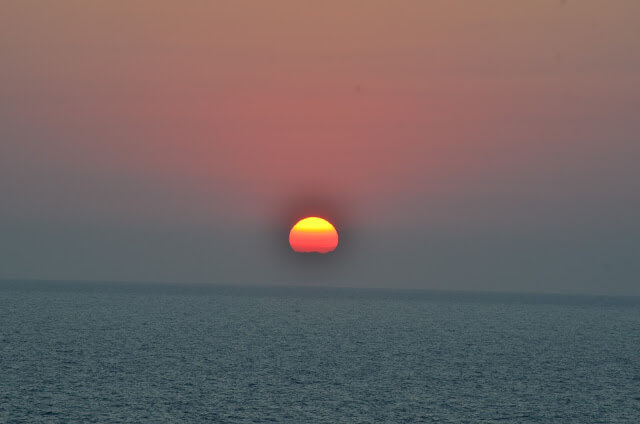 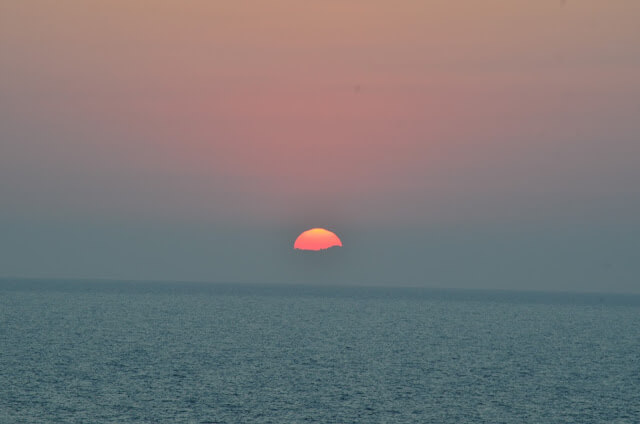