Nice is one of the major cities of Côte D'Azur (a famous French Riviera), to be a pretty big city compared to other cities of the blue coast and also have the main airport in the region, many people like us, They make nice a city base for exploring many other cities that are close.

We went to Nice on a journey that would almost the entire Côte D'Azur in 9 day trip, we base the cities Marseille, Saint Tropez e Nice, these cities, we went to Cassis, National Park Calanques, Aix en Provence, Cannes, Antibes, Monaco, Éze, Villefranche, Saint-Jean-Cap-Ferrat e Grimaud.

In Nice we 3 nights, the city is a little more expensive than other cities in the region, so we decided to stay in an apartment rented by AirBnB, it was cheaper, We got a great location, 3 blocks from the Promenade des Anglais Avenue on the edge most famous sea town, the good from AirBnB can we rent an apartment with kitchen, so we reduced some spending on food, we were by car and there had also included parking. 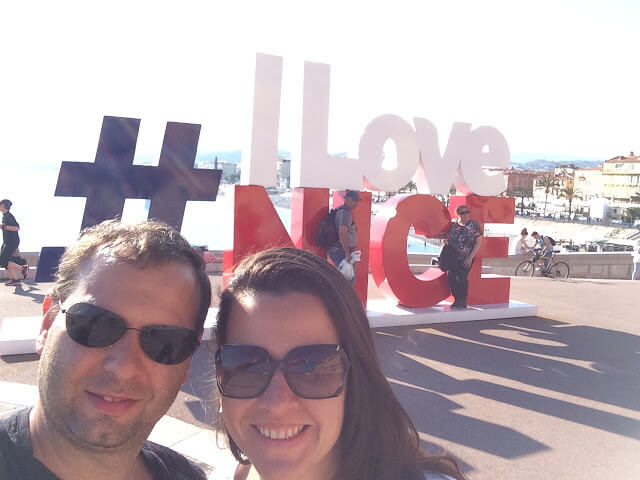 We got there come from Marseille, from there to Nice is a very peaceful trip, We headed back roads because the highways have tolls, and generally these roads are much more beautiful it passes through rural areas and other beaches, which makes the trip to be very peaceful and beautiful landscapes.

After meeting with the owner of the apartment AirBnB, for the first time left us waiting almost 1 hour to arrive and hand over the keys, but these things happen and try not to annoy us, We went straight walk on the Promenade des Anglais. 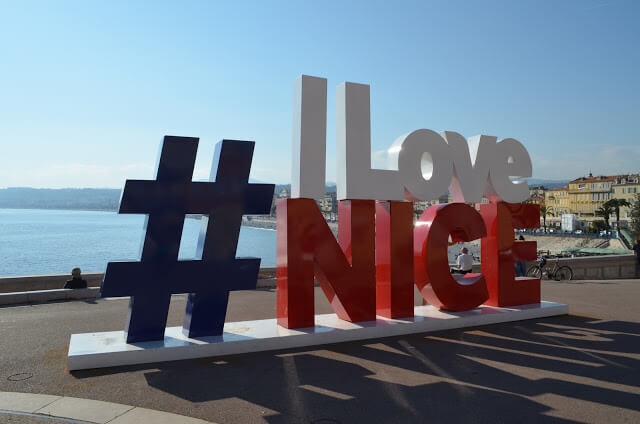 On the first day, what to do in Nice and what are its tourist attractions

A Promenade des Anglais It is an avenue by the sea, where are many of the major tourist attractions in Nice, starting with the nice beach, different beaches we are used to in Brazil and Spain Nice beach is not fine white sand, there is the beach of large stones, what bothers a bit to walk and lie down. 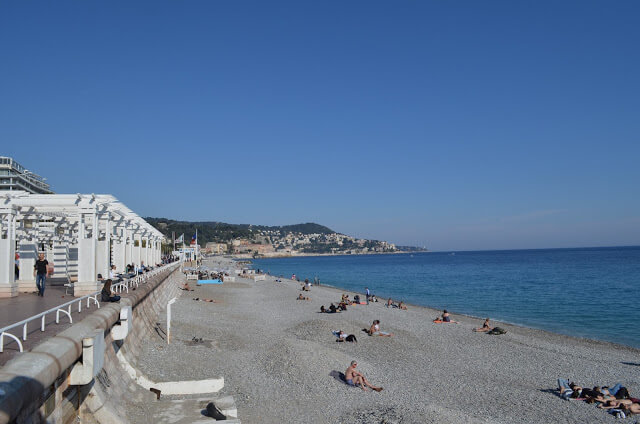 There beaches are divided between public beaches do not pay to go and stay and private beaches where restaurants and bars are installed, that location in front of the bar you pay to sit in chairs or loungers and have a drink and food service, if that is your choice, prepare the pocket, because in this region everything is pretty expensive. 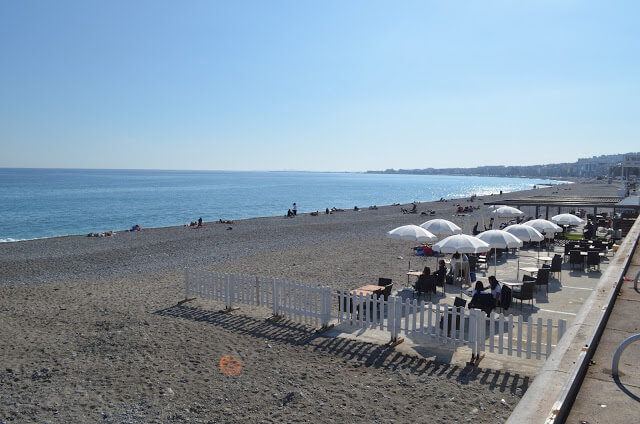 Continuing the boardwalk we passed the famous hotel Negresco, one of the most chic and luxurious hotels in the city is like a Copacabana Palace, It must be wonderful staying at hotel Negresco further with the amazing views that we have of the Mediterranean Sea. 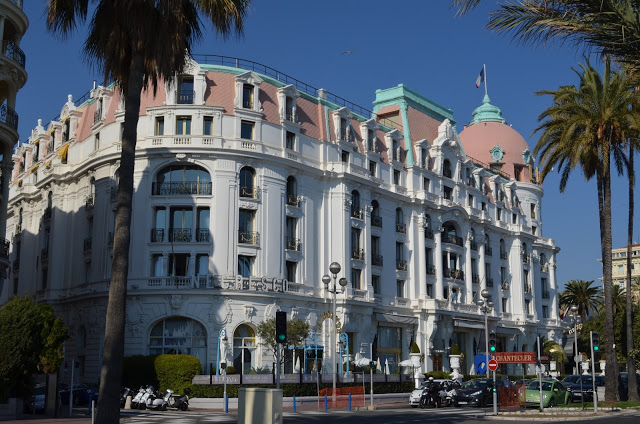 In the sea, It has many sculptures, a beautiful park and many restaurants and bars, at the end of the boardwalk has the Hill Château, which is probably the main attraction of the city, to climb the hill you can take the stairs or an elevator which is free, but it is not always open, we went up the elevator and down the stairs, because in the late afternoon the lift was already closed.

A Colina do Castle, It is so named because up there had the Castle of Nice, also known as Castle Hill, today only have some ruins of what was the castle and a church. 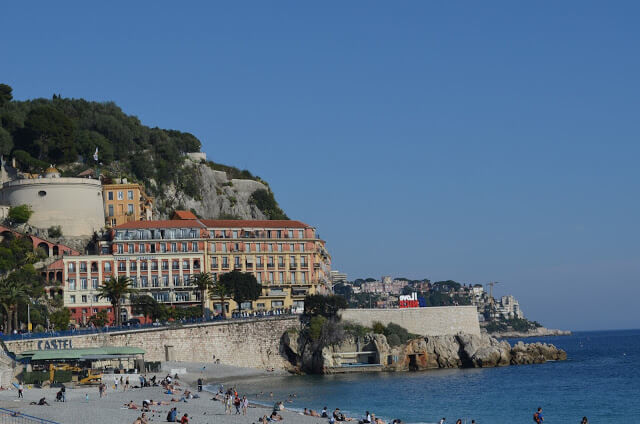 What's up there? Today is a beautiful park, with a fountain that looks like a waterfall, but what is very beautiful indeed are the panoramic city views, there must be an amazing place to watch the sunrise or sunsets, We saw the beginning of the setting sun, We wanted to stay longer, only that it was late and started to beat hunger and thirst rs. 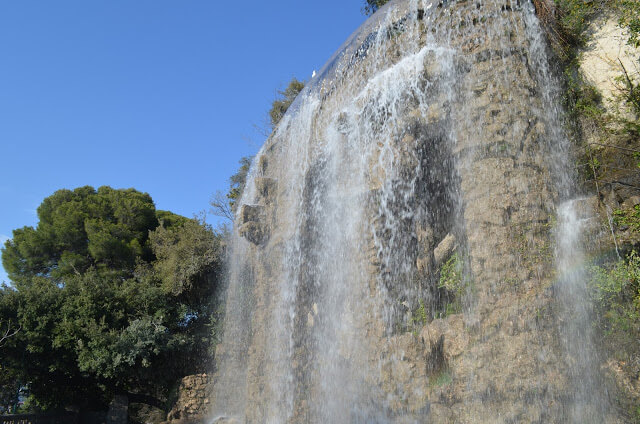 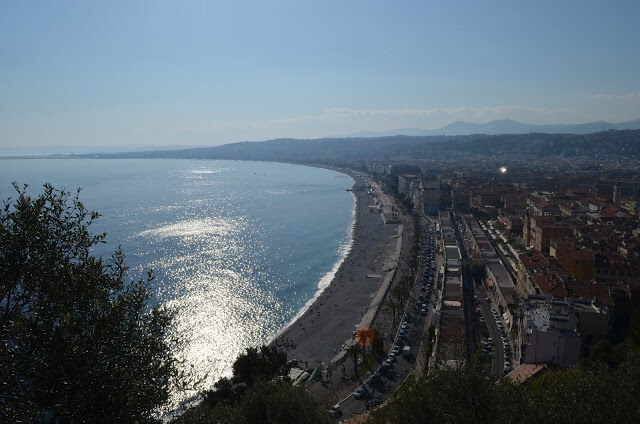 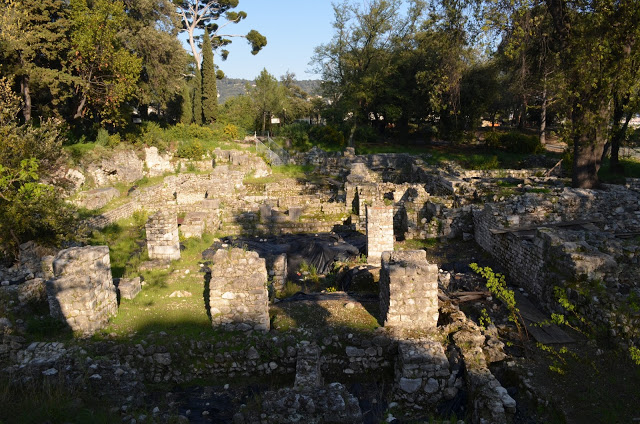 We stopped to eat and drink in a restaurant near the Château Hill, already back on the promenade by the sea, We stopped at the restaurant Meldia, there are several restaurants and bars, choose one and enjoy the late afternoon to eat good food Provençal and be sure to take a rosé wine, this region this kind of wine is very famous and very good, these bars are not as expensive as those in the beach. 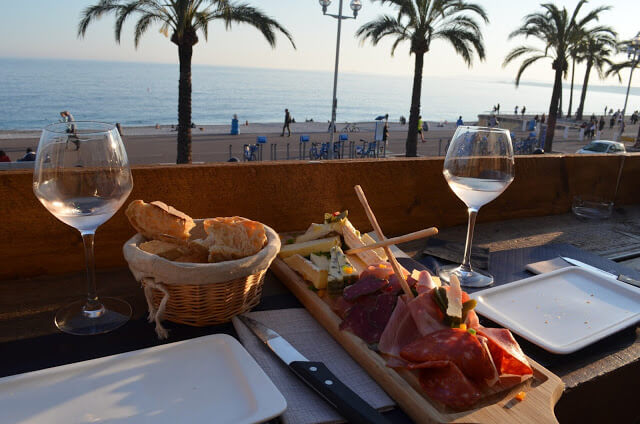 After eating and drinking, We went to the beach and buy some more beer in a grocery, and there we stayed until almost midnight, enjoying the look of the city, even though the early spring was a pleasant temperature. 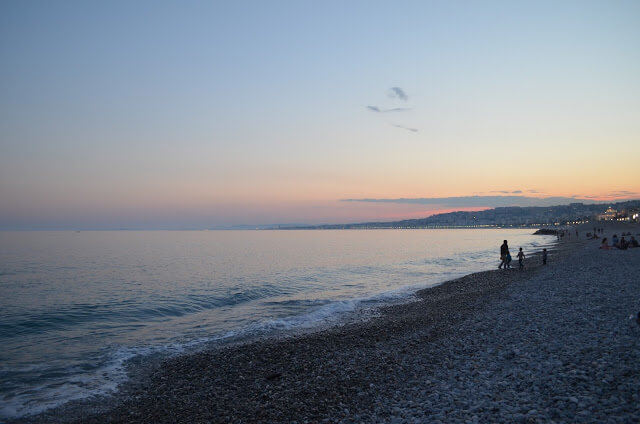 In the second day, we know other cities, we went to Cannes e Antibes (see also posts on these other cities), almost spent the whole day Cannes and on the tail end took a last in Antibes.

Returning to Nice, We went back to the beach in the afternoon very end.

On the third day, we also meet other nearby cities there, and went through Villefranche a small town next to Nice, this city is beautiful, It has a castle in the port, and a beautiful beach to beach marinières, after we got there in Saint-Jean-Cap-Ferrat in this town has a lovely promenade to meet Palace and Garden Villa Ephrussi de Rothschild the palace is Provençal style, very wonderful and also has a garden divided into several beautiful themes, out views that have the sea.

After going through these two cities, the main target of the day was to know the small luxury country Monaco, as the country is very expensive the best option to know there, It is to stay in Nice and spend only the day in Monaco, in one day give to know the city well.

On the way back from Monaco to Nice, We stopped again, and it was in a medieval city on the mountain, the city of Èze, it is all medieval, its streets and houses are made of stone, It has an incredible view of the coast of Côte D'Azur.

We arrived in Nice super late and tired of this long trip, but very worth it, just remembering what we did this drive, so it has to meet all, if by train or bus can be something or other do not give to visit.

In the fourth and final day, We stayed in Nice until the middle of the afternoon to meet the city's other things. 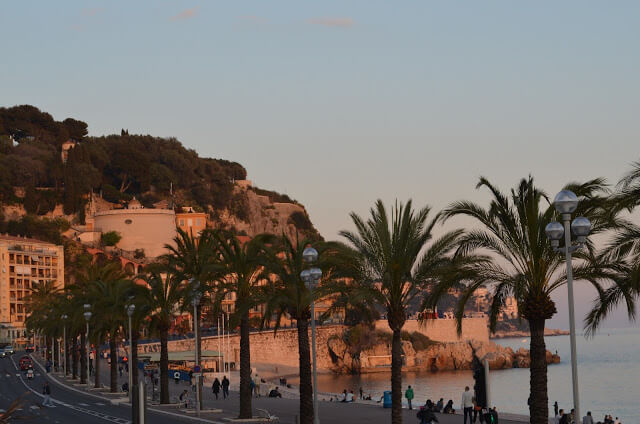 We know the old center Nice Life, which is at the foot of the Château Hill, in this way we passed many interesting places like the Albert 1st Gardens and the Boulevard Jean Jaures avenue, this avenue have many things to know as the Fontaine du Soleil, a Praca Promenade Paillon, it all we got to know on foot. 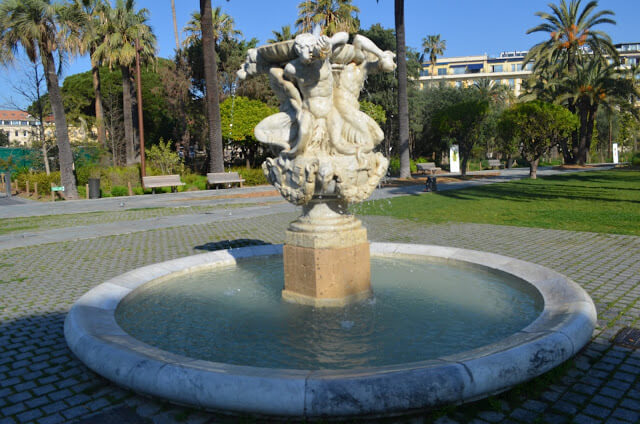 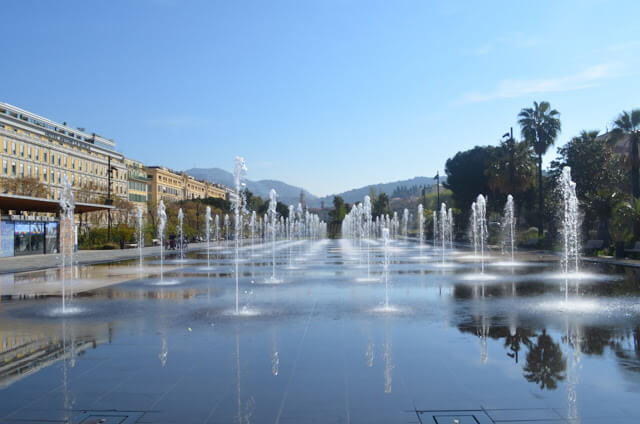 Next there is the Catedral de Nice, is small close to other cathedrals of Europe, but it has its charm, also we passed the Palace of Justice. 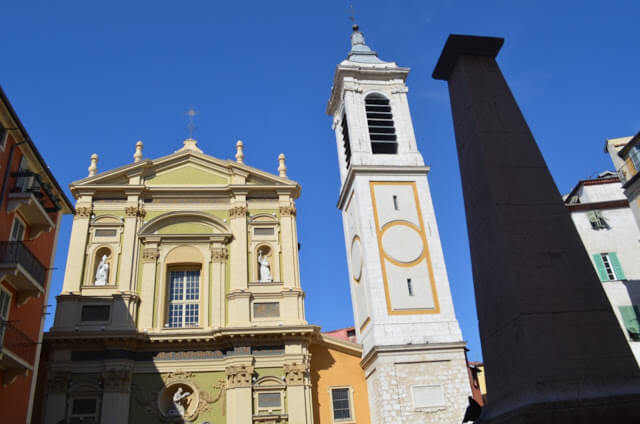 All this is in Nice villa, where the city began to be built, It is a beautiful place to take a few laps in the streets that are part of this town area. 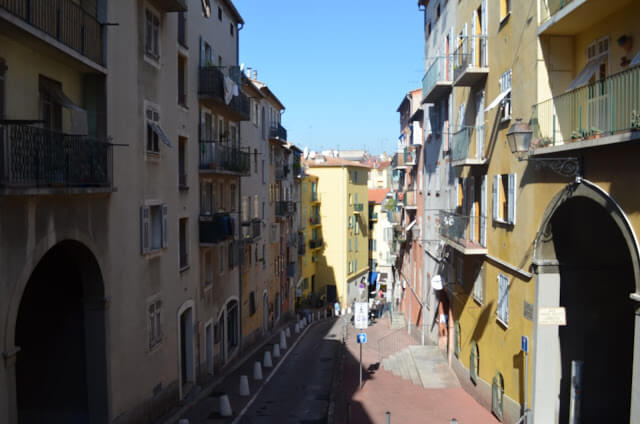 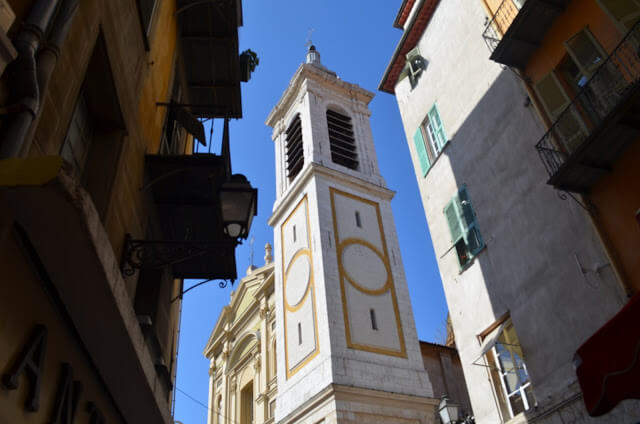 Toward the sea coming almost on the promenade by the sea, We arrived at a square where a fair was going on, and there experience the Socca, a mass that looks like a pizza by format, only it is made of corn is quite tasty and very typical of the city. 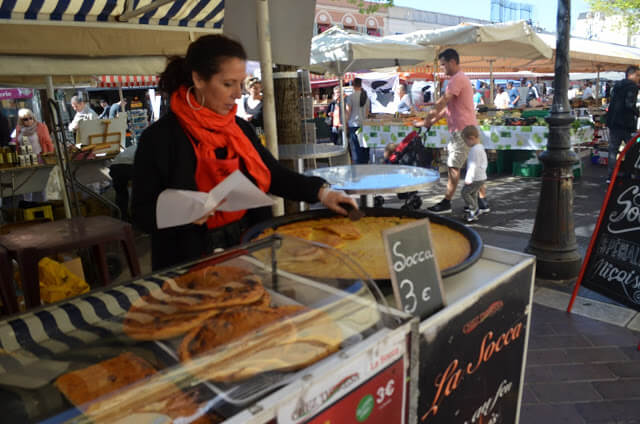 In front of the square is the Nice Opera, a very beautiful building. 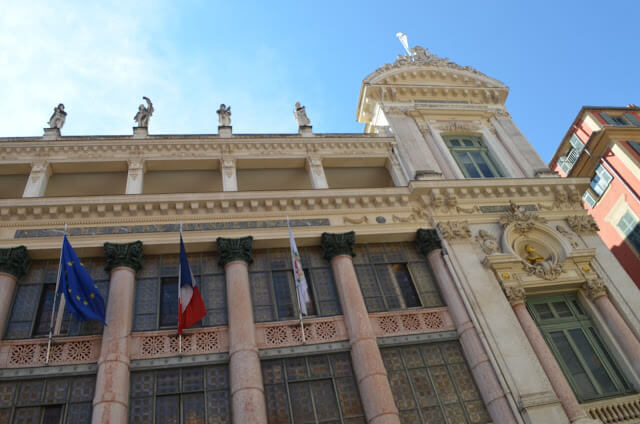 Already turning to Airbnb went to meet the Russian Cathedral has in Nice, it is inspired by the Moscow Cathedral all that color that looks like a candy from a baby, this is pretty nice but for those who have been true in Moscow, You will not find so beautiful, It was our case. 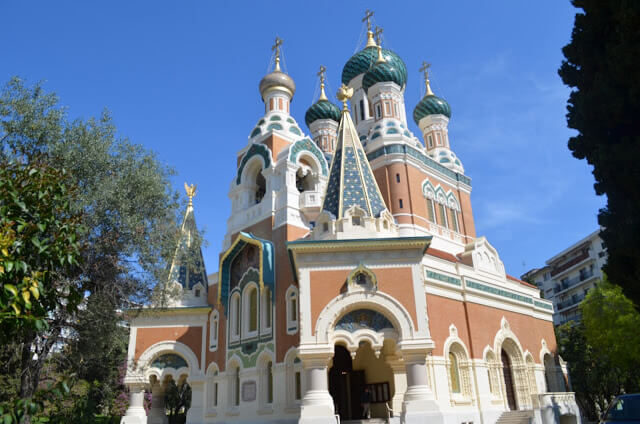 After all that it's about time we change city, we took the car and went straight to our next stop in Saint Tropez.