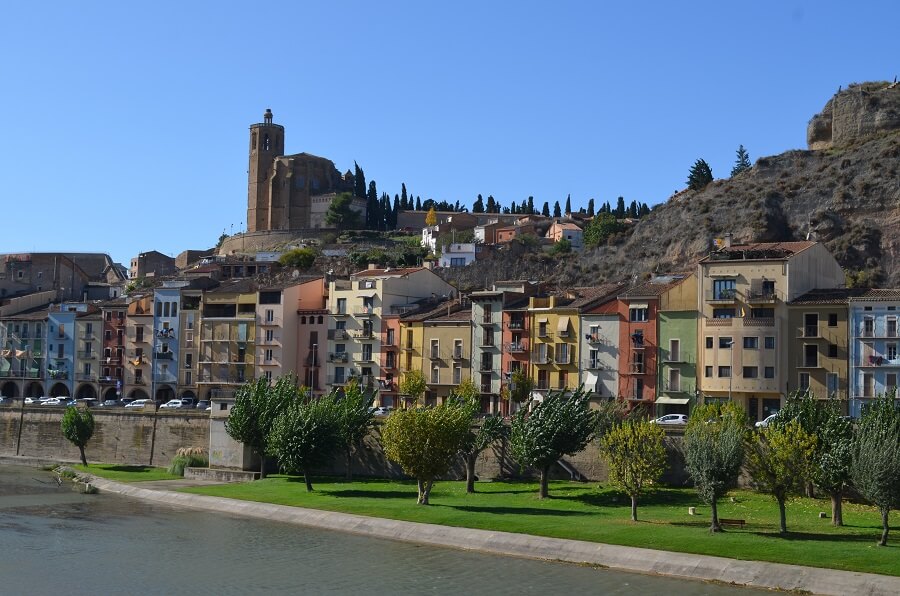 Attractions Balaguer? The town of Balaguer, in the La Noguera region, It becomes more and more a tourist reference of the interior regions of the Autonomous Community of Catalonia, in Spain.

Balaguer, historically speaking, It has much to see and much to talk, and this is due to the large number of monuments which still defy the passage of time: an old neighborhood, medieval walls, remains of an Islamic castle and later Palace of the Counts of Urgell, or convent of Santo Domingo, with the Gothic church of Santa Maria, one of the largest in Catalonia, and a sanctuary, the Santo Cristo, which houses a venerated image for many years and is the symbol and flag of the city. 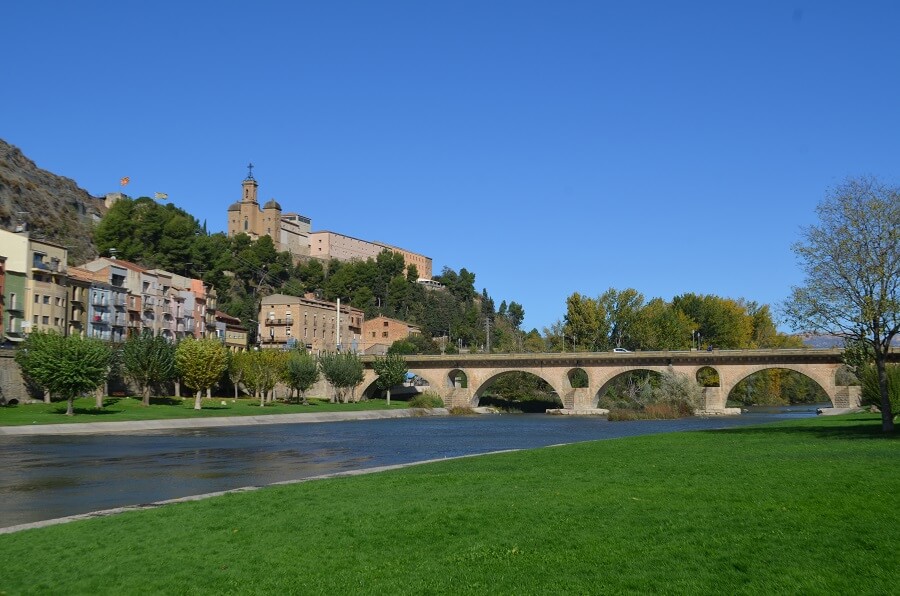 We went to Balaguer in our first Motorhome travel, the city was our last stop, before we went to MontSerrat and Mont-Rebei, know the city because the road from Montserrat to Congost, we pass the town to the road and saw that the city was well in the style we like, medieval, walled and with a river cutting the city, Furthermore in the city center, in a beautiful park, has parking for Motorhome.

We arrived late afternoon on a Saturday, as well as find the beautiful city, we had to go there because we ran out of water in the clean water tank of the motorhome and the city has gas stations to put water.

As we arrived at the end of the day, We stopped the motorhome in the parking lot, We walk a bit by the river that runs through the city and is in front of the parking lot, then we put the table and chairs Motorhome and we were enjoying the view of the city, where we had dinner and a beer.

The next day we stroll along the river in a long way and then went to the old city center.

Attractions Balaguer and what are its tourist attractions?

The Almaty Plain is a large area located behind the sanctuary of Holy Christ. it, Arabs settled today when we reached the land toward 713-715. It is one of the most important archaeological sites in Catalonia. Since 1983, excavations were performed, revealed that an important part of urban structure that existed at the plain.

For its grandeur and location that is at the highest point of the city, dominating all Balaguer, a church of Santa Maria It is the tourist symbol of Balaguer. In 1351, this Gothic church of cut stone and a single nave began construction. It attracts especially with its formal and geometric purity, simple and compact contours, buttresses as powerful and imposing octagonal bell tower. The church is declared a Historical-Artistic Monument. It can be visited on Saturdays and Sundays and pay nothing to enter. 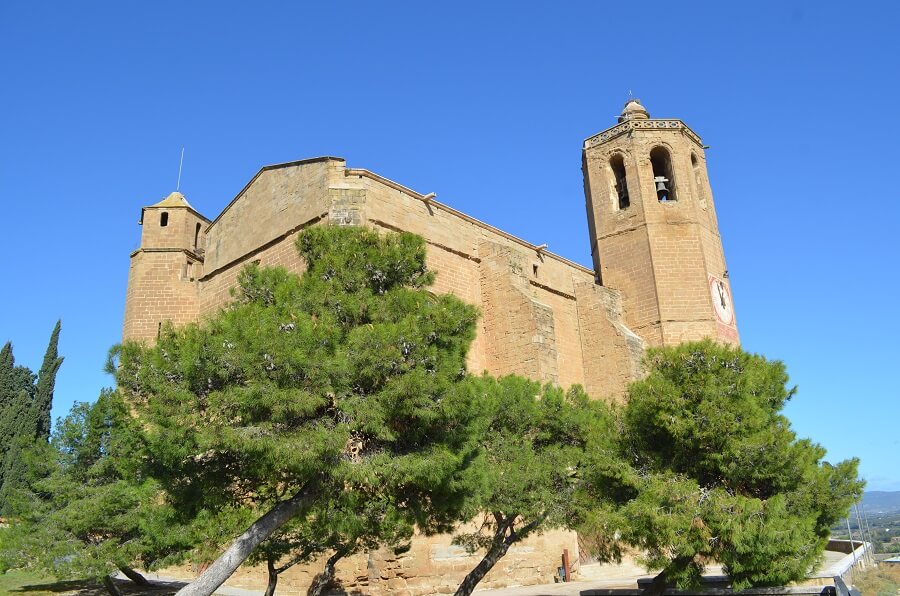 The church, the convent of nuns of the Poor Clares, the rectory and the house of the sanctuary form an architectural complex visible from a distance which makes holy Christ a city identifier. This set out the image that is maintained in Santo Cristo de Balaguer, of great veneration in all regions of western Catalonia and near Aragon. Tradition has it that this image was the first made in the world. Its author was Nicodemus, what, printed with the head the image of Christ on the cross, He decided to do it. The sculpture was burned during the last Spanish Civil War. The current image is the sculptor Joaquim Ros and is an old copy. It is made of wood Flanders and has one foot transplanted saved from the flames. 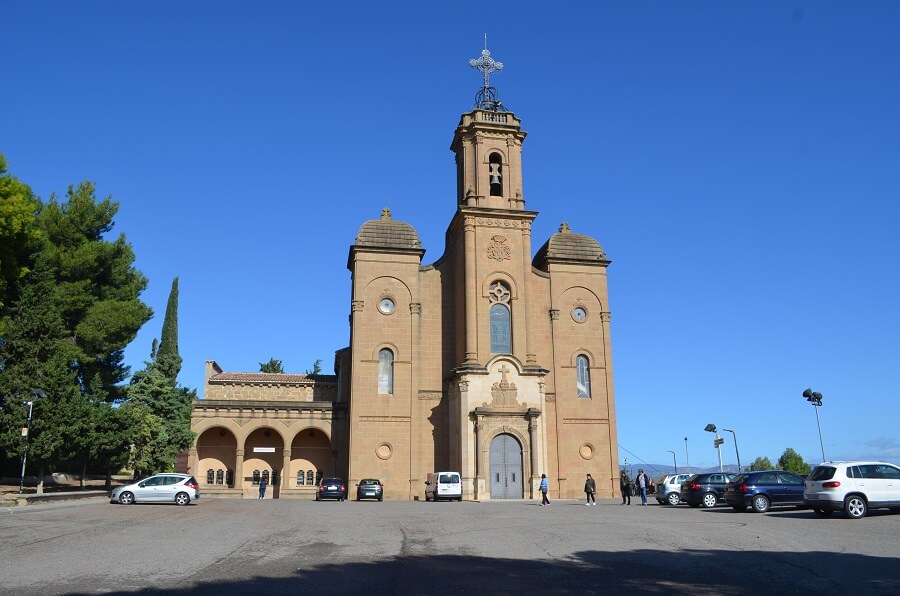 The sanctuary is open every day, within the normal visiting hours, and it is also free.

Also it has a path between the river and the sanctuary, with passages of Jesus Christ's life.

The historic center is one of the few preserved urban centers of Arab training, and makes this old Balaguer one of the most powerful images and identity of all Catalan cities. 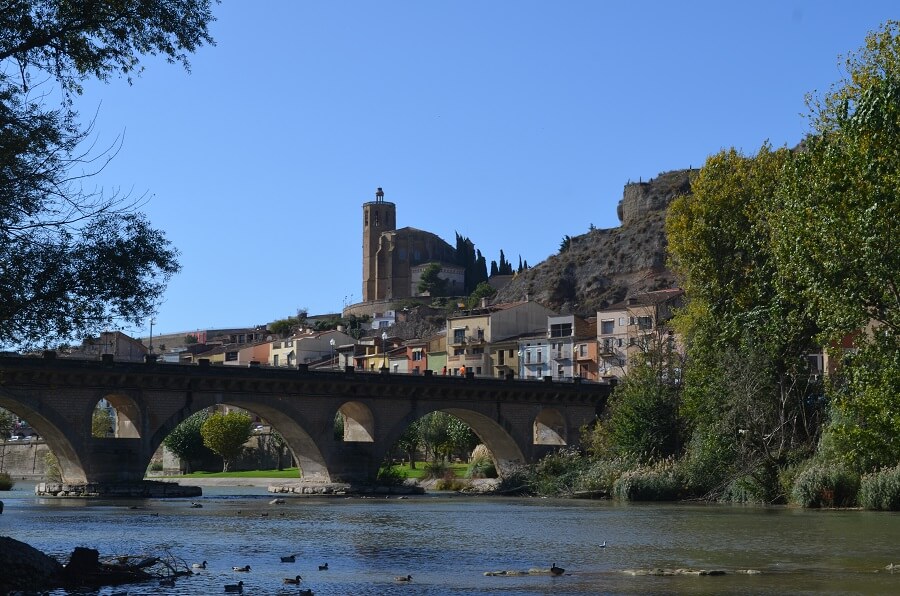 the walls, as the city's backdrop, the wonderful facade the Calle del Puente offers the river and the wide open space of the Mercadal close a dense portion of irregular streets and passages with exceptional features.

O Templo de Santa Maria de Franqueses It is a typical building of the Cistercian: with a Latin cross plan, covered with a barrel vault in the cruise and pointed to the rest of the ship, and with three apses, only one of which is manifested abroad.

Only the temple remains intact from the old monastery, although there are clear traces of other elements that made up the monastic complex, as the closing wall that surrounded him and the spaces dedicated to wine.

The temple has three doors of internal access. O Home, and probably the most recent, It is located at the foot of the ship. The second, located on the south wall of the church immediately after the transept, It would be one that would communicate the cloister with the temple. The third and last of the ports are located on the west wall of the Gospel chapel and hold remains of what would be a covered porch with an edge vault.

The building has three interior lighting elements. The most prominent of the artistic point of view is the rose window of the north face, doubly splendid, and formed inside and outside rings of five.

The walls of the medieval town of Balaguer

The thick walls and consistent woods, with their portals – ice, Torrente, surrounding the urban core and extended as the city grew forming a huge wall that nowadays there are several parts of it and to be able to walk through the wall, we did not go because of the strong wind that was super in the day and was dangerous because, the wall has no handrail. Its construction was next to the birth of the city and partially preserved. To appreciate or enclosure amuralhado, you must access it from the square Mercadal, through the portal Ice, by Wall Street or Cross Street, that will take us to Santa Maria or sector “Drum”. We can see wall screens near the castle and in the neighborhood Firal, next to the cemetery. currently, you can climb a tower to access Ice portal and get to Santa Maria by a walkway. 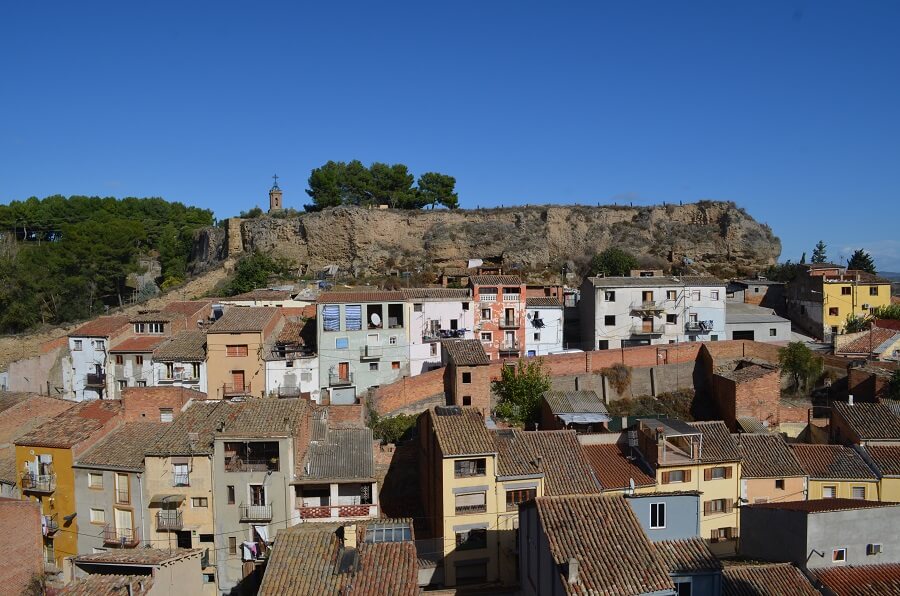 Located in the city bridge, or convent of Santo Domingo foi erected by vontade do Count Ermengol X of Urgell, during the fourteenth century. The convent preserves a Gothic magnificent cloister of fine and delicate columns and a church, whose safe is pointed cannon, very simple and separated by transverse arches that can not cross.

When we arrived at the city bottom, We find the square Mercadal, the largest square Arcade Catalonia. It is the center of the population and is located in the city center. Their 7.000 m2, Besides a wide range of facades and types of porch arches, give it a unique beauty and almost spectacular.

Traditionally, the Mercadal Square is the structure where the weekly market is held every Saturday. Like this, the square becomes the meeting point for people from throughout the region and the commercial activity concentrates the interest of the entire population.

O Castelo Formós, Palace of the Counts of Urgell and Fernando de Antequera demolished, It replaced the old Suda that the Arabs built to defend the city, located at the northern end of the Islamic domains. Its location can be considered strategic: It allows you to exercise visual control of the entire environment.

Today the castle is in ruins and is closed for restoration works, you can only see the ruins of the castle wall.

The Chalet Montiu represents the beginning of the modernist style in the city of Balaguer.

When this style comes to this city, Catalonia, It is in its culminating phase: modernism is born under the influence of the architecture already performed by Domenech i Montaner and Gaudí, and includes the years from 1900 a 1914.

In the early twentieth century, Balaguer was a city of about 5.000 population. The urban core extended to the end of the street Miracle, preserving the old medieval core of the city within the walls. The opening of the walled enclosure, originating in Castelló road, causes the formation and origin of street Àngel Guimerà and the appearance of a number of single-family homes at this location, belonging to families of the bourgeoisie de Balaguer, who choose the new architectural currents to build their homes.

We love meeting Balaguer and now you also know what to do in Balaguer.

He feels like traveling after so many tips? The Blog TurMundial gives you even more tips to ease your travels: Want to book a hotel? Book hotels with great prices by Booking. Want to book an apartment, home, boat or even a tree house and still win 100 real in his first stay? Book all these and many other choices of places with great prices by Airbnb. Want to buy advance tickets for various attractions and tours without those huge queues? Buy Ticketbar Want to rent a car? Undoubtedly indicate the Rentcars.com it seeks the best cars and market values. You need to send or receive money to / from abroad, without paying those absurd charges of bank or exchange houses it Wise You want to avoid problems in the middle of his long-awaited trip? Hire a travel insurance with any of these companies Real Travel Insurance, or insurance Promo You want to avoid those sky-high mobile bills at the end of his international trip? And yet able to do, receive calls and use the internet? Buy an international phone chip with any of these companies: OMeuChip or with the or with the OBS: We emphasize that the responsibility for providing the services / sale and delivery of products, suppliers are described above.
CategoryEurope What to do in Spain?
TagsBalaguer Balaguer historic center destination RBBV Europe Church of Santa Maria Attractions Balaguer? What to do in Spain? Plain Almaty Shrine of Santo Cristo