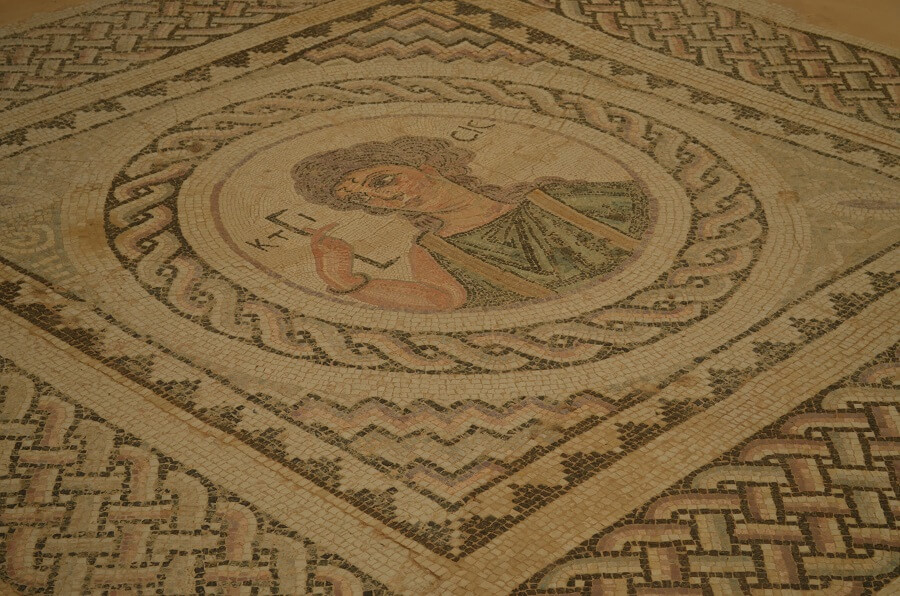 Things to Do in Limassol? Limassol is a town in Cyprus coast much visited for its many Greek ruins, Roman and other civilizations and among these ruins are pretty well preserved mosaics super, want to know more about this city? We count all here.

We went to Limassol, a journey that made by 10 days in several cities in Cyprus, We choose Limassol know for its ruins and to be in the path between two of the main regions of the country, one is Ayia Napa and the other is Paphos, places with beautiful beaches of the Caribbean Sea style, but in the Mediterranean Sea.

As I was on the road between the cities and has many tourist attractions on the way, We stayed overnight in The Village Hotel, a good hotel, with excellent location, air conditioning, mandatory item in summer Cyprus, fridge and as we were with the rental car RentCars we needed a hotel with parking and they have included in the rates, besides being a hotel with a very cheap price.

The Limassol attractions Cyprus and what are its tourist attractions?

Before and after arriving in the city has many tourist attractions, the first day we left early from our hotel in Ayia Napa and, Our first stop was Kalymnos Beach, a beautiful black sand beach, which has a huge and beautiful white rocks by the beach. 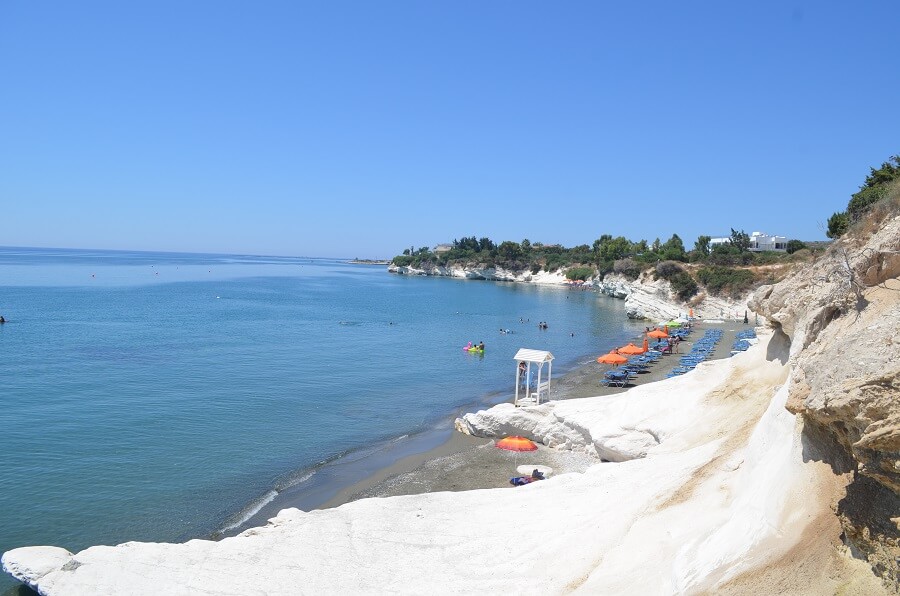 Soon after the Kalymnos Beach, It has other beaches with white rocks to White Stones and the White & Rocky Beach, but we found the most beautiful beach in Kalymnos because it has these white mountains and a beautiful beach. 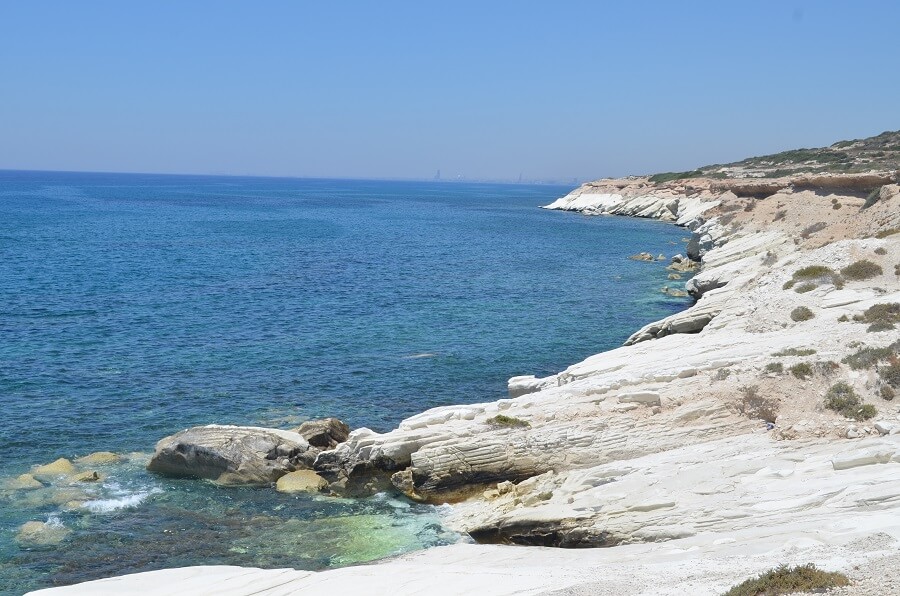 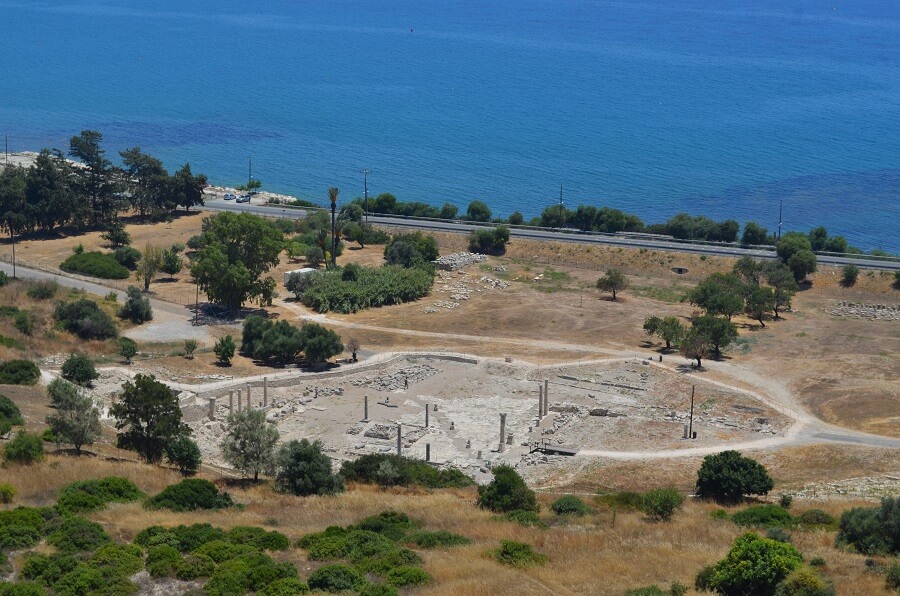 Amathus I Amatunte It was one of the oldest cities in Cyprus. The city had a cult of goddess Aphrodite, the ruins are not as well preserved as other cities of that time we were already visit, but it is very interesting. 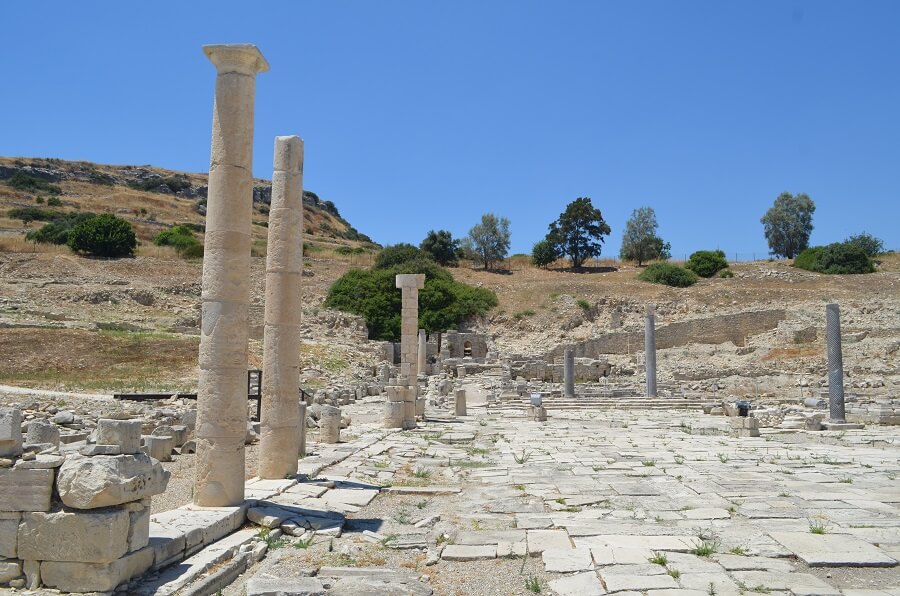 The Amathus very prehistory mixture with Greek mythology and architecture, the city prospered for a long time due to its location between Europe and the Middle East.

These ruins are also Church of Tychon (St. Tychon) and the Acropolis of Amathus, on the mountain. 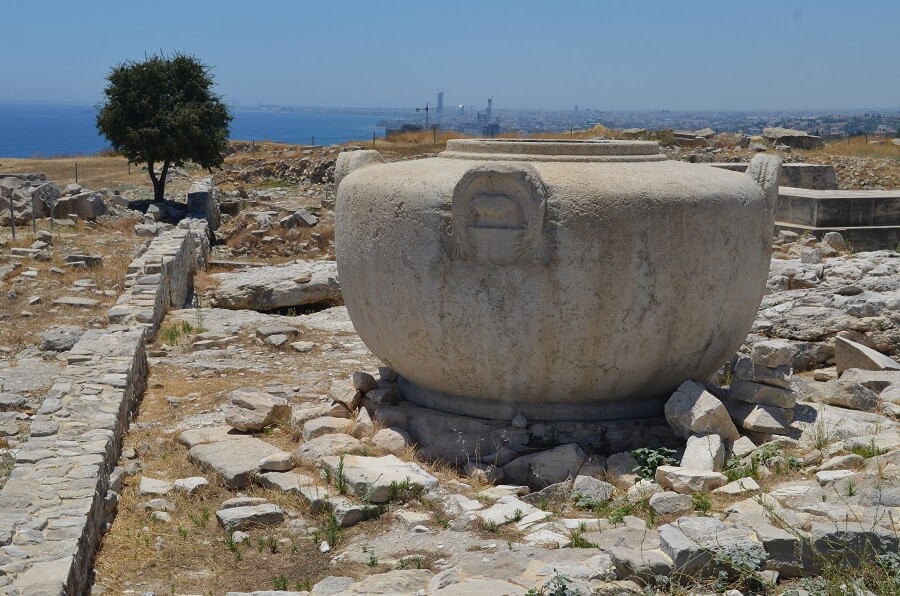 A part of the ruins is free, the coolest part is paid, but it is very cheap, 2 EUR per person.

Kolossi Castle, It is an ancient fortress of the Crusades, We had great strategic importance in the Middle Ages, It was constructed in 1.210 by the Order of the Knights Malta. 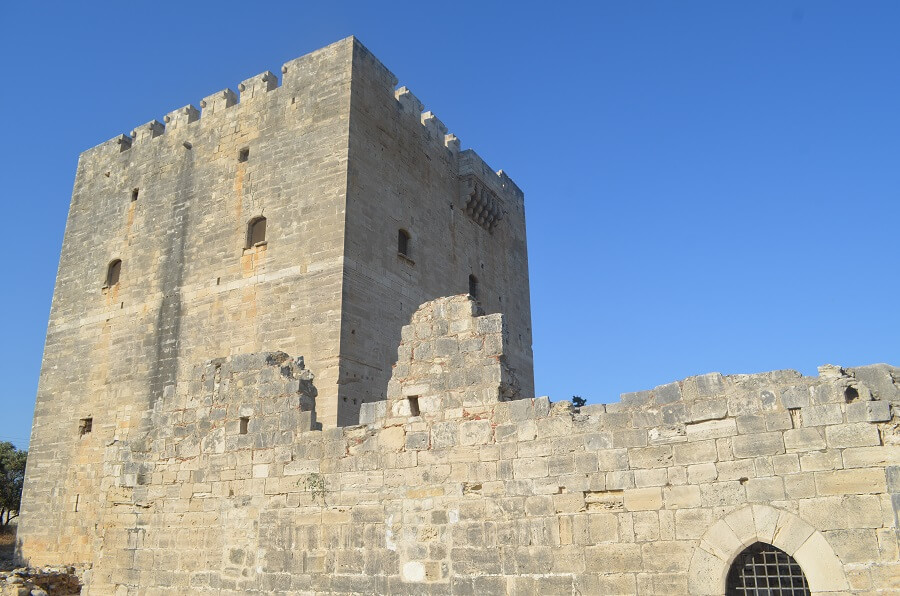 There was held the wedding of Richard the Lionheart and Berenguela of Navarre, legend has it that the governor of Cyprus imprisoned the princess and the king, because he defeated the former governor and took over the entire island. 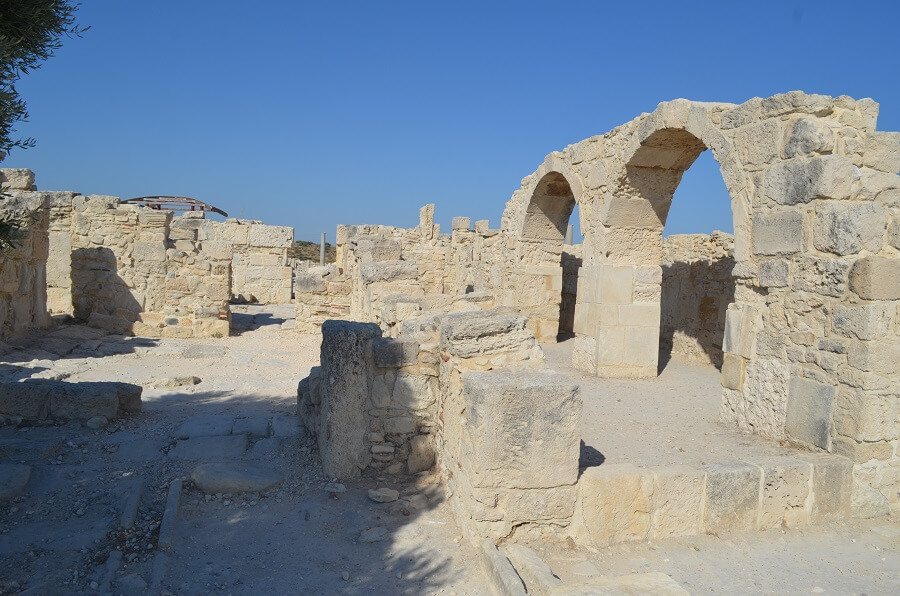 Amphitheater Old Κourion. One of the most beautiful and interesting lecture halls we visited for its ocean view. You will be surprised with its majestic appearance, the beauty of the preserved ancient mosaics and the magnificent panoramic view that opens the seats of the spectators. 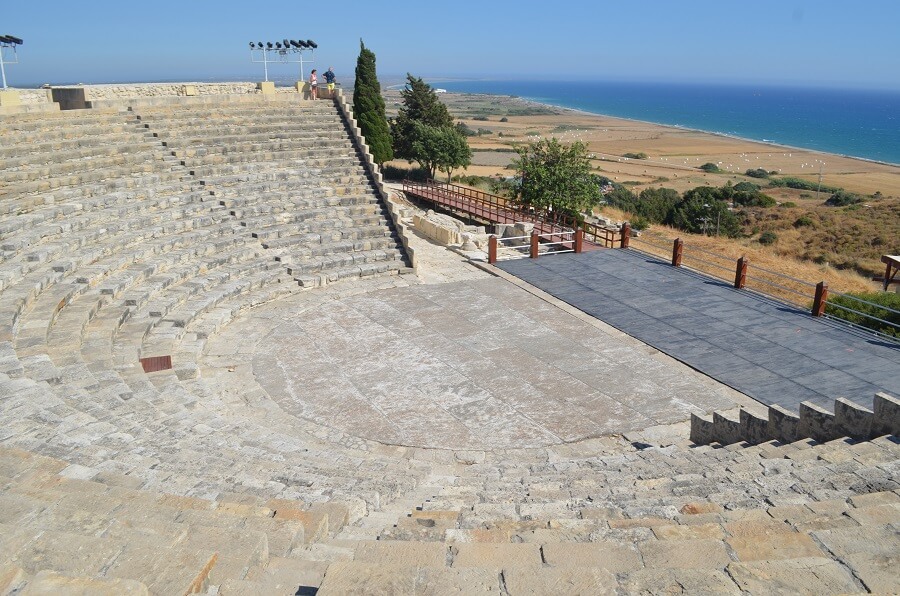 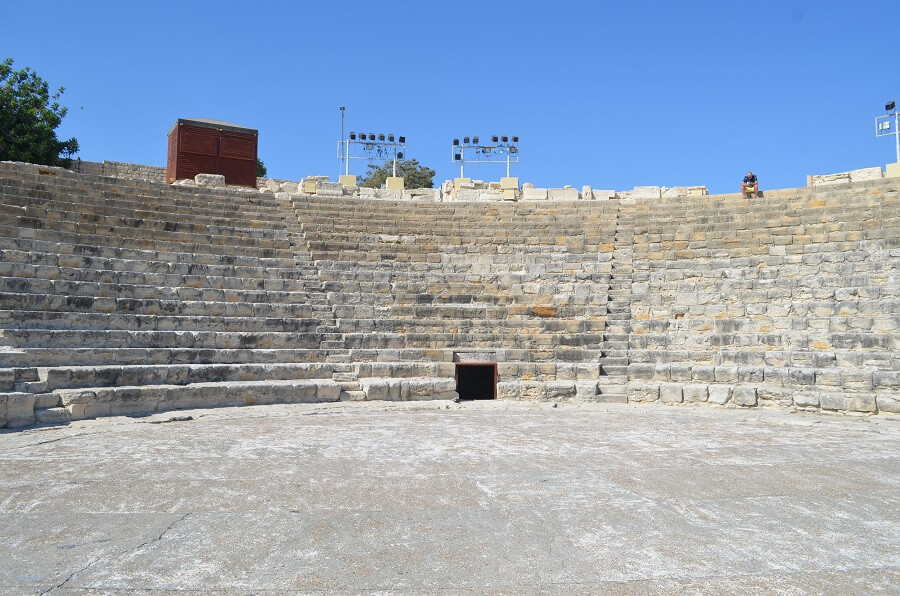 Κourion Amphitheater of Old was built by the Greeks in the second century A.C. and was later rebuilt several times by the Romans. This is one of the oldest arenas in the world, preserved until the present day. As the old city of Kourion was abandoned in the Middle Ages, the researchers found the amphitheater relatively recently, only in the mid-twentieth century.

After reconstruction, in the theater you can see interesting performances of the plays of Euripides, Sophocles and Aristophanes. The theater is also used as a place for concerts. We did not have the luck to see a spectacle of these there. 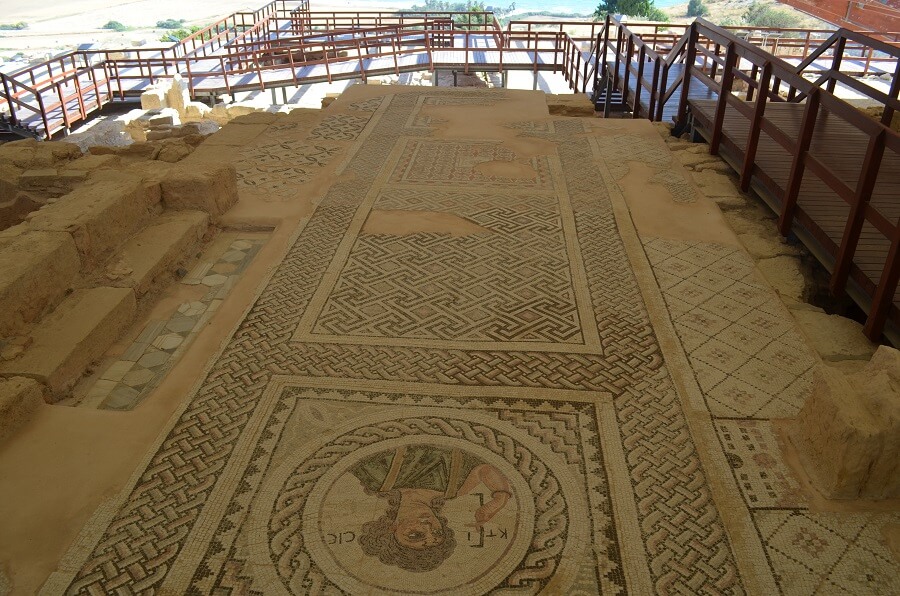 O Sanctuary of Apollo Hylates, It was a pan-Cypriot sanctuary, the third in importance, second only to the gods like Aphrodite.

Na House of the Gladiators, structure dating from the late third century D.C and has been interpreted as a private residence elite, or perhaps more probably as a public lecture. There are the wonderful mosaics on the house floor. 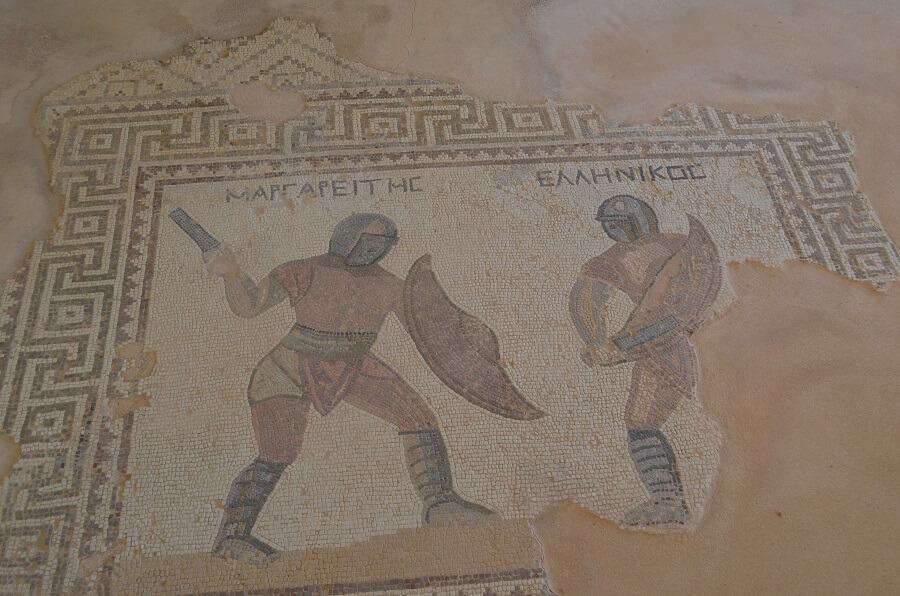 Would talk to a lot of interesting things Kourion, because it was an impressive place we saw in Cyprus and we had no idea of ​​the greatness of these Greek and Roman ruins there.

After this story went to the bath Chris Blue Beach, a beach that is in front of the ruins and there you see this beach. The beach by the standards of Cyprus is quite normal, the area of ​​Ayia Napa is where the most beautiful beaches, there we took advantage and had lunch at Restaurante Sunshine, as already noted in other posts Cyprus food in the country is very cheap and very good. 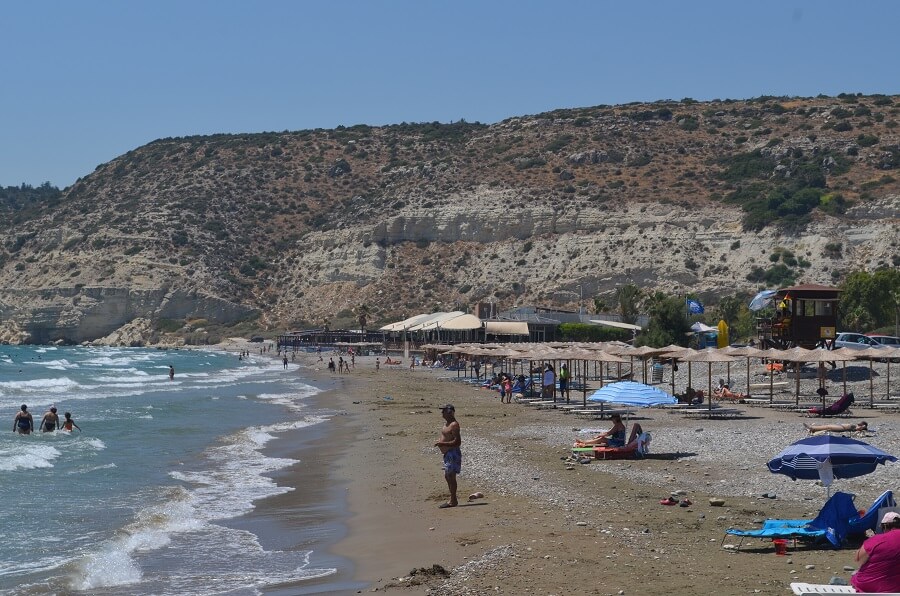 After visiting all during the day, we went to our hotel, take a rest, take a bath and of course going out to meet Limassol at night, We went hiking in seaside town, a very beautiful promenade, the harder it is to find a place to stop the car, it has several parking lots, but all are well filled, but we were lucky and got a job after a few 10 minutes waiting.

The boardwalk ends at the port of Limassol, there has several restaurants, we were in Kipriakon, I ordered a pork rib, It came a giant dish with a 750 grams of meat, it was wonderful and cheap, Pri asked for a dish also very tasty but do not remember what it was, just remember that it was good lol.

Even in town the night we passed the Limassol Castle, it was all lit up.

The next day already heading toward to the next town that we base, the city of Paphos, stop on the way to know the Beach Aphrodite (Aphrodite Beach), where according to legend was the place where the Goddess of Love and Beauty was born, behind one of the stones that are in front of the beach. Like other beaches in the area, It is not pretty and she is soooo stone, It has sand, but it is a must for the history of the Greek goddess. 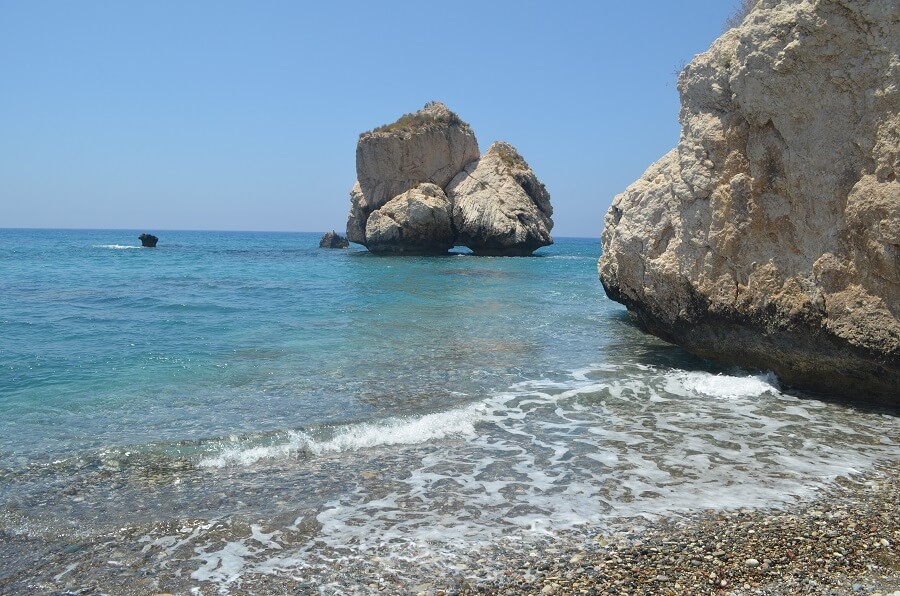 That day in the afternoon we went to other beaches already in the city of Paphos, but that will count more in the post about Paphos. 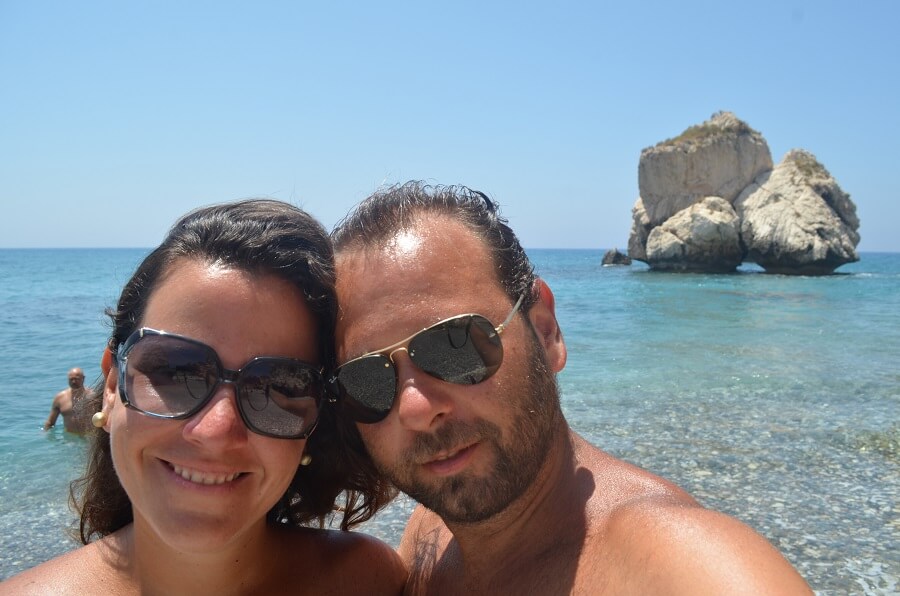 He feels like traveling after so many tips? The Blog TurMundial gives you even more tips to ease your travels: Want to book a hotel? Book hotels with great prices by Booking. Want to book an apartment, home, boat or even a tree house and still win 100 real in his first stay? Book all these and many other choices of places with great prices by Airbnb. Want to buy advance tickets for various attractions and tours without those huge queues? Buy Ticketbar Want to rent a car? Undoubtedly indicate the Rentcars.com it seeks the best cars and market values. You need to send or receive money to / from abroad, without paying those absurd charges of bank or exchange houses it Wise You want to avoid problems in the middle of his long-awaited trip? Hire a travel insurance with any of these companies Real Travel Insurance, or insurance Promo You want to avoid those sky-high mobile bills at the end of his international trip? And yet able to do, receive calls and use the internet? Buy an international phone chip with any of these companies: OMeuChip or with the or with the OBS: We emphasize that the responsibility for providing the services / sale and delivery of products, suppliers are described above.
CategoryEurope What to do in Cyprus?
TagsAcropolis of Amathus Amathus Amatunte Ancient Amathus Ancient Kourion House of the Gladiators Kolossi Castle Cyprus Chris Blue Beach Curio destination RBBV Europe Church of Tychon Things to Do in Limassol Beach Aphrodite Kalymnos Beach Amathus Sanctuary of Apollo Hylates White & Rocky Beach White Stones