Things to Do in Lucerne? The charming city overlooking the Lake of the Four Cantons

May 24, 2018 0 By Christian Gutierrez and Priscilla Gutierrez

Lucerne a small city in Switzerland, bathed in the River Reuss and Lake Lucerne, as well as other Swiss cities, its charm is the landscape between the waters of the river and lake in the middle of the charming town and some background Alps in the winter and even in early spring (time we were there) They are snow. Then you ask, what to do in Lucerne? And here we will tell what we did there.

Lucerne is in the Switzerland whose official language is German, Switzerland has four official languages ​​in different parts of the country, that are: the German, The french, Italian and another who had never heard in my life, or romanche, the city is very small, up to the standards of European cities, it has only 80 thousand inhabitants.

We made a four-day itinerary for Switzerland, We had been through Zurich, e Lucerne It was our second stop, then from there even went to Lausanne, Montreux e Geneva, Our trip was made whole train, the best way to travel through Switzerland, which has a great and extensive rail network and car hire is expensive there, not only for rent, but also for parking. 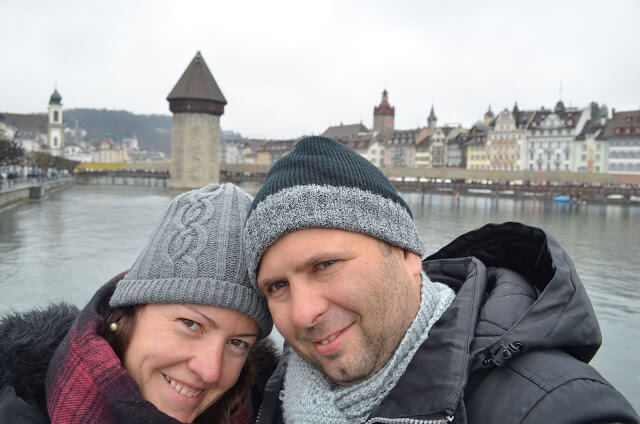 We were in town for a day and slept there, It was long enough to know the city, but of course if you can get an extra day would be ideal. 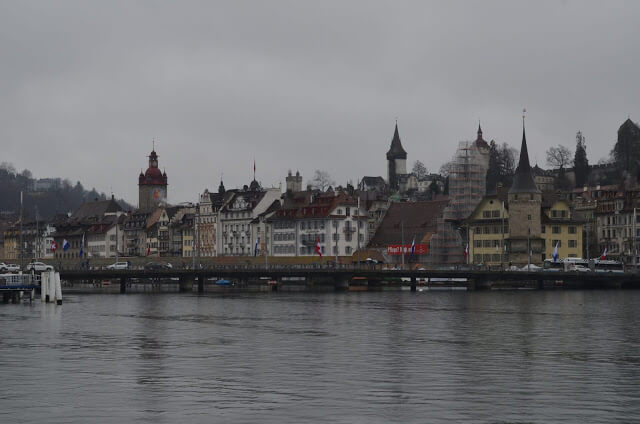 Things to Do in Lucerne, and what are its tourist attractions?

Many magazines and websites focus too much on a single attraction of Lucerne, a wooden bridge Kapellbrücke, but the city is not only that, has many other tourist attractions in Lucerne. 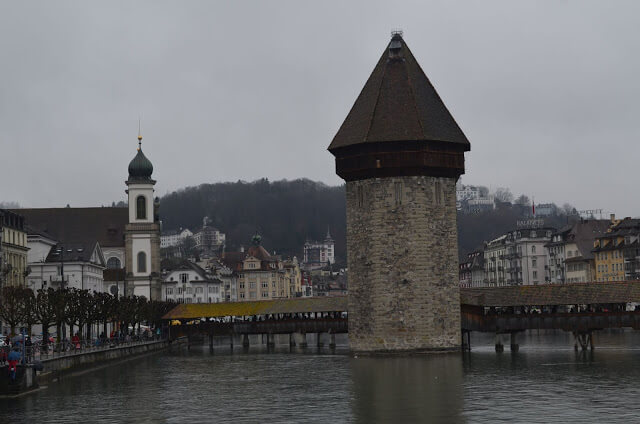 We arrived in the city by the Lucerne train station, and we booked a hotel right near the station and also the center, because we like to know the walking cities, the hotel we stayed at is the Hotel Fox it has a good price, a great location and all those facilities have wi-fi, bathroom in the room and everything, we got up early and went straight to the hotel to leave your bags at the front desk because it was very early and we thought we could not check-in, but as the hotel was empty and the front desk lady was very friendly and let us check-in and up to the room. 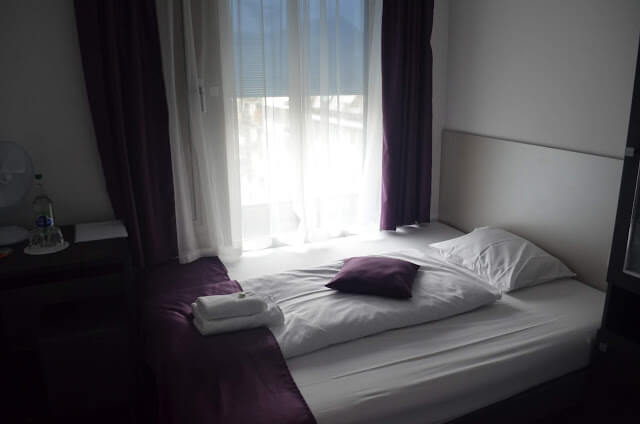 That day we did not have much luck because it was a very annoying drizzle, but that did not stop us we left for the city, first we went to a park on the edge of Lake Lucerne, O Parque Inseli, a beautiful and flowery park and the summer has even a small “Beach” which should be full of tourists and locals, park the view of the Alps is also very pretty. 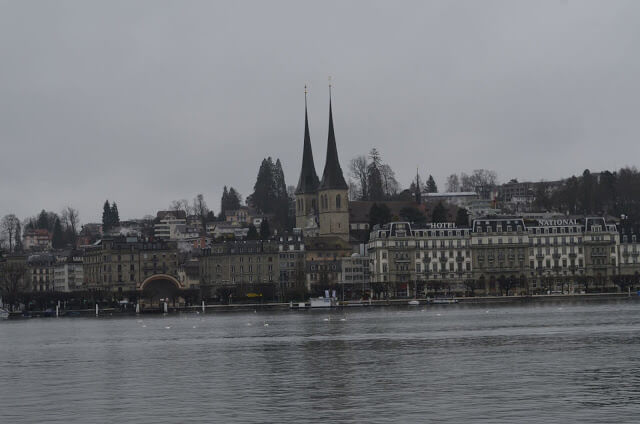 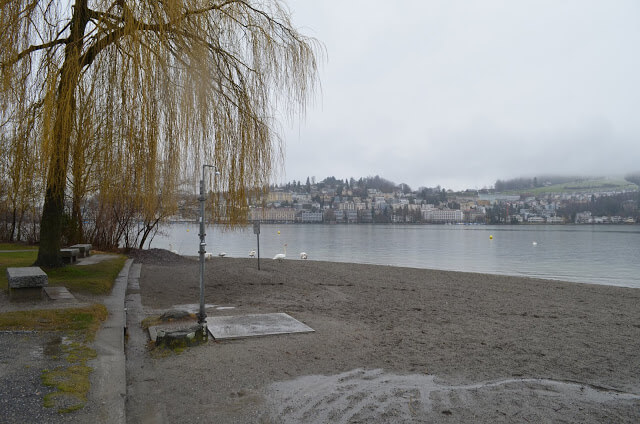 After the park we went back to the city center, in front of the train station, where you have the boat companies doing cruise on Lake Lucerne, we wanted to do the tour which was included in the price dinner on the boat with fondue, I even had a cheap price to Switzerland, us 30 EUR per person, but a shame that on Saturday, day we were there, had this tour, the company that makes the tour is the http://www.lakelucerne.ch/ if you want to date and able to do the tour, also has other shorter trips but we were not in order to make, because we wanted to see more of the city than the lake. 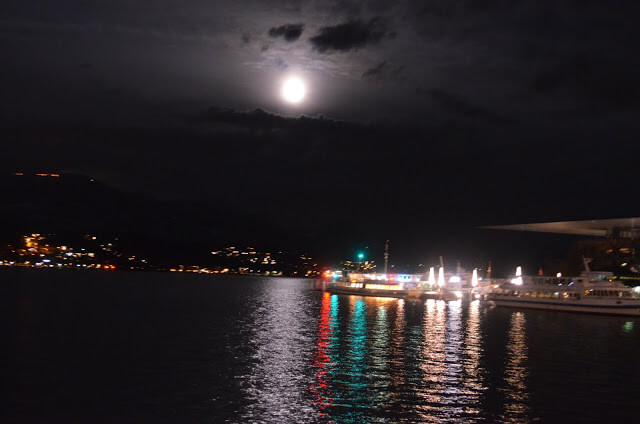 Just next door has wooden bridge Kapellbrücke, the postcard of the city, the bridge is over the river Reuss, she is the covered wooden bridge oldest in Europe, the bridge beams are 112 dating from the seventeenth century and paintings were restored in the twentieth century, the bridge went through fire that destroyed it in 1993, but in 1994 it was rebuilt, the bridge is well filled, find the most beautiful it is to see her from the river, the bridge is not straight, It has a small deviation in it. 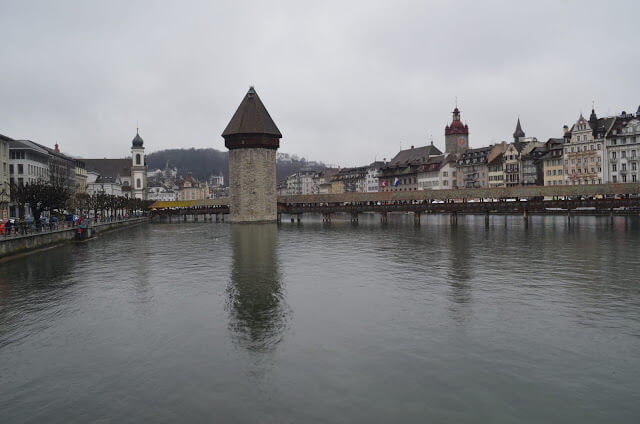 At the end of the bridge has Water Tower (built around 1300) accessible via the bridge, in good German style. 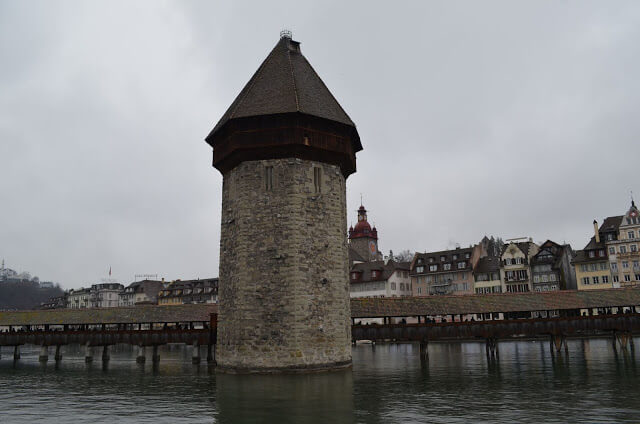 That day had a street fair beside the bridge, a fair with some delicious foods, we bought a very tasty bread and cheese gorgonzola style just that much more soft and tasty, one of the cheeses we love and have eaten, a stall that sold the cheese was a super nice Italian, while I was buying this for our delight “lunch”, Pri found a store Swiss chocolate selling hot chocolate, and then we eat bread with cheese delight and a very tasty hot chocolate, but it was not the best.

The city has numerous churches, including most importantly the Hofkirche Renaissance church of the nineteenth century, the Franciscans in the Gothic style but with several altars and chapels in Baroque style (c. 1200), and Jesuit (1560) the first baroque church of Switzerland.

The first we met was the Jesuitenkirche (Jesuit church) It was next to the crafts fair, the church is beautiful, more normal, It has others in the most beautiful city. 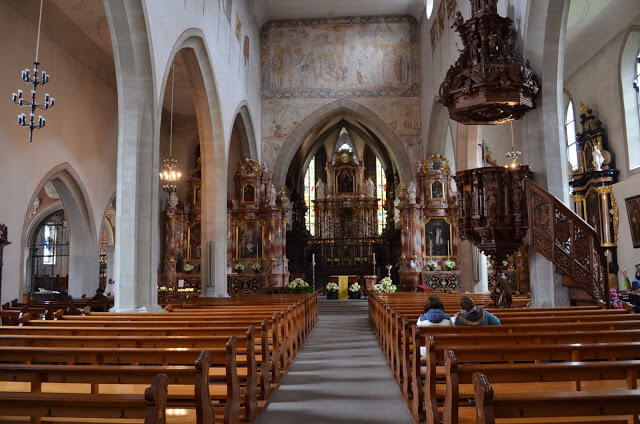 A Franciscan church (Franciscan Church) Gothic is also beautiful, but the last we saw and we will soon tell the post is the most beautiful.

Continuing our tour we know the other wood bridge, and Spreuerbrücke, another bridge covered with Baroque paintings depicting the dance of death (Totentanz), the paintings are of the same style, this bridge is less famous, the first to speak is the most beautiful even. 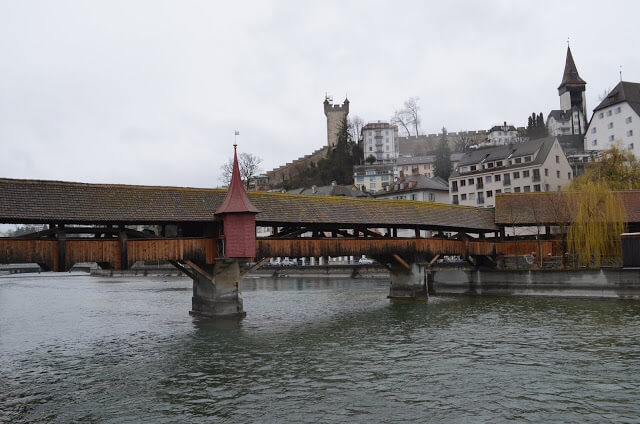 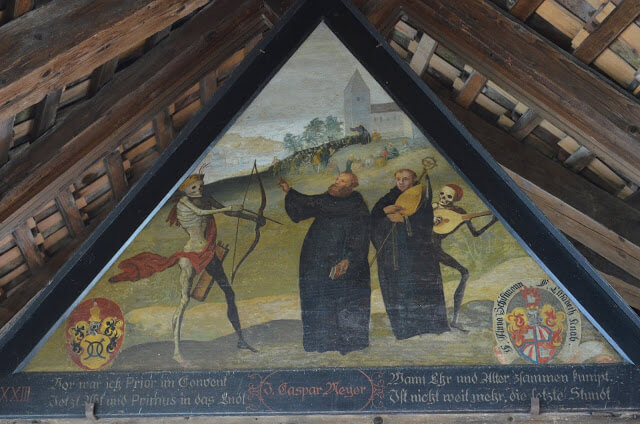 The place we like the city were city ​​of medieval wall remains (Museggmauer), and its seven towers the Nölliturm, Männliturm, Luegislandturm, Zeitturm, Schirmerturm, Allenwindenturm e a Dächliturm, this wall protected an ancient castle that existed in the city, today just left a part of the wall and towers, they can be visits and the coolest is to walk on the wall with the view of the city, and one of the towers, It has a system with a tower clock for display. 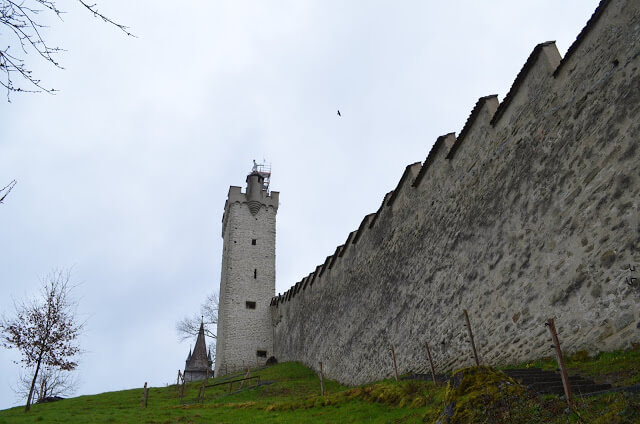 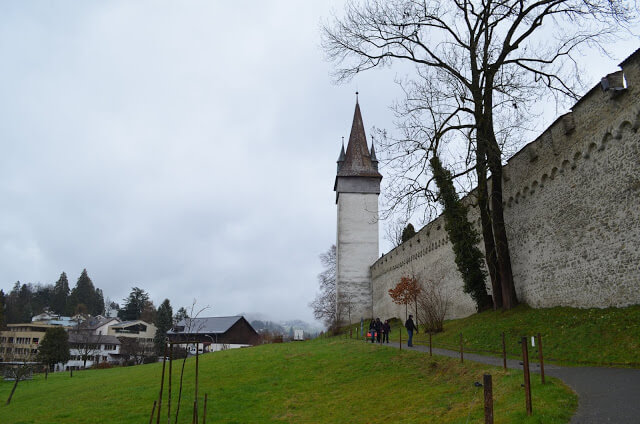 The wall is across the river Reuss River, as well as other tourist attractions in Lucerne, the park or square with the lion sculpture in stone the lion monument, is impressive sculpture and Lion detail made within the rock, in front of the lion has a lovely lake. 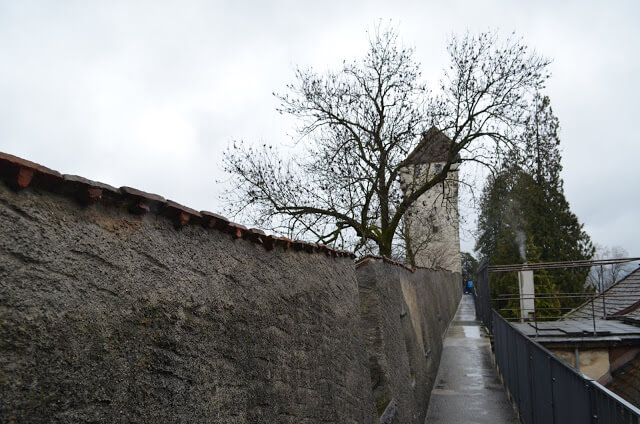 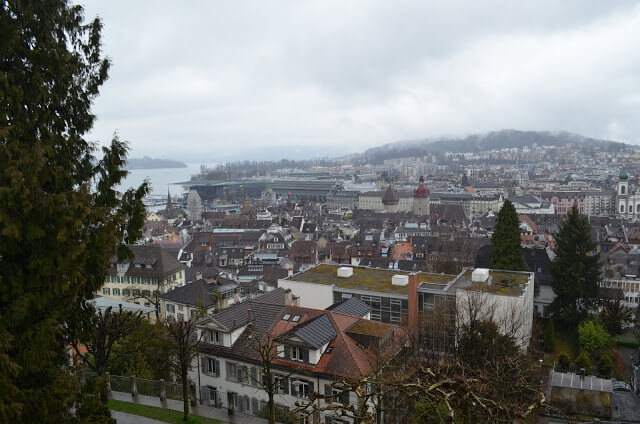 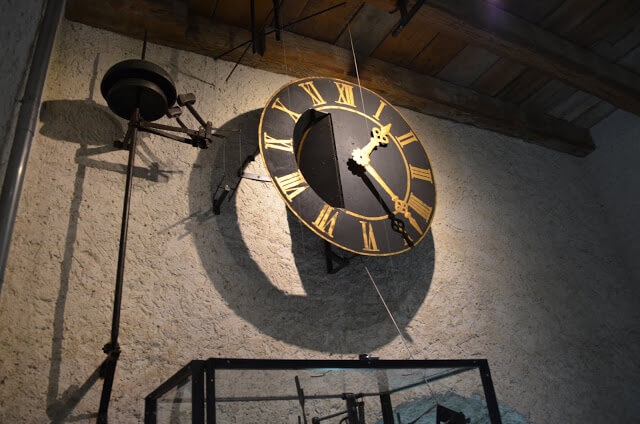 At that time we were a little tired and stopped to rest your legs taking a Swiss beer in Bar Alpineum coffee bar, I do not know if still commented on this post, but the Swiss is a very expensive country, one pint (pint of beer) we spend uns 7 euros. 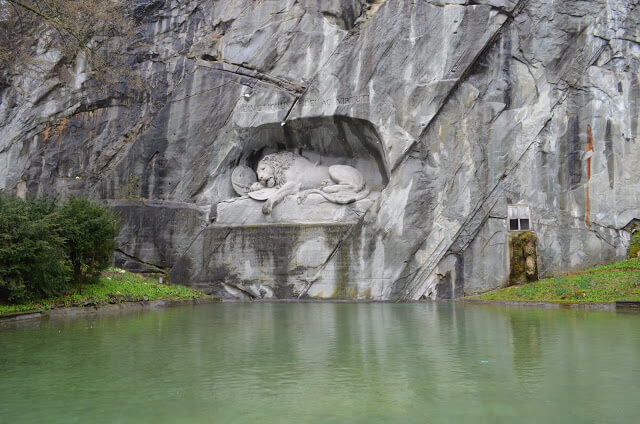 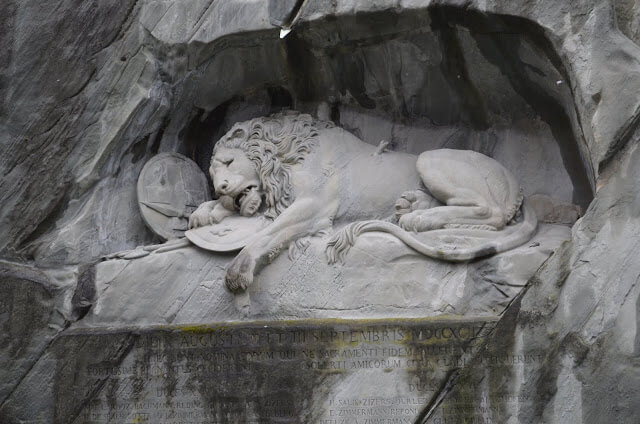 After the break we know the last places that lacked know, a Igreja Hofkirche St. Leodegar, Renaissance of the nineteenth century but is a very beautiful church with a staircase in front, worth a down payment and know the church. 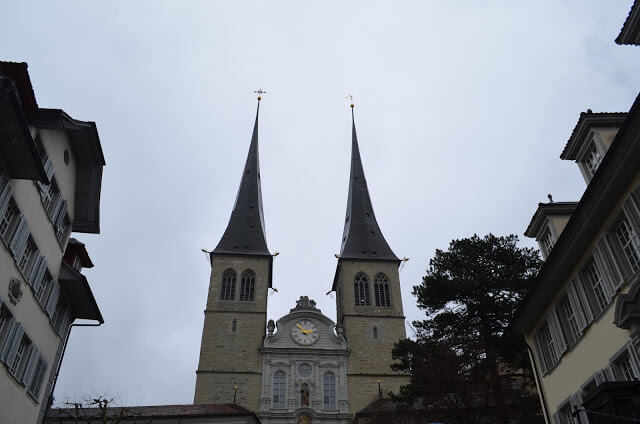 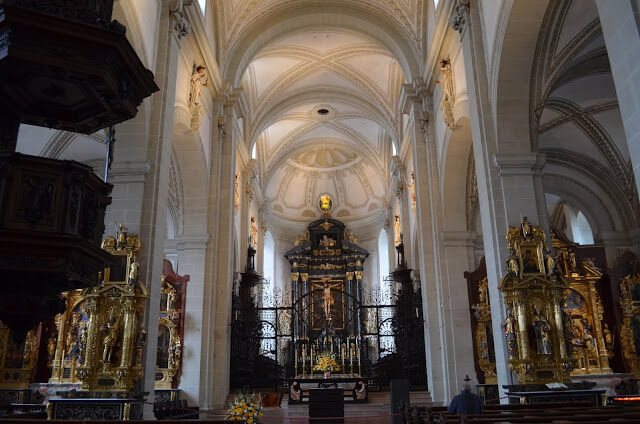 Other interesting places are: O Altes Rathaus Lucerne uma fonte and the narrow streets with Swiss flag, and the square Hirschenplatz. 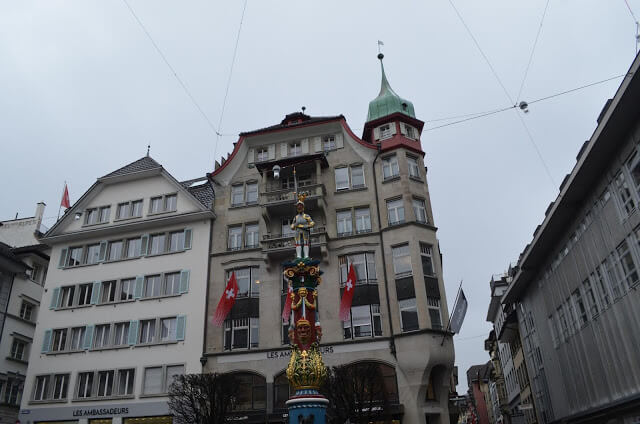 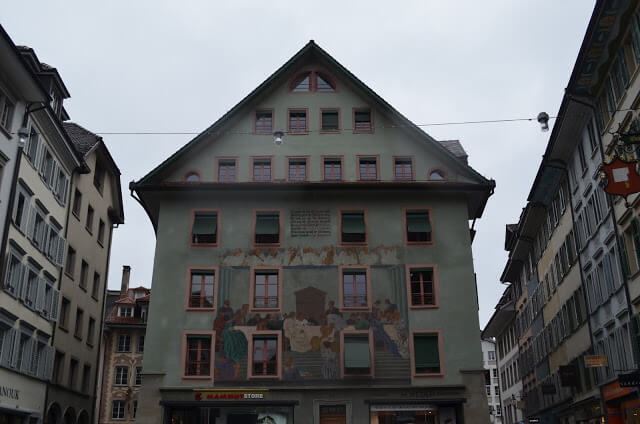 If you want a hint restaurante o Zunfthausrestaurant Pfistern, It has fondue and seems to be a very good place, but prepare your pocket for a dinner for a couple with wine (the cheapest), will not leave for less than a 100 euros.

As we like to travel more than eating, we had lunch in the Lucerne train station at the Coop supermarket, You have a ready-made dishes to eat, like a restaurant with a mini buffet, and very very cheap, we bought food ali, not remember exactly the amount you paid, but it was cheaper than again eat at Mc Donalds, that even it is expensive in Switzerland, the Big Mac costs a snack 12 euros, that's right 12 euros!! Spain is half that, the supermarket also bought some beers to take and wait for nightfall.

As we wanted to see the bridge and the city lit, something that always like to know is the night city and its illuminated monuments, We passed again by the Kapellbrücke Bridge and at that time the annoying drizzle was over, then we have taken a big turn for the city. 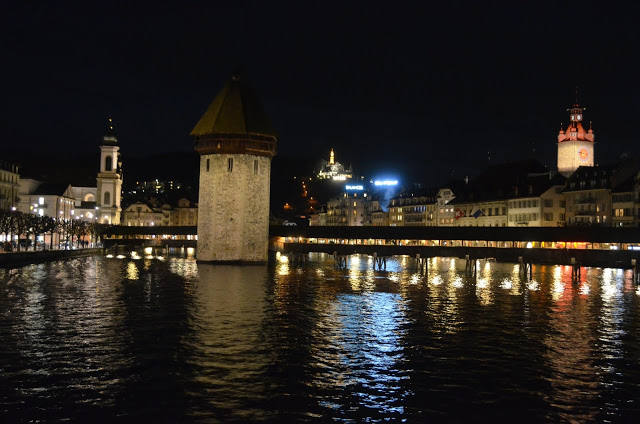 These were our tips dwhat to do in Lucerne, see also other posts from other cities and our screenplay by Switzerland.

CategoryEurope What to do in Switzerland?
Tagsdestination RBBV Statue of Lion Europe Lake Room Cantons Lucerne MuralhaMedieval Museggmauer Things to Do in Lucerne ponte Kapellbrücke Main attractions of Lucerne Switzerland

What do Geneva? City that enchanted us