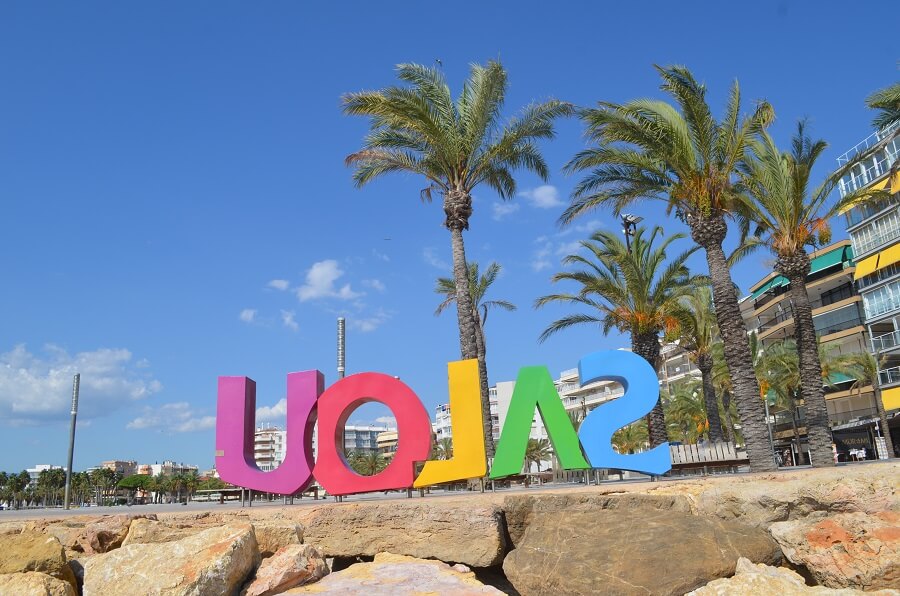 what to do in salou? Salou is one of the cities of golden coast on the southern coast of Catalonia, city ​​very visited by older people and by parents with children who go to the PortAventura World amusement park.

We went there to see the beaches and the city, that we like to visit all the cities that are close to Barcelona, where we live, and other cities in the world too.

We went to spend a holiday there from 3 days, we leave Barcelona on Friday after work we leave at 3pm, because the marketing agencies in Spain on Fridays have a special schedule from 8:00 am to 3:00 pm.
It took us a while to get to the airport because of the holiday traffic and rain, here from time to time there is traffic, especially when it rains, people don't know how to drive very well in the rain lol. 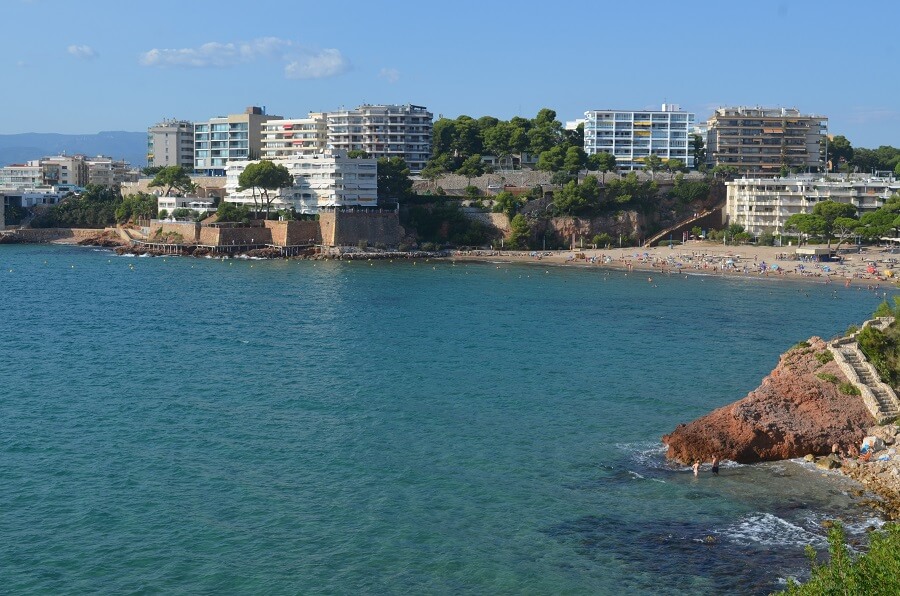 Arriving at Barcelona airport where we rented a car with rentcars, at the rental store GoldCar, we had a problem with the attendant who, instead of making a pre-authorization of the insurance deductible, charged the entire amount and this had never happened to us, we have rented cars several times and almost all with GoldCar, and the worst thing is that the attendant said that he could only cancel the charges and that he could not do otherwise, we believe these rental companies are doing these things to make more money, because the coronavirus crisis hit them too hard, we managed and exchanged for Europcar we made a last minute internet booking, when the car was removed, everything was fine, but the Europcar attendant said that there was no one in the garage to check the car and that if we saw any problem in the car, we would take pictures of the car., this we always did, we took pictures and videos to have proof of how the car was before we took it., and that day was no different, glad we did, because after returning the car they wanted to charge 600 euros for a risk that was already there and we had to send the photos and videos to prove them wrong, in the end they didn't charge anything more, but it is the tip, take photos and videos of rented cars for proof.

As a result, it took us even longer to arrive in Salou, first we went to the supermarket to buy food and drinks because we rented an aparthotel with booking called RentalMar, it was a very nice apartment, with kitchen, balcony and pool.

what to do in salou, on the Gold Coast of Catalonia, Spain?

1DAY
As we arrived at night we went out for a walk in the seafront promenade close to Salou light source, where there are many restaurants and bars, a very busy part of the city, in addition all beach kiosks are open serving drinks, and there are some with very beautiful decorations. 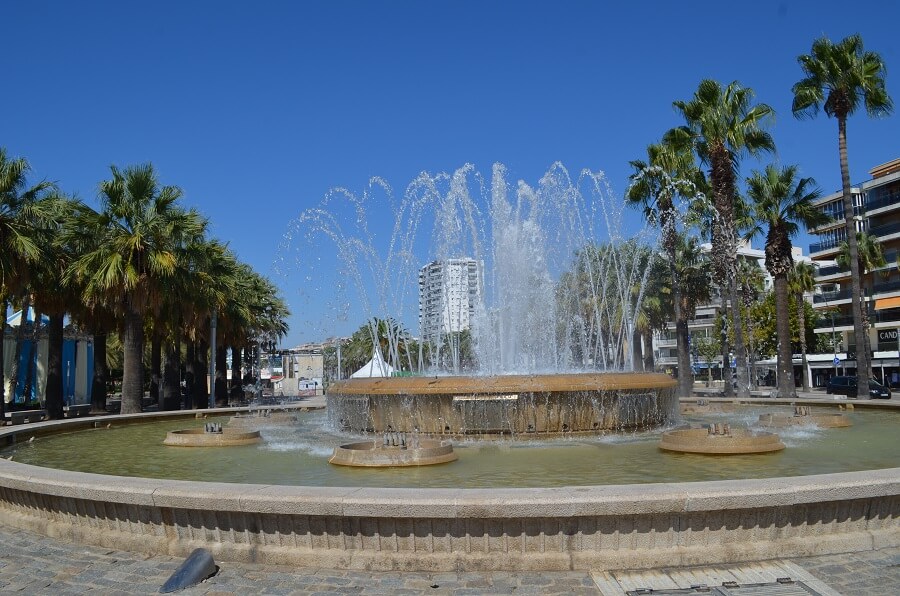 We do not Restaurante Caffe of Mari we eat pasta with seafood and capeletti, more drinks per 42 euros, good food. Bar and restaurant hours were reduced due to COVID restrictions 19, and at midnight they already closed.

2first day
Day to discover the beaches of Salou, first we stay at Levante Beach, which is the beach in the city center, it was very crowded, it was even having a fight for spaces, because of the social distances that must be made because of the coronavirus, the beach itself is not very beautiful, but to spend a day with family and for elderly people it's ok. 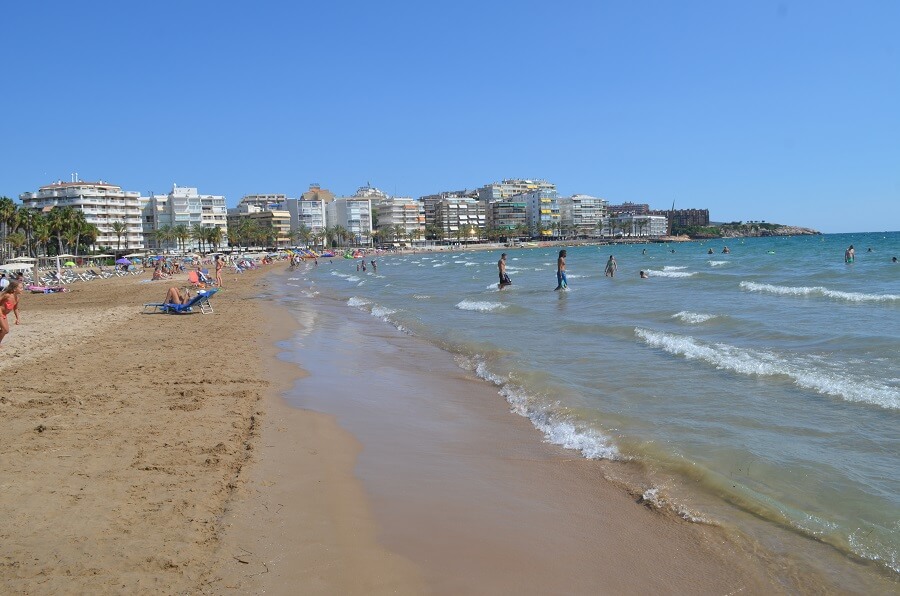 A Capellans beach It is the most beautiful city, there is no white sand, but the sea is very beautiful, the beach has mountains on both sides, it is a path that goes through all the beaches in the center of Salou. 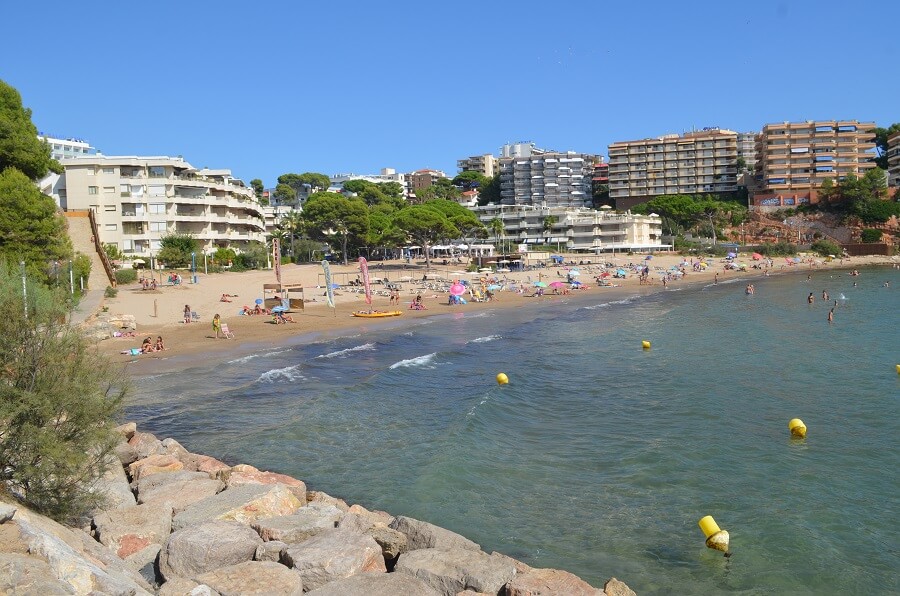 Llenguadets beach a small cove, between the Beaches of Llevant and Larga. 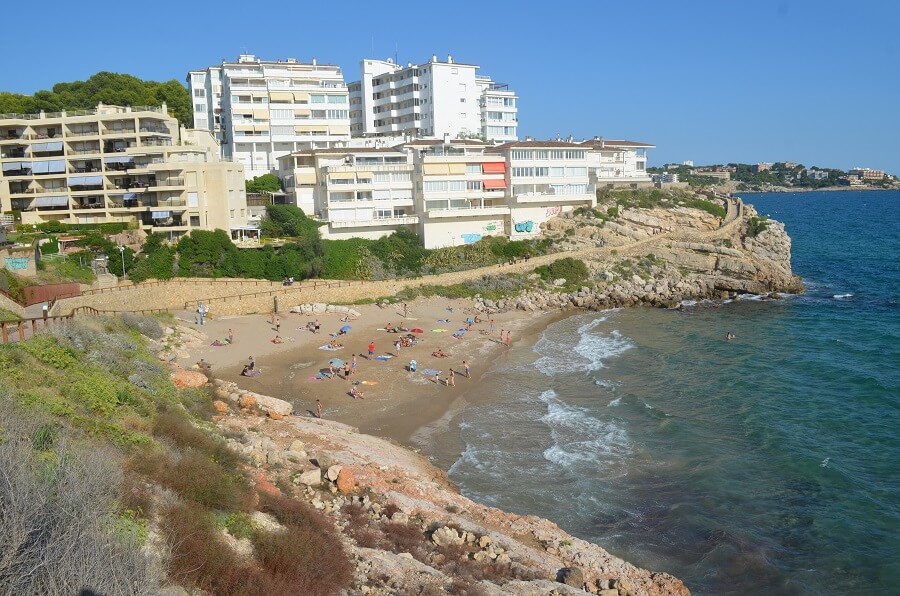 We had dinner by the sea at Rock & Grill in this city there are several bars that sell liters of drink, very typical of beaches that tourists from northern Europe come to the parties in Spain, Lloret de Mar is a city very famous for these liter drinks too, there we eat a pizza and order a beer from 3 liters, that doesn't heat up because it has a special container for it.

3first day
On the 3rd day we took the car to go to more distant beaches, we went to meet the Cala Font. 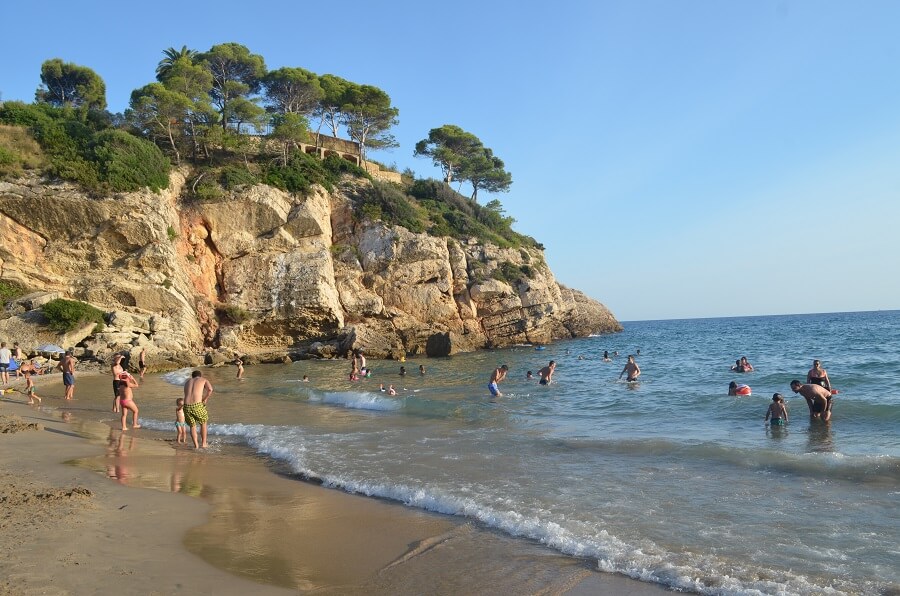 A Cala Crancs beach, is the most beautiful near the city of Salou is a very beautiful cove with finer sand and clear sea, surrounded by trees, because it's so beautiful, we stayed there all day, with our thermal backpack with drinks and food, very typical of people from Europe who always take plenty of food and drink to the beaches so they can stay all day. 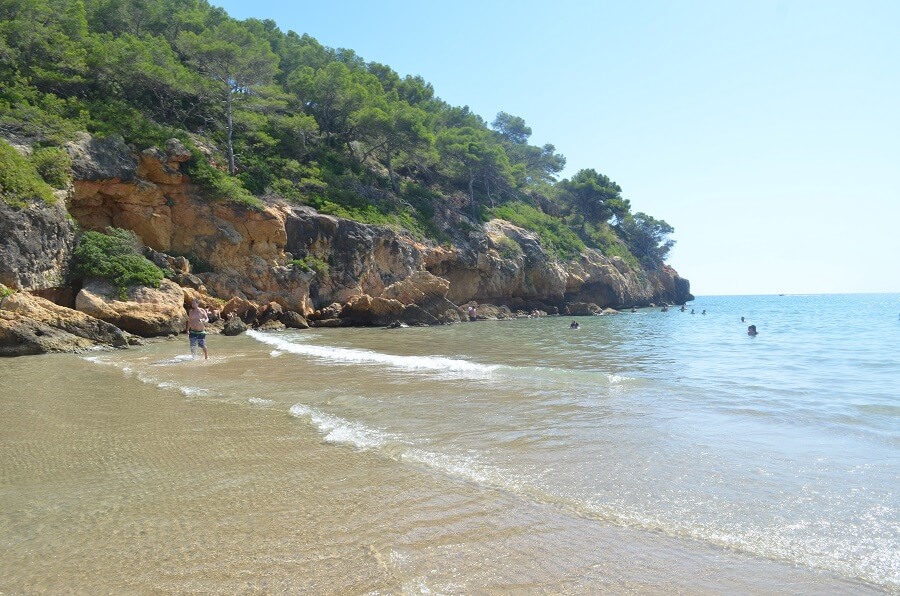 Even though the hotel had a kitchen and as we had taken food to the beach at night, we went to dinner at the restaurant Dong Fang Wok, which is a free Asian food buffet, mainly Japanese and Chinese, these types of restaurants here are very cheap and you eat a lot, on average between 12 a 15 EUR per person.

as discussed, on the beach in the center of Salou there are several pretty kiosks with very cheap drinks, I turn to 9,50 euros a liter of bloodletting, after dinner we stayed in one of them.

4first day
Sunday, the day to leave the hotel early and start the journey back to Barcelona, but as always we like to make the most of our travels., We went to Praia de la Mora in the city of La Mora, a very long and normal beach the beautiful beach in this part is the Cala Jovera, that we had already gone on another trip to Tarragona. 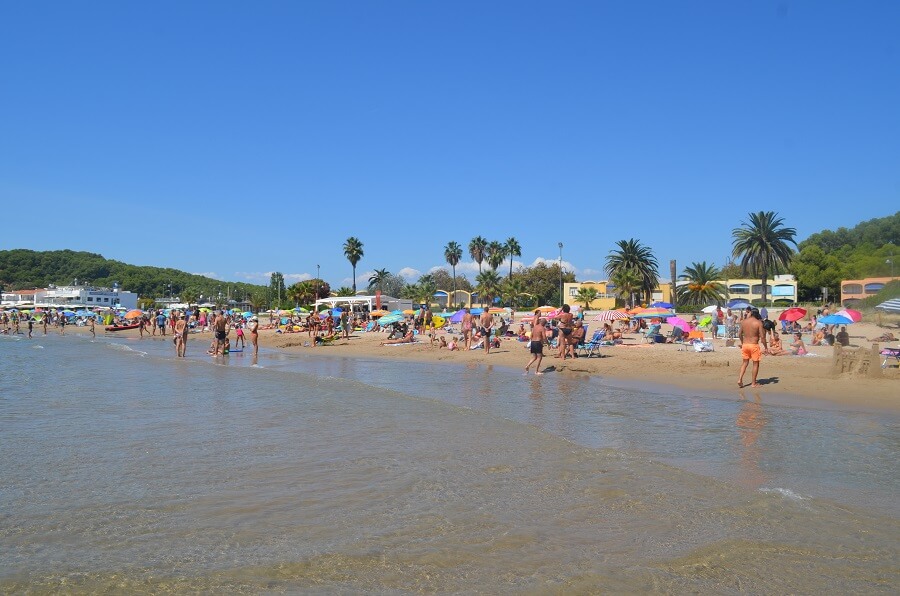 This was our first trip to Salou, but a year later we returned with our Spanish friends-brothers Javi and Raul to spend a weekend taking advantage of the fact that Javi got a discount to stay at the Sol Costa Daurada hotel, great hotel and even more with half board, on this second trip we did almost the same things as the first, but we stayed a lot at the hotel pool.

We were neither the first nor the second time in the main attraction of the city, the PortAventura World park, speak very highly of this amusement park, where there is even the Ferrari park with one of the fastest roller coasters in the world, same or from Abu Dhabi, one day we intend to go there, park tickets can be purchased no Ticket Bar. And these are the attractions it has what to do in salou.

See our tips in the post we wrote above with details

He feels like traveling after so many tips? The Blog TurMundial gives you even more tips to ease your travels: Want to book a hotel? Book hotels with great prices by Booking. Want to book an apartment, home, boat or even a tree house and still win 100 real in his first stay? Book all these and many other choices of places with great prices by Airbnb. Want to buy advance tickets for various attractions and tours without those huge queues? Buy Ticketbar Want to rent a car? Undoubtedly indicate the Rentcars.com it seeks the best cars and market values. You need to send or receive money to / from abroad, without paying those absurd charges of bank or exchange houses it Wise You want to avoid problems in the middle of his long-awaited trip? Hire a travel insurance with any of these companies Real Travel Insurance, or insurance Promo You want to avoid those sky-high mobile bills at the end of his international trip? And yet able to do, receive calls and use the internet? Buy an international phone chip with any of these companies: OMeuChip or with the or with the OBS: We emphasize that the responsibility for providing the services / sale and delivery of products, suppliers are described above.
CategoryEurope What to do in Spain?
TagsCala Font Catalonia golden coast Spain Cala Crancs beach Capellans beach Praia de la Mora Llenguadets beach Levante Beach Salou