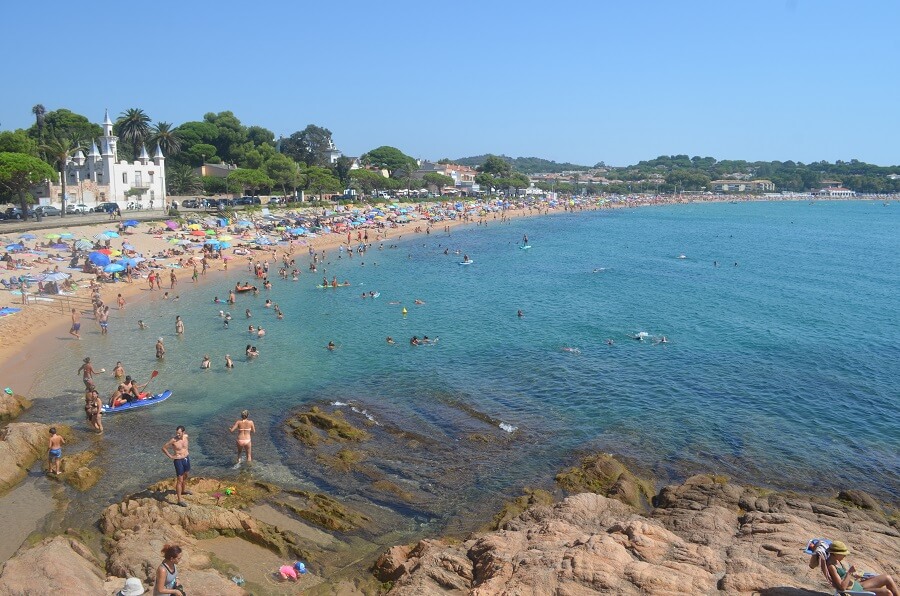 In this post we will tell what to do in Sant Feliu de Guixols, a town on the Costa Brava on the northern coast of Catalonia in Spain.

Costa Brava for those unfamiliar, it is the part of the northern coast of Catalonia that runs from the city of Blanes to the city of Cadaques already on the border of Spain with the France, is the part that has the most beautiful beaches in Catalonia.

The city of Sant Feliu de Guixols and its immediate surroundings constitute a corner of the region with its own personality.. Sant Feliu de Guixols is the natural capital of this small territory., also formed by the neighboring municipalities of Santa Cristina and Castell-Platja d'Aro, which with its landscapes and history add more elements of diversity to the region of Baix Empordà, and accentuate its plural and open aspect.

Located in the southern vertex of the region, in a small bay closed by two rocky points that form a natural harbor, Sant Feliu de Guixols seems to contemplate by far the most spectacular tourist and urban development in other coastal locations. In contrast to the urban explosion and with a certain improvisation in the birth and growth of other nuclei, Sant Feliu de Guixols presents a more balanced and orderly image, typical of a city that has already had significant growth, and quite harmonious, many years before the great economic development began in the seventies. 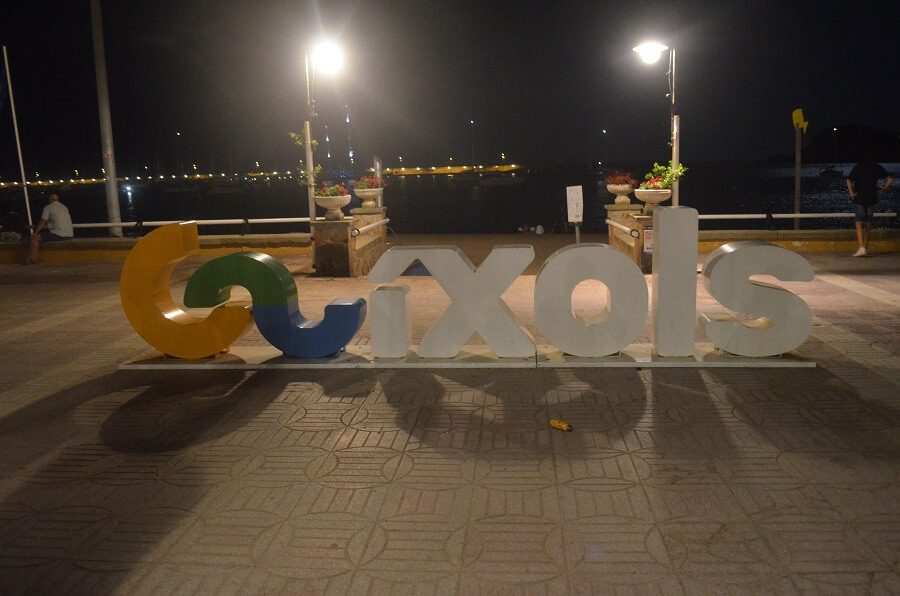 Visitors to this city are attracted, first of all, for its magnificent seaside promenade, an urban space that illustrates this way “different” of being that Sant Feliu brings to the region. Unlike the much more recent tours of the vast majority of coastal towns, this is a tour that began to be ordered in 1834, by planting the first two rows of trees, and that in 1884 it already had a chain of five lines and an appearance quite similar to what it presents today. The eastward extension of this first tour also dates back to the last century., known as Passeig de Guíxols. Both form a high quality set that has been the setting par excellence for moments of leisure and fun for many generations of Guixoles. “What would be Sant Feliu without its Paseo del Mar.?” The historian Lluís Esteve once wrote, summarizing with this sentence its importance and, at the same time, the justified pride that awakens in the children of this city.

What to do in Sant Feliu de Guixols?

We went there for a weekend in August, time of summer and vacation in Spain, as the city is not well known as other nearby cities like, Tossa de Mar, even at that time the city was quiet, only the beach of Sant Pol which is more crowded, otherwise everything is quiet to go to restaurants and beaches.

1DAY
We left by bus from Barcelona for Sant Feliu de Guixols, we pay 61,00 euros round trip the couple, the entire Costa Brava has no train stations, so you can only reach it by car or bus., but we barely arrived alive because the bus was without air conditioning at the beginning and everyone was dying of heat lol, luckily the driver stopped and restarted the system and the air came back on, but the Moventis bus company should inform all drivers that before passengers enter the air it should already be turned on, but finally we arrived at the end of the afternoon, the journey takes just 1h30.

The hotel we booked was Hostal Noray, very good, well clean, well located (is near the beach), the owners are friendly and let you store our bags when we checked out of the hotel and went to the beach for the day, we take it at the end of the day to go to the bus station, which is also very close. Between the bus station and the hotel, we didn't even expect and out of nowhere we found a Gate of a 10th century monastery, super cute.

O Benedictine monastery of Sant Feliu de Guíxols it was founded in the first half of the 10th century and built on Roman remains that are still visible in some places.. 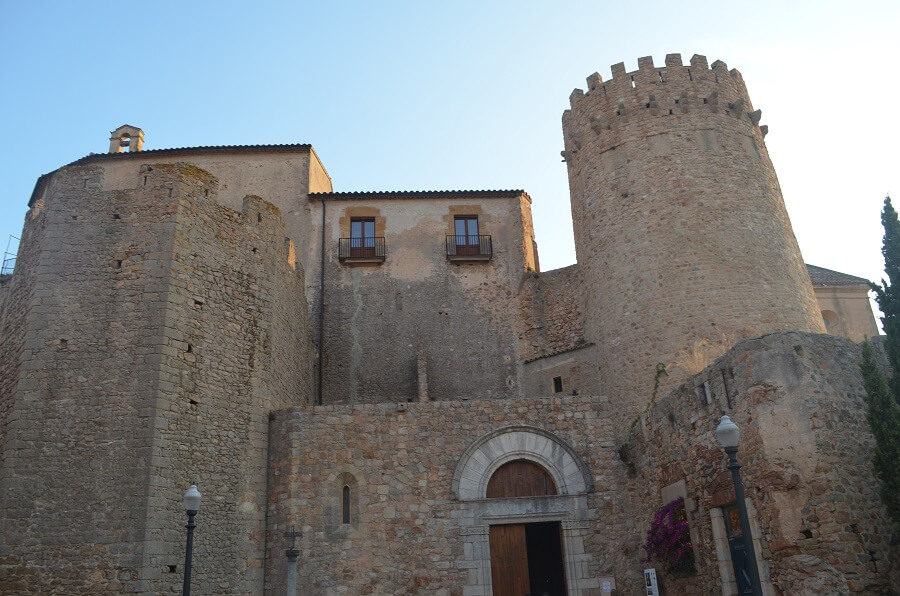 With regard to the church, there was a first fortified – with wall, towers and moat – which was destroyed during a Saracen attack on 965. The temple was rebuilt and a Romanesque-style church was built between two pre-existing towers.. However, a new attack, this time from the French in 1285, again caused extensive damage to the building, that had to be restored again. Already in 1317 the temple was modified again, this time with the objective of renewing and expanding the church, which gave it much of the look we can see today.

This façade is the only vestige of a pre-Romanesque building that could have been the palace of an abbot or a Carolingian governor.. It is divided into three levels.: a gallery of horseshoe arches on columns, a first floor with triple openings also with horseshoe arches and, finally, a Lombard style blind arched cornice. Your name, apparently, doesn't come from the horseshoe shape of their bows, but of an old door equipped with a spectacular bolt.

O Arch of St. Benedict (Gate of Sant Benet) now preserved as an isolated door in the middle of an esplanade, it was then the main access door to the monastery.. It is baroque in style and dates from the 18th century. 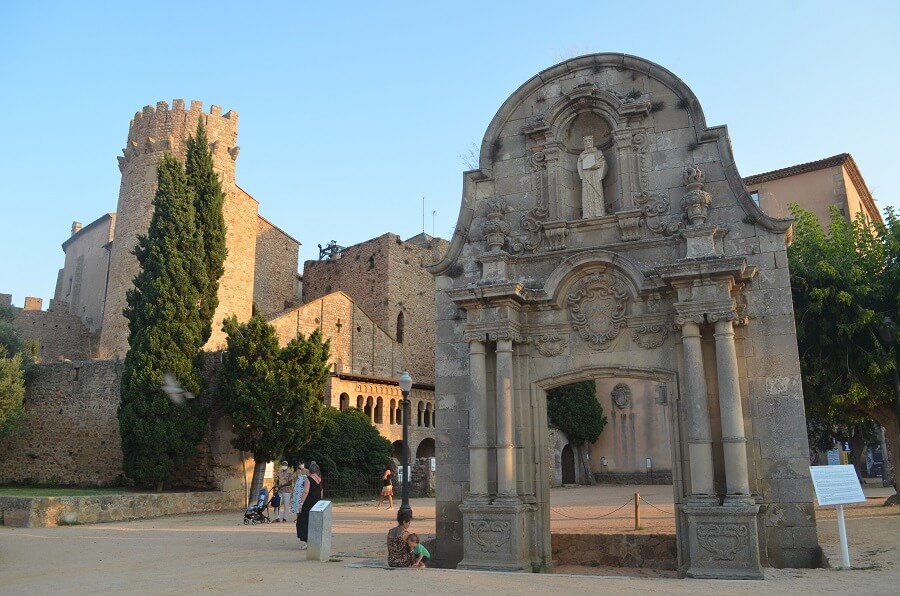 The gate is divided into two floors.. The first consists of a carpanel arch flanked by pairs of Ionic capital columns. These columns rise on a plinth and support an irregular entablature that opens in the center to frame a shield.. No second walk, flaming vases in the entablature complete the columns and flank a central niche.

As summer time in Spain the sun goes until more than 9 pm there was time to go to the beach in the center, despite the cloudy weather, we do not La Muralla restaurant Cafeteria Granja Honduras food, taco and quesadillas by 25 euros more drinks, good food and fair price.

2DAY
As always on trips to the beach, we try to save money by buying lunch and drinks at the supermarket to take to the beach in a thermal backpack, so we spend the whole day, very normal thing in Europe, the european does it normally and we love it.

After passing the supermarket we walked 2 km from the hotel to In Caleta, a beach that is out of the center, we stopped first at Sa Caleta, a rocky cove beside the beach of Saint Pol. 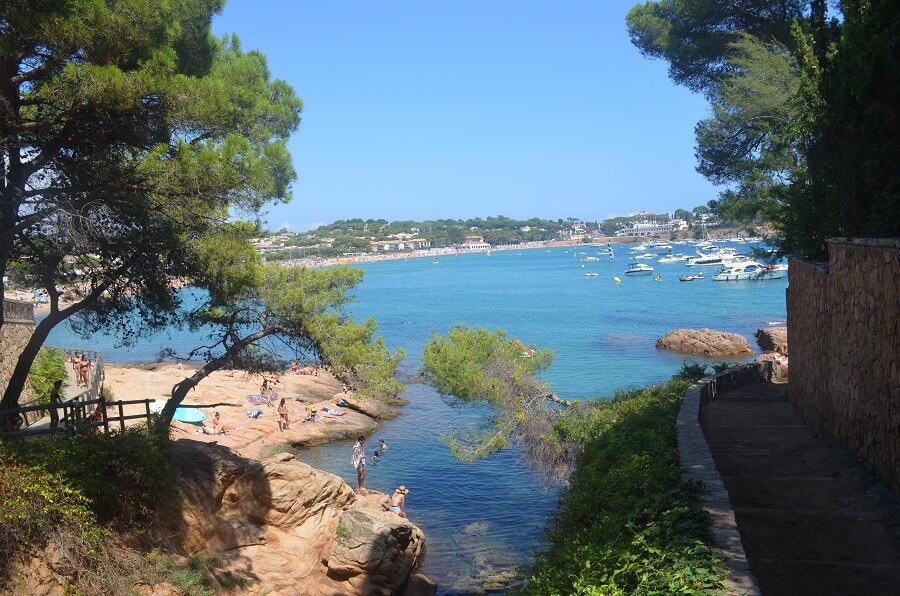 A Sant Pol beach is beautiful, the most beautiful in the city and wide, there is sand with very fine stones, the sand is not fine like other beaches but it is very beautiful, we spent the day there. 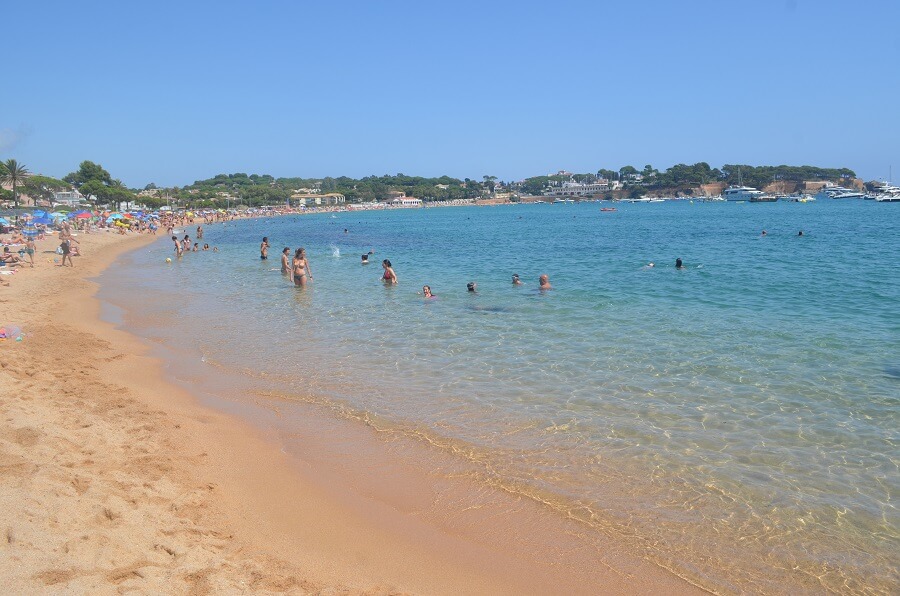 There's a house there that looks like a mini palace, built in 1890 and which is called the house of Les Punxes, Punxes in Catalan means point and each end of this point represents each son of the house builder Pere Martir Estrada, is a cultural asset of local interest and we didn't even know it existed, it was also a surprise when we got there.

To return to the hotel, we took a trail between Sant Pol and Sant Feliu, passing through Sa Caleta, Cala Maset, Cala Peix, Cala L’Ametler e Cala Jonca all these pants don't have a beach to sunbathe, he can only sunbathe on the rocks of the mountain and at the end of the trail we arrive at the Port of Sant Feliu, where do we stay to see the end of the afternoon.

We had dinner next to the hotel, at the Gran Muralla Restaurant very good and very cheap Chinese food, we pay 13,05 euros the couple, with drinks and we ate very well. 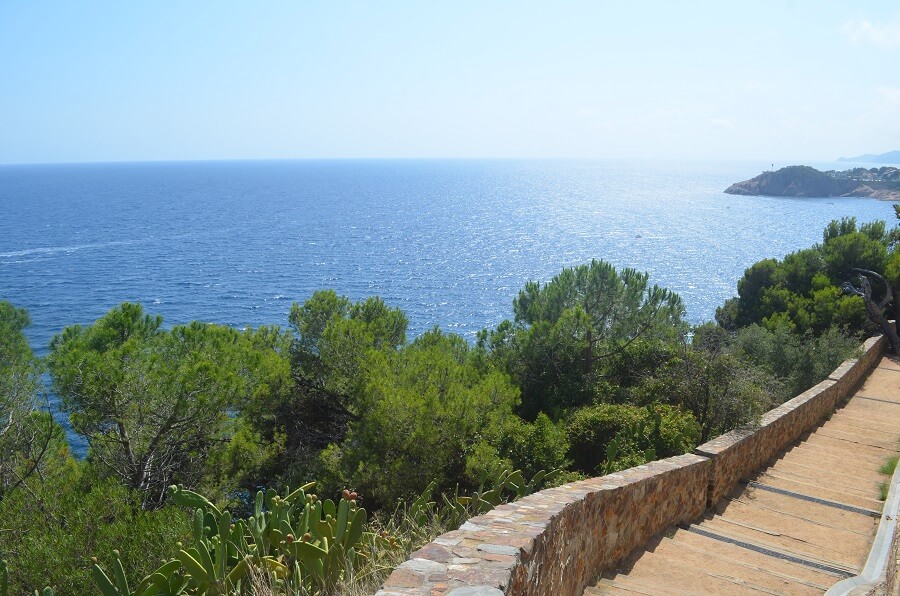 After dinner we went for a drink at the beach kiosk in the La Barraca del Mar, we enjoy the view of the sea with the full moon and at night there is a DJ playing a cool sound, the only bad thing is that they charged us 5 euros more with the excuse that the wine we had was different from what we had asked for, a tip confirm the name of the wine when the bottle arrives on the table.

3first day
We took a walk to reach Cala del Vigatà, not worth it, a super steep cliff to go down to the beach that is not so pretty. 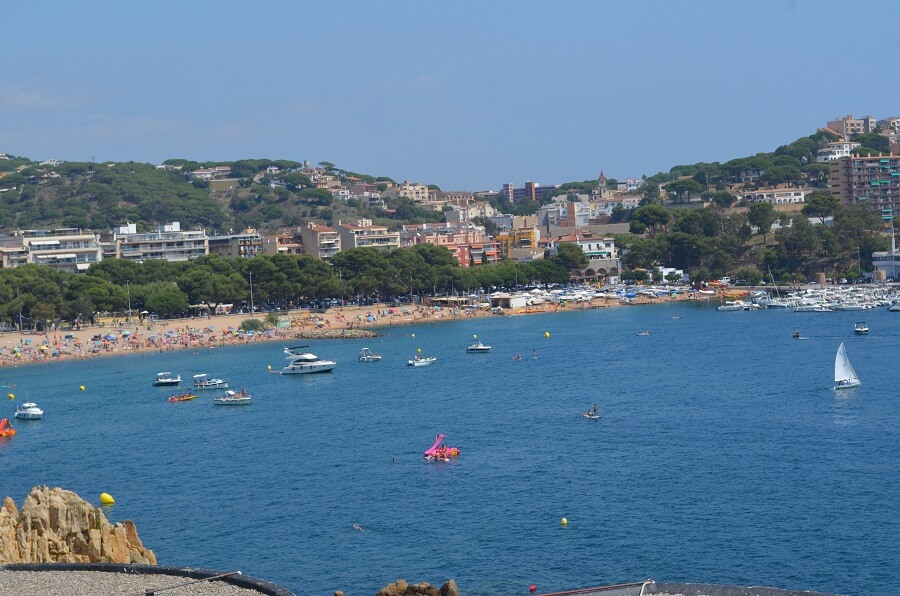 With that we return to the beach of Sant Feliu de Guixols, the city center beach, to stay close to the bus station that in the late afternoon we had our bus back to Barcelona, and again we had a problem on the bus, on the way, he had to change drivers because the one he was driving had already reached the limit of hours worked., a bad management of the Moventis company, but overall it was all right and we delayed some 30 minutes. 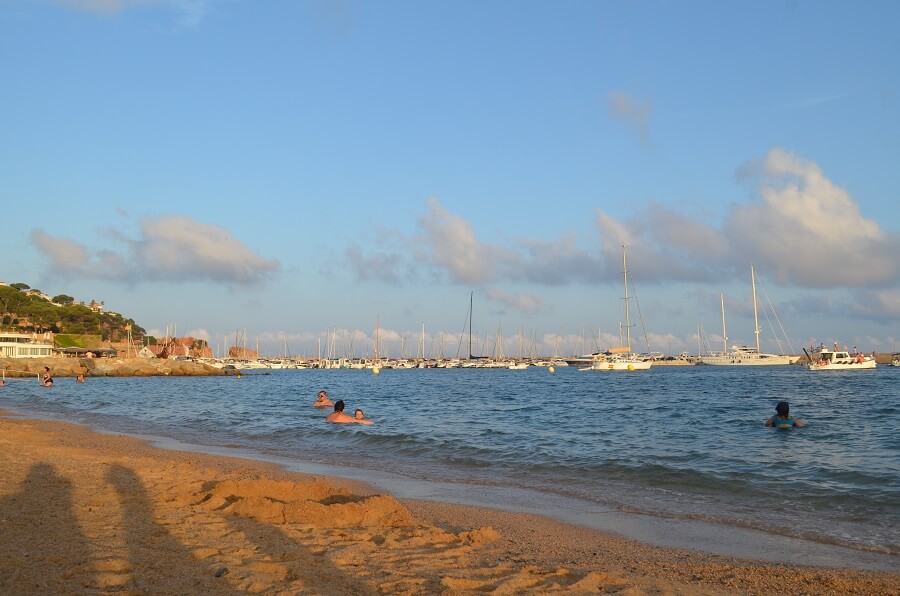 These are the tips to do in Sant Feliu de Guixols, we hope you enjoy.

CategoryEurope What to do in Spain?