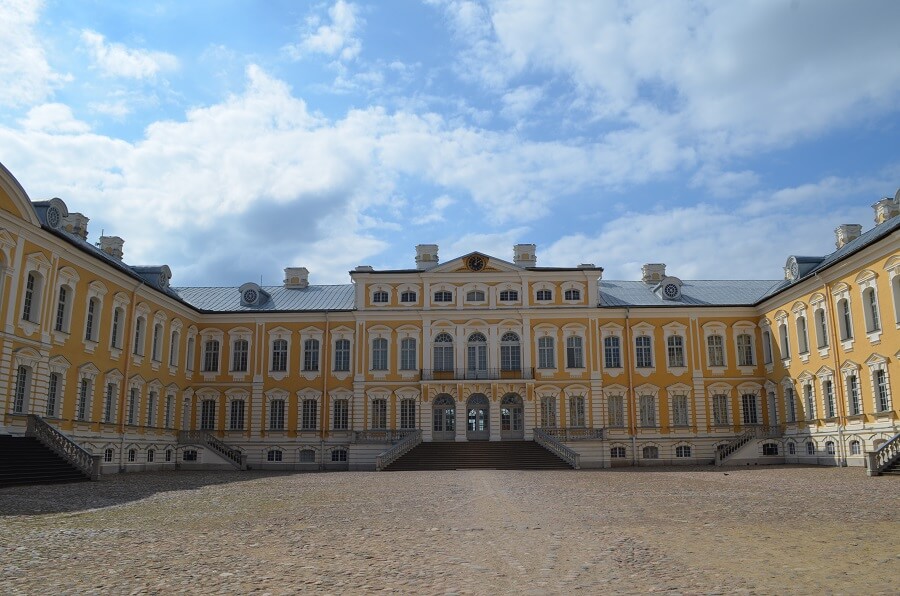 O Palace Rundale It is in the south near the border with Lithuania and only 80km away from the capital of Latvia, Riga, it is an attraction to know both who is in Lithuania and in Latvia, many people do one bounces back from Riga to the palace, we have included because it was on the way from Vilnius, capital of Lithuania and, Riga, among other cities that we know in our roadmap for the Baltic countries. 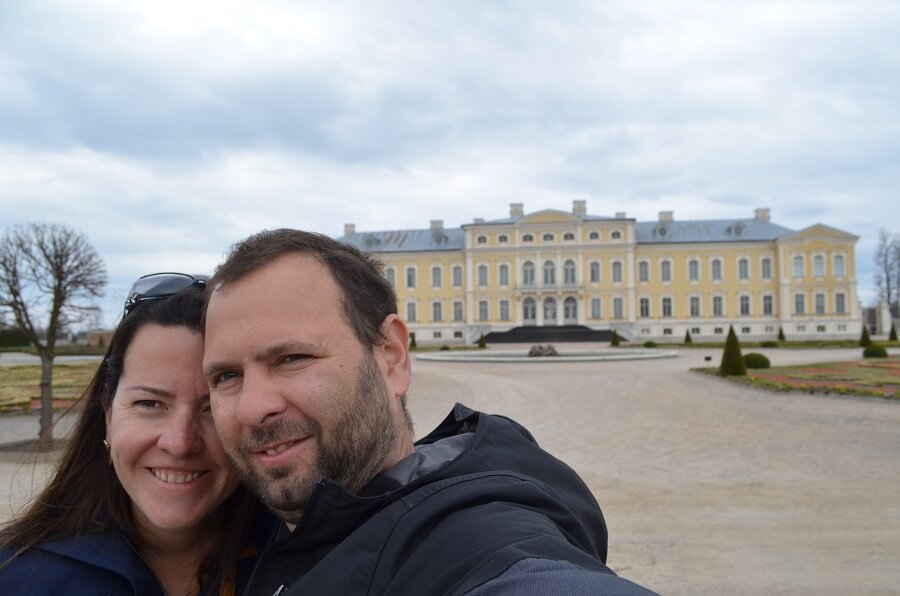 Rundale It was built in the eighteenth century as a summer residence of the Duke of Courland, between rooms, rooms and other rooms, the palace has 138 divisions divided into two floors.

The architect who designed Rundale also designed other palaces in Saint Petersburg, the winter and summer palaces, who also visited when we know the city. 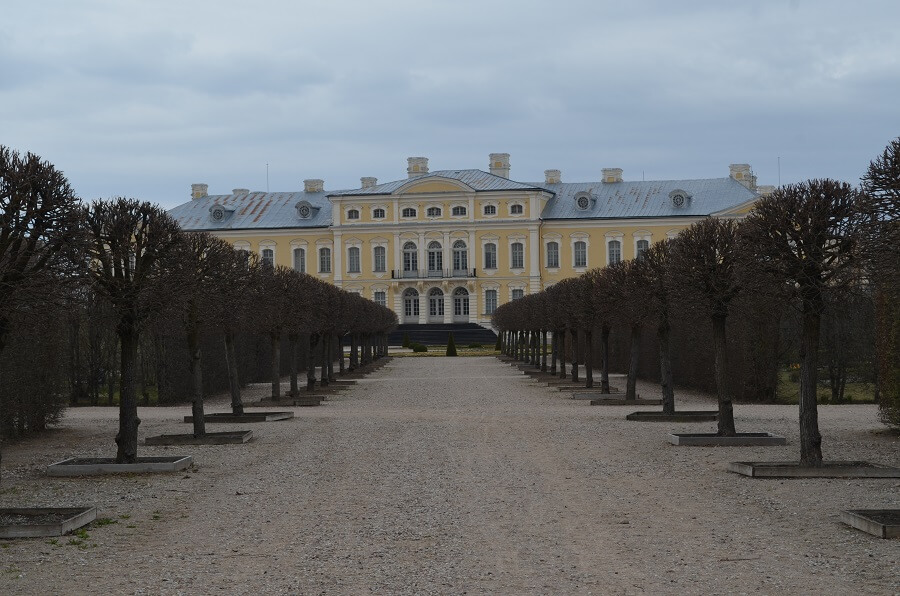 Rundale Palace is one of the great treasures of Latvia, an impressive masterpiece of baroque architecture that should be visited. Every step we take in this palace, you can enjoy your works, luxurious, and the history that its walls have, really beautiful, often we find castles and most beautiful palaces outside than inside, but the Rundale impressed us inside in such detail.

Rundale is, today, a museum that you can visit, You have to pay to get, but it is very cheap compared to other European palaces, the luxury of the Dukes of Courland is impressive. Its endless galleries are full of authentic works of art. Each room is a new world, with very different colors and environments of each other, all are in the style of centuries ago. 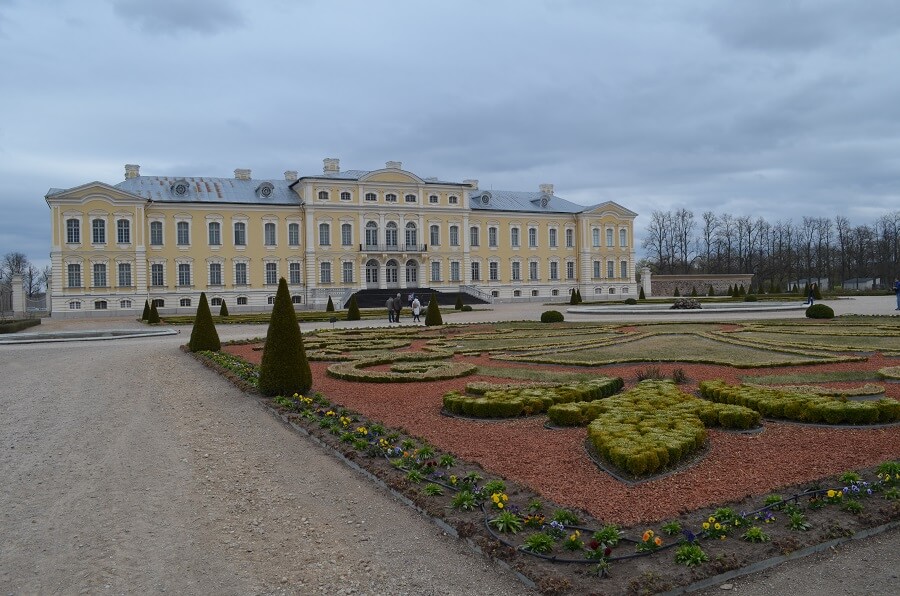 A Golden hall one of the most important, you can see what the Duke's throne room. We were blown away with the gilded stucco ornaments that gave the room its name and the spectacular and colorful frescoes that adorn the ceiling. Also in the magnificent hall you will find, in contrast, a Porcelain room, a small closet where you will find exquisite pieces of oriental porcelain, a luxury for the time. 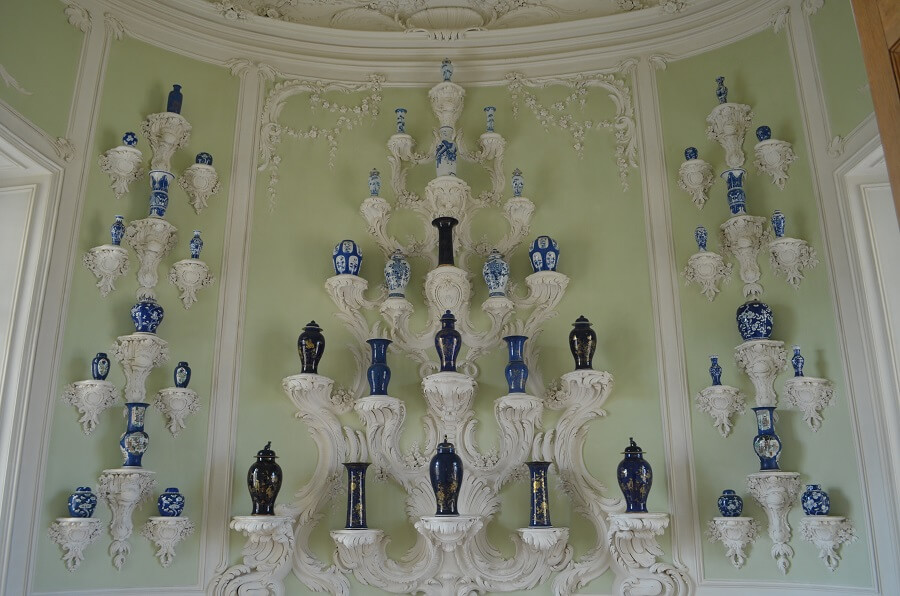 In the private rooms of Duke, you can enjoy the Dutch Room, so named because it is decorated with works of important Dutch artists, among which stands Rembrandt. You can also see Hall of Governors, full of paintings depicting the ancient Dukes of Courland. 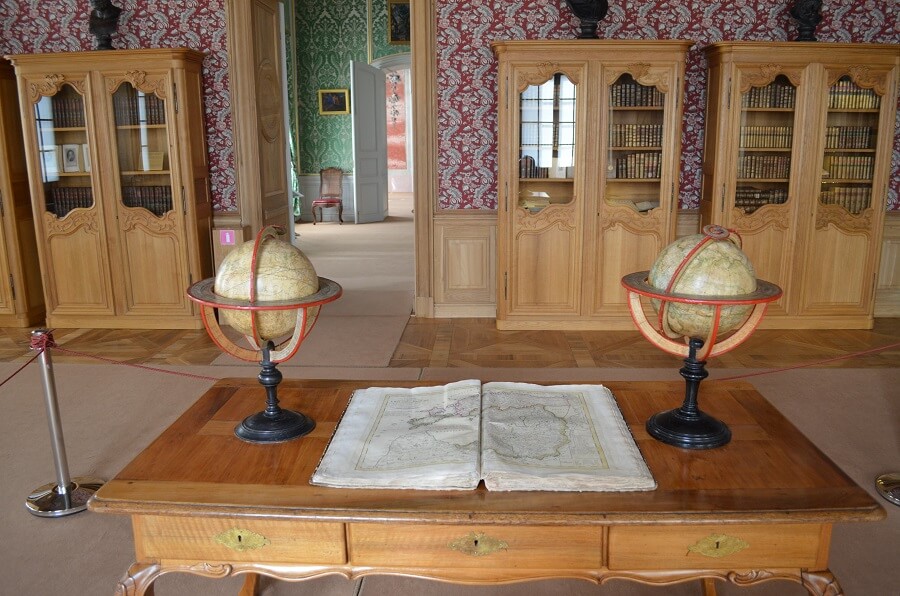 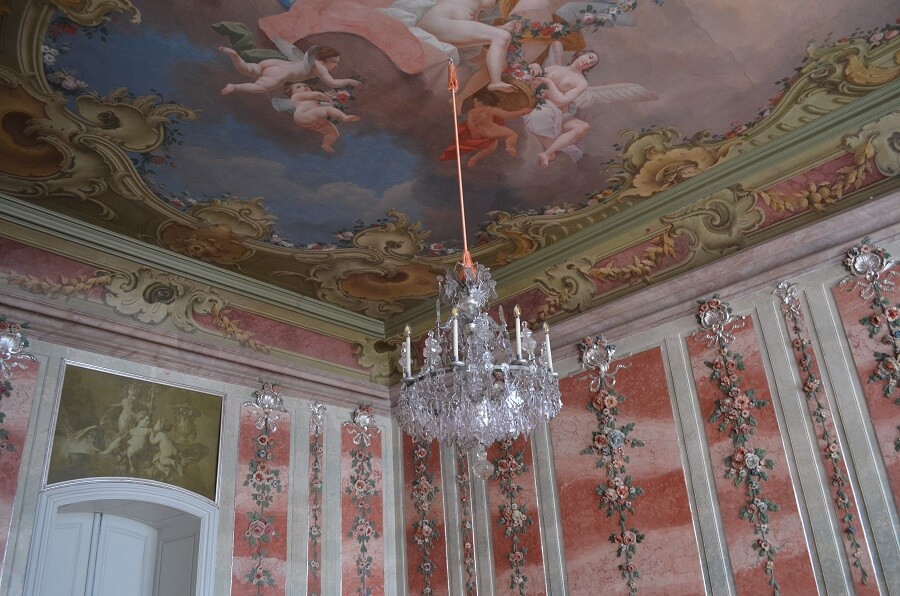 The Gardens Rundale Palace are beautiful, they compare to Versailles, but Versailles is larger and more beautiful we, others we know in Austria as the Sissi, shame that when we were there was early spring and the flowers and leaves were still rising, why a good time to go is closer to the summer between June and July, strolling around this huge park, designed as we speak in Versailles style. Garden is the main place to see the facade of the palace, a marvel of Baroque art in the Baltic.

Like the rest of the palace, palace grounds are also designed in various environments, as you pass by them. So, do not miss the symmetric audience, the rose garden and even a theater made with grass terraces where the Duke and his entourage could enjoy the functions organized for your entertainment. 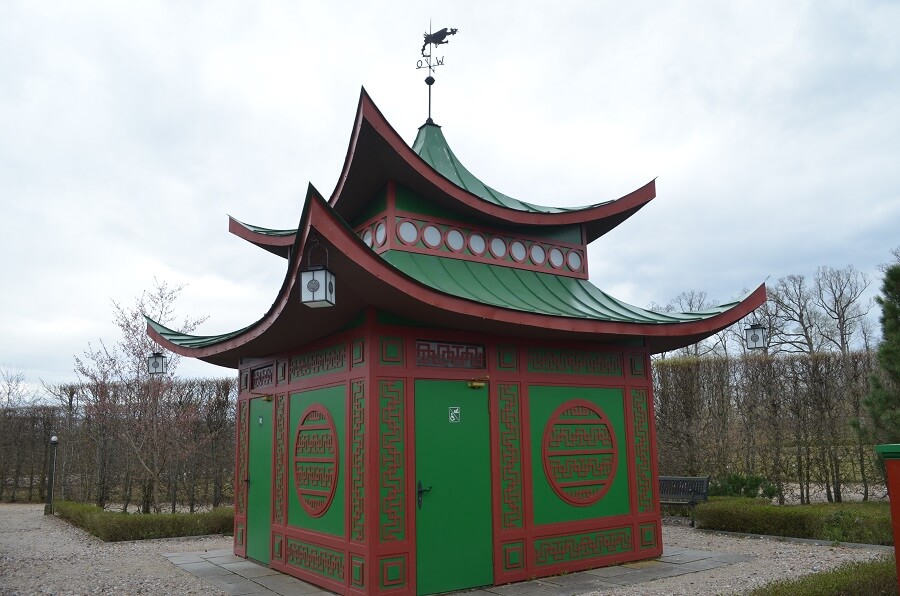 Just a few decades after the construction of this gigantic palace, the area was conquered by the Russian Empire that began to control this spectacular mansion. Catarina, the Great granted the Duchy of Courland and the palace to the Zubov family, one of the most important of the Russian aristocracy of the time, were responsible, not only to preserve this spectacular Palace. 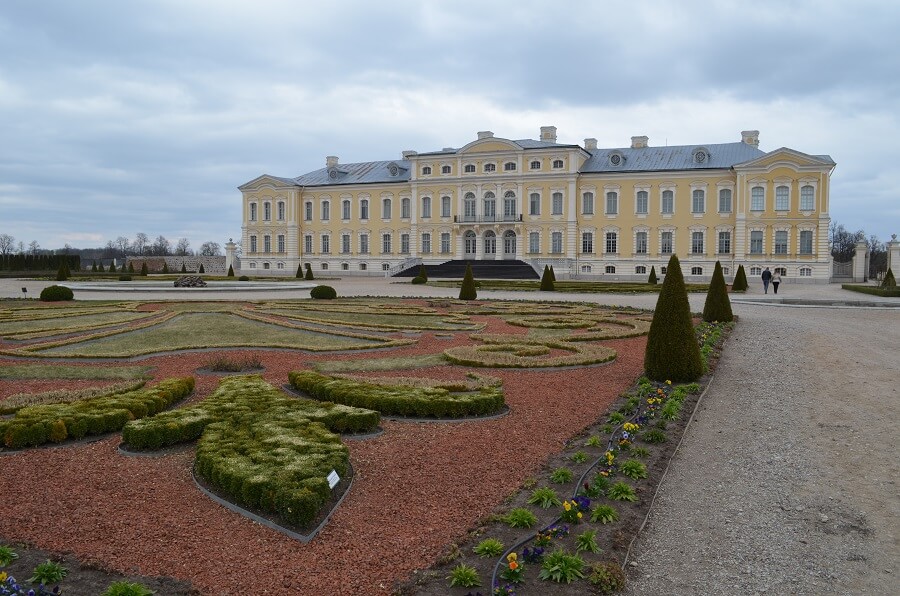 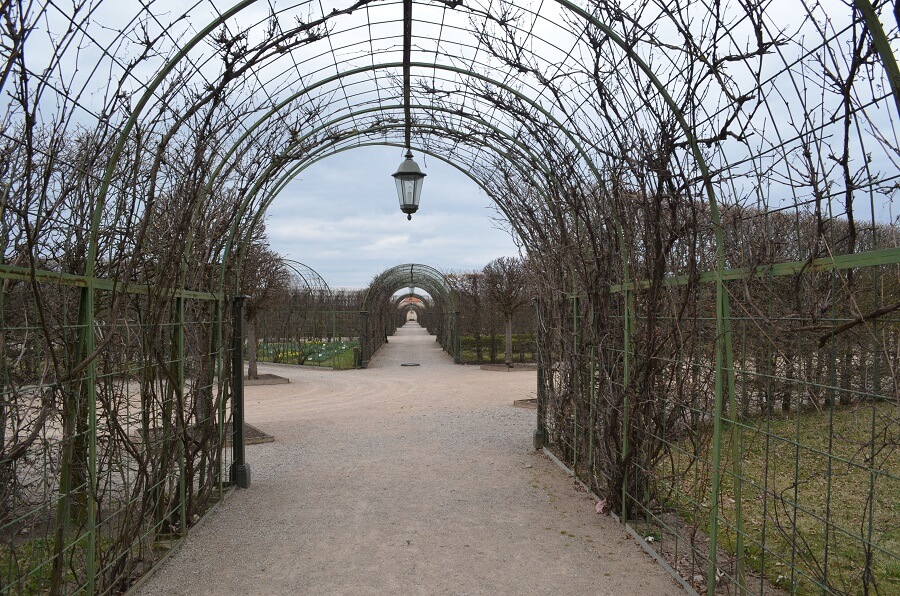 We stayed at the Palace of Rundale, by a 2 and a half hours, enough time to see everything, as we speak, We were coming from Vilnius, Lithuania, where we stayed 2 days, then we met at the Day 3 Trakai Castle, the cities of Kaunas and the city of Siauliai, where we stayed, on Day 4 were on the hill of crosses all still in Lithuania, after we got Rundale, later in the day we went to Riga, and still others went for days Estonia, all this adventure in total were 10 days we will tell in detail here on the blog.

The visit to the palace did in the morning, we left it at lunch, Palace side where we left the car has a restaurant, but we do not think so cool, are we in a city next to call Bauska very important in the history of Latvia, and there eat at the restaurant Tornis, We eat dishes of Latvia, one breaded pork tenderloin with delicious cheese sauce and, very cheap a dish for two with drinks came out 17 euros, half the price we usually spend in Spain or other European countries in the West.

He feels like traveling after so many tips? The Blog TurMundial gives you even more tips to ease your travels: Want to book a hotel? Book hotels with great prices by Booking. Want to book an apartment, home, boat or even a tree house and still win 100 real in his first stay? Book all these and many other choices of places with great prices by Airbnb. Want to buy advance tickets for various attractions and tours without those huge queues? Buy Ticketbar Want to rent a car? Undoubtedly indicate the Rentcars.com it seeks the best cars and market values. You need to send or receive money to / from abroad, without paying those absurd charges of bank or exchange houses it Wise You want to avoid problems in the middle of his long-awaited trip? Hire a travel insurance with any of these companies Real Travel Insurance, or insurance Promo You want to avoid those sky-high mobile bills at the end of his international trip? And yet able to do, receive calls and use the internet? Buy an international phone chip with any of these companies: OMeuChip OBS: We emphasize that the responsibility for providing the services / sale and delivery of products, suppliers are described above.
CategoryEurope What to do in Latvia?
Tagsdestination RBBV Latvia Baltic countries Palace Rundale Riga Rundale Rundale Castle Versailles Baltic

Things to Do in Kaunas, second largest city in Lithuania