Ride that goes around all over Sal, in Cape Verde, in Africa

Sal Island It is one of the islands that make up the country of Cape Verde, in Africa, that is between Brazil and in front of African countries, as Mauritania and Senegal, we 8 days there and one of the coolest attractions to do is stroll strolling across Sal.

This tour we did with the company wait; which specializes in tours / excursions on the island of Sal and Boa Vista Island, one of the tours they sell is the return of the island to know all the attractions of this paradise.

The tour includes transfer from hotel, they spent in our hotel very early, we went on a tour that lasted the whole day we left the 8:30Morning h and returned 16h, Included is a wonderful breakfast with the main dish Cachupa, a type of feijoada we explain below what goes on the plate, Besides 1 drink included. Are 10 stops at tourist attractions in Sal Island that we also have below a little about each. 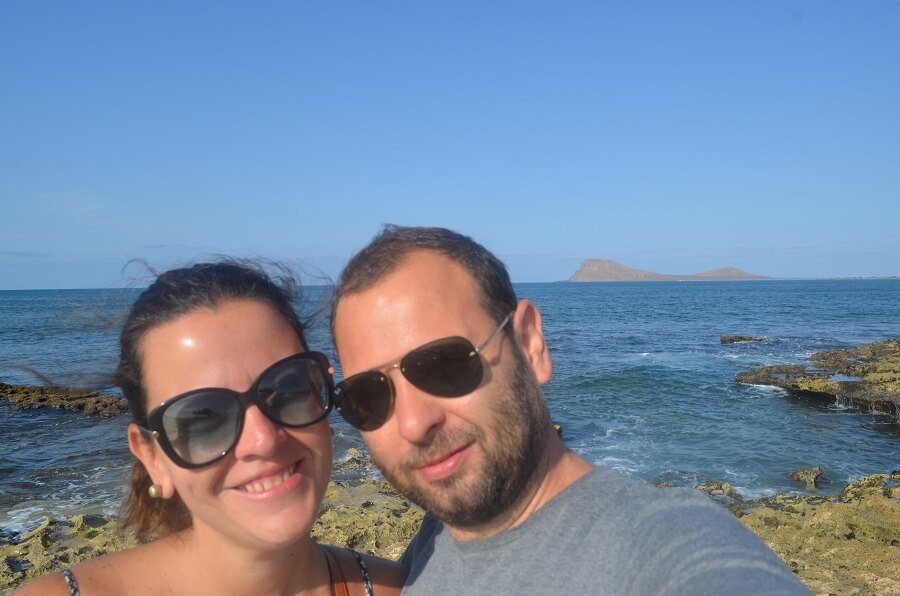 As always we plan our trips in advance, We reserve the tour with Morabitur through site their.

For those who do not know the Sal Island in Cape Verde, the island is a haven of beautiful beaches, where many Europeans go to get away a little from the cold and many couples go there to spend the honeymoon, the people are very happy, smiling and friendly, as was our guide, for us it was even cooler because it was the first tour we did outside Brazil with a guide who speaks Portuguese. Cape Verde was a Portuguese colony and also the official language is Portuguese, but in addition they also speak Portuguese Creole.

Walk around Sal, in Cape Verde, in Africa, com wait;

The first stop of the tour Sal, was in Beach Murdeira a white sandy cove with a sea beautiful blue, where turtles lay their eggs, in the city of Murdeira has several summer houses of European, as well as stay in a beautiful place, the houses there according to our guide, worth around 55 a thousand euros, a price quite cheap for Europeans, especially those in the north. 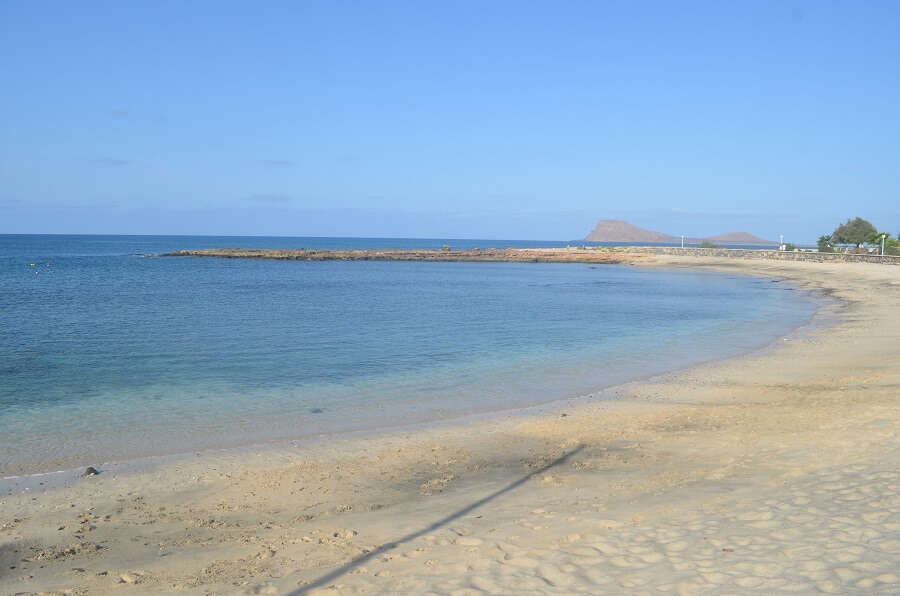 In Murdeira we soon, only to know the beach and stroll through the rocks, from there you have a view of the mountain that has shaped what they say take the form of a Lion, we saw the beautiful lot, with the blue sky that was, but we can not see the lion lol.

asparagus Our second stop was the capital of Sal Island, where is the Amilcar Cabral International Airport, where we arrived with our flight from Lisbon, Sal Island, has no direct flight to Barcelona, where we live. 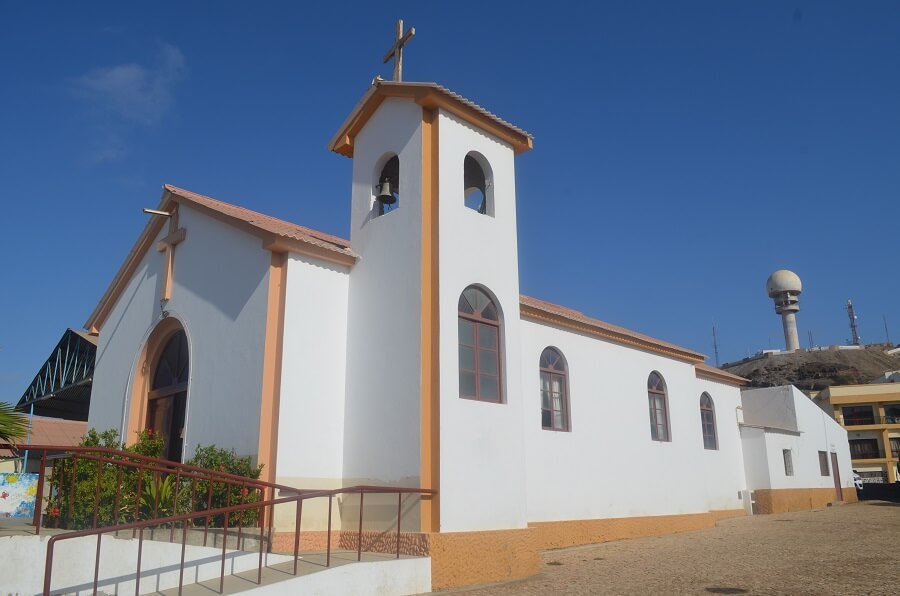 Asparagus strolled in the city, We know one of the churches, and we went into a souvenir shop to see the typical products of Cape Verde, which has a tasting of alcoholic drinks typical of them, which also sell the Cape Verde coffee is considered the 4th best in the world.

The drink I took them, or grogue, It was very strong, Pri took a very tasty coconut liqueur. 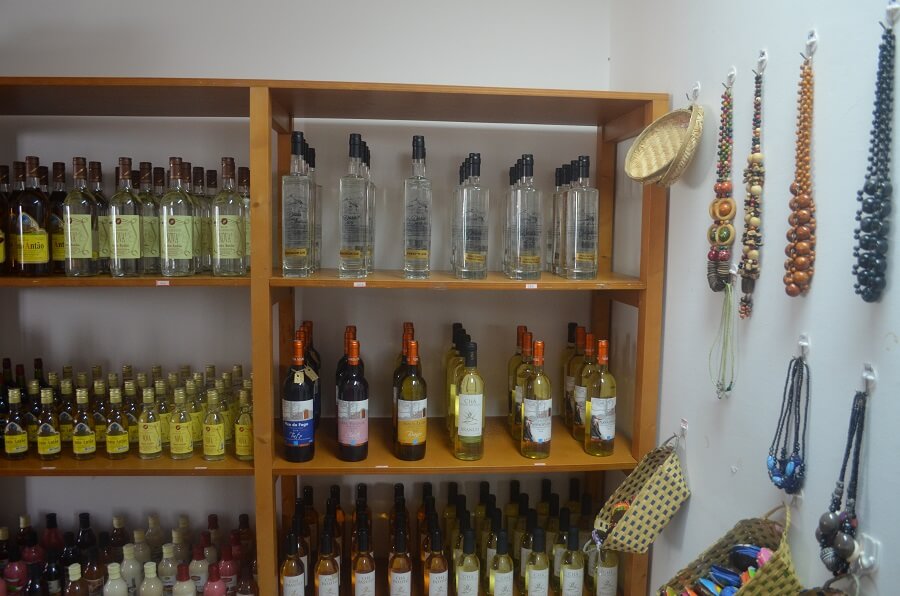 Palm tree, It is the industrial area of ​​the Island, where is the Palm Harbor where arriving boats to supply the products Island, there are produced few products because the island has an arid climate. 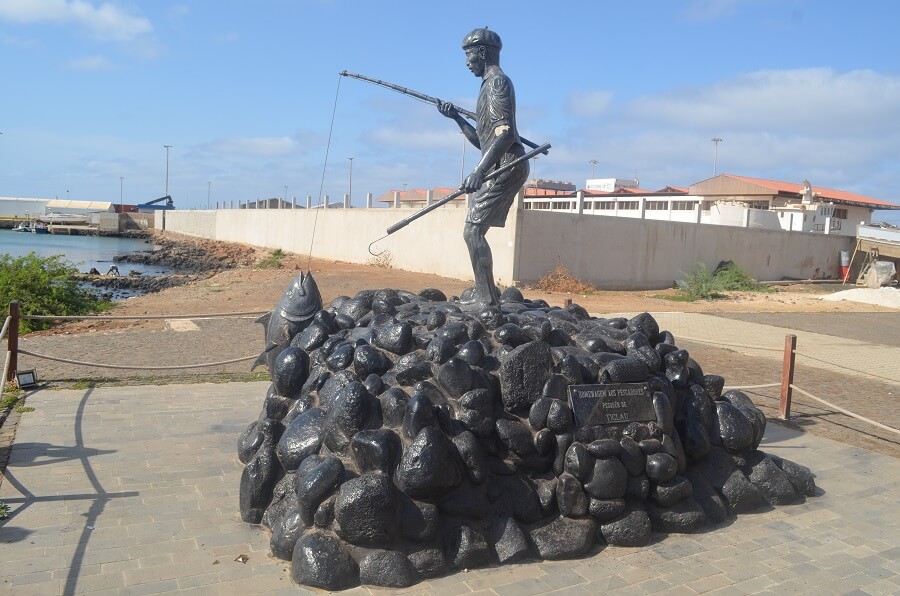 In this port we visited out the boats that go to the other islands that make up the country, in total are 10 Islands, being 9 inhabited.

In the port has a statue of a tuna fisherman, who taught the locals how to catch the fish.

Buracona and the Blue Eye, They are ride attractions that are paid to part, but it costs only 3 EUR per person.

O Blue eye It is considered one of the most beautiful tourist attractions of the island, a hole in the rock, with view to a full underground cave water, that depending on the sun, is a blue eye in the reflection of água.Nós not had so much luck and we can not see, but the surrounding Blue Eye is very beautiful and super worth even not seeing eye, you can also dive in the cave. 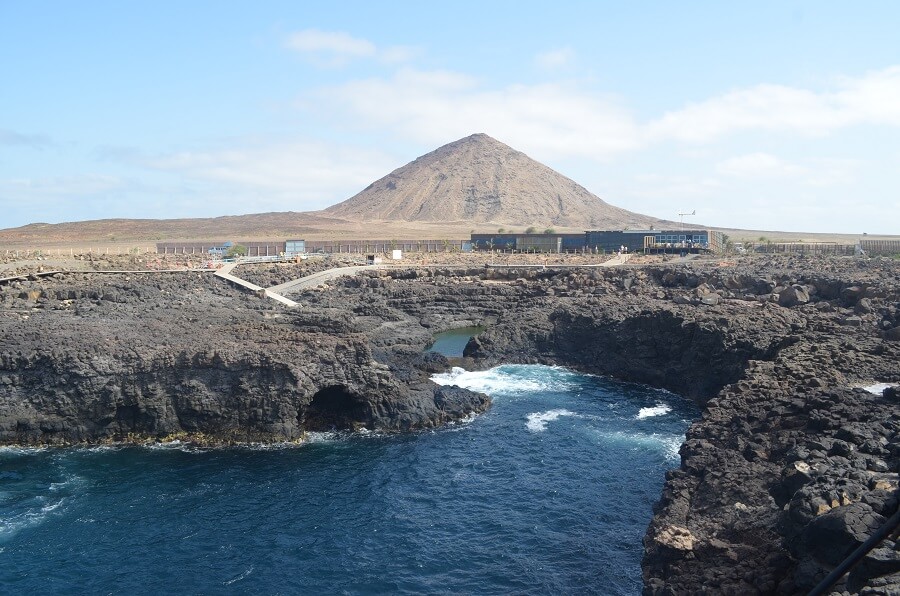 Also in Buracona you have time to swim in a beautiful natural pool, We love the place. 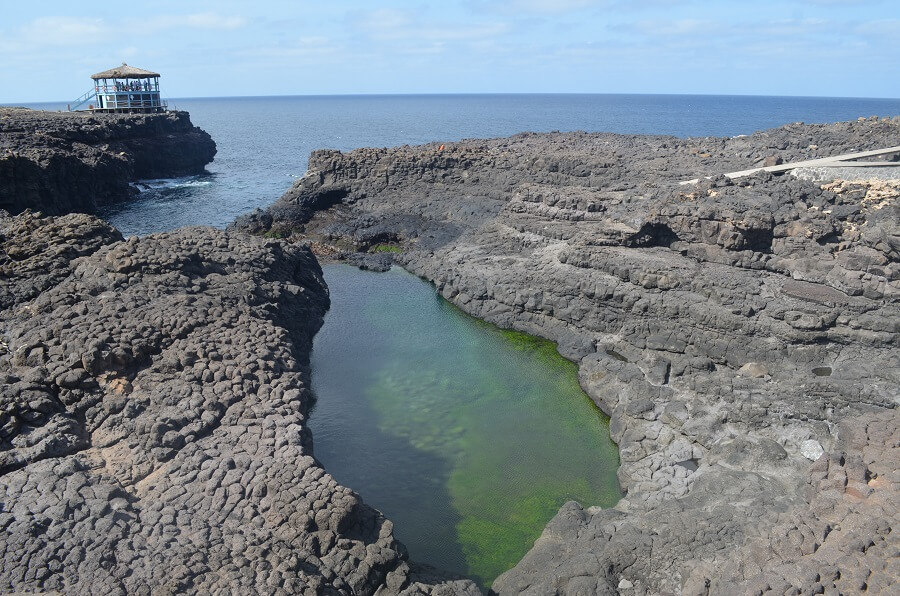 Mirages in the desert of Sal Island

Before stopping for lunch we stopped at a point desert of Sal Island, that the heat that is produced we see miragens ever heard in movies, a beautiful and different scenario, where we can see water in the desert, without having any water that way. We had seen mirages on a journey through the Desert Tunisia, the photos were not as sharp as we have seen live. 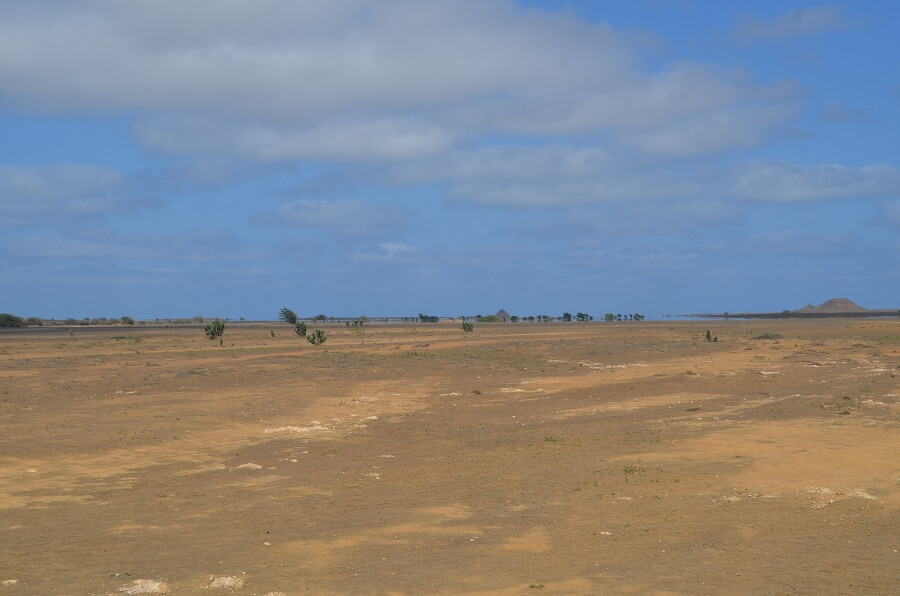 Through Asparagus has a Village with local people, those that really show as are some parts of Africa, Cape Verde is one of the most developed countries of the African continent, yet still have a large part of the population living in extreme poverty. In this village the houses are extremely simple, they have no running water and energy they are generated by generators that only last from 19h to midnight and have to pay around 25 euros. 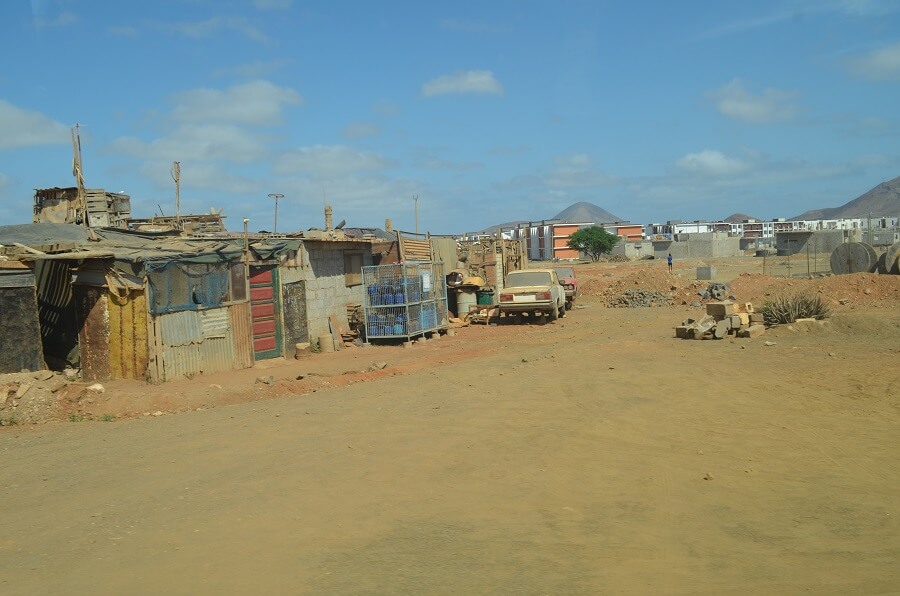 We do not remember the name of the restaurant we stopped, it is between asparagus and Shark Bay, the restaurant is self-service buffet, which is included in the price of the tour wait;, for the first time experience the famous Cape Verde food, a cachupa, which somewhat resembles the Brazilian feijoada, the Cachupa is made with various types of beans, corn, pork and beef or fish, addition chickpea, potatoes and other vegetables is a delicious traditional food, love.

Another strong point of the tour is the Bay Sharks, where we entered the water up to their knees in order to see the lemon shark pups go well near our feet, what an amazing experience, We had never thinking about life in terms a shark with a 60 cm around us, before we get to this place, we think, do they really have these sharks? Yes it is, has, and many, most of which are in our feet are small because the large can not get where we were, for Beach, Sharks up 3 meters saw close, but only saw their fins. 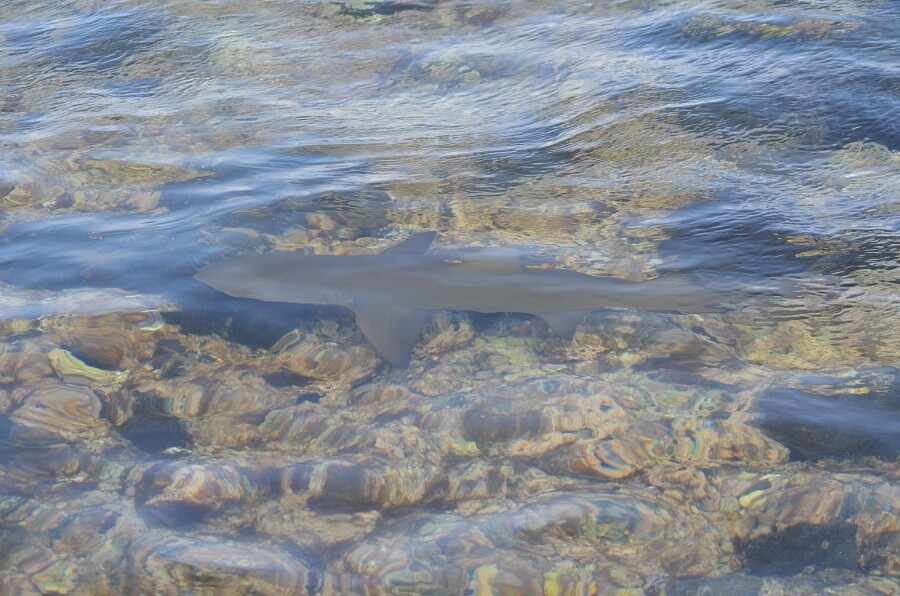 A very important tip is to take rubber shoes that used to go on stone beaches, for there the sea is all stone, we take our shoes because we bought some time ago and we always other beaches Europe, when stones beaches. But if you do not have these shoes, they rent there too for 2 euros. 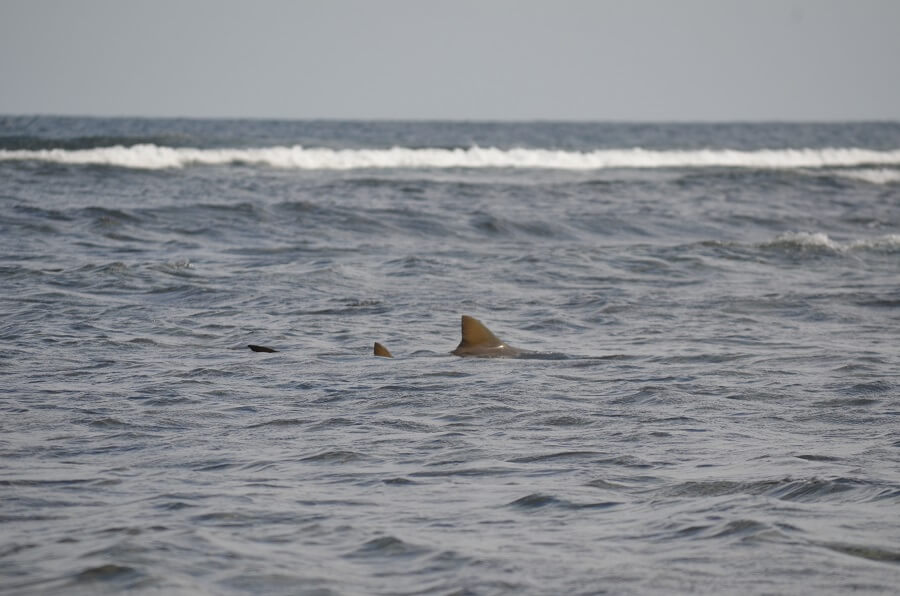 The most fun place of the tour was visiting the Salinas of Pedra de Lume, It is within a volcano crater which has a salt production and a thermal pond waters with high salt density, 27 times more than the sea water, the lake is warm and made us stay afloat as the Dead Sea, the feeling can not sink at all and float all possible ways is a lot of fun and laugh a lot. 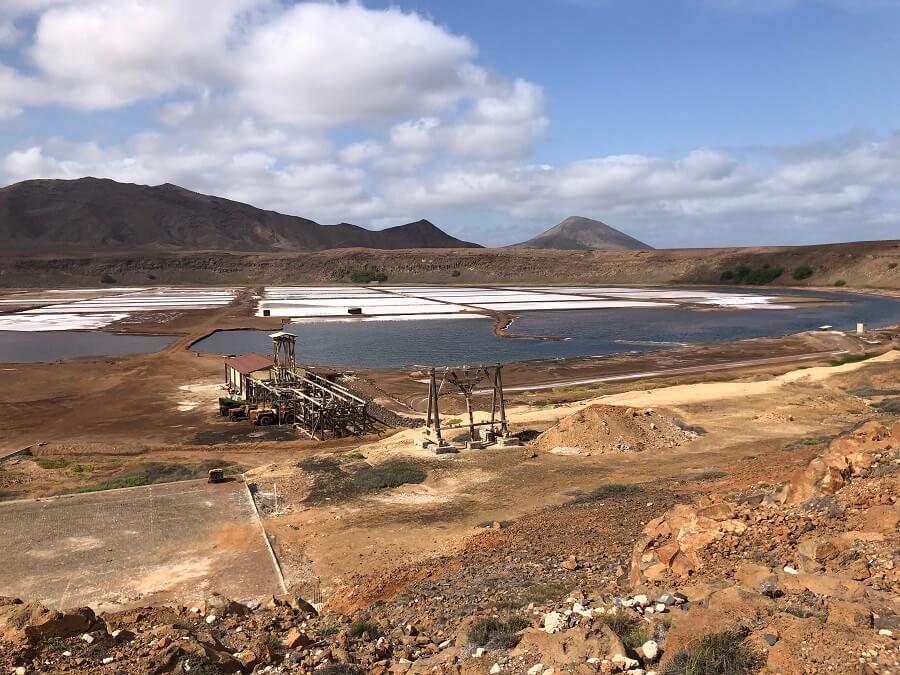 Salinas for being a private place, it's paid, and it is not included in tour, but it is very cheap, 5 Euro per person and worth much worth, we were there for around 1pm. 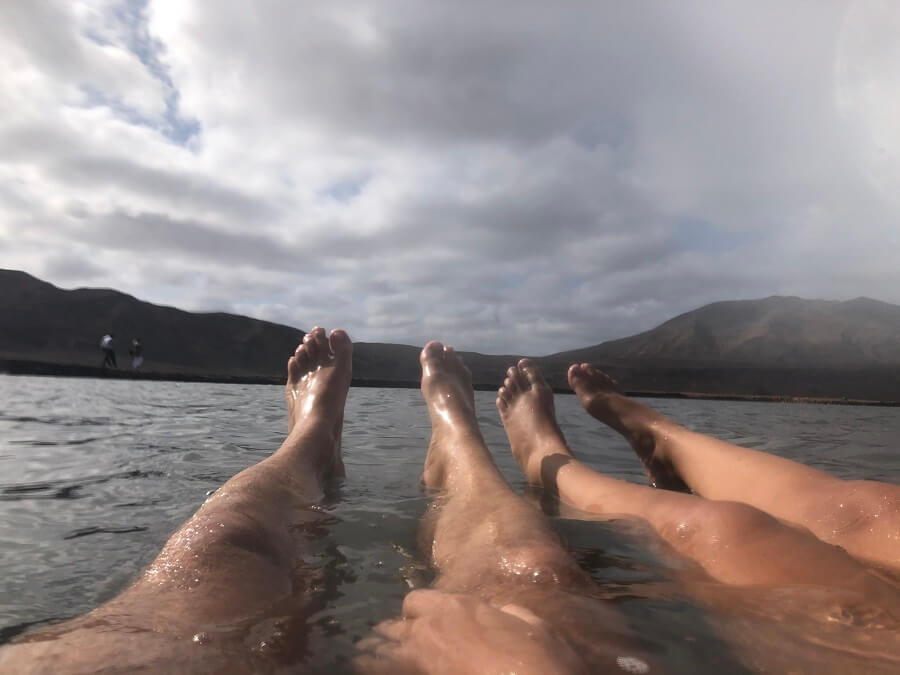 Last tour stop was at the jetty of Santa Maria, in Santa Maria, the city that has the most beautiful beaches in Cape Verde, where we stayed for 4 nights in Hotel Ouril Julia and other 3 nights stay at another hotel the Melia Llana. 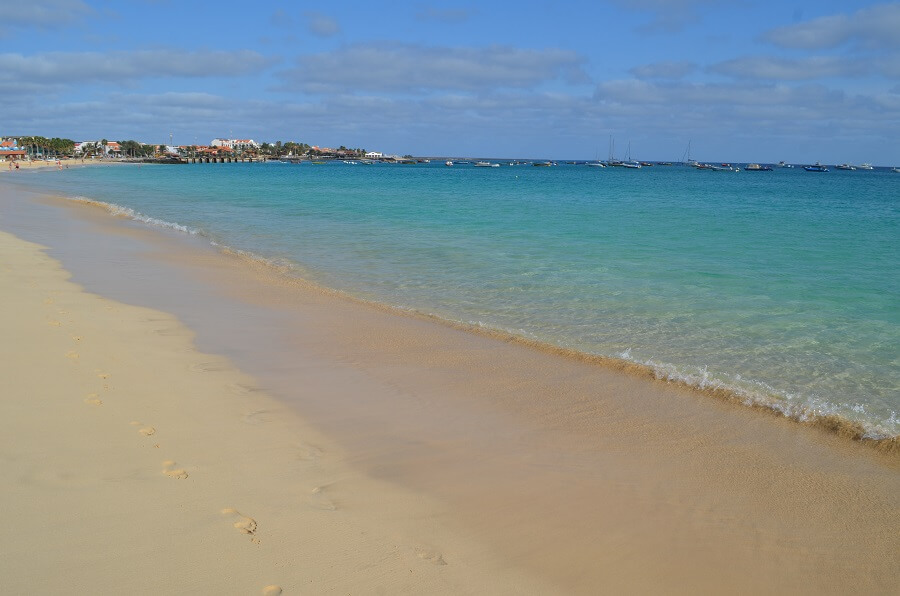 The Santa Maria jetty is a pier where you arrive the fish caught and where it sells as well as in a Mercadão fish, only the open and divides the beach into two parts, It is beautiful to see the work of fishermen and people who make their living from the sea, even in a place as poor as this. 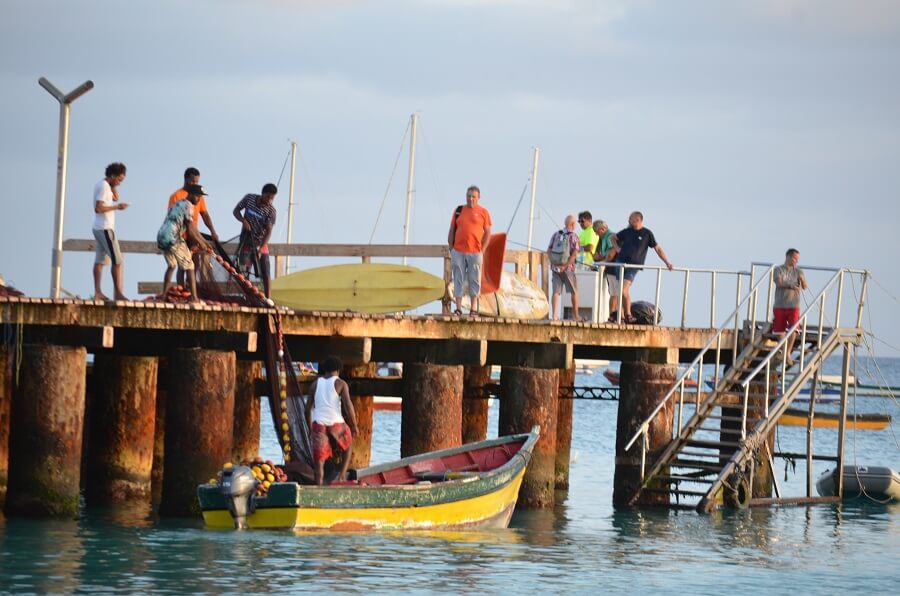 We were right there on the beaches enjoying the end of the day as our hotel was close, so it was not necessary for the staff Morabitur take us to the hotel, but the shuttle to the hotel was also included.

That was some of that lovely walk around the Sal Island we did with wait;, a great company with an amazing guide, with great knowledge and lively, so we recommend taking the tour with them. The reservation of the tour can be made through their site, or in their agencies that have the island. 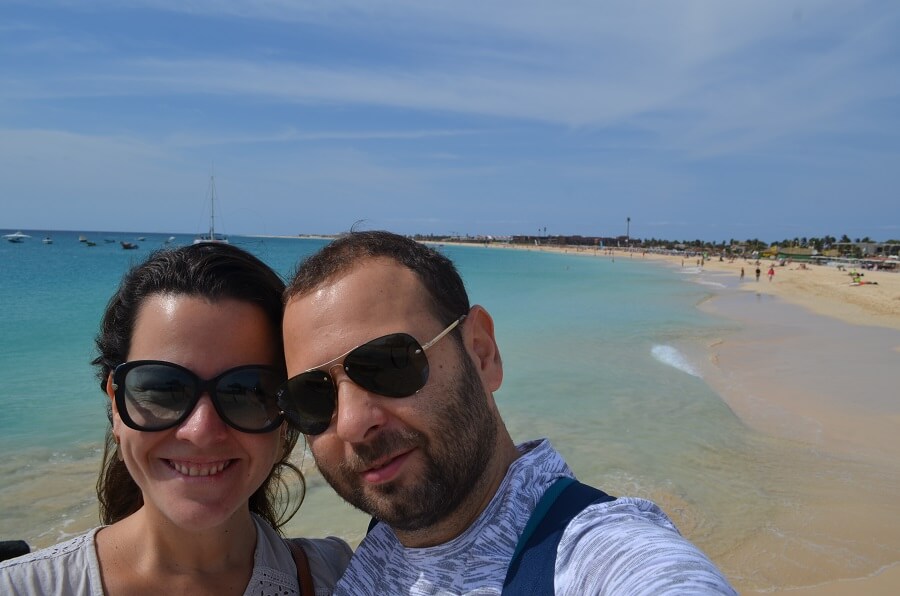 For Brazilians can get in Cape Verde need a visa, but it can be done at the same airport (pretty fast) It is mandatory to have the international certificate of vaccination against yellow fever (although they have not asked me, I Pri, I was with him), Chris entered the Spanish passport, Visa costs for Brazilian 56 euros and the entrance fee to Spanish costs 31 euros (I believe it is the same for all citizens of the European Union, but I'm not sure, so it's good to take a researched and not well know whether to Spanish and other citizenship if you must have the vaccination certificate against yellow fever, but Chris also led it to ensure) the visa and the fee can be paid in cash (we pay in even euro) or credit card, until immigration is smiling and friendly. The country's currency is the Cape Verde escudo which you can exchange at the airport, but the vast majority of establishments in Sal Island, to be a good tourist island, accept euros (but the exchange rate is not as good) then it is better to change money at the same airport or you can also use credit card.

Things to Do in Plovdiv, the second largest city in Bulgaria

May 2, 2019 23
We use cookies to ensure you have the best experience on our website. If you continue to use this site, We assume that you are happy with it.Ok