Pompeii, the city devastated by volcano, which today is an attraction

We the TurMundial not went to Pompeii, but we really want to know this city devastated by volcano, which today is an attraction for tourists worldwide. Then we brought to you, a text of our friend blogger, Itinerary Travel blog, Estela, see that amazing and detailed account she sent to us:

A city ​​of Pompeii (or Pompeii) is 22km from Naples, Italy, and always lived my subconscious since childhood. I loved watching documentaries about, I loved the music that spoke of Pompeii Virgin Steele band and loved the magazines on archeology that put this city as a focus. 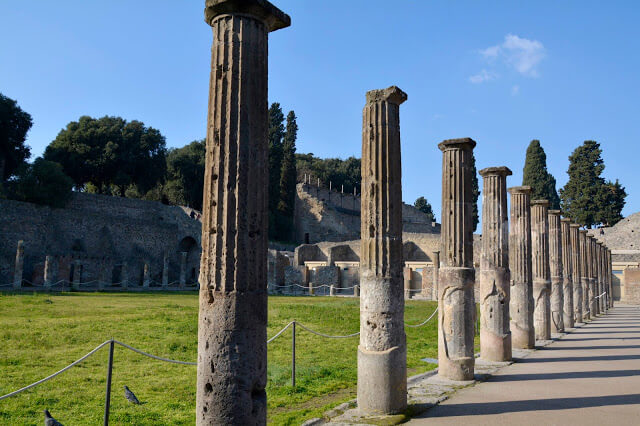 The city is today an archaeological site, It was a Roman city and the fact that it was buried by the ashes of a major eruption of the volcano Vesuvius in 79d.c. It is what makes it one of the most fascinating archaeological sites in the world, since all the mud material and ashes preserved and the city! From what informed me, the city was by the sea, but with the eruption of the sea volcano was removed by ash. Standing there you can imagine how strong this eruption was because the sea is approximately 2km away!

At that time, the inhabitants had never seen a volcanic eruption and because of that, found something strange eruption, But many do not alarmed. The result led to many deaths in the city (and other nearby cities also). Most ended up in the city that was walled and when they decided to leave the city, no more could open the gates, because Vesuvius threw a lot of pumice (a kind of porous stone), blocking doors and gates, besides destroying roofs with the accumulated weight of stones. Besides that, pumice absorbed moisture from the air, causing the atmosphere was completely dry and hot, leading to death all who were in the city. 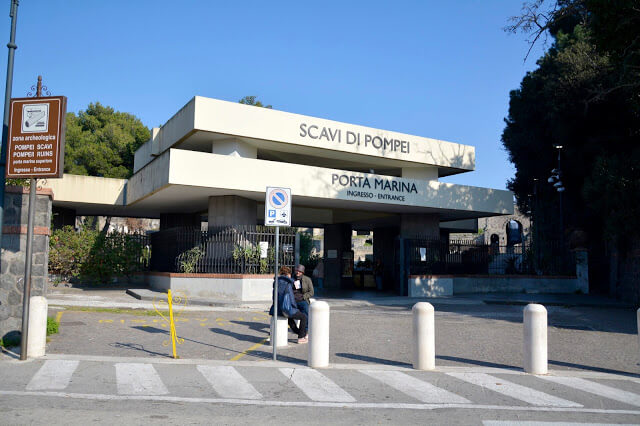 The city was rediscovered only in the year 1749 and all the ash and mud just protecting buildings and city objects, including shaping the body of the victims. Standing there you really realize that the city is well preserved and you can not see the complete structure of a Roman city, with houses, temples and forums. There are even a few paintings on the walls yet. It is considered historical heritage of humanity by UNESCO and receives about 2,5 million tourists a year. 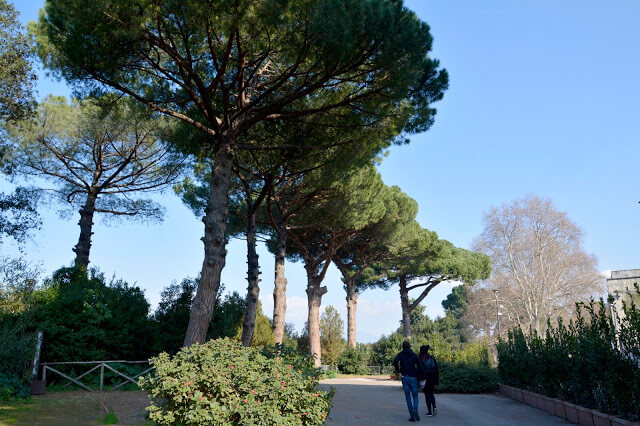 Before you even talk about the archaeological site I better explain how to do to get there: you're probably Naples, So, go to “Naples Central Station” and look for the platform of the company's trains “Circumvesuviana” (that they are different from “Trenitalia” because the trains of this company leave you at a station far from the entrance of the archaeological site). But the valuable tip is to try to find inside the “Naples Central Station” without asking anyone for information, because if you ask for information, a person possibly will help you but will charge money for the information (even uniformed staff). 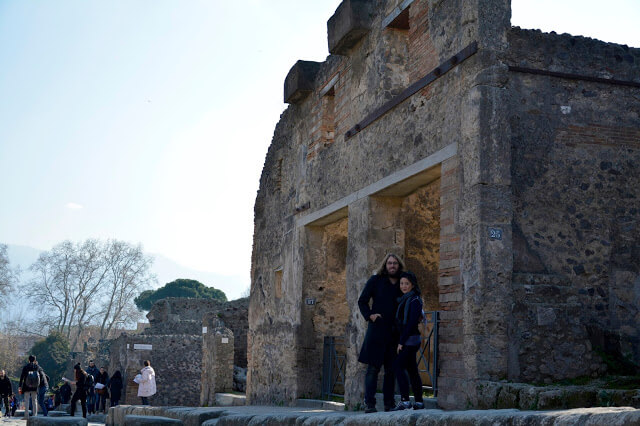 When you find the Circumvesuviana platform, to watch the marquee train that should point the city of Sorrento as the “end”. If this is the sign, soon… you are on the right track! The train is simple and the trip takes about 40 minutes. Keep your voucher or ticket in hand to be validated by the train staff. 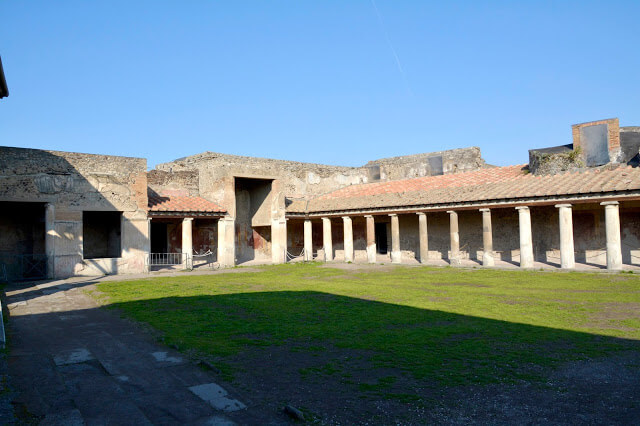 Getting there, the entrance of the archaeological site is a few steps from the exit of the train station and there within Pompeia you can take 4 a 6 hours (It depends on the pace and interest of each).

Worth taking a snack and water in your backpack or buy something before getting into Pompeii or depend on the only diner there. But if you go in high season (it's summer), prepare with massive queues and sun head. 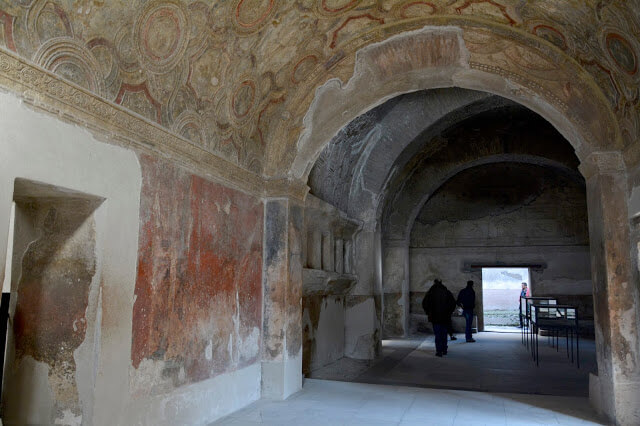 The Travel Itinerary is made by Gisela and I, Wake. Gisela was in the summer and spent a lot of heat, reaching 40 ° C. I went in the winter with my boyfriend and getting there, I noticed that the city does not have many trees for shade… so I understand when Gisela complained of the heat there…. even because, even in winter, I got a little heat. 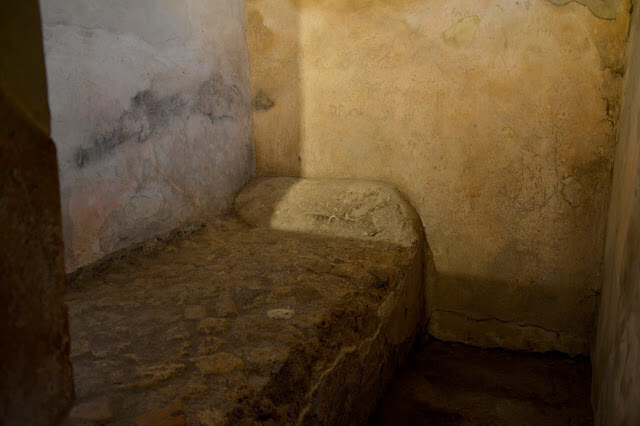 As the archaeological site is an entire city, obviously the place is huge. Unfortunately there is not a location map of the sale at the box office spot, means which then walked by “feeling”, which I found very bad. I suggest you search for a map on Google, print and take with you. Thus, will optimize your time and focus on the main places to visit. But if you are “god will give” like us, It will not be something so random, by the way, I think even we passed places that hardly anyone will…

I consider city ​​of Pompeii as the most complete Roman city of example because everything is really well maintained and as it is very large, There are many examples of buildings. There you can view the complete structure of a Roman city, the houses of structures, temples, forums… Wow… I loved so much! It was beyond my expectations!

One of the most important points of this tour is to pass by the Forum which is a magnificent place! It is still possible to imagine how it should be, all imposing and to complement the beauty of the place, Vesuvius is right background on the horizon. There is a shed with some bodies shaped by ash and the picture is very shocking! 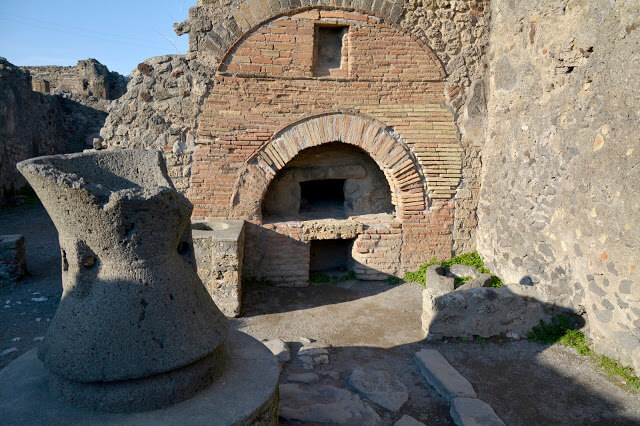 Left Forum, there are sets of very interesting houses, with painted facades and a part where archaeologists work to uncover the city, because it is not 100% discovery of ash, that is, still have a lot to learn.

Another point that everyone wants to go is the house where worked a brothel. You can see the walls decoration that indicates that there was in fact a brothel. The place is very small and it is difficult to know it, because many people go there at the same time. It gives up to see the little stone beds of small rooms and wondered that Pompeii staff should have a very low height, It was all too small to me, which has 1.56 m rsrsrs. 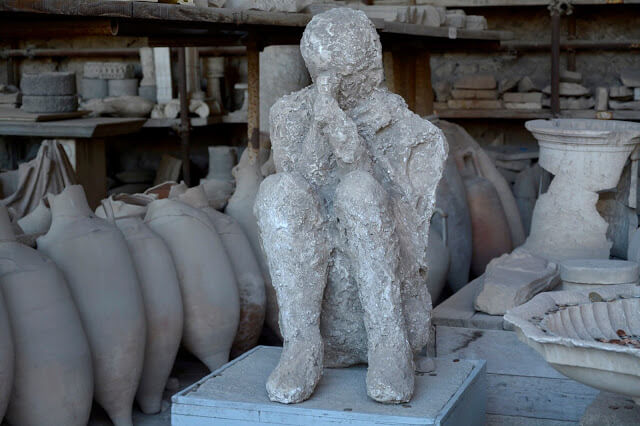 Unfortunately you can not go into all the buildings whenever you want. Some have restriction of movement of people. There is even a shed where you can see archaeologists “digging up” another part of town. On the day we were there was expedient, but it is a good tip for you plan to visit. 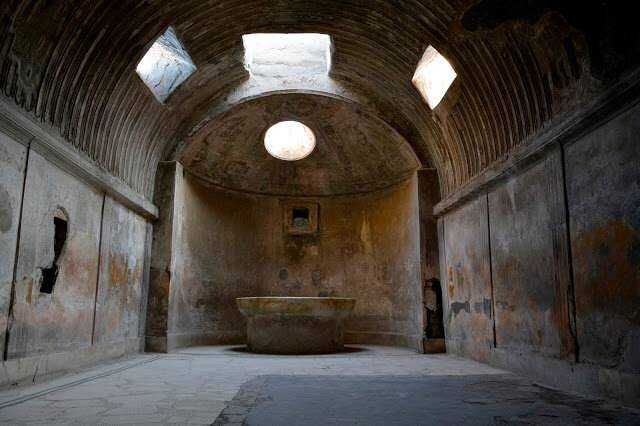 Spend almost all day in Pompeii was one of the coolest tours I've ever done. It may seem trivial, but I felt really in a Roman city and it was like visiting a part of history that has always fascinated me a lot!

Another much-visited archaeological site is Erculano and we also visited, on another day. We loved both experiences and definitely go easy, easy! 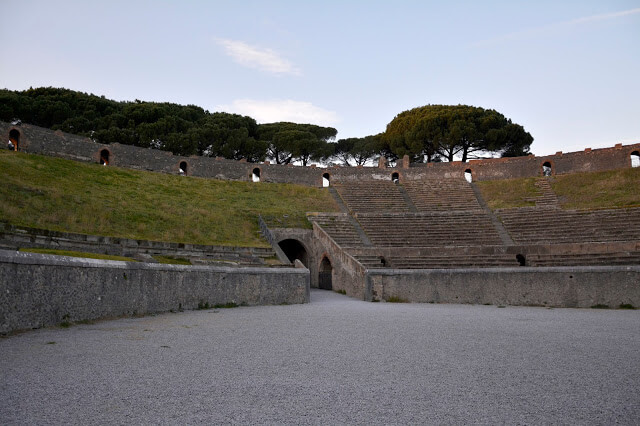 About Estela:
She is a founding member of the Travel Itinerary blog that has existed since 2012, but it only became a “.with” in April 2014. When she chose a travel destination, it is usually attracted to those that include a lot of history, art and architecture. Whenever she can, try to add sites that are beyond the ordinary tourism and, for this, conversation with the inhabitants of the destinations visited in search of unusual experiences! She likes to try to live your travels of the local inhabitants view, so always seeks to go to markets, local restaurants and, ultimately… she will be sticking anywhere!

How to Income Tax in Spain (Income tax) for the first time?
Video – National Park Calanques