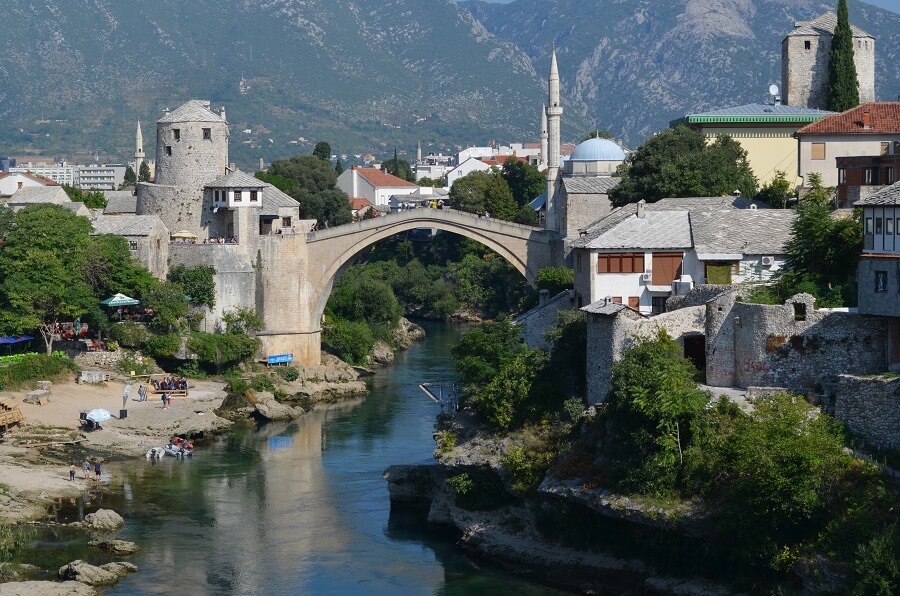 Screenplay by Bosnia and Montenegro, two countries of the former Socialist Federal Republic of Yugoslavia, They are located between Croatia and Greece in a region with many natural and cultural beauties.

A Bosnia which actually is called Bosnia and Herzegovina is a country that has a small coast, and endured a civil war, which lasted for years and killed many people and is still very present in the country, this war many people, like us, We are seen on television, a war that ended just over 20 years, it lasted from 1992 a 1995. Bosnia beyond this war, It was also the trigger for World War I with the Austro-Hungarian Empire of King's assassination in Sarajevo, for all this, across the country you will find walls with shots on the facades, a mixture of religions as Catholics and Muslims, and also nationalist Serbs, a large mixing, but nowadays it is a very safe country and without being crowded with tourists.

Montenegro not gone through so many wars, but its independence took place less than 15 years, in 2006, its main attractions are its beautiful coastline, such as the city of Kotor, and the capital of this beautiful country is Podgorica.

We made a script by Bosnia and Montenegro by 9 days and, We fall in love by the two countries, We drove over 2.000 Km, We began the journey in Croatia the airport Dubrovnik, because the flight from Barcelona to there was very much cheaper than going straight to Montenegro or Bosnia, speaking in Dubrovnik, be sure to visit this wonderful medieval city, one of the most beautiful in Europe, as we had already been there, We arrived at the airport pay the car and we have been straight to Bosnia.

Meet the cities of our Road Map for Bosnia and Montenegro

Before speaking of the cities, will comment a little about how cross the car border between Croatia and Bosnia, beyond that green document you should have the car, You will have to show your passport, Brazilians do not need visa to enter Bosnia, the queue to cross the border is huge, you will take at least 1 hour, especially in summer, so it's good to go with time, unhurried, as we were, will be 2 controls, the first passport control to leave Croatia and the other then to enter in Bosnia and Herzegovina, the process is very calm, you do not even need to leave the car, only a little time consuming, then gave time to eat, take landscape photos around lol.

Trebinje, was our first stop script by Bosnia and Montenegro, we stopped there because it is a very interesting city with Roman bridges of the medieval age, high above the city has a beautiful Greek Orthodox Church, and a panoramic view of the whole city, Moreover as it was Saturday, wanted to buy a mobile chip for our Spain is very expensive to use in Bosnia, that is not part of the European Union and we were without our international chip Travel OMEU Chip, but I had no place that sold, We followed the journey with Google Maps offline module maps, but for this you need to download before the map. 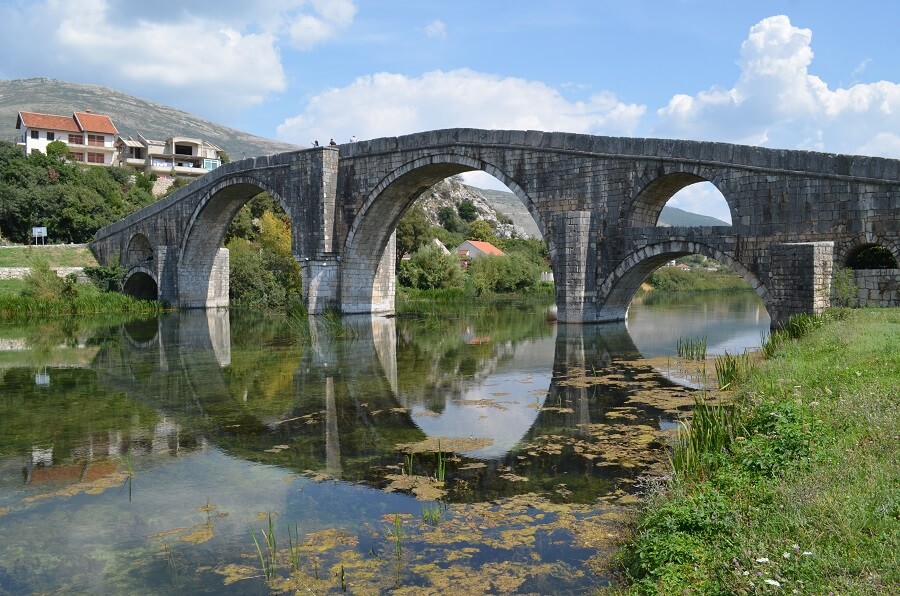 Our next stop was Stolac, an entire city marked by gunfire in homes and buildings, and a medieval fortress, It was only a small stop 1 hour. 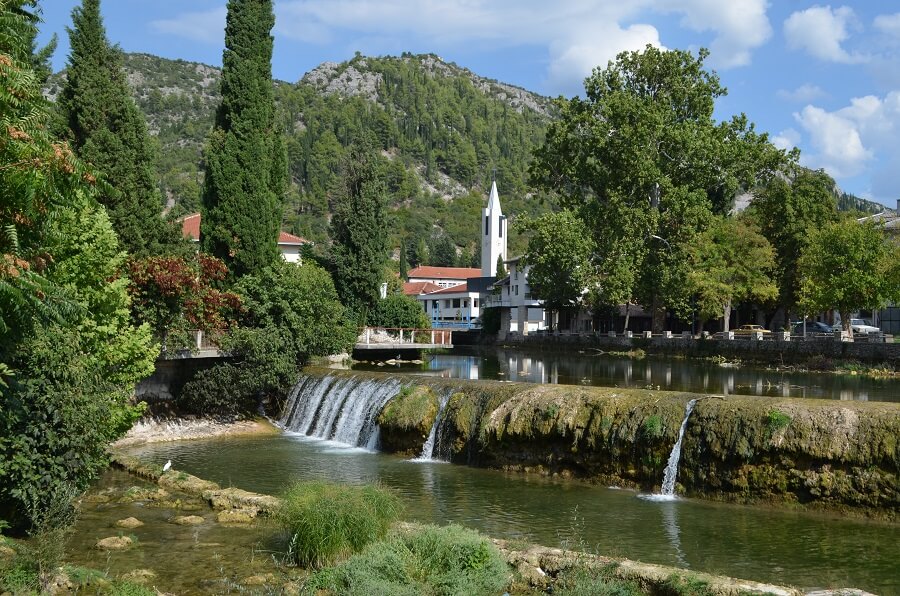 After going through these two cities we arrived at the main stop of the day and sleep in the city that it was Mostar, one of the most famous cities of Bosnia, because of a beautiful Roman stone bridge, the bridge has 24 meters high, it lasted 427 years, but it was totally destroyed during the war in Bosnia in 1993, but it was rebuilt and reopened in 2004. On the day we were there was having the championship Cliff Diving, that the staff jumps platforms and do stunts. The city is beautiful, love. 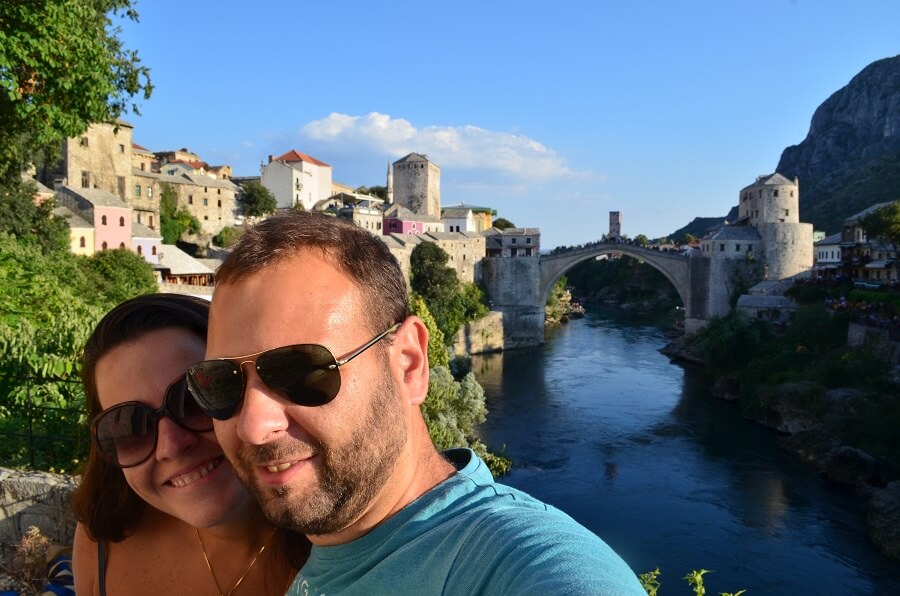 On the second day trip we left Mostar towards Sarajevo, on the way we stopped at Blagaj, a small town whose main tourist attraction a river of crystal clear waters that come from inside the rock, the river begins a stone, like a dead end, on the river banks there are several restaurants and bars, an impressive place of nature, a river that is born of Stone Mountain.

On the second day we arrived late on Sarajevo, where we stayed 1 day, a city we did not expect much, but that proved to be totally different and interesting, as we talked about at the beginning of the post, one of the city's bridges, the heir to the Austro-Hungarian Empire, Francisco Fernando da Austria–Hungary, He was murdered, with this crime World War began. In addition the city has very beautiful places to visit. 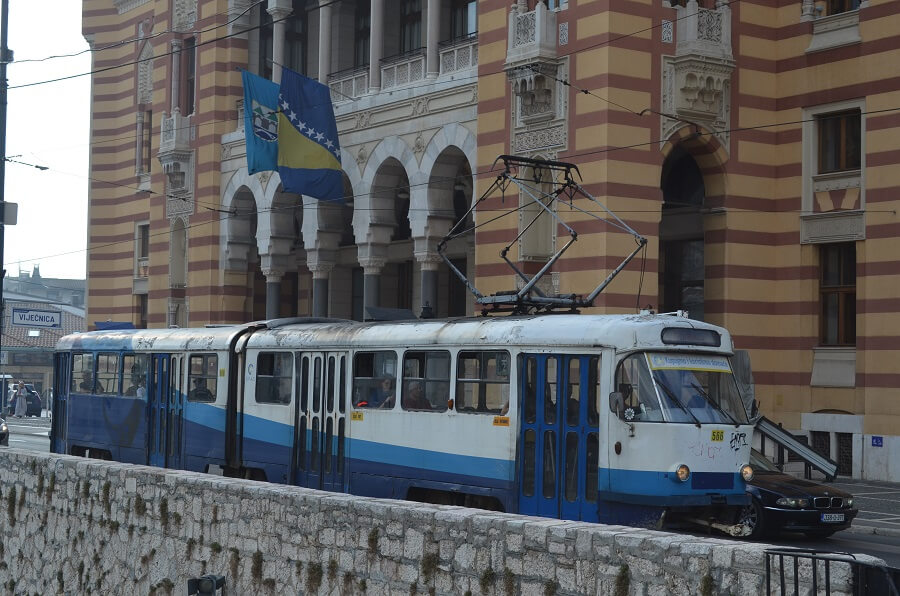 Third day, the longest day of the trip on the roads, we left Sarajevo towards Bar in Montenegro coast, are 300 Km, more of 5 hours of travel, the road connecting these cities including the capital of Montenegro is simple single track, It is so simple that near the border between the countries in the Bosnia and the road was dirt, with thousands of curves until I would not have a border stop spending so simple, but as they had several cars on the road we were quieter, and again we linger over 1 Time to cross the two borders, because of immigration row, the path between the cities visited the repressing the Mratinje Dam, It is beautiful too, the water dam is an amazing shade of blue, you do not care to stay so long on the road, but that when you just arrived in Montenegro.

Also we stopped at Ostrog Monastery, a very old encrusted monastery on top of a mountain, inside the rocks, very different from all the monasteries we have visited. 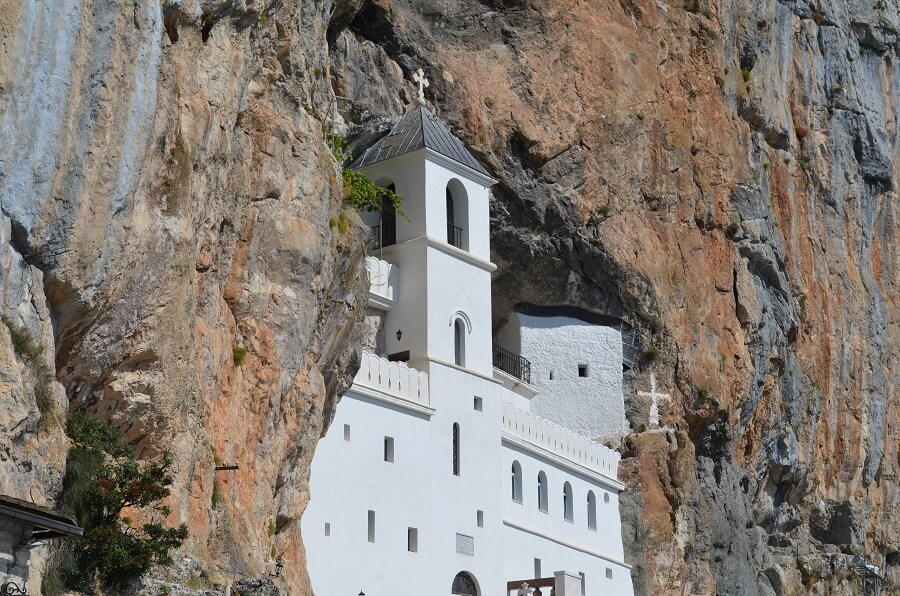 Also in this third day visit Podgorica, but we found a city completely bland, We strolled through the city but do not like too, there finally bought a mobile chip to have internet data in the rest of the trip. 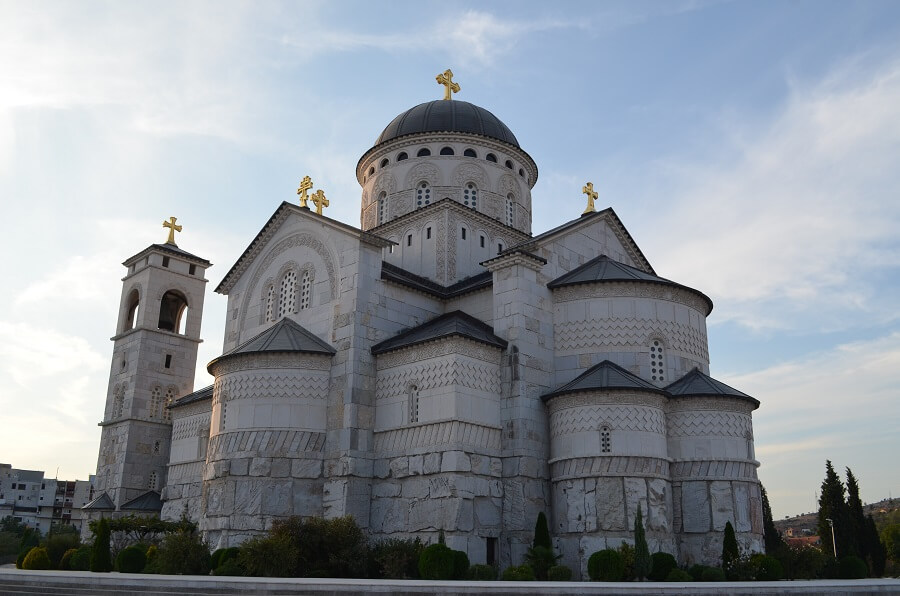 At the end of the day, already we arrived at night Bar, city ​​were two days, Bar is Montenegrin coast sul, there made base to see all the southern beaches to the border with Albania. 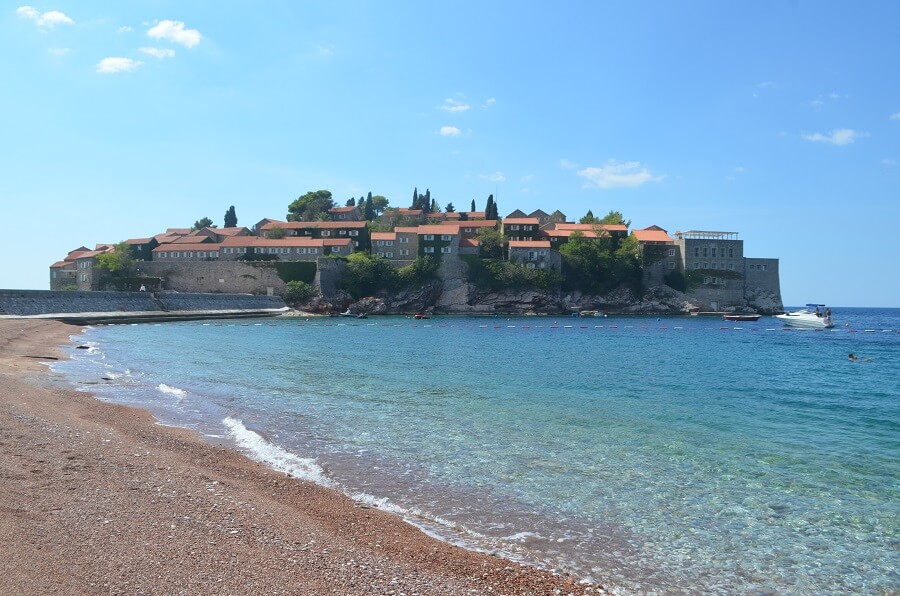 In the days 6 e 7 we stayed in Budva, another beautiful city of Montenegro coastline, this is more in the center of the coast, as well as Bar, Budva made a stop to discover the nearby town beaches. 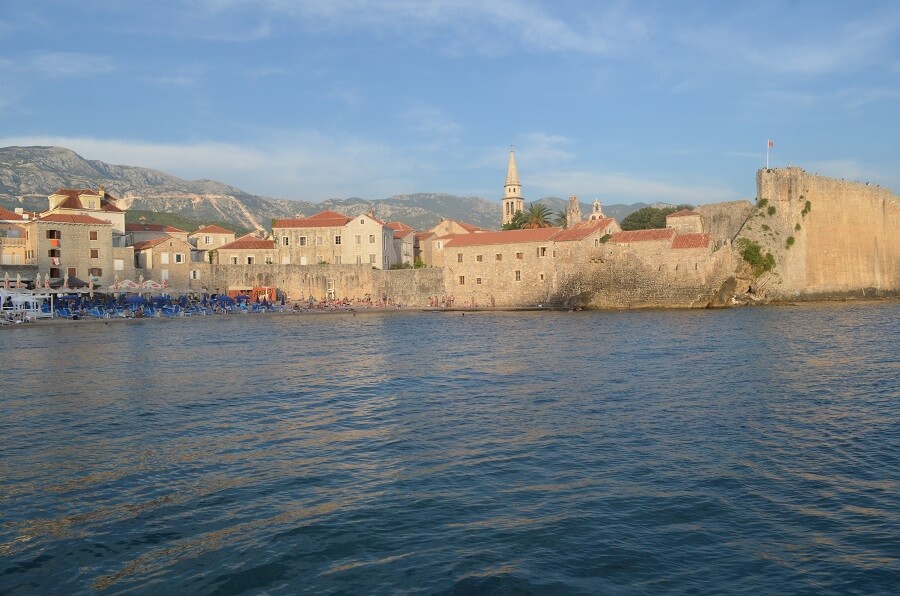 In the last days of the trip day 8 e 9 we hosted in the most famous city in the country and the most beautiful, what is Dirty and its beautiful bay, the city is already on the northern coast of the country, there is the city of Perast, sooo charming. 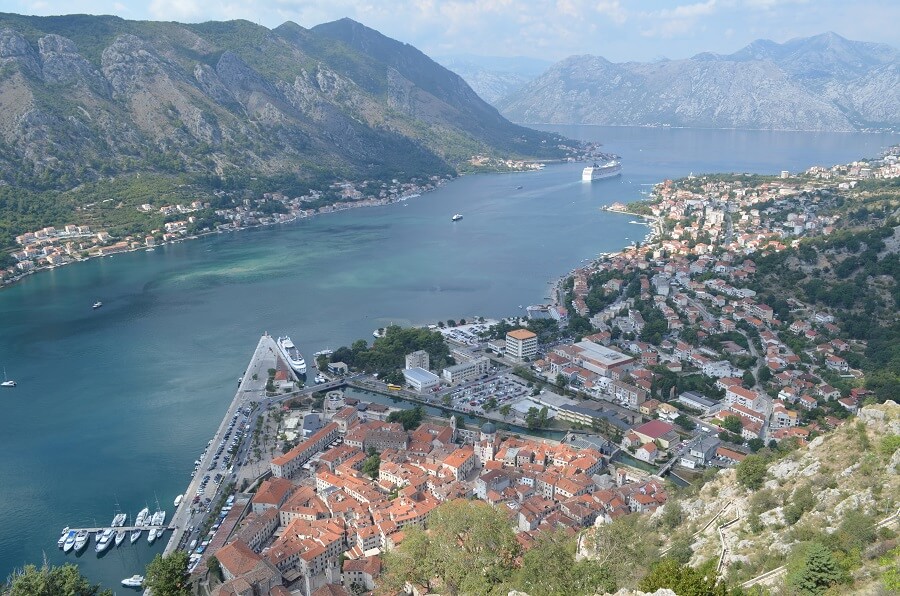 On the last day we had to return the car in Dubrovnik Airport, where the journey began, because we made a circle that screenplay by Bosnia and Montenegro, as we saw that could have a lot of traffic to crossing the border with Croatia Montengro, We went with plenty of time, as we did not catch a lot of traffic we have to enjoy the town beach Cavlat, Croatia, very close to the airport.

In every city we stopped we will create a post to talk about them, give more detailed information and tips, keep visiting our blog and know most places in the world.

He feels like traveling after so many tips? The Blog TurMundial gives you even more tips to ease your travels: Want to book a hotel? Book hotels with great prices by Booking. Want to book an apartment, home, boat or even a tree house and still win 100 real in his first stay? Book all these and many other choices of places with great prices by Airbnb. Want to buy advance tickets for various attractions and tours without those huge queues? Buy Ticketbar Want to rent a car? Undoubtedly indicate the Rentcars.com it seeks the best cars and market values. You need to send or receive money to / from abroad, without paying those absurd charges of bank or exchange houses it Wise You want to avoid problems in the middle of his long-awaited trip? Hire a travel insurance with any of these companies Real Travel Insurance, or insurance Promo You want to avoid those sky-high mobile bills at the end of his international trip? And yet able to do, receive calls and use the internet? Buy an international phone chip with any of these companies: OMeuChip or with the or with the OBS: We emphasize that the responsibility for providing the services / sale and delivery of products, suppliers are described above.
CategoryEurope Things to Do in Montenegro? What to do in Bosnia and Herzegovina? What to do in Croatia?
TagsBar Blagaj Bosnia Bosnia and Herzegovina Budva destination RBBV Dirty Montenegro Mostar Ostrog Monastery Podgorica Map Car Sarajevo Stolac Trebinje

Kotor the most beautiful medieval town of Montenegro