Screenplay by Switzerland, 4 days in the country of chocolate, alpes, watches and more…

Screenplay by Switzerland, or country Deux Alpes, lagos, name, the famous and chic ski stations, country known internationally for its delicious chocolates, cheese, expensive watches, penknives, it is all that and much more, Switzerland has beautiful towns to visit the wonderful lakes border made by melting Alps, spectacular scenery and all the cities that we were flowery and incredibly clean.

We the TurMundial spent the Easter break in this beautiful country, We know 5 cities and we will tell you here what to do in Switzerland.

Our script by Switzerland

Our first day was in the city of Zurich, that many find it the capital, but it is not, the capital is Bern. Zurich is best known for being the financial center of the country, a beautiful city on the edge of Lake Zurich, very rich. 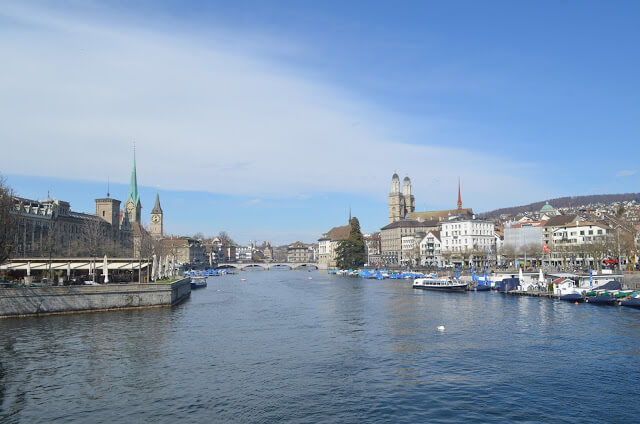 We stayed in Zurich a day and slept one night, arrived early in Zurich airport is the country's main, and one of Europe's main, from there we took a train to pay a 6 Euro per person towards the city center you can buy at the airport even.

One day we thought was long enough to know the city, of course if you can stay longer, is better, but one day has to know the Zurich main city attractions. See our post on what to do in Zurich our tour tips around the city.

On the second day we went to Lucerne, another town on the edge of a lake of the four corners, a great city to Swiss standards, more or less 200.000 population, a city conquered by various peoples, today there are remains of these settlements and invasions, as the seven towers and the wall of the ancient castle of the Roman era. 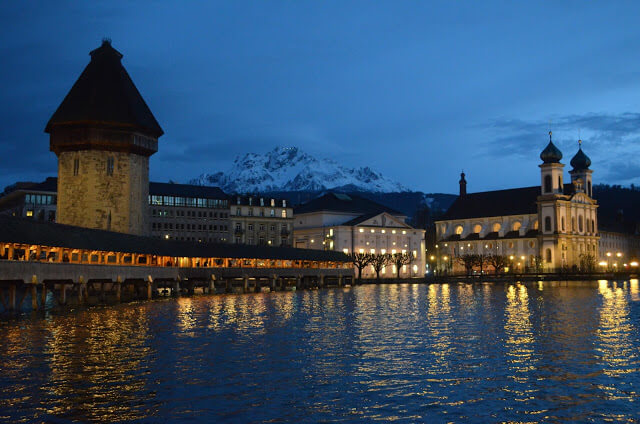 We arrived in Lucerne early, We arrived by train from Zurich, the train in Switzerland is the best way to get around the country, they have a large railway network connecting all cities, besides being cheap compared to the rental car. See our tips on where to buy train ticket in Switzerland.

A main attraction of Lucerne is a bridge over the river,chamada Kapellbrücke (Chapel Bridge) a wooden pedestrian bridge with a roof and several paintings 112 to be exact and are the seventeenth century, but it was restored in the twentieth century. And this same bridge had a fire that destroyed a part in 1993 but it was rebuilt in 1994.Mas Lucerne is not only that, It has a beautiful wall with three towers high above the city that you can visit for free, walk over the wall and being able to catch sight of all the beautiful cidade.Outro very cool place is the lake and walks by it, the summer has to have “Beach” not Lake, but if you want more information see the unique post on what to do in Lucerne.

Like all cities we visit Lausanne It is also on the banks of a lake, in this case is Lake Léman the most famous of, It is immense and has the scenery of the Swiss Alps with snow (during the winter) we were in the spring and still had, and has beautiful cities in his bank. 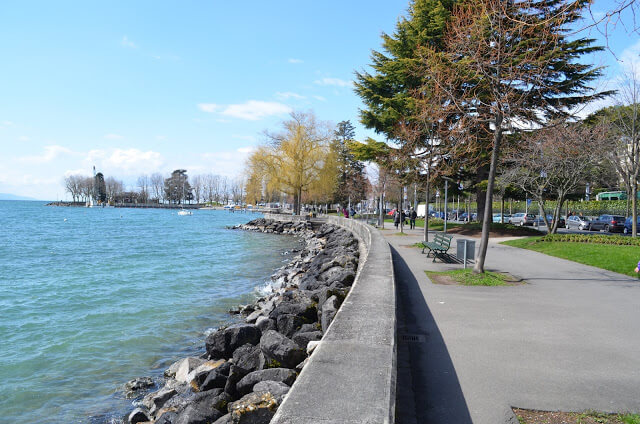 We arrived by train from Lausanne also, this town would not sleep like we did in the first two, only one pass 5 hours there, and as we were backpacking we leave the backpacks in the locker train station, the stations have lockers 5 e 8 euros, the 5 Euro fit two backpacks quietly.

The city is divided into two parts, the upper part and the lake, first visited the high end, there is a cathedral and a city lookout, among other attractions, in a wonderful lakeside promenade and the Olympic Museum, like this stop too ? Want to know more about what to do in Lausanne? See the post more details.

Montreux It is also on the shores of Lake Geneva, Lausanne is a city less than just that's cute, its boardwalk is very flowery and only pedestrian, a walk there is mandatory, and sit on the benches which has the road and enjoy the view, It is a real sight for sore eyes. 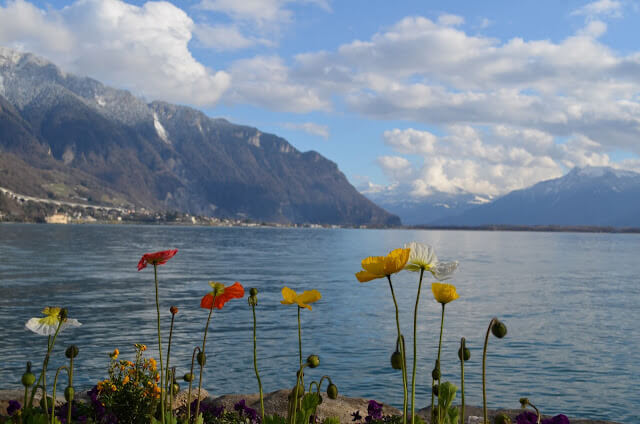 At the end of the boardwalk since arriving in Veytaux, It has a castle on the lake shore, called Chillon Castle, beyond the castle, the region has some wineries to visit in summer and winter is the most beautiful catch a train and climb to the Swiss Alps, just go prepared to pay dearly, Switzerland because everything is very expensive.

Montreux only we get to the afternoon, because in the morning we were in Lausanne, He has to take, but I confess that we are willing to become more, this city is in it, not because it has a lot to do, but for her it's wonderful climate, we would be a couple of days. And closing the day we left there by train and went to Geneva to sleep there. See what to do in Montreux

One of the most famous cities of Switzerland, for having one of the UN headquarters, there is the UN building that you can visit and see the flags of all member countries. 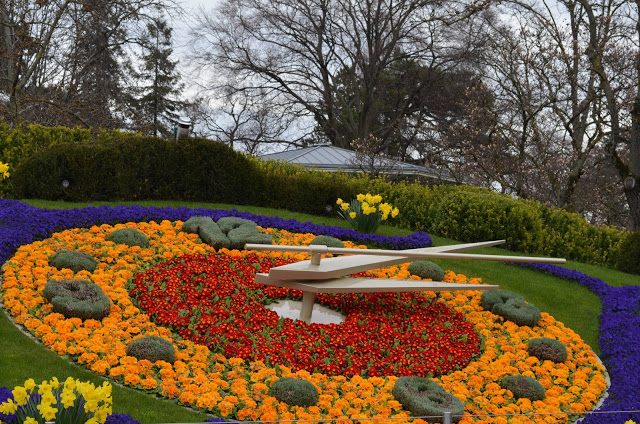 As Montreux and Lausanne, Geneva is also in the Leman lake shore and the most famous postcard of the city is the water jet that has in the lake, the world's largest.

In the summer the lake becomes a beach for all residents and visitors, in winter it is beautiful to see the mountains of the Alps full of snow, and from there you have a view of Mont Blanc, image used by many brands worldwide

Almost everything in the city is around the lake, but a visit the old town center is well worth it, beyond the Promenade des Bastions.

In Geneva we stayed one night and one day, in the evening we strolled by the lake enjoying the beautiful full moon that had that day. He was eager to know what to do in Geneva? See the post on the city.

This was our screenplay by Switzerland, were 4 days and 5 cities visited this wonderful country.

Montreux, a charming town on the edge of Lake Geneva

Things to Do in Lausanne?