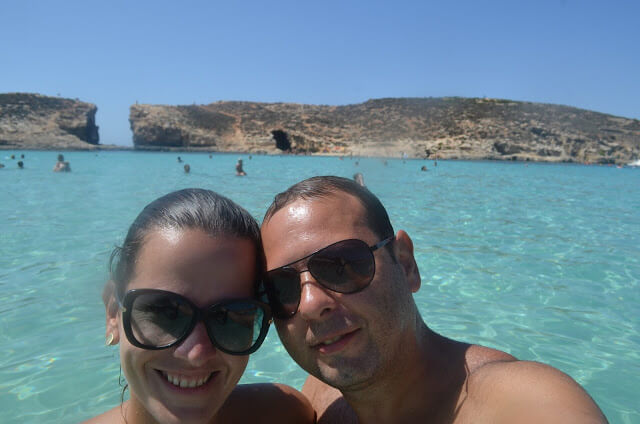 Malta is a small country in the middle of the Mediterranean Sea, made up of five islands, we were there in the summer of last year, What is the best time to visit the country and here we tell our screenplay by Malta, We stayed there for 7 days and gave to know the whole country because it is very small, Look what to do in Malta.

We got the international airport Malta, and already at the airport we took the car rent for the entire period of stay, and here's the first tip, the best way to meet Malta's car, because the public transport there is not very good and has several tourist attractions in Malta that you can only get to know by car. Another very important thing to know is that there is a direction from the left, the famous English hand, we had already driven on other trips in the English hand, and in Ireland, northern Ireland then already knew a little how to drive in the opposite direction we were used, so we took the night drive almost dawn and went to the apartment we had rented by AirBnB in the city of Bugibba.

This brings us to our apartment late only with time to sleep even.

1DAY, and in all the trips we do, before her planned much to see all the major tourist attractions in Malta so we do not forget anything and we got lots of tips from those who have made the trip and put stars on Google Maps to facilitate the creation of the script, but back talking about the trip.

We wake up early, we went to the market to buy breakfast food and dining, for economizarmos, We went back to the Airbnb apartment had breakfast and went out to meet.

Our first stop was the Dingli Cliffs, are beautiful cliffs with an incredible panoramic views, there also know the Chapel Magdalene, We took the landscape and strolled by a boardwalk, in the region there are still two other chapels Annunciation Chapel, and the Our Lady of Mount Carmel Chapel, but that we do not know because we wanted to enjoy the day on the beaches that were the next stops. 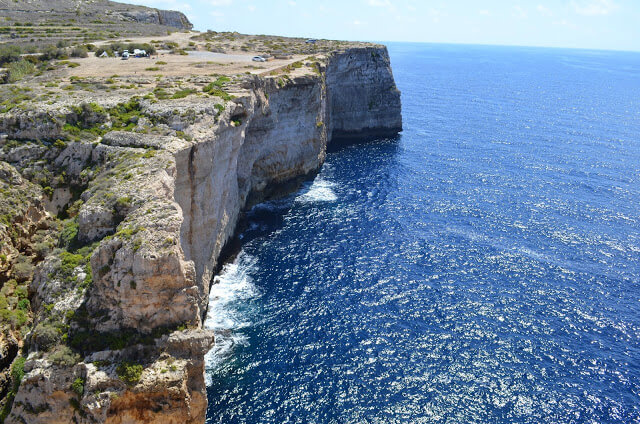 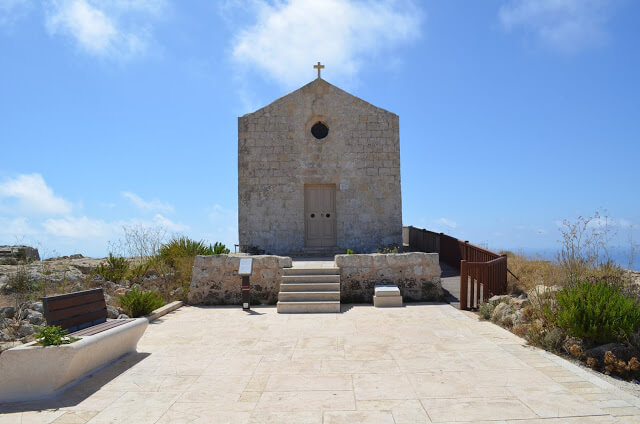 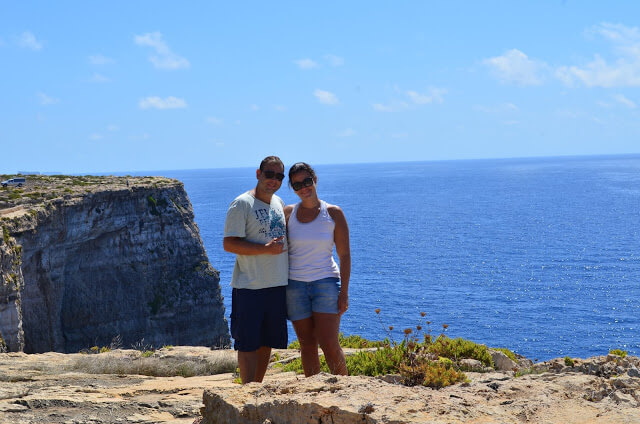 On the way to the beaches still passed by two other really cool points of cliffs that are, Ras id-Dawwara e o Migration Joy

The first beach we stopped at was Ġnejna Bay Beach, a beautiful bay with crystal clear blue waters with fine white sand, not all Malta beaches are sandy, the site has free parking. 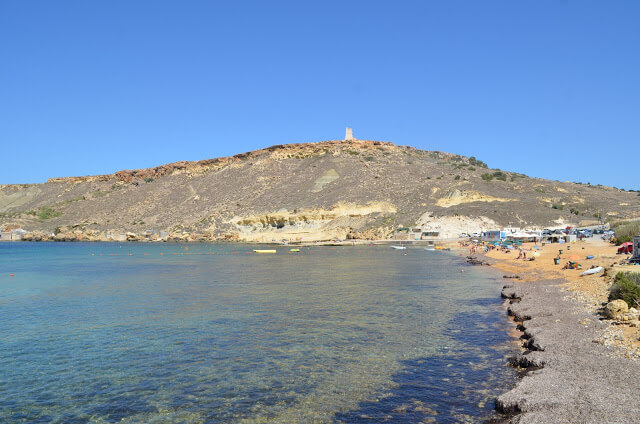 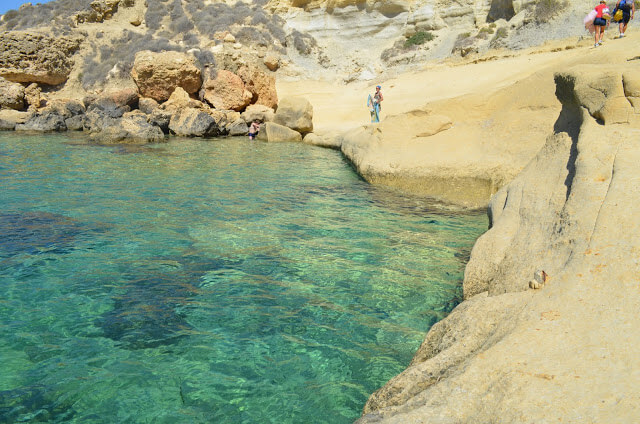 Then there were the other two beaches, all of them are very close to each other and have ways to make, but we prefer to go by car and leave it in the second beach day, which was Ghajn Tuffieha Bay, it is very similar to primera beach, and beautiful too. From this beach you can climb a hill and see Ġnejna Bay Beach on one side and on the other side of the hill you can see Golden Bay Beach. 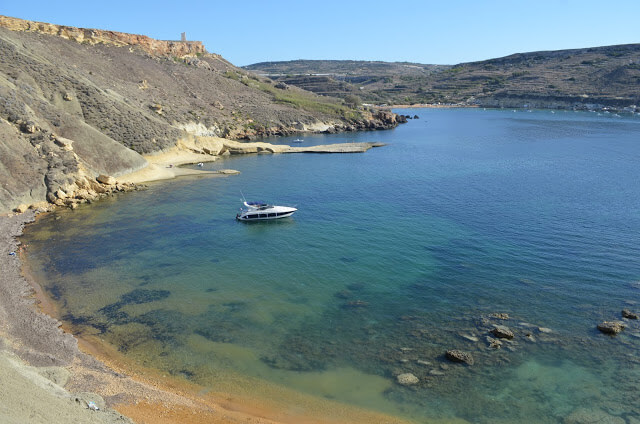 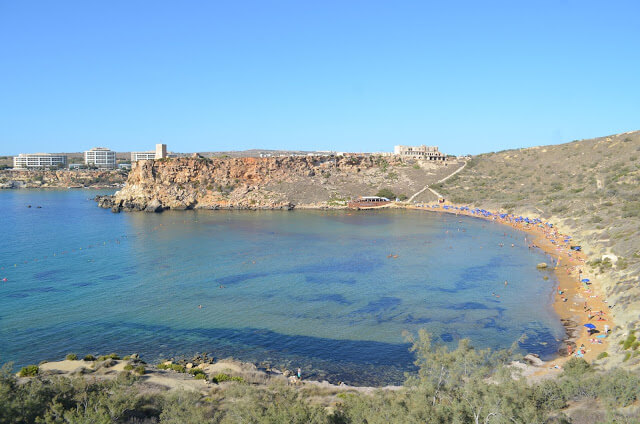 The last stop of the day was at the beach Golden Bay Beach, that we walk because it was very close, this beach is one of the most famous Malta, to be large fine sand, with a beautiful sea and is one of the few beaches that has a gorgeous sunset at sea. On top of this there can also barbecue on the beach, we saw many people doing there. 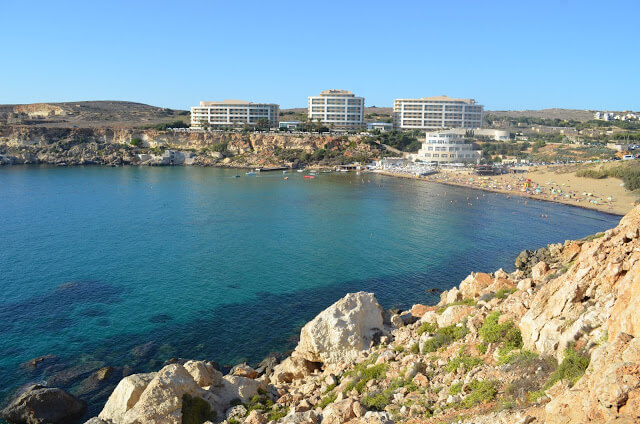 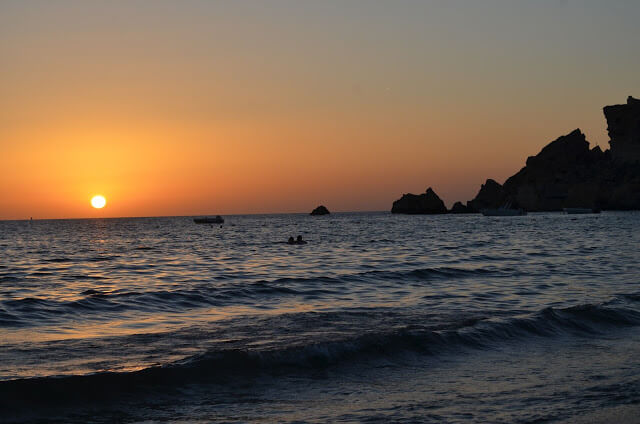 Already night we returned home, and we went for a return by sea Bugibba, We took advantage of the evening to have a beer and experience the nightlife of the city.

2first day, let all the day set aside to go to one of the main attractions of Malta, a Blue Lagoon, and for being so lovely and made a special post only on the Blue Lagoon. 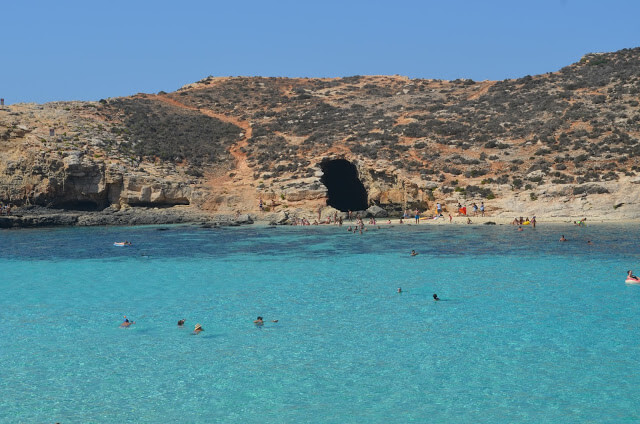 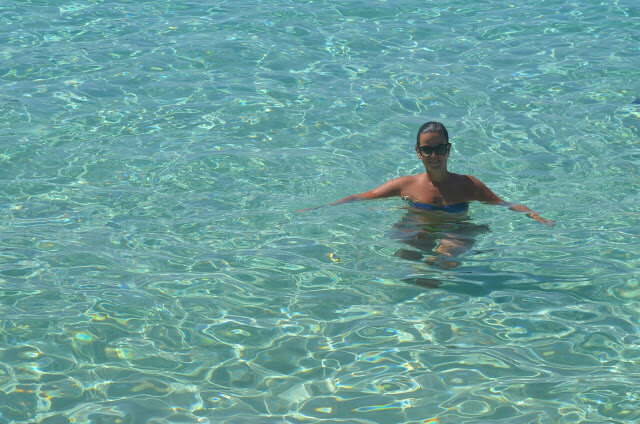 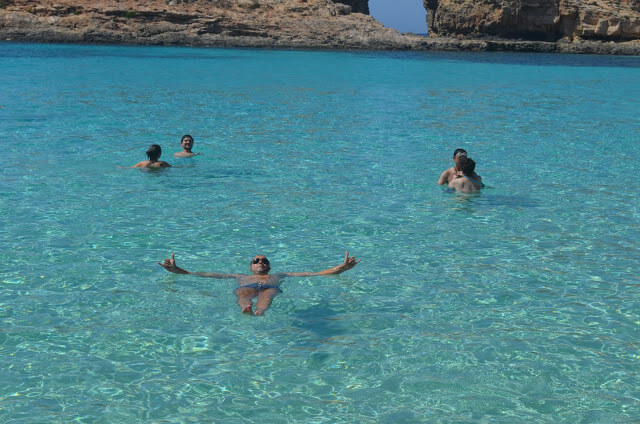 We were there all day, because we come in the morning on the pier where leaves the car, see here on Google Maps where is the pier parking, to go to Blue Lagoon is good to arrive early to find a place to park the car and light and enjoy the Blue Lagoon.

The last boat ride off the island at 17:30, as at that time we went was summer, still I had enough hours in the day to enjoy and continue our route and went to Popeye Village, before we spent in a beautiful tower halfway. 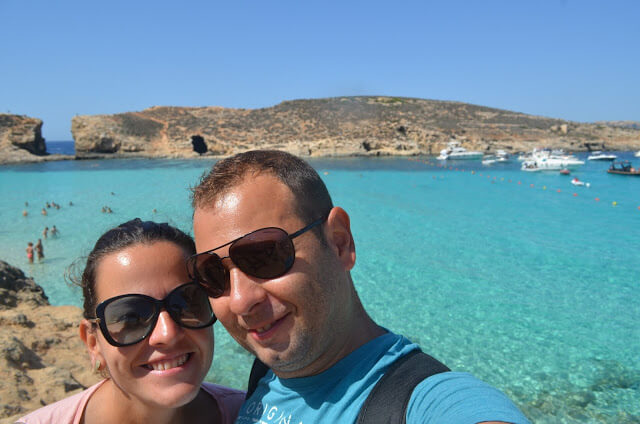 Popeye Village, It is a theme park where the movie Popeye was filmed, It is a pretty cool place and beautiful, the village is facing the sea with those pretty blue waters of the Mediterranean Sea, not visited the park as when we arrived it was already closed. 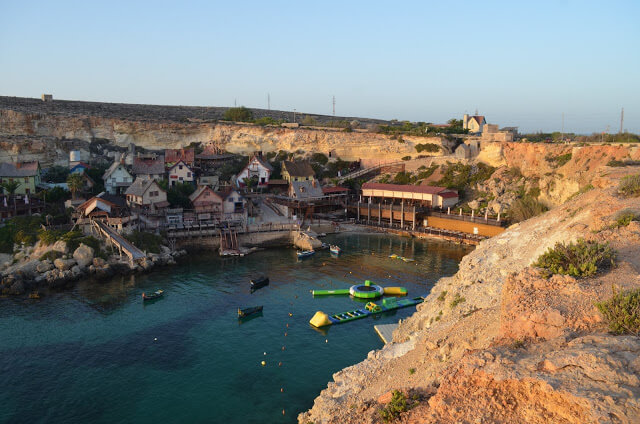 We were a long time over there, there was a beach next to it with a beautiful view from the top of the cliffs for the sunset at sea, was too, we recommend. 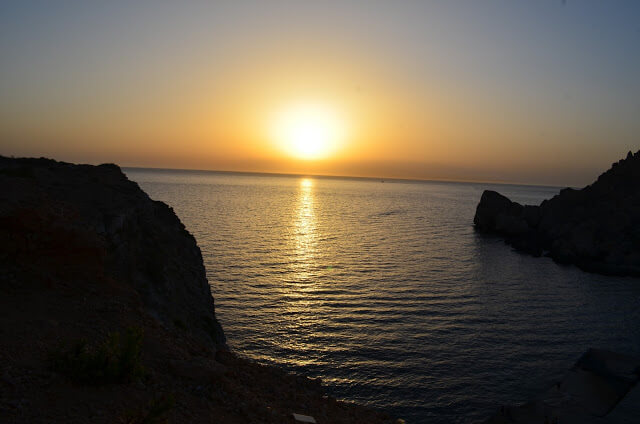 Returning to Bugibba we went for a walk on the avenue by the sea again for a few pints of beer in the Cheeky Monkey Gastropub Qawra, a great pub with good drink prices.

Bugibba is one of the most famous ballads of the island and very well known in Europe to have in other cities Café del Mar of Malta, this ballad in Malta has an infinity pool and have feast day and night. 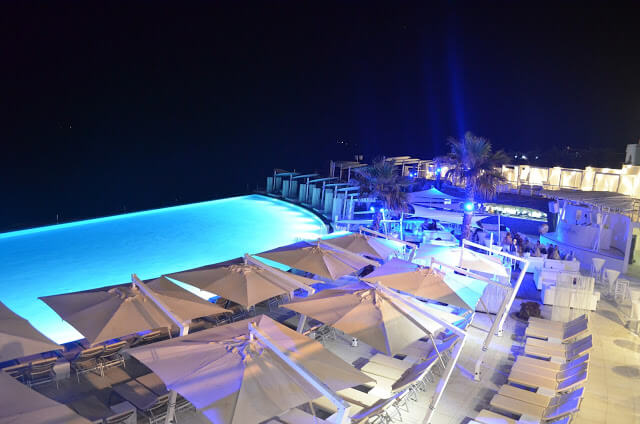 3Day we went to a stone beach called Ghar Lapsi Divesite, a very different place but pretty much did not stay long because there was no room, but it is worth going over there to take a dip in the clear and clean sea site. 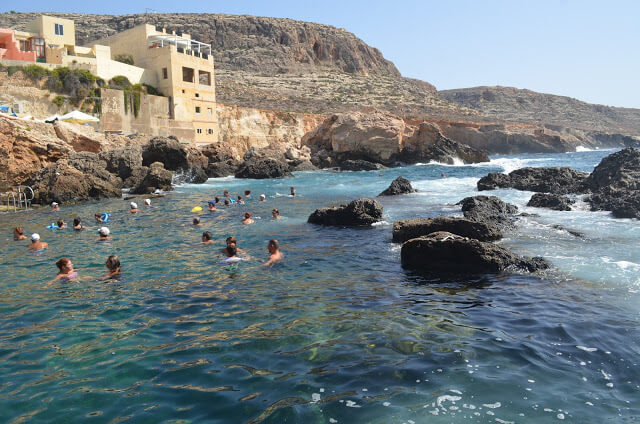 The second stop was at the Blue Grotto or Blue Wall, before we passed some old towers Qim e Watch Tower stones.

A Blue Grotto a beautiful arched rock formation over the sea, and inside the arc spend sea waters, It is very beautiful can not describe, you better get an idea from the photo below. 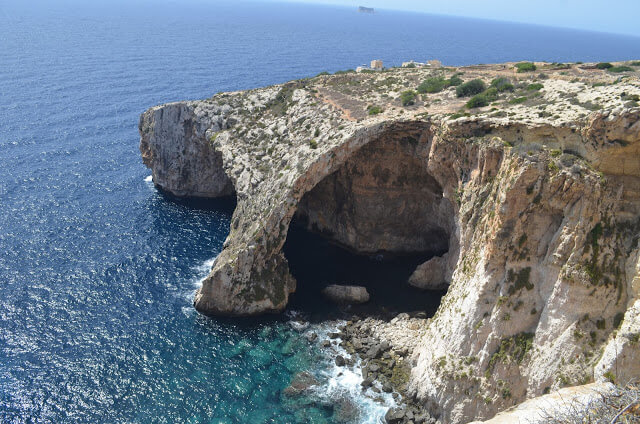 Continuing the day it was time to pick up a beach and nearby is a beach that seemed to be very beautiful because of some pictures we saw and because of the beach name Pretty Bay, but it is not as pretty as well, because in front of the beach is the main port of the country, the beach and water are beautiful but the view of the harbor disturbs some. 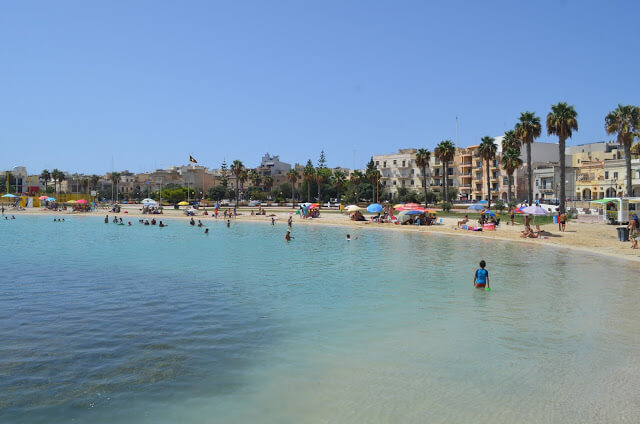 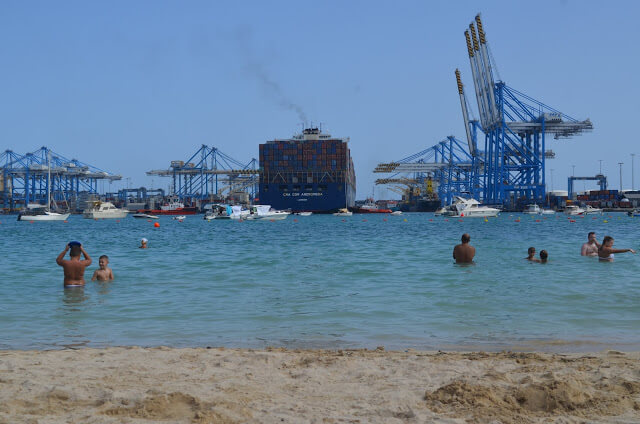 There did not stay long and went to a small town there the beautiful side, a Marsaxlokk, a city with a beautiful seaside church (Marsaxlokk Parish Church) and a fair of fish. 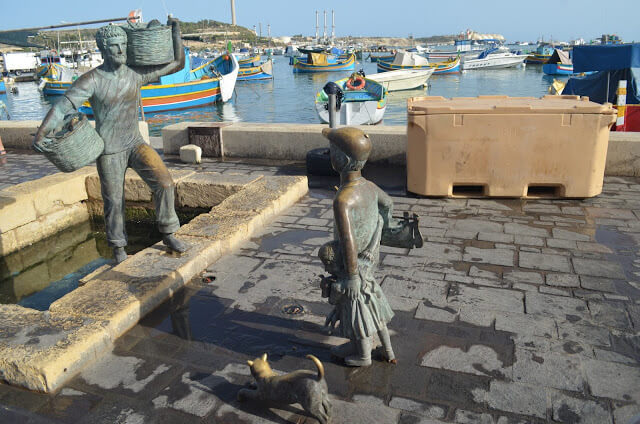 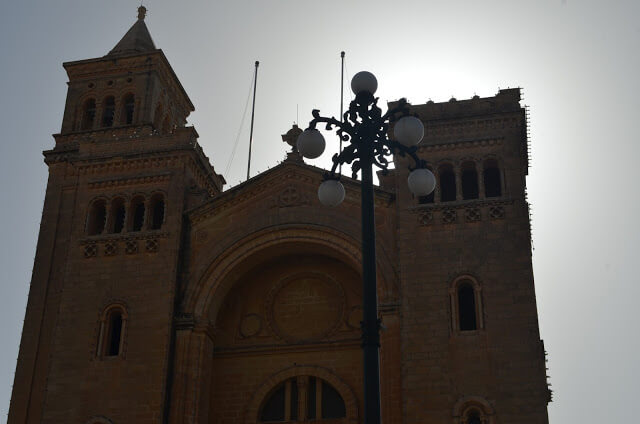 In this city is also the St. Peter’s Pool, a stone beach, with a natural pool and free for you to jump into the sea, We love this place and we were a good time there, even they had a Brazilian recording a video about the country and about this place, It looked like it was filming that show Band of the world according to Brazilian. There also say it has a very famous dog in place, who is always there, as well as the Pelican Mykonos, but not the dog got lucky and did not see. 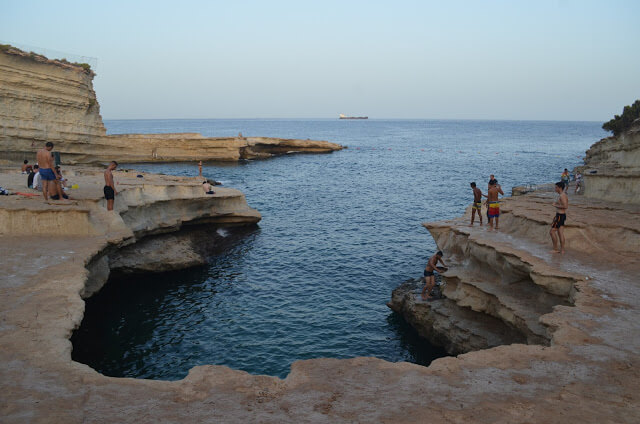 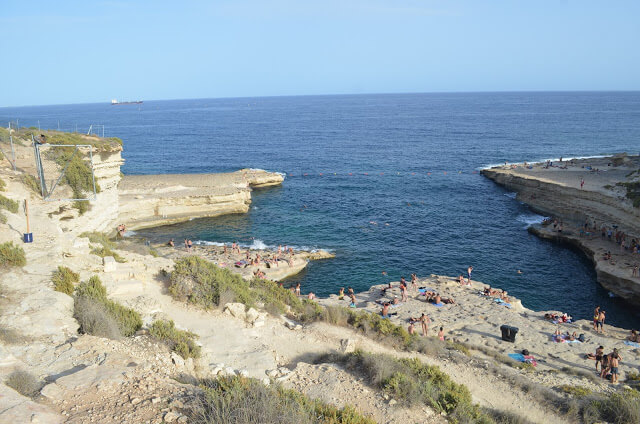 On that day we took the sunset on the road and went to dinner the night Valletta a capital of Malta, We take the opportunity to know the city at night, want to know more about Valeta click here, then returned home. 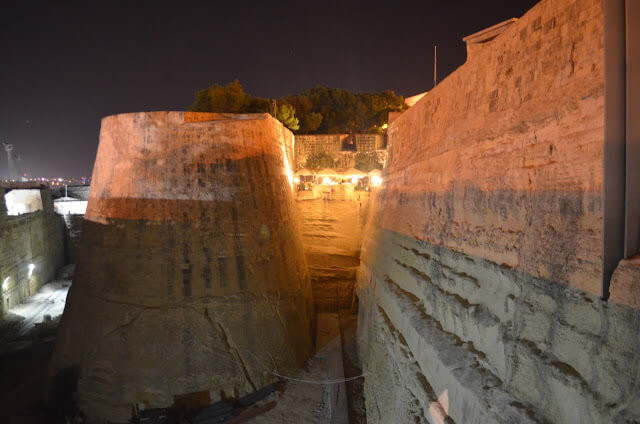 That was the first part of our screenplay by Malta – Attractions 7 days. As the post was too big split into two parts, see the second part here.

He feels like traveling after so many tips? The Blog TurMundial gives you even more tips to ease your travels: Want to book a hotel? Book hotels with great prices by Booking. Want to book an apartment, home, boat or even a tree house and still win 100 real in his first stay? Book all these and many other choices of places with great prices by Airbnb. Want to buy advance tickets for various attractions and tours without those huge queues? Buy Ticketbar Want to rent a car? Undoubtedly indicate the Rentcars.com it seeks the best cars and market values. You need to send or receive money to / from abroad, without paying those absurd charges of bank or exchange houses it Wise You want to avoid problems in the middle of his long-awaited trip? Hire a travel insurance with any of these companies Real Travel Insurance, or insurance Promo You want to avoid those sky-high mobile bills at the end of his international trip? And yet able to do, receive calls and use the internet? Buy an international phone chip with any of these companies: OMeuChip or with the or with the OBS: We emphasize that the responsibility for providing the services / sale and delivery of products, suppliers are described above.
CategoryEurope Things to Do in Malta?
TagsAzzure Window Blue Hole Blue Lagoon Buggiba Carvenas Caves Medieval cities destination RBBV Europe Malta Mdina Things to Do in Malta Malta Beaches Script helmet St. Julian Valletta

2Th part of the script by Malta – Attractions 7 days?