A travel dream, cruise to the Greek islands

Who has not dreamed of knowing the Greek islands aboard a cruise? We had a great desire to know this paradise, and since 2015 when we moved to Europe, this will tripled, It took a little (2 years), but this year we finally realize that dream!!

during these 2 years we looked wildly all promotions, scripts, all cruise companies that make Greek islands.

Here already are some tips for choosing your cruise: some companies make several islands in one trip, which is very cool, the only problem is that the ship is very little downtime, and so you can not know the whole island, An example, I had a cruise that was 3 Islands on the same day, swear!! We do not believe when we saw, they were the only 2 a 4 hours on the island which is very little time, We saw others who arrived on the islands at night and in the morning they left, how can you know such a Island?? So pay close attention to the route of your cruise and how long it will be anchored on each island.

another tip, there are several output ports that make the path of the Greek Islands, that are: Athens, Venice, Genoa, Barcelona, Marseille e Málaga, these are the main ports that have cruises leaving for Greece, choose the best for you. 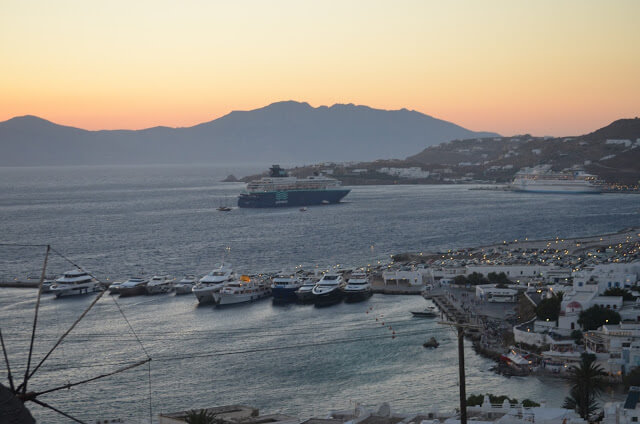 This tip think is the most important, when we were buying the trip, we saw a promotion on the site Pullmatur Spain, the promotion also had on their website in Brazil, as some readers already know, We live in Barcelona, but we have credit card only in Brazil, ie to buy on the site Pullmatur Spain had to pay in addition to the cruise the blessed IOF (6,38%), then we very smart we think we will buy the site of Pullmatur Brazil, so we pay real and will not have the IOF, only…they are much smarter lol, to our surprise even paying the IOF caréeeesimo, Spain buy at the site was “only” us 50% cheaper to buy the site of Brazil, then gets the hint, search on the company's site off Brazil, because you could pay a lot less.

With all that described above chose the cruise Pullmatur, they stopped at various Greek Islands, were a reasonable time each, I had included the flight to Athens and of course to have the best price, the only thing is that the ship was not the best, because it was small and a bit old but that was not what we were looking for, we really wanted to know the Islands, so for us it was great. We were a little apprehensive before we went as we have seen many complaints about them, but we love. And we still get an up grade and stayed in a cabin with window on deck 10, one below where was the pool, so for us it was perfect. 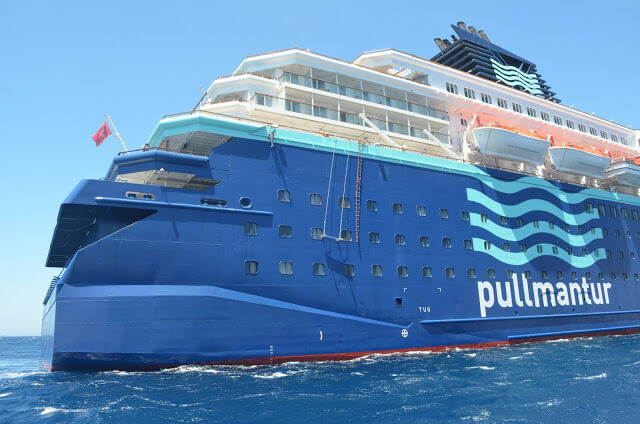 The Pullmatur Horizon ship that has chosen as the following charts script, with departure and arrival in Athens, the stops are 2 day in Island Mykonos, 1 day Chalk, 1 day Wheels (Rhodes), 1 Diana Patmos Island e 1 day Santorini, In total 8 days and 7 nights, in our package as I said above had still included the round-trip ticket by plane Barcelona-Athens and this cruise out meals, drinks are also included (beer, wine, sparkling wine, cocktails, water glass, glass refrigerant) which for us is perfect, still they had some packages with premium drinks and whiskey but then we would have to pay more 10 Euro per day, we find unnecessary.

With all this information you will now want to know how much we pay for the right cruise? The cruise cost per person 900 euros, plus airfare round trip Barcelona-Athens 100 EUR per person (optional), more 72 tip euros and service charges (mandatory), a great price, further to the month of July is high season in Europe. 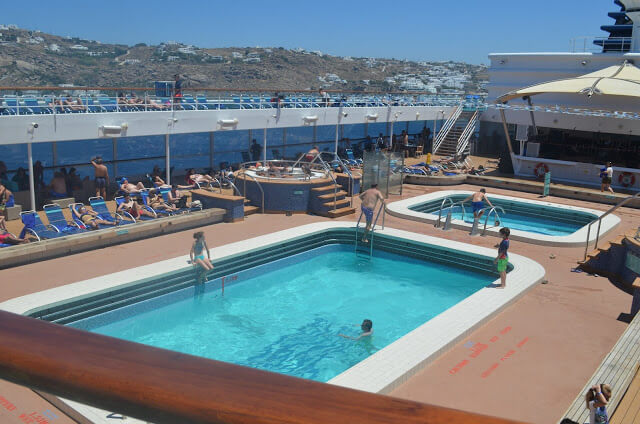 In this post we will speak briefly at a destination not to be a giant post, but in the coming weeks we will expand on each island and town we stopped and we know.

We left Barcelona early on the first flight to Athens, We got there at 11 am in the morning, Yes, they are 2 flight hours more 1 time zone for Spain, we buy all the Pullmatur, I had the transfer from Athens airport to the port of Piraeus, We arrived at the port checked in, we could leave the bags in the cabin and went to Athens. 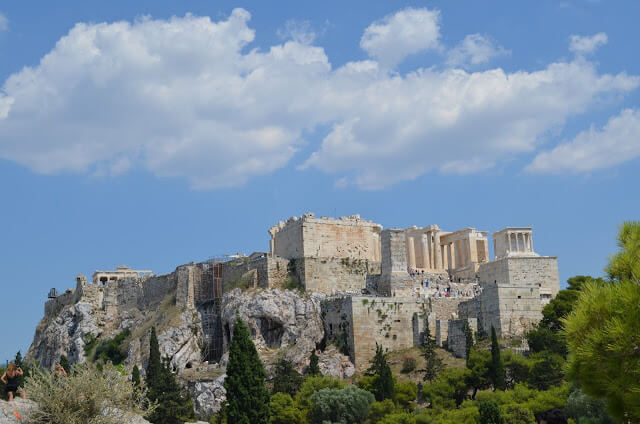 We had a few hours to get acquainted with Athens as the ship was leaving the port only ace 23hs.

From the port of Piraeus to the city of Athens, you can take a taxi, Metro or bus, the taxi wanted to charge 40 Euros to and found it too expensive, We decided to go subway 1,20 euros, the subway station is a 25 minutes from the port at Piraeus station is or Greek Πειραιά, and from there to the center of Athens are a 25 minutes, very quick, We stop at Monastiraki station which is next to all the main attractions of Athens. 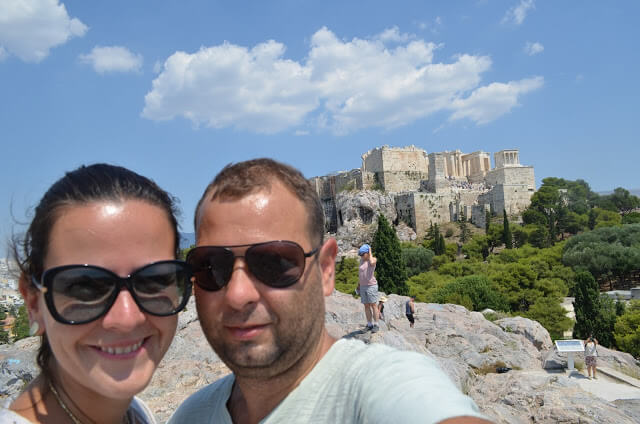 In Athens we went to visit the Temple of Zeus Olympic, the Roman Agora, a Library of Hadrian (Hadrian’s Library), the Agora of Athens and the whole complex of the Acropolis of Athens, and other less famous places like Arch of Hadrian, e o Choragic Monument of Lysicrates. 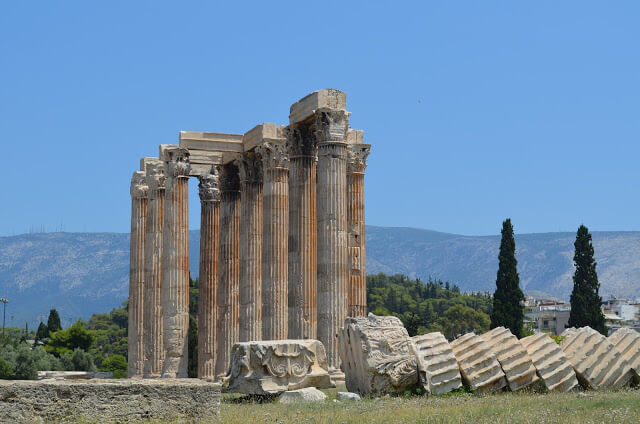 Athens is a city with so much history we read and learn in school, It is a magical place, pretty, all the best adjectives you can think of to describe a city, finally we love to know. 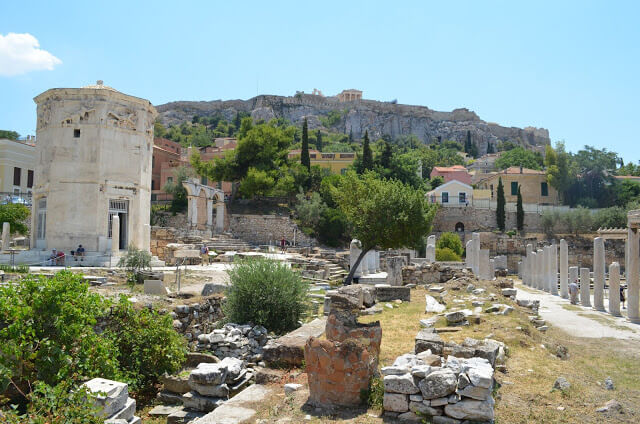 The Mykonos Island Famous, well known for famous ballads in Paradise and Super Paradise beaches, but not only that it has on the Island, and these two beaches are not the most beautiful, Furthermore the city is very charming, is the part of town called Little Venice, It has gorgeous windmills. 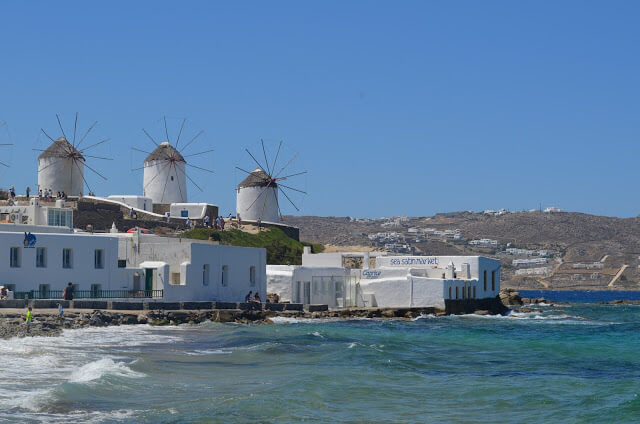 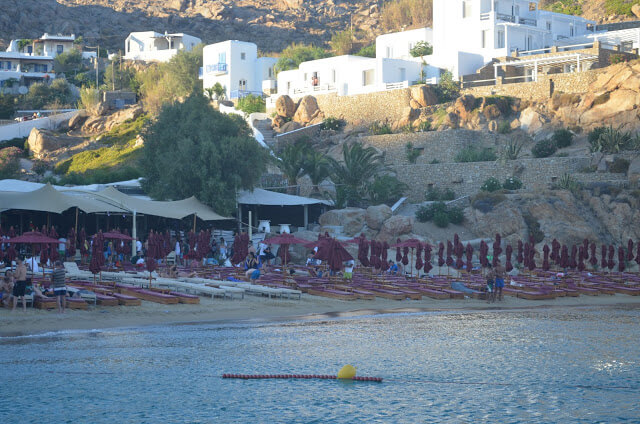 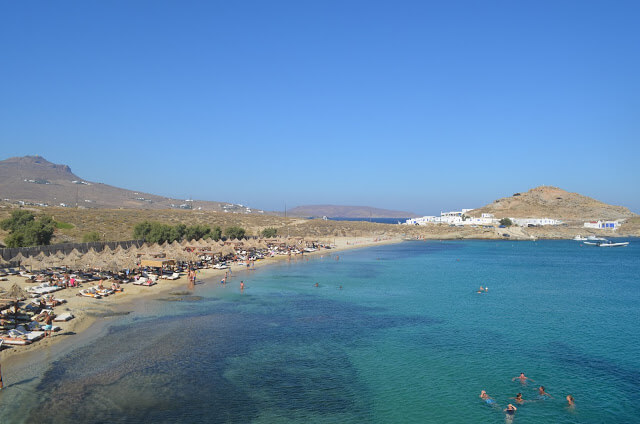 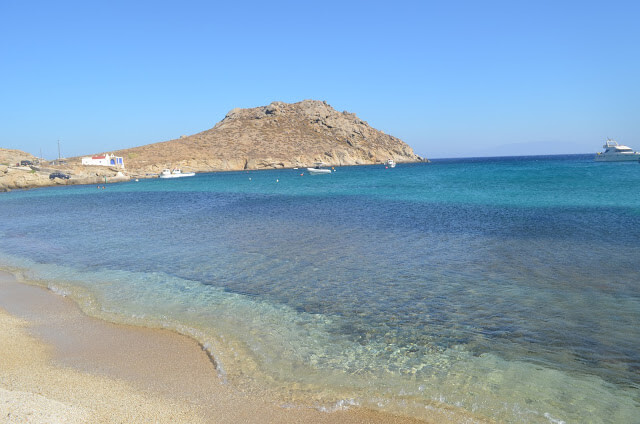 And even we saw a beautiful sunset, the sun going down into the sea and break with the backdrop of the white houses of Mykonos town, no need to say anything more right? Look at the picture. 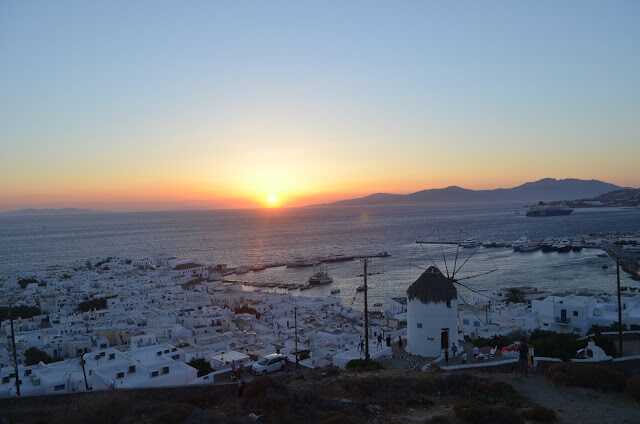 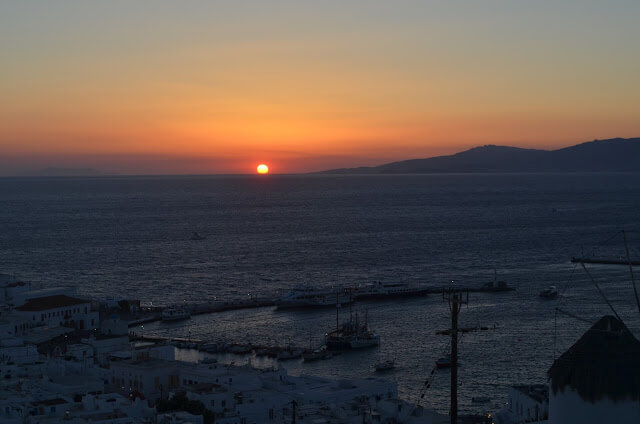 The largest island of Greece, It is from tip to tip more or less 250 km and a width of 45km, is an island that would have to be a 4 or 5 days to know, and the ideal is to stay two days on the west side and then change hotel is become 2 days on the east side. 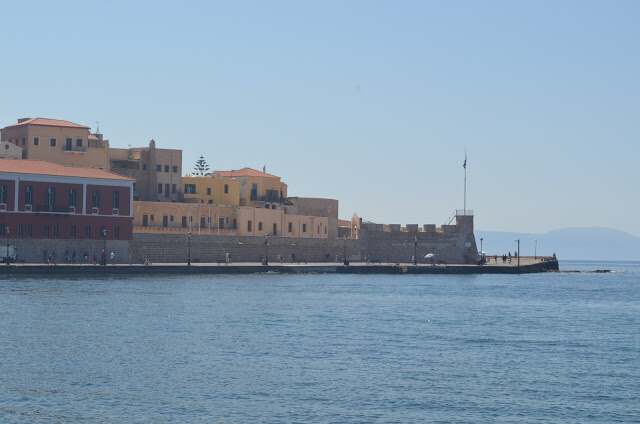 There is the palace of the legend of the Minotaur, has beautiful beaches more beautiful than the other.

As we only had a few hours, we focus on knowing the city of Chania, which is very close to Souda port where the ship docks. 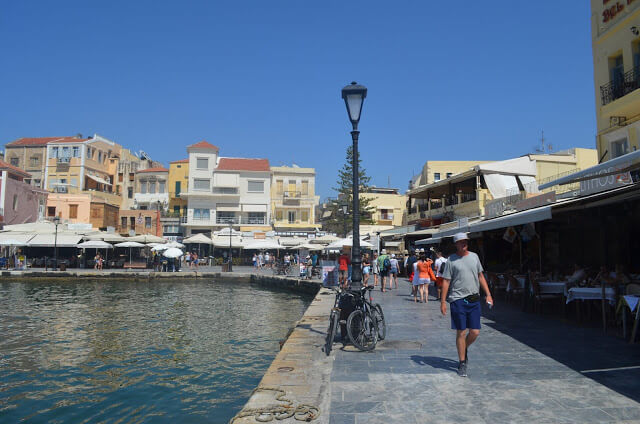 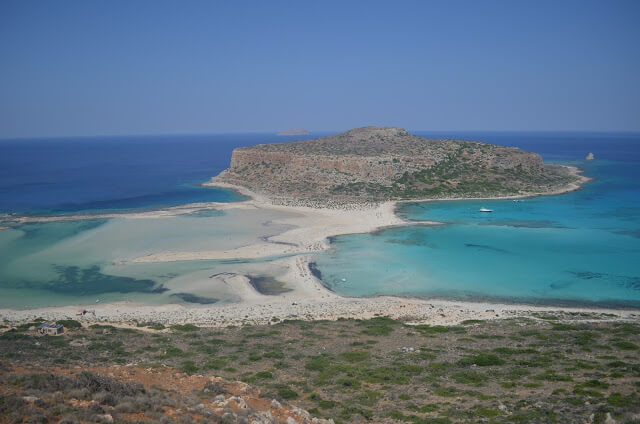 Rhodes and Rhodes is an island that has a lot of history, the most famous of all is that there was the Colossus of Rhodes which was one of the seven wonders of the ancient world, a giant statue made of bronze all, which was in the port and the boats passed between her legs, but due to the earthquake that happened many years ago she fell into the sea and today only were the pillars that held her legs. 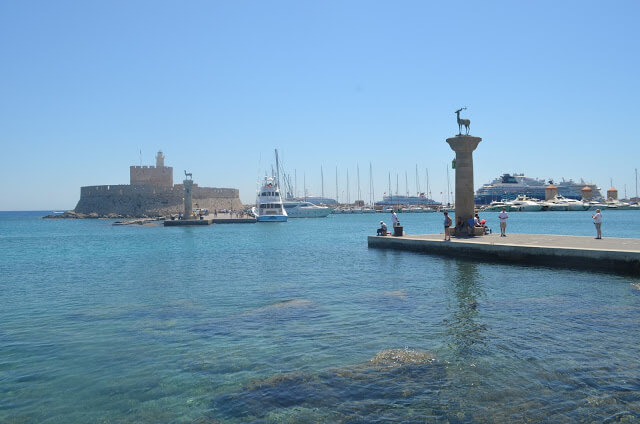 Also Rhodes is also a lovely medieval town, all enclosed with a beautiful castle and medieval streets. 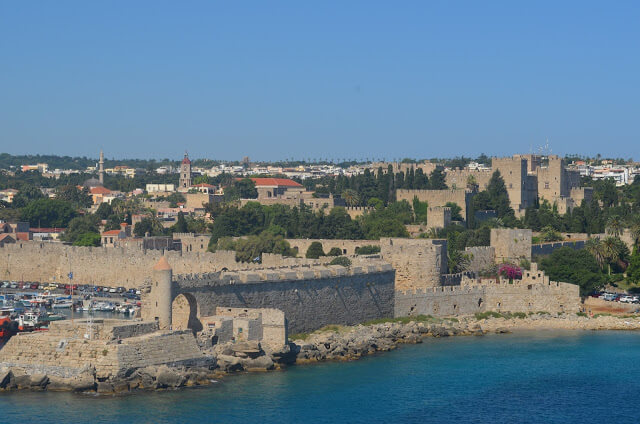 The smallest of the script Islands, but it means nothing, It is as beautiful and interesting as the other, has a great history in the past and also with beautiful beaches. 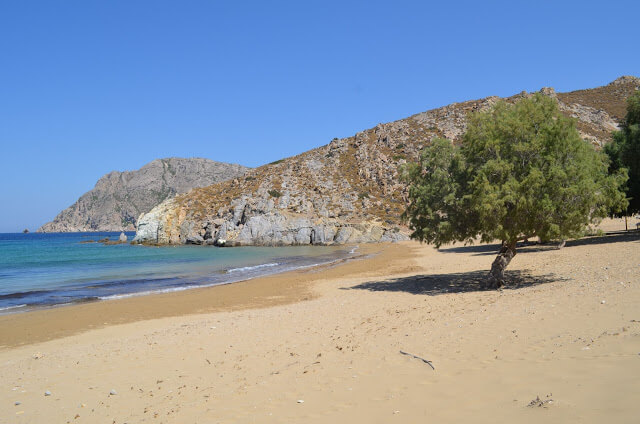 Patmos, It stands out for the cave and monastery of St. John, the apostle of God who lived there, and in this place he wrote about the Apocalypse, for those who like a lot of these stories that both places are special. 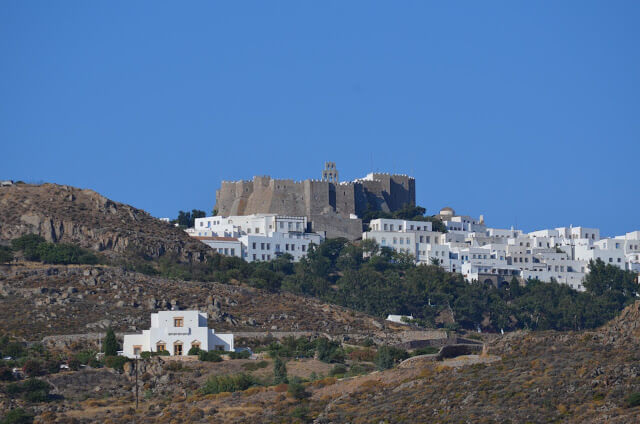 There is also a second beach we liked the trip, Beach Psili Amos, a beautiful beach almost no one, when we arrived they had only 4 people, even with a small bar is a place to enjoy nature and relax in the sea of ​​crystal clear blue water is a more secluded beach and the center needs to make a track a 30 minutes to get it. 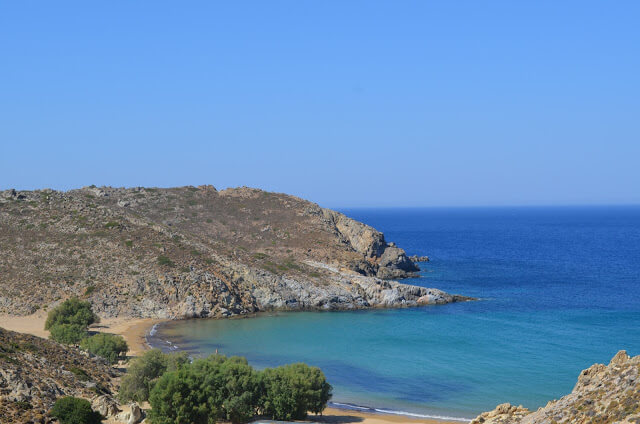 As Mykonos, Santorini is one of the most famous islands of Greece, I think the most famous postcard of the Greek Islands is the photo of the town of Oia with its white houses and blue roofs facing the sea. 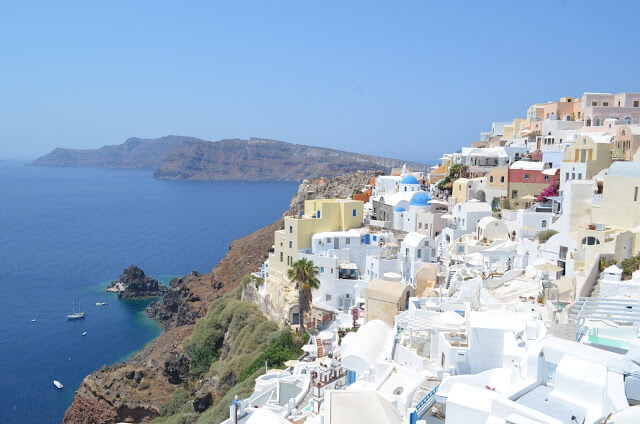 But it has not all there, also it has the city and port of Fira, which is in the same style of Oia. 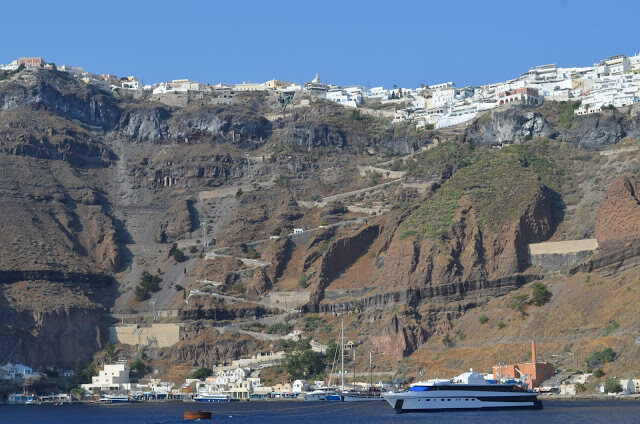 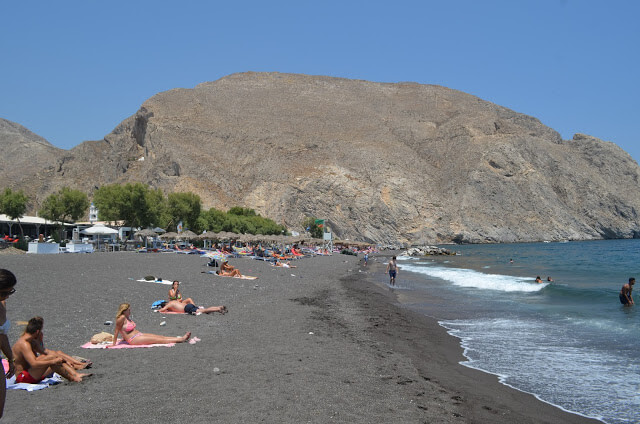 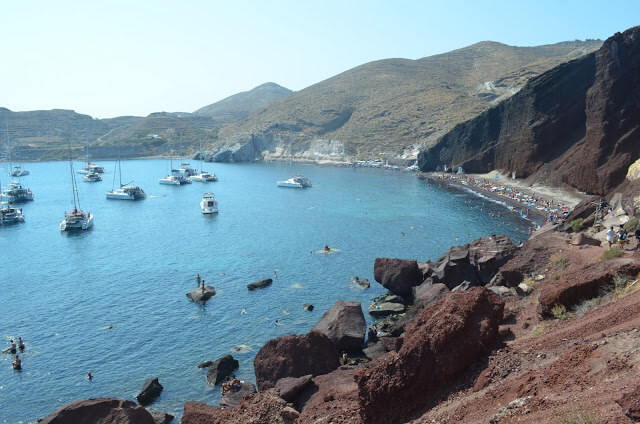 Last day, we were sad to leave, but very, very happy to have the pleasure to meet all these wonderful places.

Once we arrived in Athens we took the shuttle from the port to the airport, and bora again to our house.

Talking about the ship Horizon of Pullmatur, is a small ship compared to other cruises fit 1.800 people and 700 crew, and has a 30 years of life. 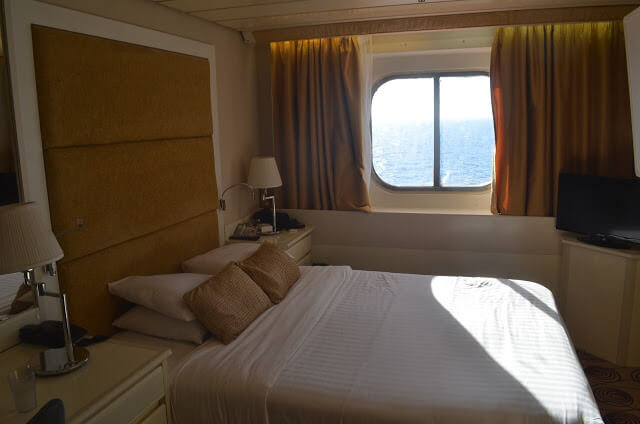 Like all cruise ships, It has a la carte restaurant, and other restaurants, buffets e grills.

In this script we had a few parties the night on the ship, as the white party, Hawaiian party and the traditional feast of the night commander.

On the outside it has a swimming pool for adults, childish, as jacuzzis, terrace and bar by the pool. 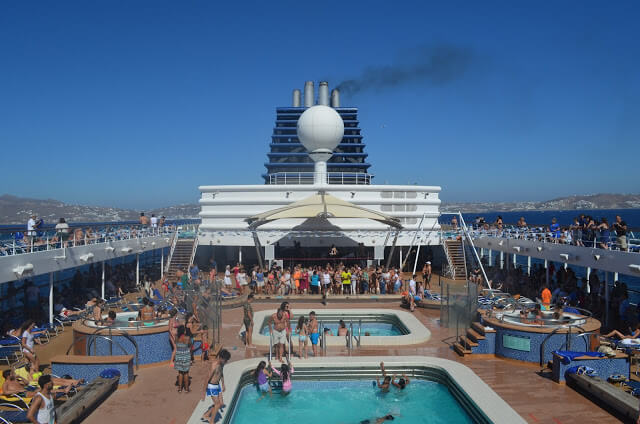 We can say it was not a trip to enjoy the ship equal to that We made between Brazil (Santos) and Europe (Barcelona) pela Royal Caribbean. But it was wonderful, We love you very much and super indicate to whom to ask.

We expect that we'll soon have the other posts this fantastic journey.

See the list of companies cruise to the Greek islands leaving Athens, We did a post with all the companies that make this script.